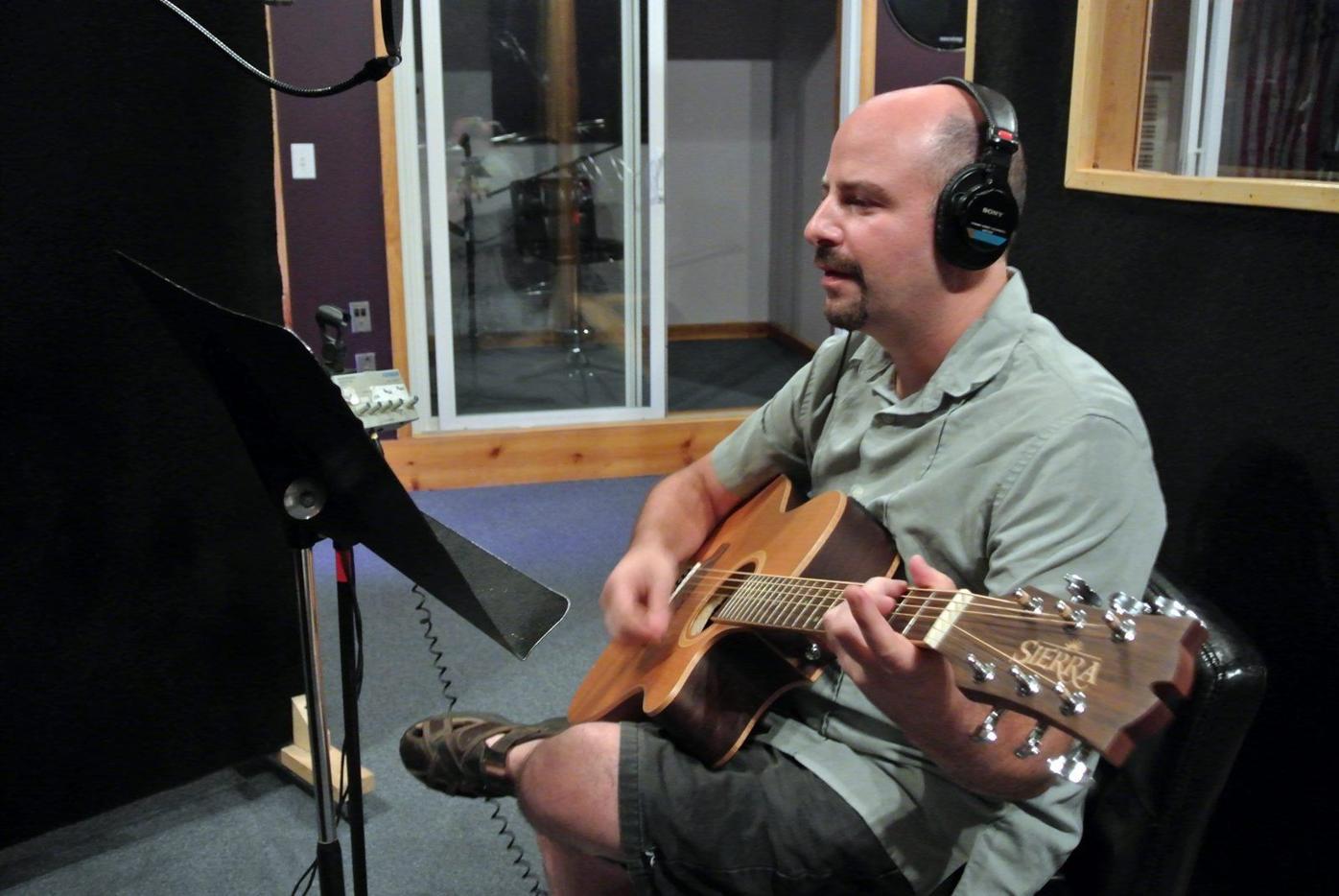 Antony Zwerdling, Lloyd’s voice teacher at the College of Southern Maryland, encouraged her to put together an album. He played guitar on the project recorded at Nightsky Studios in Waldorf. - Credit: Submitted photo 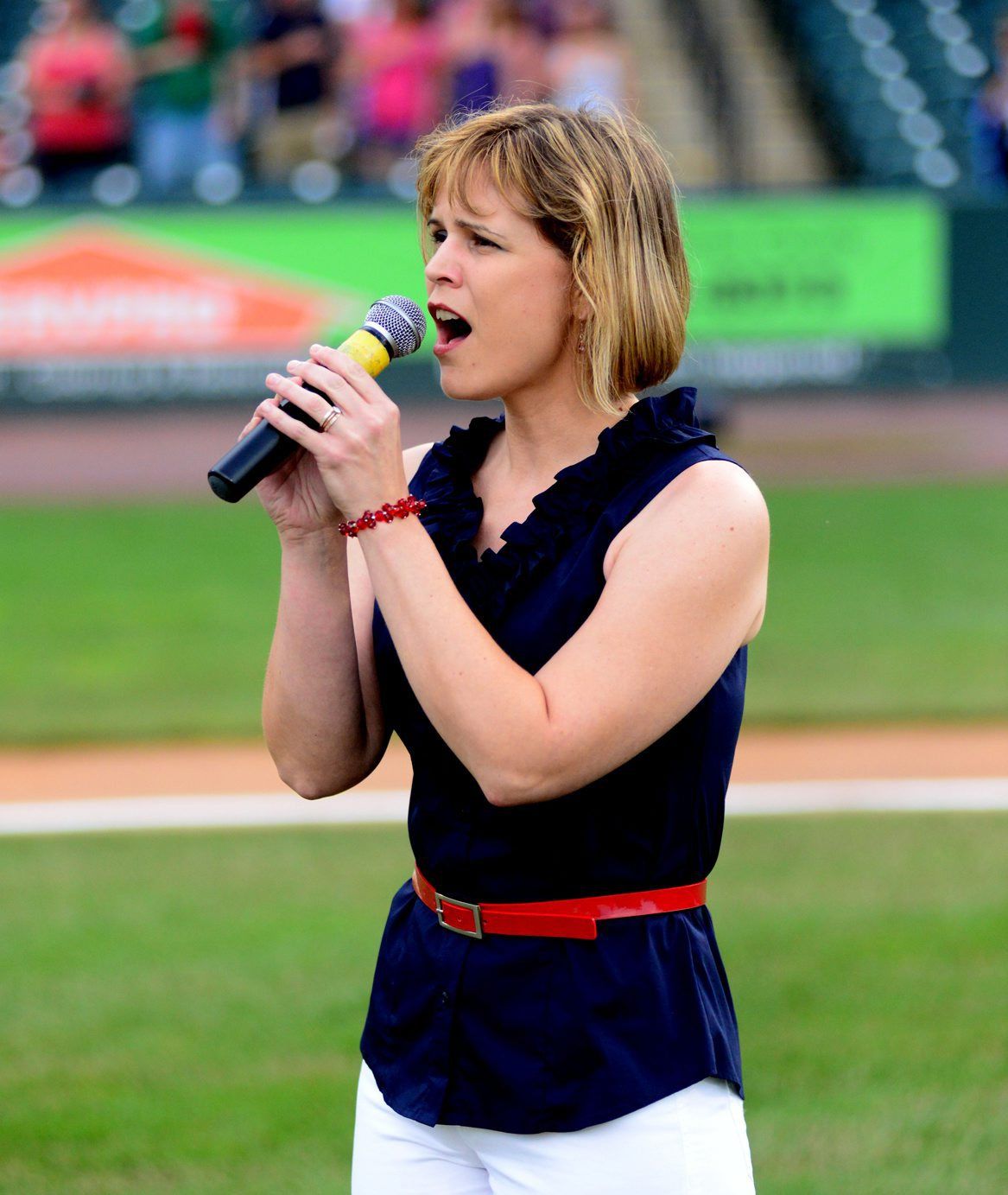 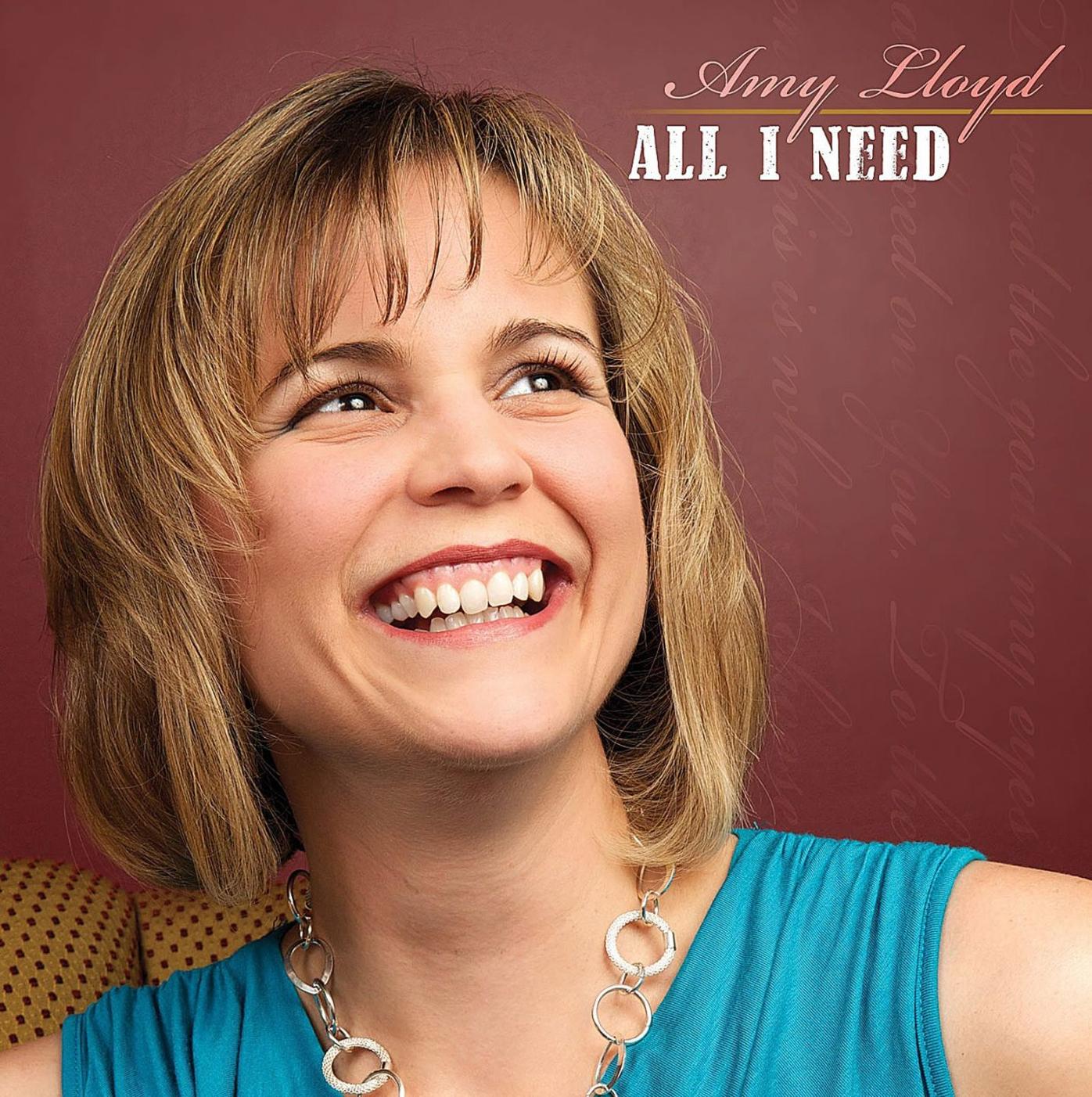 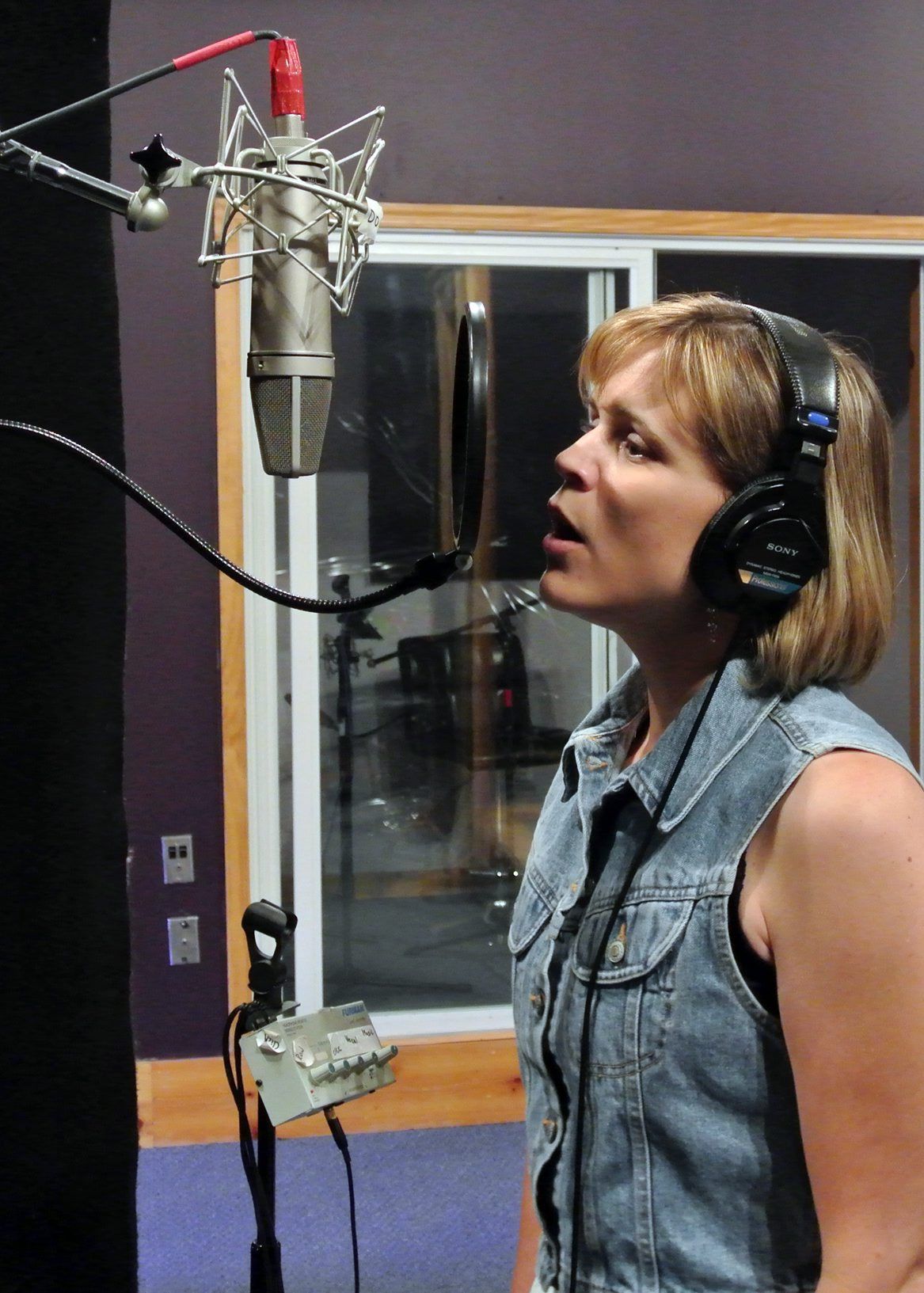 Amy Lloyd recorded “All I Need” at a Waldorf studio during the summer. - Credit: Submitted photo

Antony Zwerdling, Lloyd’s voice teacher at the College of Southern Maryland, encouraged her to put together an album. He played guitar on the project recorded at Nightsky Studios in Waldorf. - Credit: Submitted photo

Amy Lloyd recorded “All I Need” at a Waldorf studio during the summer. - Credit: Submitted photo

Amy Lloyd grew up playing flute and piano. She was a drum major in the high school band, but there wasn’t much singing. Wait, she did a solo performance in church once when she was about 6. Her grandmother, the church pianist, asked her to sing something for a Christmas concert.“It was ‘All I Want For Christmas Is My Two Front Teeth,’ I think,” said Lloyd, who lives in Cheltenham. Music was shelved further when Lloyd went on to study agricultural education at the University of Illinois where she met her husband, Matt, who majored in agricultural communication. After graduation, they landed in Maryland and both worked on Capitol Hill. Lloyd left her job to raise the couple’s children, Charlotte, 7, and Emmett, 5.Music came back into her life much how it did when she was a child. She started singing in a praise choir in church and found herself enjoying it a lot. While she grew up listening to classic rock and some country music, Christian music started becoming her favorite genre, she said. “I really got into singing,” Lloyd said. “It all hit me. ‘Wait a minute, I’m a singer. This is what I’m supposed to do.’” During this time, she heard a sermon that asked “What is the one thing you do for God that you would be miserable if you are not doing it?“For me, that is singing,” Lloyd said. With her kids in school full time, Lloyd decided she could do a few things for herself. She signed up for voice lessons with Antony Zwerdling at the College of Southern Maryland, who also teaches music history and music theory on the La Plata campus. “I wanted to be better, be better for God,” said Lloyd of her decision to work on her voice. She also wanted to do something with her singing, maybe make a living from it and talked with Zwerdling about it. He sensed her frustration but knew it could be difficult for someone to make money singing. Zwerdling suggested she record a CD. It could serve as a resumé of sorts and show that Lloyd was serious about pursuing singing as more than a hobby. She liked the idea. It was a new one for her. “It’s not like a lifelong dream of mine to make an album,” said Lloyd, who was spending time doing custom sewing work, some consulting and working with a direct sales company.“I was doing all these things good, but not doing one thing great. I was spinning my wheels.” The album idea focused her. She already had a list of songs written down in a journal — thinking she one day might perform a concert at church. The album idea overtook her, Lloyd said. “[Zwerdling] suggested it, and I ran with it.”At first Matt was hesitant. “This was uncharted territory for us,” Lloyd said.But as Charlotte was Lloyd’s biggest fan and Emmett along for the ride, everyone was soon on board. “They were really supportive,” Lloyd said of her family. She financed the project by selling some furniture the family wasn’t using anymore along with her kids’ old strollers on Craigslist, and through Kickstarter, a fundraising platform, she raised money to pay for studio time at Nightsky Studios in Waldorf.Zwerdling came along to accompany her on acoustic guitar, background vocals and keyboard, recording for three-and-a-half days, eight hours a day during the summer when their schedules synced up.“It was fun,” Lloyd said. “If I could, I’d do it again tomorrow.” She is the first of Zwerdling’s students to record an album, and he was interested in learning more about the recording process.He wasn’t very familiar with the folk Christian sound. “Not at all,” Zwerdling said. “I’m classically trained, and I’m Jewish.” Being in a professional studio was a new experience, too. “It was interesting to see the whole process unfold,” he said. Lloyd recorded 11 songs, most are covers, but two — “Me For You” and “Here is Your God (No One Else)” — were original tunes by a minister, Michael Andrew Foster. The theme of the album — God’s grace — started to come together. “I hope the music encourages people,” Lloyd said. The album is available on iTunes and Amazon and songs from it can be heard on Internet radio at Jango, www.jango.com.Internet radio is where a lot of independent musicians get discovered, Lloyd said. In the meantime, Lloyd has started teaching piano and voice at Island Music Co. in La Plata.She also is learning to play guitar at Zwerdling’s urging and is attempting to pen her own songs. “Antony really inspired me to do something really great,” Lloyd said. “I hope in teaching I can be that to somebody.” Lloyd, a native of Waggoner, Ill., a town that has a population of about 250 people, has been featured in the area’s newspaper and hopes to get her songs played on Waggoner’s radio station that broadcasts the farm report, high school sports and gospel music.“People where I’m from don’t think to do these things,” said Lloyd, who has heard from people she knew in Illinois that they were surprised she put out an album. She said she will continue taking voice lessons. “It’s a lifelong learning experience,” Lloyd said. “There is always something to learn. With singing you never really arrive. You’re always working and learning.”If another album or songwriting is in her, she’ll wait and see. “I’m waiting to see what God does with it,” she said. “I think we all have more in us than we believe.” staylor@somdnews.com