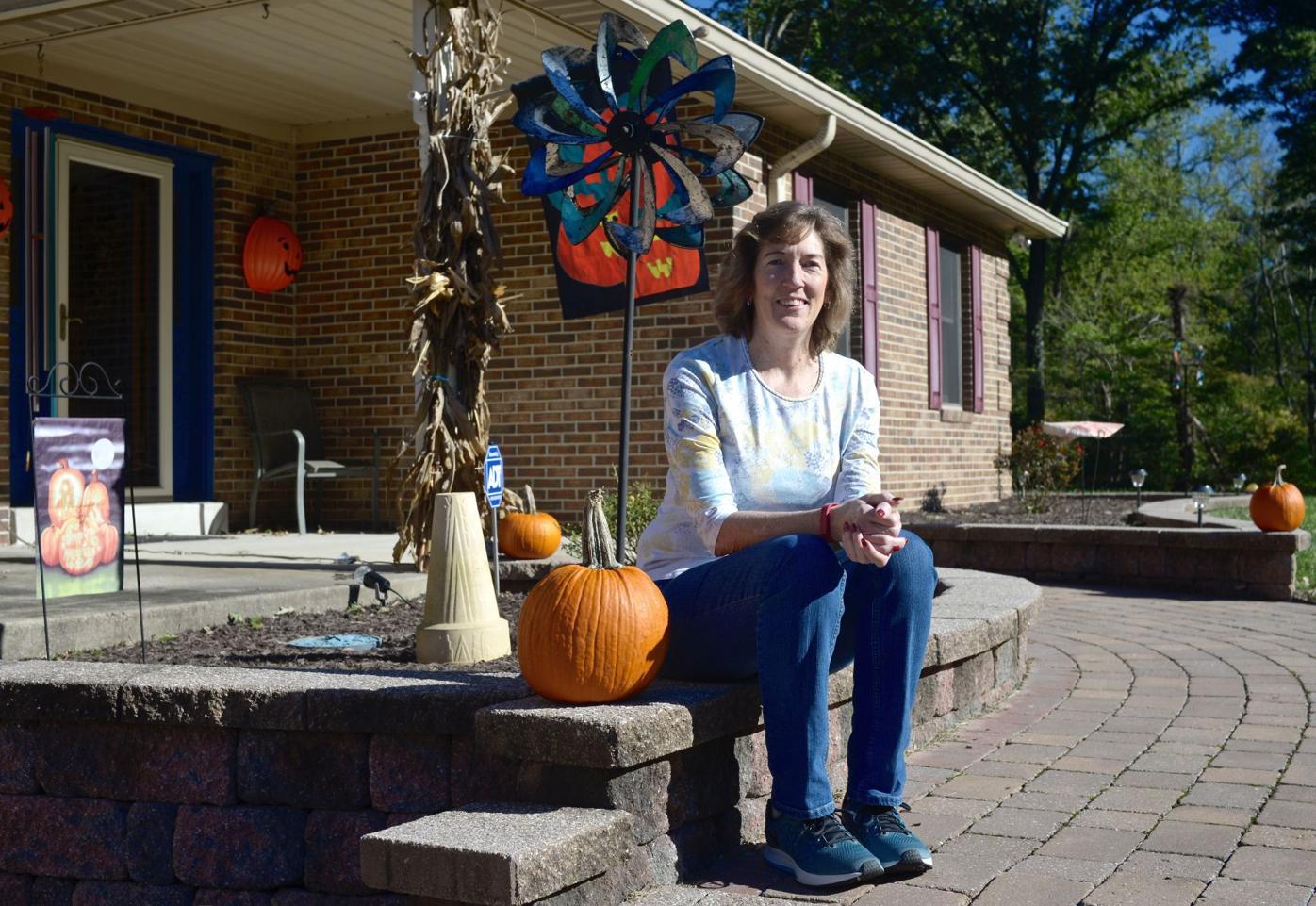 Karen Navarro of La Plata had her right ankle replaced a year ago after more than 20 years of pain and is back on her feet. 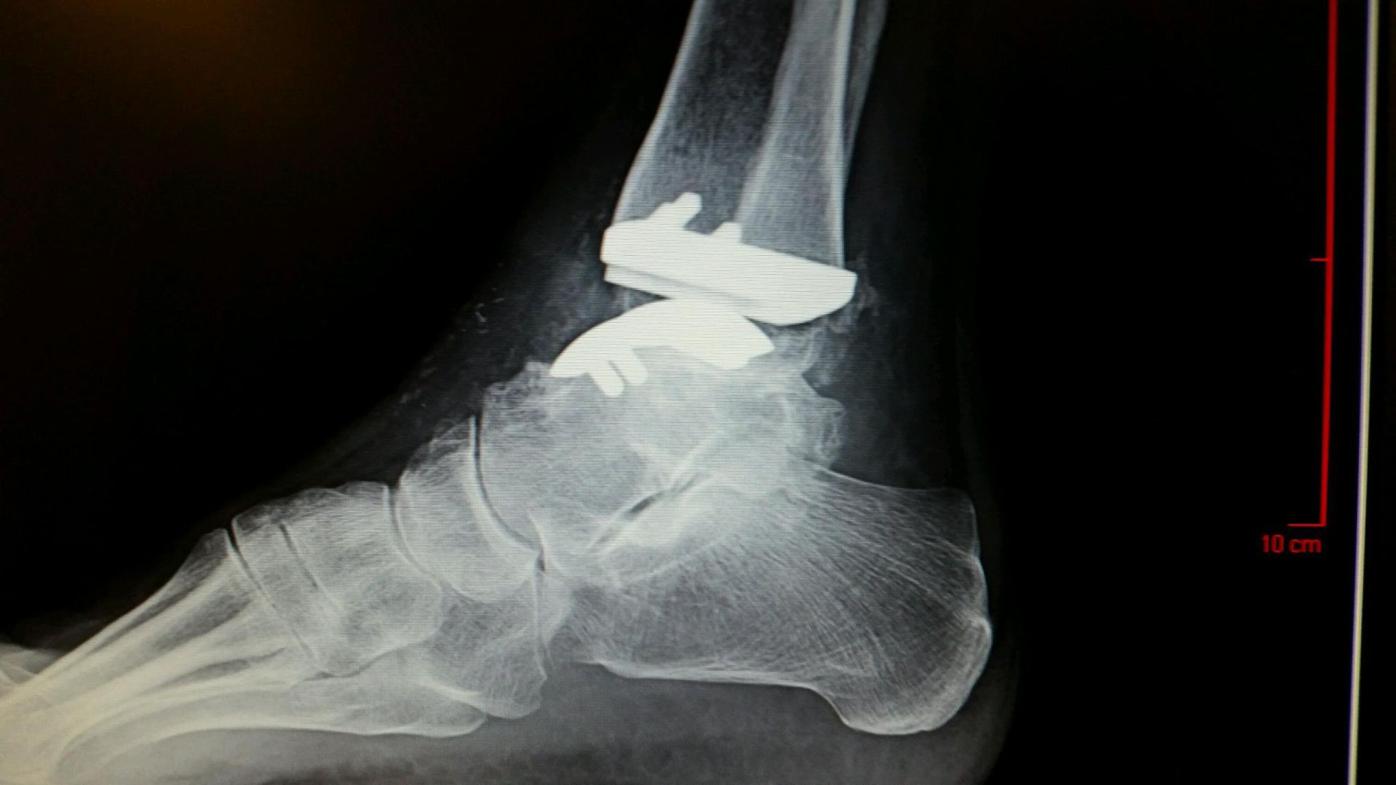 This is what Karen Navarro’s new ankle looked like in an X-ray after surgery.

Karen Navarro of La Plata had her right ankle replaced a year ago after more than 20 years of pain and is back on her feet.

This is what Karen Navarro’s new ankle looked like in an X-ray after surgery.

Karen Navarro spent more than 20 years putting up with ever-increasing pain in her right ankle, eventually giving up playing softball four years ago at the age of 50, something she had done all her life. The discomfort was unbearable.

“I just couldn’t take the pain anymore. It just hurt too much,” she said about giving up softball.

“I probably hurt it years ago running around the bases,” Navarro added. “I slipped on a wet base, and that’s what started it.”

The La Plata woman said ongoing pain started keeping her from other, lower impact outdoor activities that she enjoyed, such as wandering around car shows and festivals, going for walks and working in the yard.

“I’d have to walk for 10 or 15 minutes and then look for a place to sit,” Navarro said. “I always had an ankle brace on. I had to make sure I was wearing the right shoe [because of the swelling].”

A little over a year ago, she went to see her doctor about increasing knee pain in her left leg and was told that the pain had come about from the way she walked when favoring the painful ankle.

“I walked so bizarre for 20 years that my knee started hurting on my opposite leg,” she said. “I thought, ‘Here we go, I’m falling apart and I’m not even 50.’”

Her doctor referred her to foot and ankle specialist Dr. Steven Neufeld in Falls Church, Va., who suggested she have ankle replacement surgery. She had resigned herself to having the ankle fused to immobilize it, so was surprised and excited to find out she might be able to regain full use. She signed on right away and scheduled the surgery for last October.

A year later, she’s walking around — and riding a bike — pain free, and is looking forward to retirement at the end of the year.

“I used to know when it was going to rain, and I don’t feel that anymore,” she said. “I can walk; I can’t play softball anymore — I can’t run on it — but that’s OK, I don’t have the daily pain. I can go for walks and work in the yard and do whatever I want. It’s just the best thing that’s ever happened to me.”

Neufeld, the founder of the Orthopaedic Foot & Ankle Center at the Centers for Advanced Orthopaedics, said in a phone interview that ankle replacements are much like hip and knee replacements but it took several generations of design and engineering to get to something reliable that could take the high load bearing of an ankle — seven to 10 times the body weight directly under the tibia. He said the first replacements were done in the late 1970s and into the 1980s, but they tended to fail too soon. Later versions improved steadily.

“The current generation has been out for the last 10 years,” he said. “They’re working much, much better. We think these are going to last a long, long time.”

The type that Navarro received has thick titanium plates and an ultra-high-molecular-weight polyethylene insert as the bearing surface. The bone in the foot is shaved down for the lower plate and a notch is cut into the tibia for the upper plate. Bone grows back in around the plates and anchors to lock it in permanently, though there is a two- to three-week period where no weight can be put on it. After that, weight is increasingly applied over days until the full weight can be put on without pain. Several weeks of physical therapy help rebuild muscles and get the patient walking properly again.

“It’s really life-changing,” Neufeld said. “The people who come and see me are debilitated. They’ve put on weight, they’re depressed and they’re getting out of shape.

“There’s no reason to live with foot and ankle pain,” he added.

Neufeld said the surgery generally takes an hour and a half but “it’s very complicated and difficult surgery. It’s got a steep learning curve.” Orthopaedic surgeons specializing in such work spend an extra year of training in a foot and ankle surgery fellowship.

He said the continuing success of the recent generation of implants has gotten more doctors interested and has contributed to a growing number of people walking around on artificial ankles.

“In 2016 we’re much more sophisticated and better at treating ankle problems,” Neufeld said.

Navarro, a long time IT specialist at the Naval Research Lab, is looking forward to an active retirement at the end of the year now that she’s back on her feet, and she wants everyone who suffers with ankle pain to know there is a solution.

“It’s a scary thing getting a body part replaced,” she said. “But your quality of life goes up. It’s work — you have to do the therapy, you have to go through all the doctor visits — but in the end, it’s well worth it. I’m healthy now, and I’m ready to retire.”