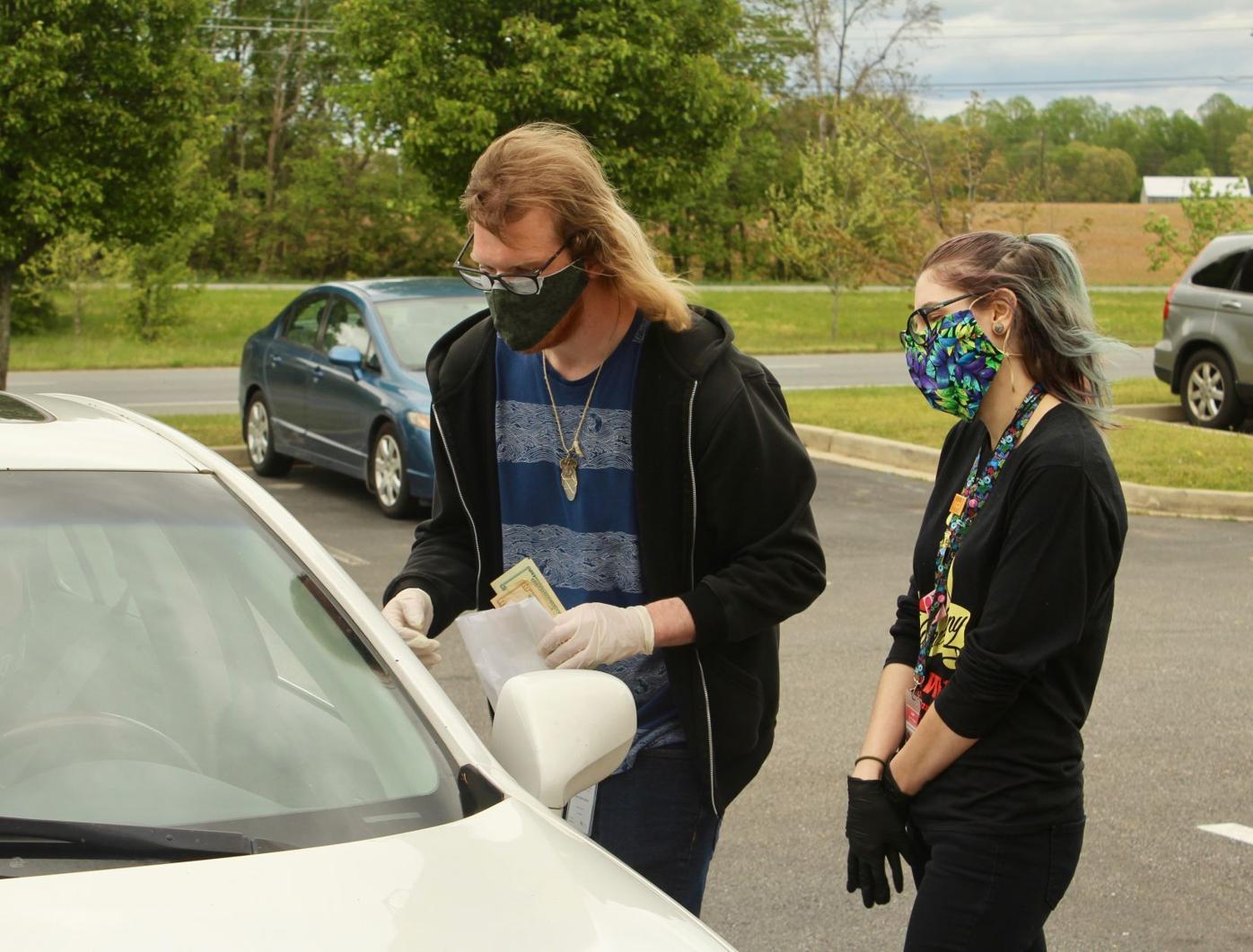 Daniel Emery, left, and Samantha Carpenter, employees at Southern Maryland Relief Medical Cannabis Dispensary in Mechanicsville, deliver a patient’s order to their car. Some operation restrictions were loosened in the state during the COVID-19 pandemic, and dispensaries are allowed to offer curbside delivery for patients and caregivers in their parking lot. 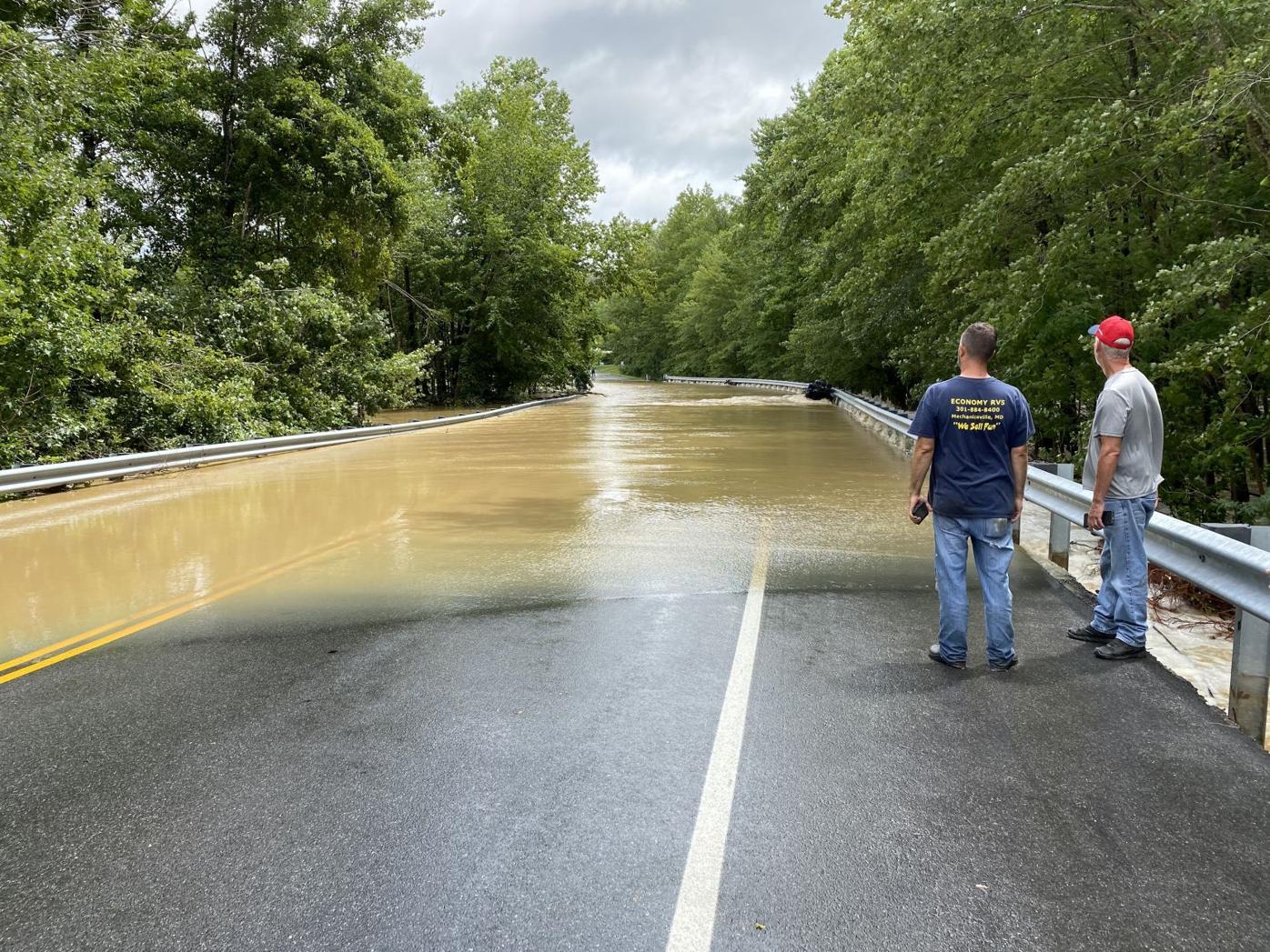 The Country Lakes neighborhood experienced some roadway flooding after a tropical storm in August. Asher Road was flooded for hours and sustained damage from the water. 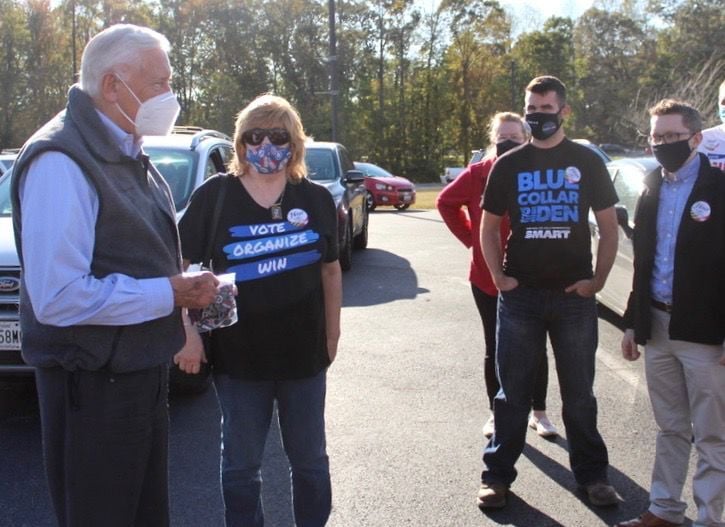 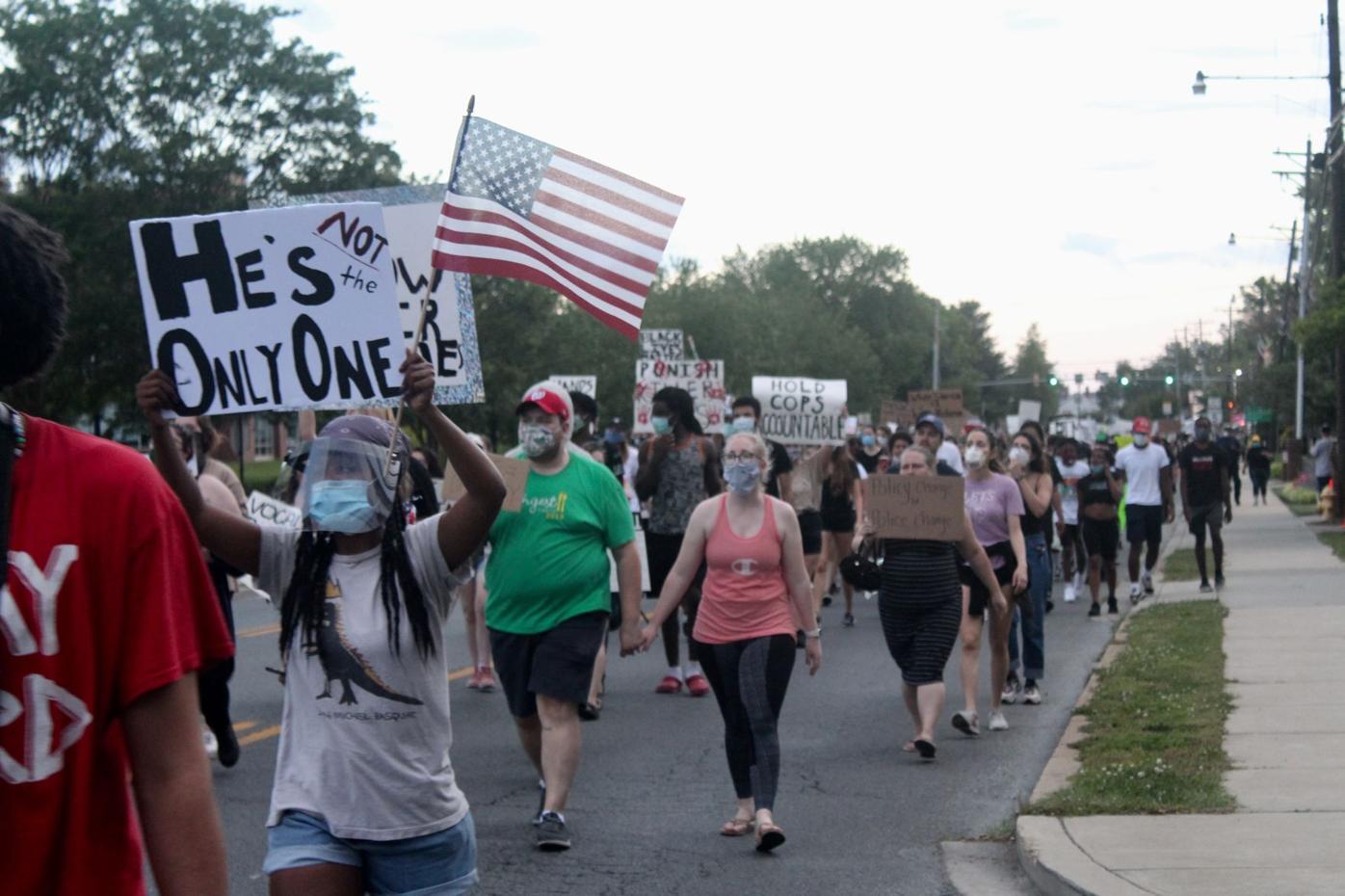 In August, peaceful protesters march out of the county’s governmental center in Leonardtown during a youth-led protest against police violence. 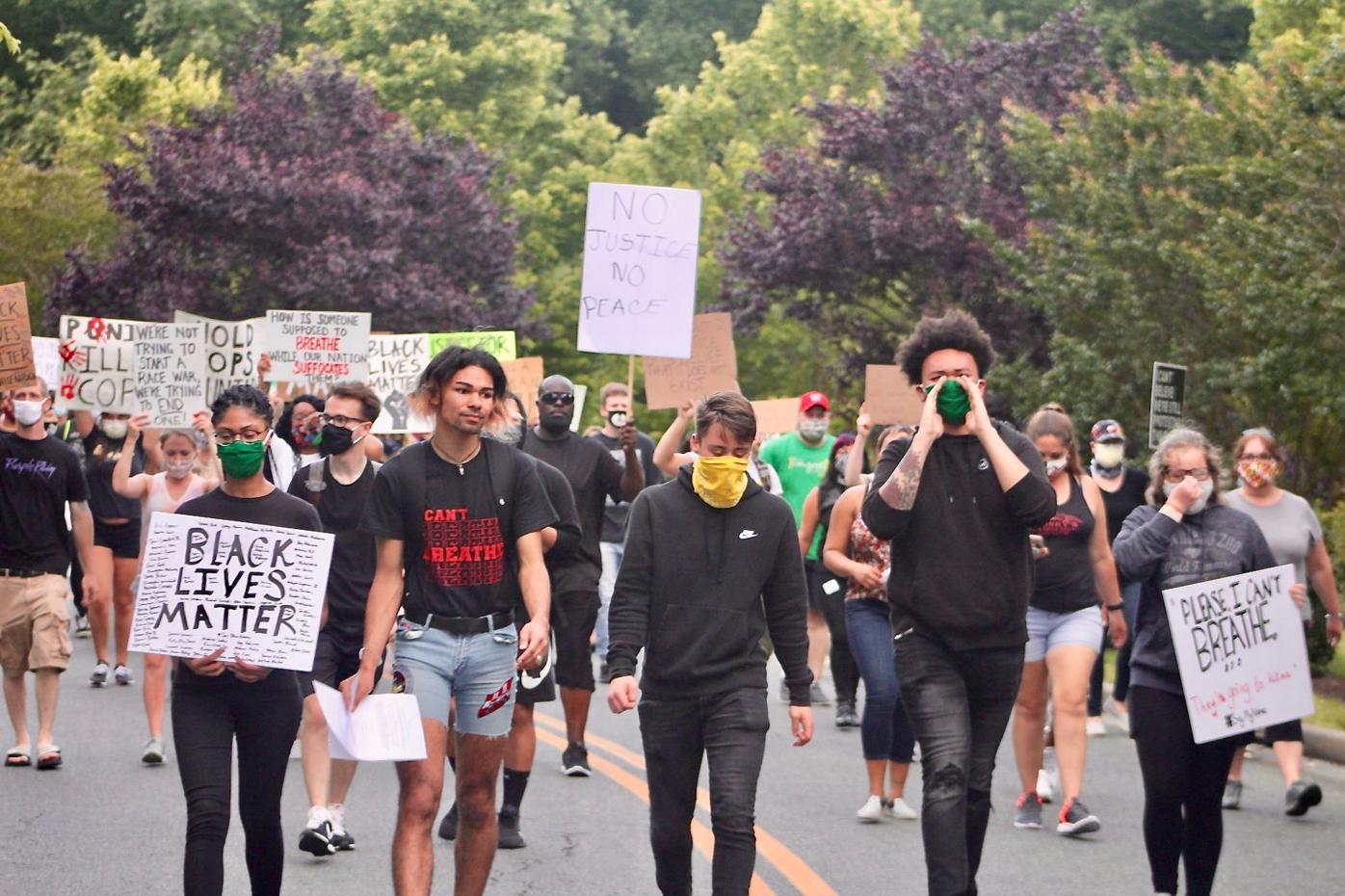 Peaceful protesters march out of the county’s governmental center in Leonardtown over the symmer in a youth-led protest against police violence. 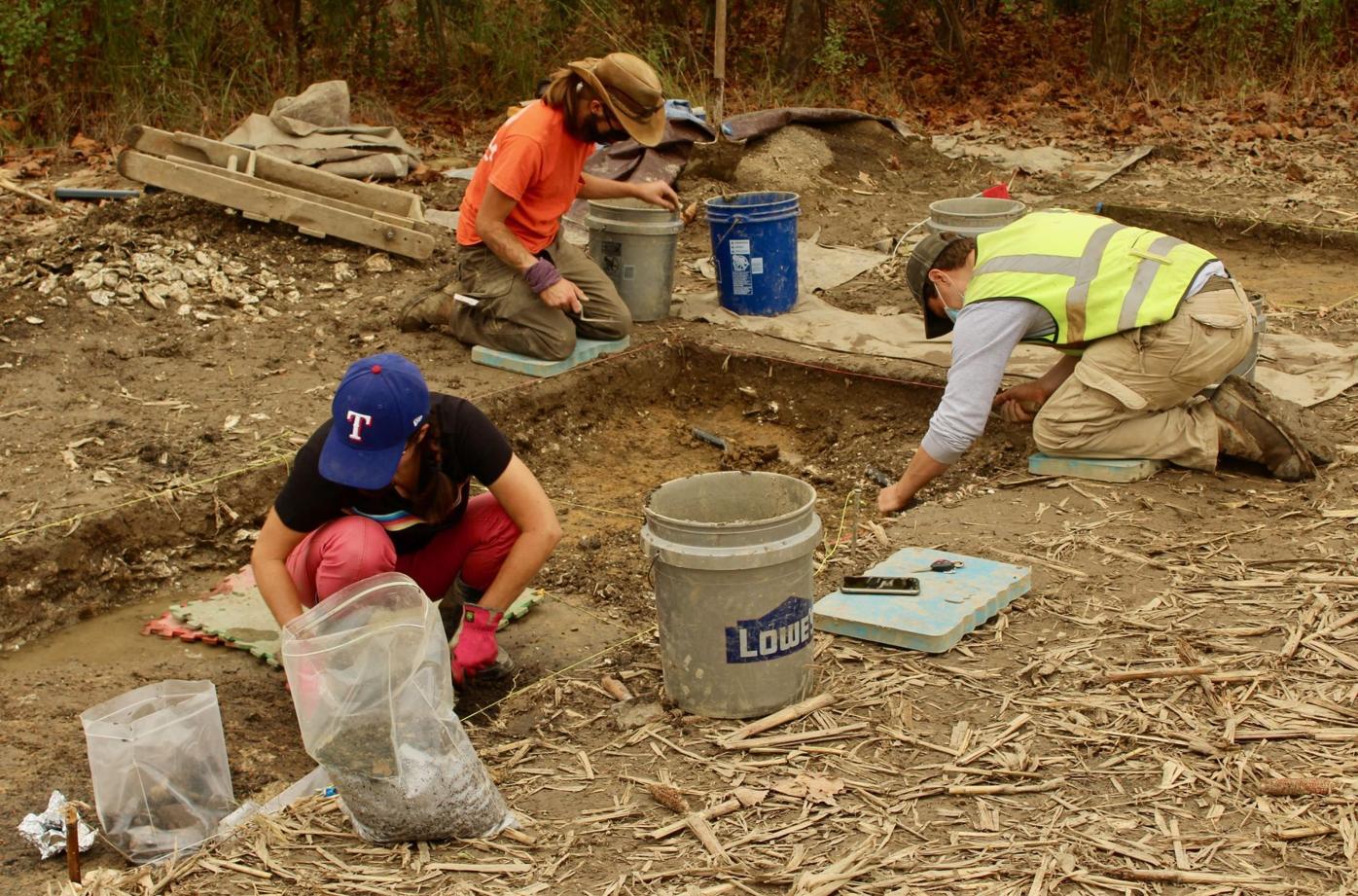 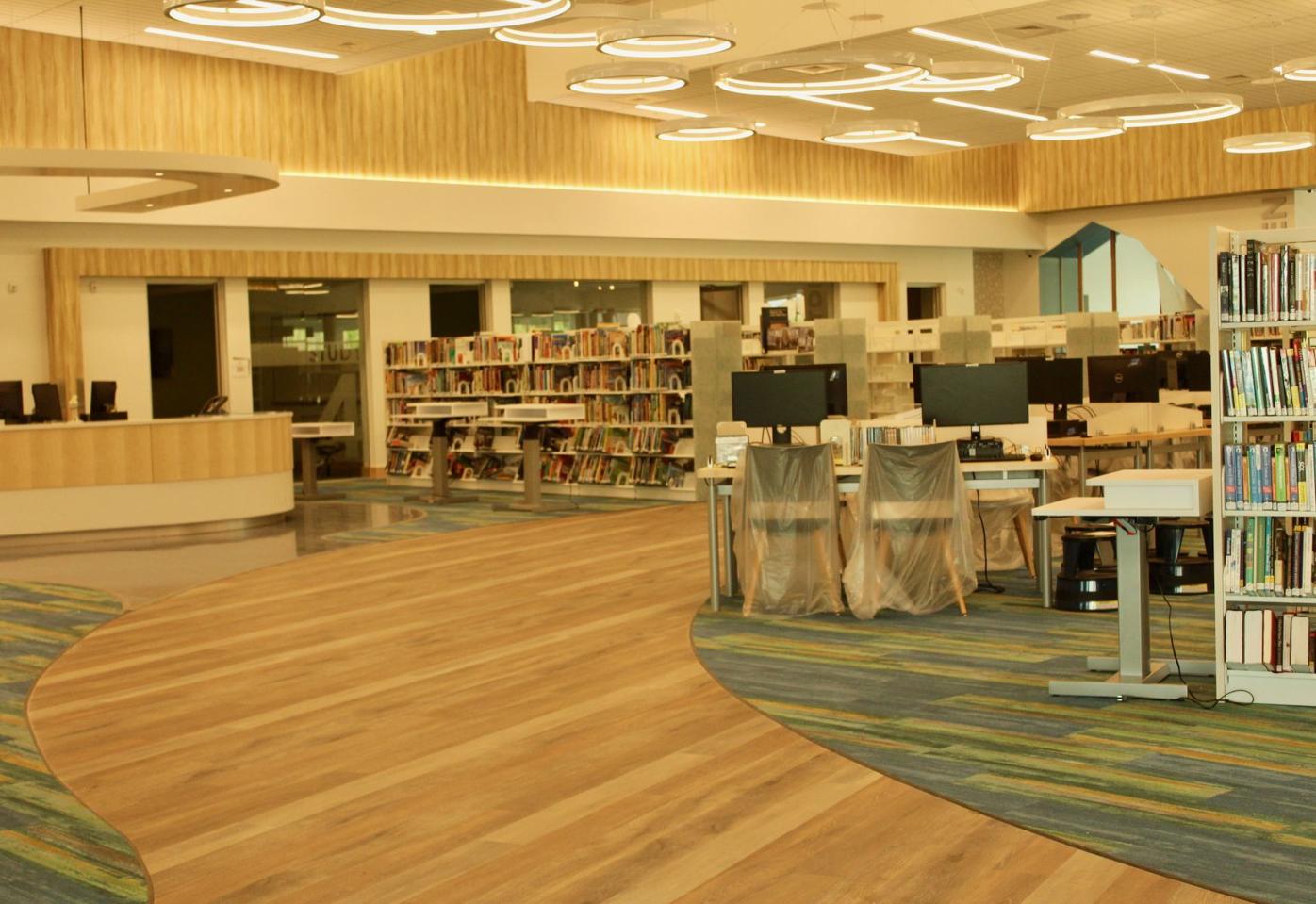 The new Leonardtown library features lower stacks, allowing easier access to books without a stepping stool, according to Micheal Blackwell, library director, during a tour of the new facility two weeks ago.

Daniel Emery, left, and Samantha Carpenter, employees at Southern Maryland Relief Medical Cannabis Dispensary in Mechanicsville, deliver a patient’s order to their car. Some operation restrictions were loosened in the state during the COVID-19 pandemic, and dispensaries are allowed to offer curbside delivery for patients and caregivers in their parking lot.

The Country Lakes neighborhood experienced some roadway flooding after a tropical storm in August. Asher Road was flooded for hours and sustained damage from the water.

In August, peaceful protesters march out of the county’s governmental center in Leonardtown during a youth-led protest against police violence.

Peaceful protesters march out of the county’s governmental center in Leonardtown over the symmer in a youth-led protest against police violence.

The new Leonardtown library features lower stacks, allowing easier access to books without a stepping stool, according to Micheal Blackwell, library director, during a tour of the new facility two weeks ago.

The past 360-some-odd days have resulted in an interesting year in St. Mary’s County, where residents experienced several unprecedented events unfold around them.

The coronavirus dominated the year, bringing about a stay-at-home executive order by Gov. Larry Hogan (R) in March, the cancellation of local events, such as the St. Mary’s County Fair and the U.S. Oyster Festival, and the shuttering of a number of businesses. While the COVID-19 vaccine reached St. Mary’s County at the end of December, it wasn’t before residents had to adjust to their new lives of mask-wearing in public and constant social distancing.

Limits were, and still are, placed on indoor dining and the capacity of public places such as parks and movie theaters. Many businesses introduced curb-side pick-up as a shopping option but some closed down completely, not able to withstand the financial hardship that came along with the virus.

Although the COVID-19 pandemic restricted many regular leisure activities, it also led to record-breaking numbers of attendance to Maryland state parks. In September, the Maryland Park Service reported a total of 17.1 million visitors in 2020 as of that time, already surpassing the previous record of 14.9 million visitors in all of 2019, with three months still remaining in the year. During peak season in July, state parks attracted 3.4 million visitors, compared to 2.5 million during the same time period last year.

St. Mary’s Commissioner President Randy Guy (R) said this week the coronavirus was “the biggest thing” for him this year, especially after he himself tested positive in August. He said the pandemic “put a damper” on the year and “slowed things down project-wise” as commissioners continue to be conservative with their budget, unsure how badly revenues will be impacted from the virus.

Despite some slow-downs, he claimed he was “proud” the county government has “continued moving forward,” and pointed out several big accomplishments, including completing a feasibility study for a YMCA in Lexington Park, opening up a new library and senior center in Leonardtown and providing internet connectivity throughout the county while children were forced to learn virtually and many adults worked from home.

The coronavirus wasn’t the only thing to hit St. Mary’s this year. In August, after Tropical Storm Isaias made its way through the county and flooded a number of roads, emergency services personnel struggled to access some locations, preventing crews from reaching residents in need.

After the storm, Stephen Walker, director of the department of emergency services for the county, told Southern Maryland News the most damage caused by the storm was to roadways. A number of substantial roads were down for several weeks, such as Route 242 near Chopticon High School, Route 5 near Margaret Brent Middle School, Morganza Turner Road between Point Lookout Road and Laurel Grove Road, and New Market Turner Road between Trent Hall Road and Parlett Morgan Road.

Residents are still waiting for the Route 6 Persimmon Creek bridge to open again. Since the damages to the bridge caused by the storm cannot be repaired, the state has been working to expedite design for a replacement bridge. Surveys and data collection were recently completed, and engineers are working on design and permit approvals to begin construction in 2021.

The Country Lakes neighborhood experienced flooding of Asher Road and Cox Drive, as well as Yowaski Mill Road, preventing access into or out of the large neighborhood for several hours immediately after the storm. Walker confirmed a report of a resident having a heart attack during the flooding while ambulances were not able to get to them and instead, a dump truck had to be brought in.

There was one fatal accident in the region directly related to the storm. On the morning of the storm, around 9:30 a.m., Tiaesa Sade Lake, 31, of Suitland was traveling southbound on Three Notch Road in the area of Charlotte Hall when a large tree fell onto the roof of her car, trapping the her inside, according to a press release from the St. Mary’s sheriff’s office. Lake was pronounced dead on the scene.

Through the chaos, the 2020 elections went on, including the race for Maryland’s 5th congressional seat in St. Mary’s. A record number of citizens turned out to cast ballots in the election, despite the COVID-19 pandemic and revised election infrastructure.

More than 159 million people, accounting for 66.5% of the eligible voting population in the country, cast ballots in this election, according to the University of Florida’s United States Elections Project. That exceeds the turnout percentages for the past 120 years, going back to 1900, when Republican President William McKinley won reelection with 73% turnout.

In Maryland alone, an estimated 3.1 million ballots were cast, with participation among eligible active voters in the state at 72.2%.

Some of the year’s high turnout may be largely attributed to the expansion of access to mail-in ballots and early voting, with many states changing their policies due to the COVID-19 pandemic. More than 100 million ballots were cast during the early voting period in Maryland, a large increase from prior years.

Incumbent Rep. Steny Hoyer (D-Md., 5th) was reelected for a 21st term, although he came in behind his Republican challenger in St. Mary’s, his home county.

At 69%, Hoyer won the highest percentage of votes across his district, which includes Charles, St. Mary’s and Calvert counties as well as portions of southern Prince George’s and Anne Arundel counties, allowing him to fend off his Republican challenger Chris Palombi and once again keep his seat.

In St. Mary’s, however, Palombi won more votes, about 58% total. In Calvert County, Palombi also topped Hoyer, but the incumbent easily won over Charles County voters, as well as majorities of district voters in Prince George’s and Anne Arundel.

Over the summer, the county joined the nation with protests following the Memorial Day death of George Floyd, who died after Minneapolis police officer Derek Chauvin knelt on his neck, which also took place on what would have been Breonna Taylor’s 27th birthday. Taylor, who was a Black emergency medical technician in Louisville, Ky., was killed in March when police broke down her door in an attempted drug investigation, where no drugs were found. Taylor’s boyfriend allegedly fired first, police say, believing his home was being broken into after being jarred awake during the early-morning search warrant.

During one youth-led protest against police brutality and white supremacy, the St. Mary’s sheriff’s office estimated over 1,500 people marched from the Potomac Building in Leonardtown down Hollywood Road and onto Point Lookout Road. After the Friday march, which followed a similar rally two nights prior, participants gathered back at the Potomac Building and sang a rendition of “Happy Birthday” to Taylor.

In November, artifacts were uncovered at a site in St. Mary’s County along Newtowne Neck Road, which revealed lost stories of enslaved African Americans as well as Native Americans who inhabited the land over three centuries ago. Maryland Department of Transportation State Highway Administration and St. Mary’s College of Maryland archeologists worked together to unearth a 300-year-old slave quarters site at a historic Jesuit plantation in Southern Maryland.

According to a release, many of the archaeological remains lay buried in farm fields within Newtowne Neck State Park, which is managed by the Maryland Department of Natural Resources and are located a stone’s throw from an 18th century brick manor once occupied by Jesuit missionaries. Early indications suggest the slave quarters may date to around 1700, making it “the earliest known slave quarters in the area,” Dr. Julie Schablitsky, MDOT SHA’s chief archaeologist told Southern Maryland News.

“If there was ever a place in Maryland that holds the story of diverse cultures converging to find religious freedom in an environment of conflict, sacrifice and survival, it is here,” Schablitsky said.