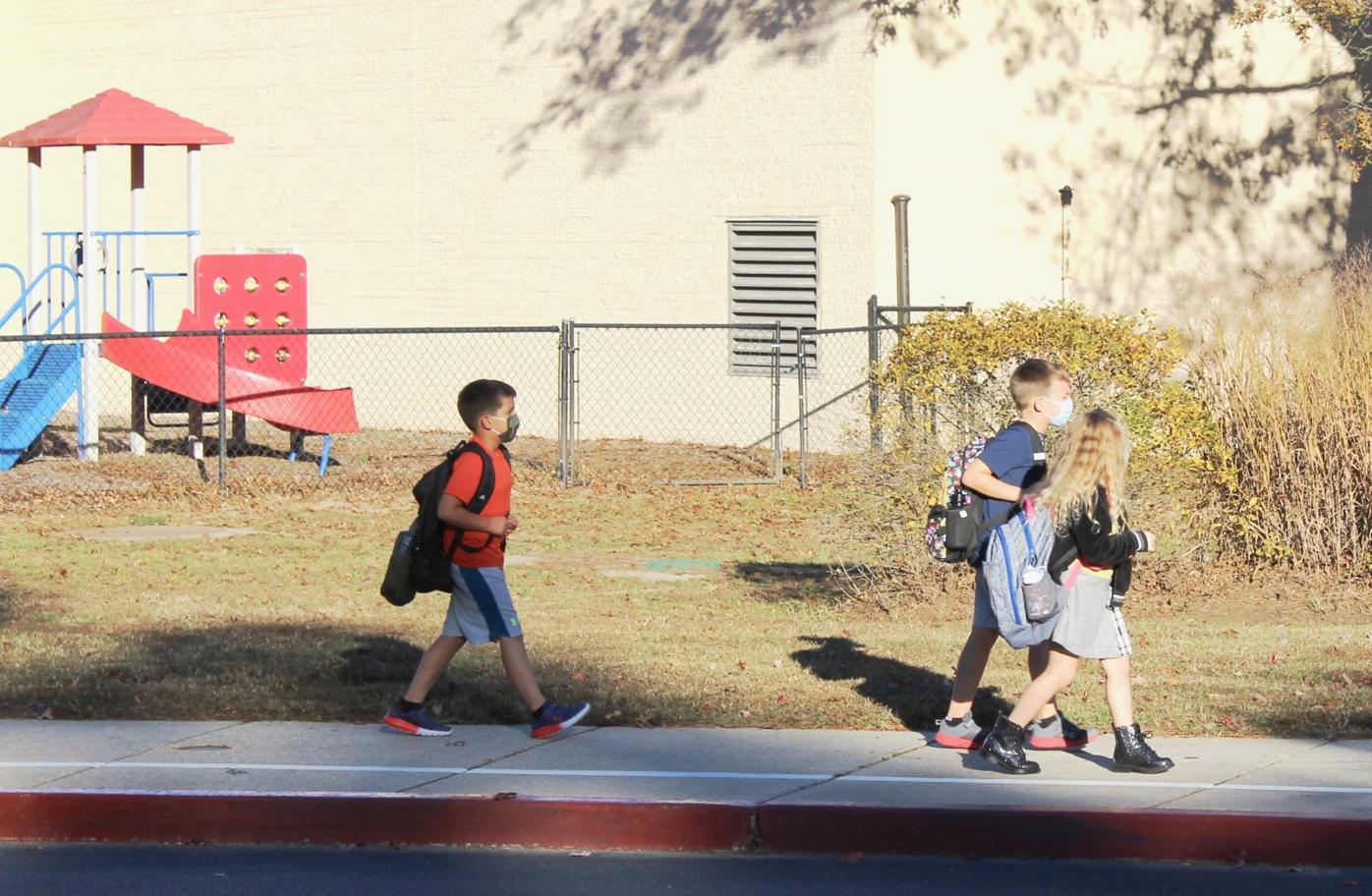 Mutual Elementary School students Troy Gines, left, Easton Pennini and Violet Bakerat walk outside after their first day back in the school building on Monday, Nov. 9. 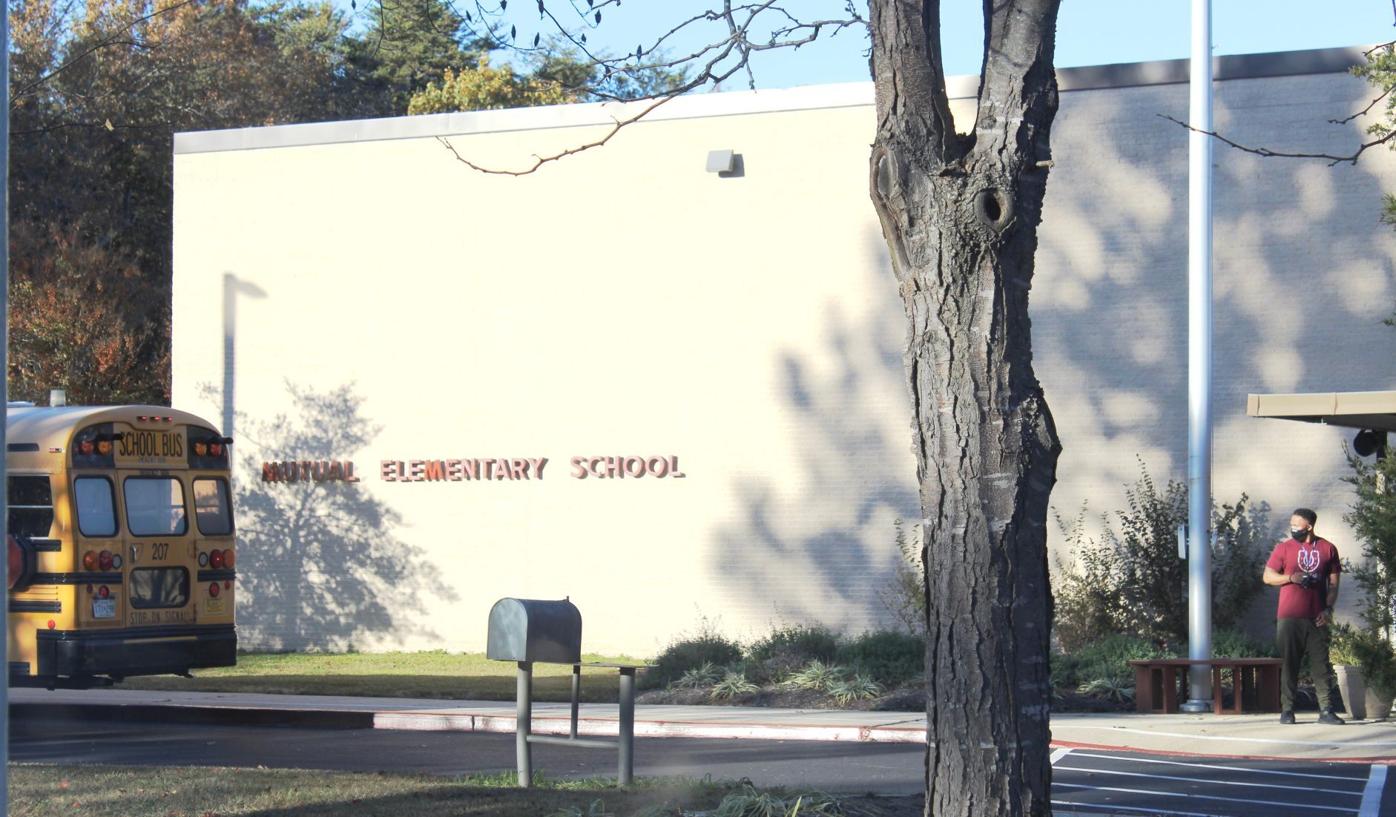 Robert White, a school district employee, stands outside Mutual Elementary School in Calvert County at the end of the school day on Monday, Nov. 9.

Mutual Elementary School students Troy Gines, left, Easton Pennini and Violet Bakerat walk outside after their first day back in the school building on Monday, Nov. 9.

Robert White, a school district employee, stands outside Mutual Elementary School in Calvert County at the end of the school day on Monday, Nov. 9.

Calvert public schools reopened for its youngest students this week with some prekindergarten through second-graders returning, while at the same time due to rises in COVID-19 cases St. Mary’s public schools canceled this week’s in-person classes and Charles public schools postponed bringing students back to schools until after the new year.

The planned return to school on Monday, Nov. 9, for some Charles County students was called off by the superintendent on Thursday, Nov. 5, due to a rise in COVID-19 cases.

On Monday, St. Mary’s public schools’ Superintendent Scott Smith noted that county had a spike in the new case rate per 100,000 people (10.31), the highest it had been since July and a dramatic increase over the past three days. Also by Monday, the county’s virus test positivity rate had increased to 6.92%.

In an emailed letter to parents on Sunday, Nov. 9, Smith said the number of weekly cases (95) from Nov. 1 to 7 was the highest the county had seen since May.

“Many of these positive cases can be traced back to social and family gatherings held over the Halloween weekend,” Smith said in the letter.

Although Calvert’s school buildings were closed to the general public on Monday — which was verified in an email from Superintendent Daniel D. Curry — Southern Maryland News interviewed Mutual Elementary second-grade teacher Brandi Torres during a phone call on her break period Monday morning.

Torres, who is in her second year at the Ball Road school, said the 12 students in her class were “very, very excited.” Torres said the students, who represent half of her class (the other half will return for four days next week), had a lot of energy. “They seem to be adjusting really well,” she said.

Now in her ninth year teaching for Calvert schools, Torres, who taught at Patuxent Elementary the first seven years, said she “looped up” with her Mutual students from last year.

Torres explained that there was an opening for a second-grade teacher at the school located west of St. Leonard, so she asked to fill it, and was able to continue teaching many of the same children who were in her first-grade class last year. This provided some continuity and familiarity with her students for the first two months of virtual learning this year, she said.

Although she lost part of her class on Nov. 9 due to one-third of her students choosing to remain in a virtual setting, Torres believes the students are still better off for having her in the transition from the end of the last school year to this school year. The virtual students were reassigned to a virtual-only teacher.

Torres said virtual learning “had its challenges.” Specifically, she said she would remind some students to keep their cameras turned on during instruction, and she would message their parents about it on a classroom app. However, the school couldn’t require the students to keep their cameras on, she said. The Dojo app is a communication tool that she decided to use with parents, but some other teachers at Mutual Elementary also use it, she said.

Last month, Calvert’s Assistant Superintendent of Instruction Diane Workman said the district is looking to bring third through fifth grades back to classrooms on Dec. 7. The board was to consider that move during its Nov. 12 meeting. Secondary schools are not set to reopen until after the new year.

For school-related COVID-19 data for Calvert and St. Mary’s schools, go to www.calvertcountycovid19.com/ccps-covid and sites.google.com/smcps.org/smcps-recovery-planning/health-and-safety/covid-data.

For Charles, go to www.ccboe.com/index.php/road-to-reopening and click on “Today’s COVID-19 numbers” on the right side of the page under “Resources.”