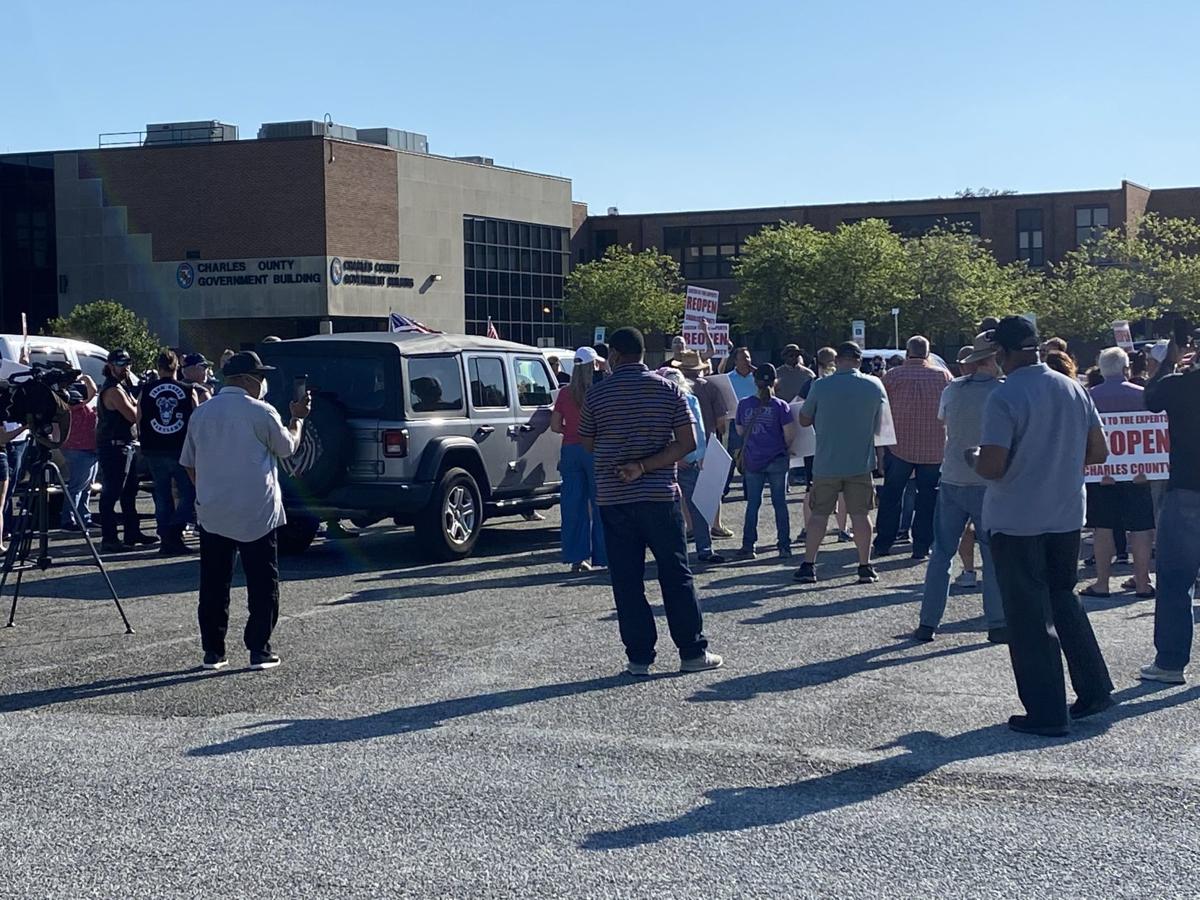 Citizens protested in front of the Charles County Government Building in La Plata on Friday to reopen the county the day after the county commissioners decided to delay the governor’s phase 1 reopening plan until May 29. 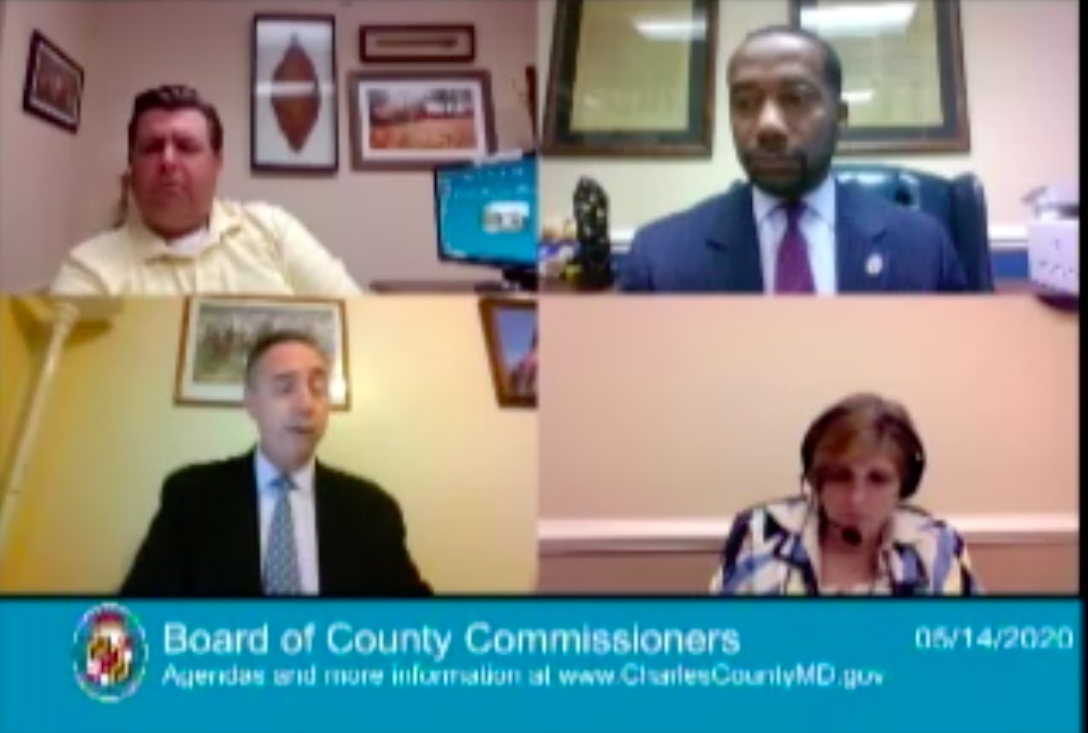 Citizens protested in front of the Charles County Government Building in La Plata on Friday to reopen the county the day after the county commissioners decided to delay the governor’s phase 1 reopening plan until May 29.

On Thursday, May 14, the Charles County Board of Commissioners met virtually to decide on May 29 as the date for phase one of Charles County’s reopening process.

After almost two hours of discussion, the May 15 reopening proposal — which is when Gov. Larry Hogan (R) lifted the stay-at-home order and commenced phase one in Maryland — was not determined to be the best date to begin phase one for the county.

The stay-at-home order, now transitioning into a safer-at-home recommendation, is permitting retail stores, places of worship and other essential personal services to open at limited capacity throughout the state of Maryland.

However, the Charles County commissioners voted to not move on to phase one of the process just yet. The board voted 3-2 to begin phase one on May 29. As of now, the stay-at-home order in Charles County is still in place. This means social distancing, limiting group gatherings to 10 or less and wearing face masks in enclosed areas will be required for at least a little while longer.

That decision triggered a rally at the county government building on Friday that attracted about 100 people, according to attendees. The rally was reportedly mostly civil and ended without incident. The Charles County Sheriff’s Office monitored the rally and reported no incidents.

“The outcome of the vote resulted in strong reactions on social media, some that raised concern among our community,” sheriff’s office spokesperson Diane Richardson wrote in a press release sent out on Saturday. “Further, a protest of the vote took place earlier this evening at the County Government Building in which the Sheriff’s Office monitored. The protest concluded without incident.”

Dr. Howard Haft, executive director for the Maryland Primary Care program, said at the meeting — based on the standards that the governor set — he believes the county is ready to reopen.

“Based on the standards that the governor set, we are prepared to comply with phase one,” Haft said. “It will really depend highly on the behavior of the community.”

He added that the county is “in that zone” to where phase one could commence. “We are in a place where the numbers would support it.”

Charles County Attorney Wesley Adams detailed the legal framework of the governor’s order the community must know heading into reopening.

“Charles County is permitted to open outdoor public spaces,” Adams said. “The governor’s executive order asks that the board of commissioners consults with Dr. Haft before making the decision to reopen.”

Although the governor gave the green light on the process, Adams detailed the restrictions still in place throughout the state.

“We still cannot gather in groupings larger than 10 persons,” Adams said. “Retail establishments may reopen. ... They cannot exceed more than 50% of their capacity. There are personal services that are allowed, but people are required to wear face masks. It is by appointment only and they are under the 50% occupancy restriction as well.”

He added that, under the governor’s order, places of worship are encouraged to host gatherings outside and they are limited to the 50% occupancy as well.

“Businesses that are still required to close are senior centers, restaurants and bars,” Adams said. “Fitness centers are still not permitted to open under the governor’s executive order.”

He added that any stores in malls that open directly into the parking lot — under phase one of the process — are permitted to open.

Stores that are in the interior of the mall are not permitted to open unless they are essential services such as pharmacies, grocery stores or health care services.

Commissioners’ President Reuben B. Collins II (D) told the Maryland Independent that his main priority is to ensure the general health and safety of the residents of Charles County before he feels ready to give the go-ahead on reopening. Collins and Commissioners Amanda M. Stewart (D) and Thomasina O. Coates (D) voted to delay, while Commissioners Bobby Rucci (D) and Gilbert “BJ” O. Bowling III (D) voted to reopen under phase one.

He said his final decision to hold off the reopening until May 29 was based on the “uncertainty that existed” throughout the county. “I felt more comfortable delaying as opposed to making a decision with limited knowledge of what the potential consequences could be,” Collins said. “I opted on the side of caution.”

He told the Maryland Independent that although he did not feel ready to reopen at this time, as a small business owner, he is optimistically looking ahead to phase two of the three-part process.

“I am a small business owner myself, this is hurting me personally. We are all suffering right now,” Collins said.

He noted the dynamic that exists between the safety and well-being of the community and the local economy is the balancing act the county is facing. “Health, safety and welfare is really what drove me. Balancing that with our absolute need to bring our economy back. We will come back as a stronger Charles County.”

“It is our responsibility to ensure that our local economy is given an opportunity to thrive,” Collins said. “Those two dynamics conflicted. There was clearly a division within the community on this.”

He explained that there is confusion in Charles County right now because other parts of Maryland are beginning their reopening process. “I don’t know if there is any way you can get around it,” Collins said. “I was supportive of the governor establishing guidelines that were consistent throughout the state. The spread is still rising.”

He told the Maryland Independent that right now is a critical time to put out information to the county so they are informed and ready to transition into phase one.

“One thing we are going to do is use this period to put out information, to make sure they are prepared for [May] 29,” Collins said. “It will be an education period to assure residents there is a path moving forward.”