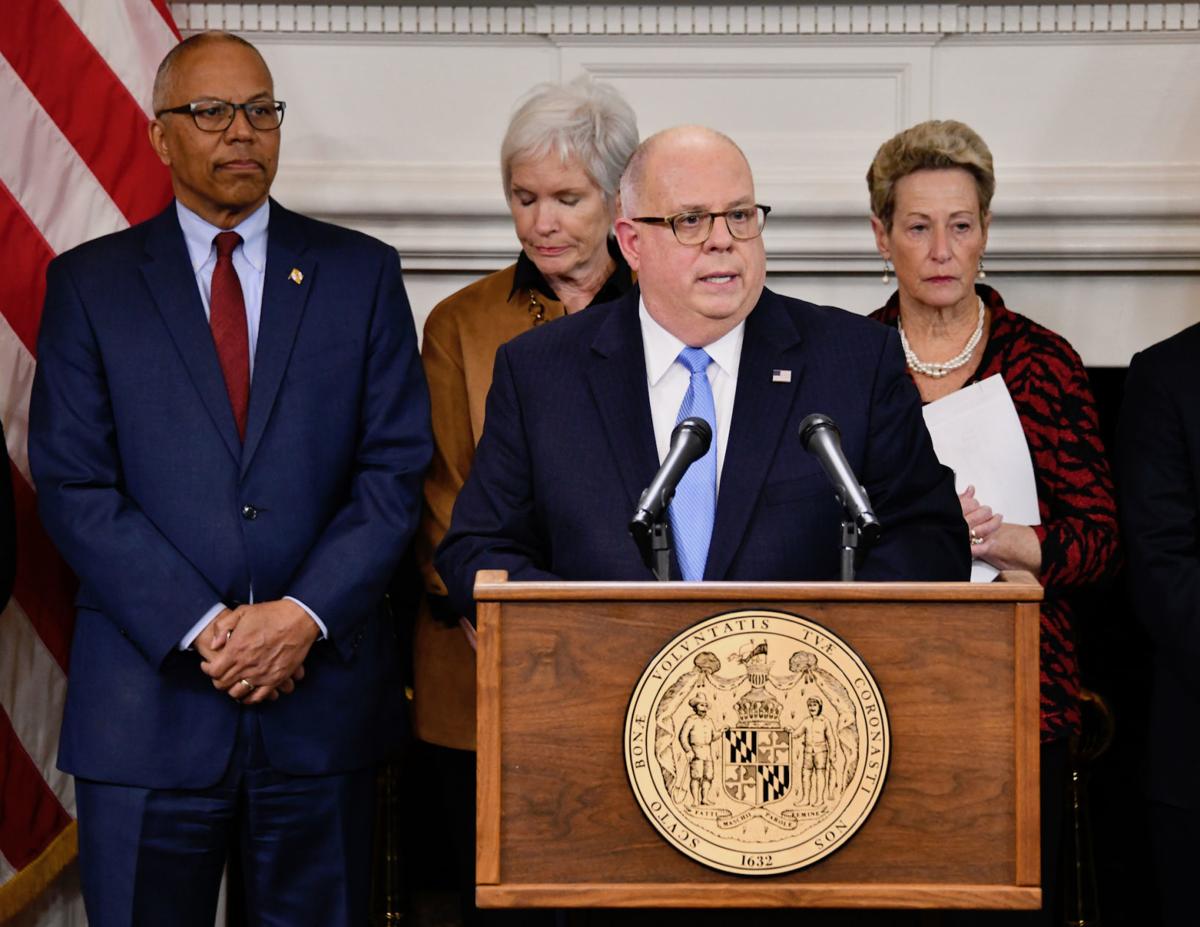 Gov. Larry Hogan (R) is seen here in a photo courtesy of the governor’s office holding a news conference to address the growing outbreak of the novel coronavirus in Maryland. Joining him are Lt. Gov. Boyd Rutherford (R), left, Deputy Secretary of Public Health Fran Phillips and State Superintendent of Schools Karen Salmon. 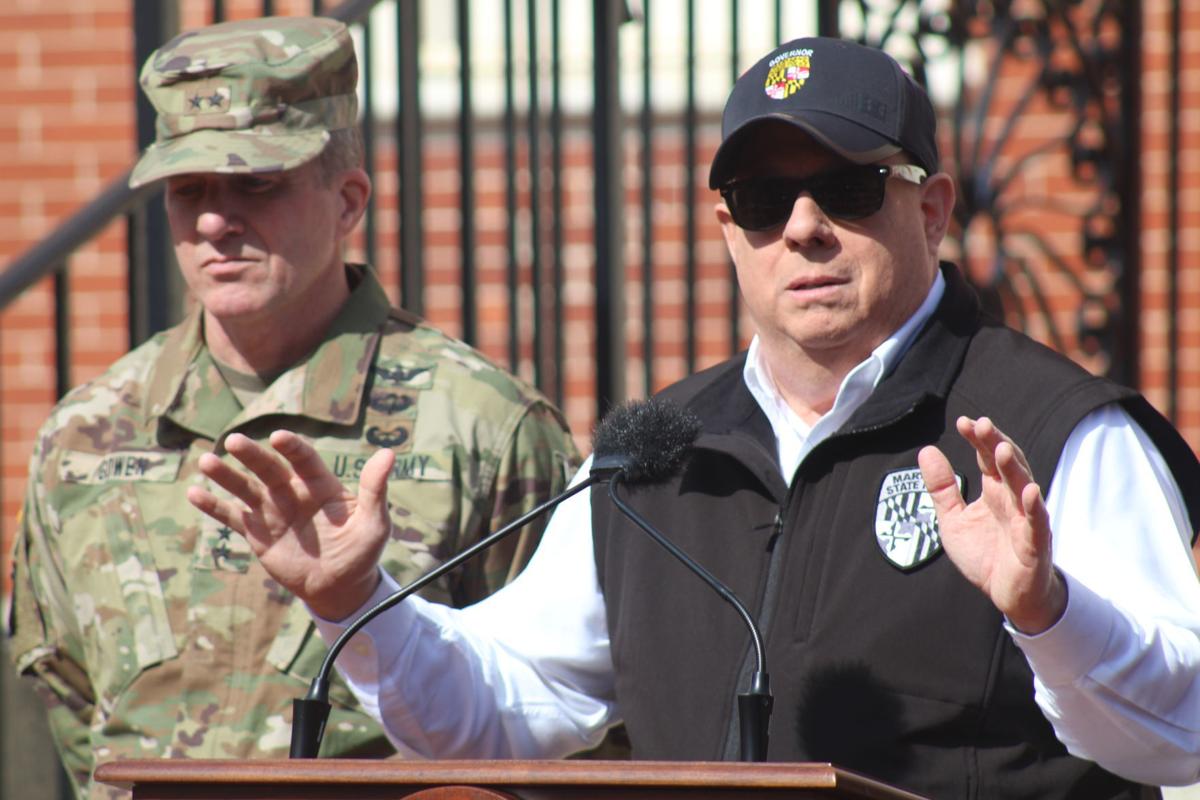 Gov. Larry Hogan (R) is seen here in a photo courtesy of the governor’s office holding a news conference to address the growing outbreak of the novel coronavirus in Maryland. Joining him are Lt. Gov. Boyd Rutherford (R), left, Deputy Secretary of Public Health Fran Phillips and State Superintendent of Schools Karen Salmon.

First schools were closed, then restaurants and gyms and theaters and in his latest move to combat COVID-19, Gov. Larry Hogan is postponing Maryland’s presidential primary.

As the novel coronavirus known as COVID-19 continues to spread through Maryland, Hogan (R) has been holding frequent news conferences to announce additional measures to slow the outbreak.

Hogan held a news conference that afternoon, announcing additional steps the state is taking to combat the spread of the disease, including canceling school for the next two weeks. Joined by Lt. Gov. Boyd Rutherford (R), State Superintendent of Schools Karen Salmon and others, Hogan spoke about how the state has been preparing to combat the spread of what is referred to as COVID-19 and plans to ramp up actions.

As the number of confirmed novel coronavirus cases in Maryland neared 40 with no predictable end to the spread in sight, Hogan ordered dine-in restaurants, bars, movie theaters and gyms to close indefinitely, starting at 5 p.m. Monday, March 16.

Hogan announced the move during a news conference that morning, saying it’s necessary because “far too many people” have continued to cram into bars and restaurants despite prior warnings to avoid crowded places.Maryland’s primary election, originally scheduled for April 28, has been postponed until June 2, Hogan announced during another news conference on Tuesday, March 17.

“It would put Marylanders at risk, especially poll workers and election judges, most of whom are retirees and a part of the most vulnerable population,” he said. “Therefore, I am issuing a proclamation to postpone the April 28 primary until June 2.”

At the March 12 news conference last week, Hogan spoke about the circumstances around that first case to be contracted without travel or contact with another known infected person and how it showed the spread of the virus had entered a new phase in the state. He said the expectations should be for the number of cases to “dramatically and rapidly rise.”

The state’s response is shifting from containment to mitigating and limiting the spread of COVID-19, Hogan said, adding that the World Health Organization is calling the outbreak to be a “global pandemic.”

“I want to again assure Marylanders that all levels of government have been preparing for this for many weeks. But we have moved into community transmission in our state and we believe that all of us need to take serious actions to limit day-to-day interactions and activities,” he said.

Salmon announced that all public schools are to be closed from March 16 to 27 and all school-sanctioned travel to be canceled effective immediately. She said schools and buses are to be cleaned and disinfected during the closure.

To make up for the lost instructional time, Salmon recommended school systems hold classes during scheduled spring break days.“It is crucial that we take immediate measures to slow the spread of COVID-19 in school communities around the state,” Salmon said.

Senior centers also were ordered closed until further notice, Hogan announced.Hogan also issued an order prohibiting “any social, community, religious, recreational or sports gatherings or events of more than 250 people in close proximity at all locations and venues across the state.” That number has since been refined to less than 50 people.

He announced changes to hospital visitor policies, which are in line with those already made by University of Maryland Medical System and UM Prince George’s Hospital Center, among them that visitors under the age 18 will not be permitted and permitted visitors must go through a health screening.

Fran Phillips, deputy secretary for public health, said measures are being taken with three goals in mind: slow the spread of infection; protect those who would be more vulnerable if they contract the virus, namely older residents and those with underlying health conditions; and maintain essential services.

Hogan said the Maryland Emergency Management Agency is at its highest alert level. He issued an executive order activating the National Guard, with troops prepared to hit the streets — “in order to carry out any necessary functions in critical areas of need” — within 12 hours of being called out.

Hogan said he is delegating day-to-day operations of his administration to Rutherford, allowing Hogan to focus his efforts on the state’s COVID-19 response.

At the March 16 news conference, Hogan said drive-through, carry-out and delivery food services will still be permitted to remain operational, as well as grocery stores, pharmacies, gas stations, banks and “other essential services.”

Additionally, following the Centers for Disease Control and Prevention’s lead, Hogan banned all community, social, religious, recreational and sports gatherings or events of more than 50 people in close proximity across Maryland — a significant decrease from a prior 250-person limit Hogan had announced March 12.

While Hogan didn’t provide specifics March 16 regarding the penalties for failing to abide by the new restrictions, he said local and state law enforcement agencies, and if necessary the National Guard, will be “strictly” enforcing them.

These restrictions “carry the full force of the law,” Hogan said.

To accommodate Marylanders as they adapt to these changes, Hogan said utility companies will be prohibited from charging late fees or shutting off services, including cable, gas, electric, phone, internet, water and sewer. Eviction of any tenant also is prohibited during the state of emergency, he said.

“Decision-makers at the federal, state and local level are going to have to take drastic actions right now that may seem scary and may sound extreme,” Hogan said. “They will be terribly disruptive, but they are also absolutely necessary to save the lives of hundreds of thousands of Americans.”

Regarding the primary, Hogan said at the March 17 news conference that he is directing the Maryland Board of Elections to develop a comprehensive plan by April 3 to conduct the primary election in a way that protects public health and preserves the integrity of the democratic process.

This proclamation has one exception, however. The state is still moving forward with the April 28 special election to fill Maryland’s Seventh Congressional District seat in Congress. The seat was vacated late last year after the death of Elijah Cummings, a Democrat who represented Maryland’s 7th District in the House of Representatives.Also at the March 17 news conference, Hogan said the state has been in discussions to move the Preakness Stakes to some time in September. The Preakness Stakes horse race is the second leg of the Triple Crown, a coveted and rare achievement in horse racing.

All vehicle emissions inspections program sites will cease operations. The Maryland Health Department and the Maryland Department of Transportation have been directed to immediately prepare to have these sites repurposed to be used as drive-thru COVID-19 testing centers across the state.

Hogan urged all Maryland citizens to avoid unnecessary travel. The state is taking immediate steps at Baltimore-Washington International Airport to enact increased social distancing. Anyone who is not a traveling passenger or an airport employee is discouraged from entering the airport terminal, he said.

Hogan emphasized that it is important for every Maryland citizen to do their part to help the state government “flatten the curve.” People who feel sick should stay home from work and contact their medical provider, he said. Parents or legal guardians are encouraged to do the same for children who feel sick. If a person in the household tests positive for COVID-19, the entire household should self-quarantine and contact their medical provider, he said.

“At the same time, everyone should use common sense,” Hogan said. “Panic-buying just increases person-to-person exposure. Instead of hoarding cleaning and hygiene products, share with your neighbors.”“We’re all in this together, and it will take everyone of us working together to keep people healthy and to save lives,” the governor said Tuesday.