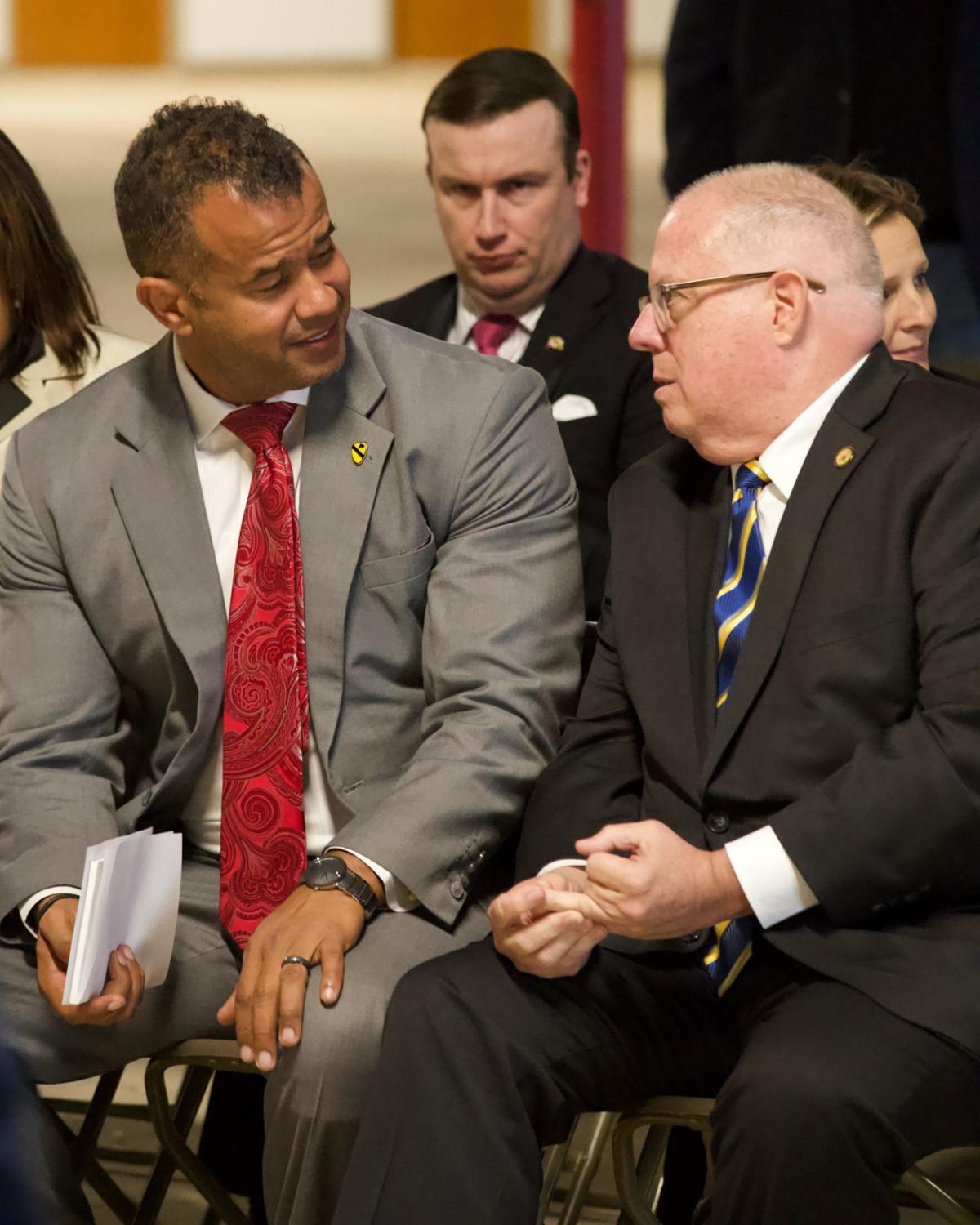 Del. C.T. Wilson (D-Charles), left, converses with Gov. Larry Hogan (R) in November prior to a ceremony at which the Rural Maryland Council unveiled a $350,000 gift to the College of Southern Maryland to help complete the new Velocity Center in Indian Head that is scheduled to open later this year on the site of the old Ely’s Warehouse on Route 210. 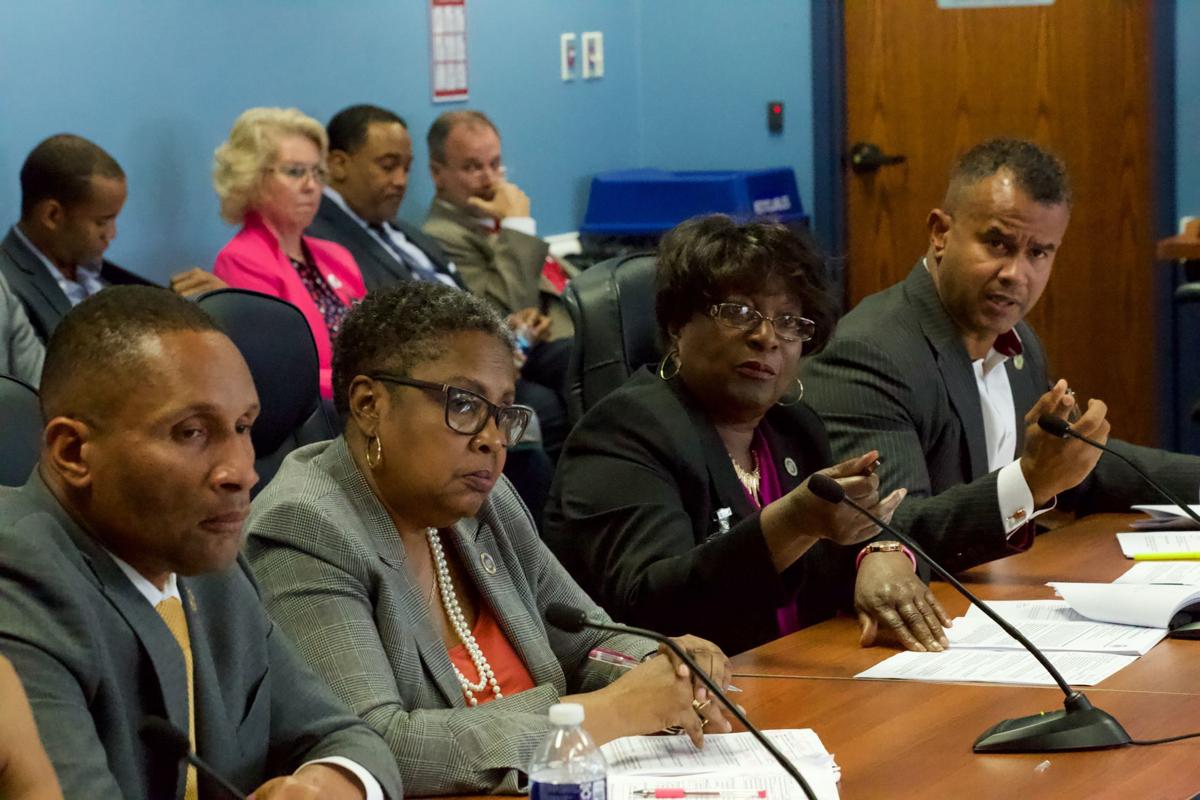 Sen. Arthur Ellis, left, and Dels. Debra Davis, Edith Patterson and C.T. Wilson, all Charles County Democrats, discuss legislative proposals for the 2020 General Assembly session during a public hearing with the Charles County Board of Commissioners in late September.

Del. C.T. Wilson (D-Charles), left, converses with Gov. Larry Hogan (R) in November prior to a ceremony at which the Rural Maryland Council unveiled a $350,000 gift to the College of Southern Maryland to help complete the new Velocity Center in Indian Head that is scheduled to open later this year on the site of the old Ely’s Warehouse on Route 210.

Sen. Arthur Ellis, left, and Dels. Debra Davis, Edith Patterson and C.T. Wilson, all Charles County Democrats, discuss legislative proposals for the 2020 General Assembly session during a public hearing with the Charles County Board of Commissioners in late September.

With the rise of positive cases of COVID-19 spreading throughout the country, Maryland legislators decided to take measures to help prevent the spread of the virus. On Sunday legislators announced the Maryland General Assembly wold adjourn Sine Die today, Wednesday, with a plan to reconvene for a special session in the last week of May.

Last week, General Assembly receptions and public testimonies for bill hearings were canceled starting Friday, to aid in slowing the spread of the coronavirus.

When a reporter from The Enquirer-Gazette reached out to Sen. Jack Bailey (R-St. Mary’s) for a comment on the issue, a representative from his office forwarded an email from Senate President Bill Ferguson (D-Baltimore city) that was sent to members of the Senate and the public regarding updated polices regarding building access during the General Assembly.

The March 13 email reads, “Effective immediately, only members, press, and essential employees of the Maryland General Assembly, Department of Legislative Services, and State government are authorized within the legislative complex and State House. The only exception is for individuals with existing appointments. Those individuals will have to be escorted to and from the building’s entrance by the members or staff person with whom the individuals are meeting.”

While health organizations are constantly changing guidelines and the situation continues to evolve, plans changed and the decision was made to adjourn nearly three weeks early, instead of the scheduled Sine Die on Monday, April 6.

“I have 23 bills, and it looks like they’re all going to die,” Wilson said.

Still, Wilson said, he understood the concern for legislators’ health that led to the decision to end the session early.

“The chamber is small, and there are quite a few delegates who are over 70, and I don’t think it’s worth putting anyone’s health at risk,” Wilson said.

Melissa Bender, chief of staff for Del. Debra Davis (D-Charles), said Davis is excited to have her first bill, HB 979, which would require reporting of commissary costs in prisons and jails, pass the House floor. Other bills are also progressing.

Del. Brian Crosby (D-St. Mary’s) said the only constitutional requirement of the General Assembly is to pass a balanced budget, and to finish on Wednesday is the “fastest [legislators] can do it.” Lawmakers wanted to adjourn earlier but also needed a “realistic timeline” for completing the $50 billion budget.

“Leaders want to do our part in setting an example” with actions to prevent the spread of the virus “for others to follow,” Crosby said, adding, “we are going to finish the budget and get out of there.”

According to the delegate and other sources, this is the first time since the Civil War that the session has been interrupted and ended early.

Del. Matt Morgan (R-St. Mary’s) told the The Enquirer-Gazette on Monday that the delegates still have “a lot of stuff to finish up.” The General Assembly was entering into a period called “crossover” where bills are going between the House and the Senate. The schedule has been “rapidly accelerated,” he said.

It’s been “very hard” to balance the budget “because of Kirwan and tax increase bills,” Morgan said. He also mentioned the “huge” financial impact the coronavirus will have on the county and the state through revenue losses.

Morgan said he made a list of top priority bills to get through for this week, which included a bond authority bill and an economic development bill. He said most of the “transparency bills” put forth by St. Mary’s commissioners regarding the Open Meetings Act had already passed.

Del. Gerald W. “Jerry” Clark (R-St. Mary’s, Calvert) said in an interview the “real problem started about the same time as the crossover” period, but the budget is now their “first priority.”

According to Clark, the first look at the budget was planned for Monday and was expected to be voted on and passed sometime on Tuesday, or at the latest Wednesday.

“There are some good bills that probably won’t get done” but they are also “not short-changing any bills that would effect the health and well-being” of the state, Clark claimed.

House committee meetings were still live-streamed through the state website, Clark assured, in case anyone wanted to tune in to see what’s happening.

“It’s better to err on the side of caution,” he said.