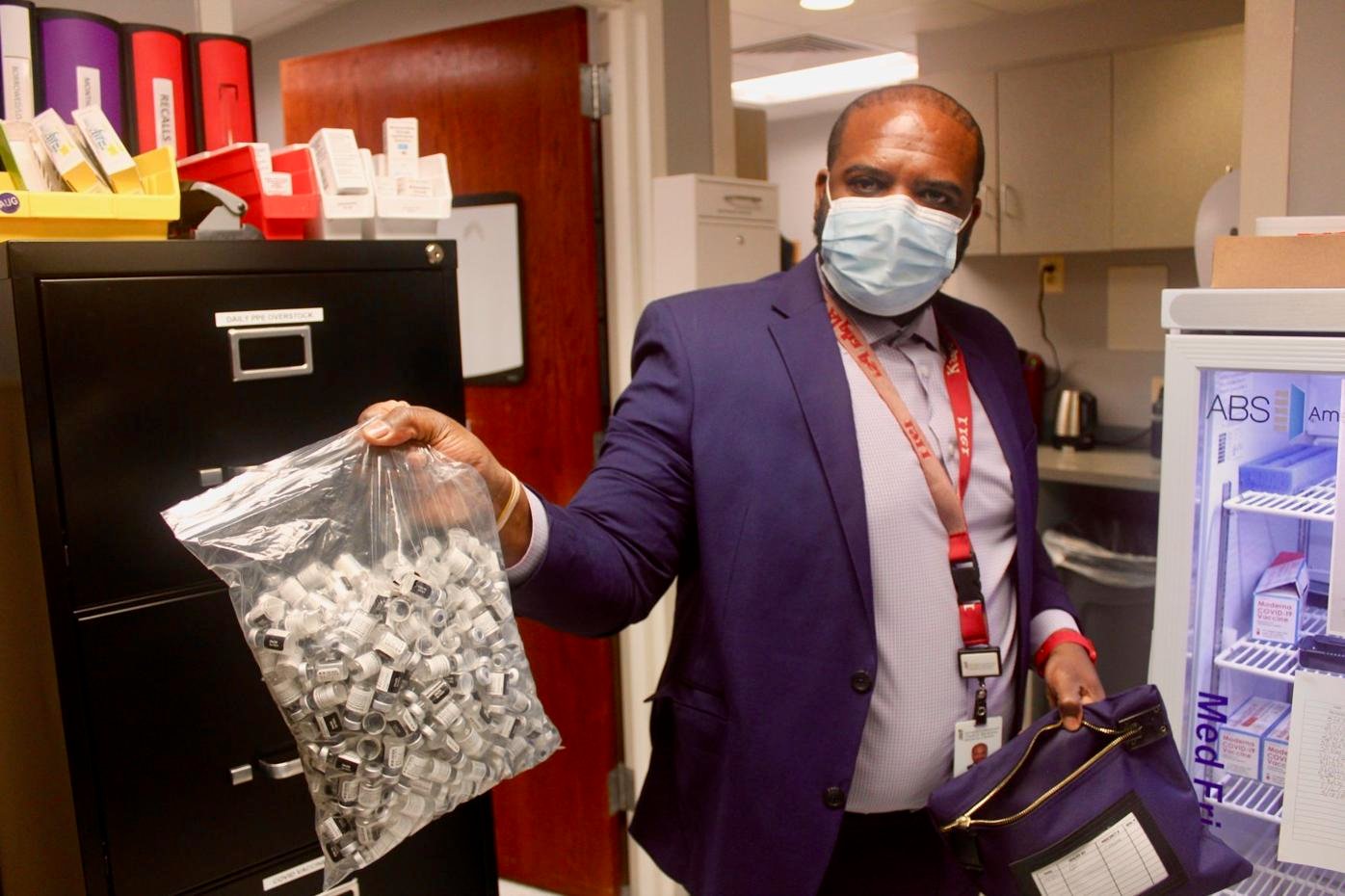 Uchema Obua, the director of pharmacy at University of Maryland Charles Regional Hospital, shows off a bag of the first vials of the Pfizer COVID-19 vaccine that were distributed at the hospital in December and January. 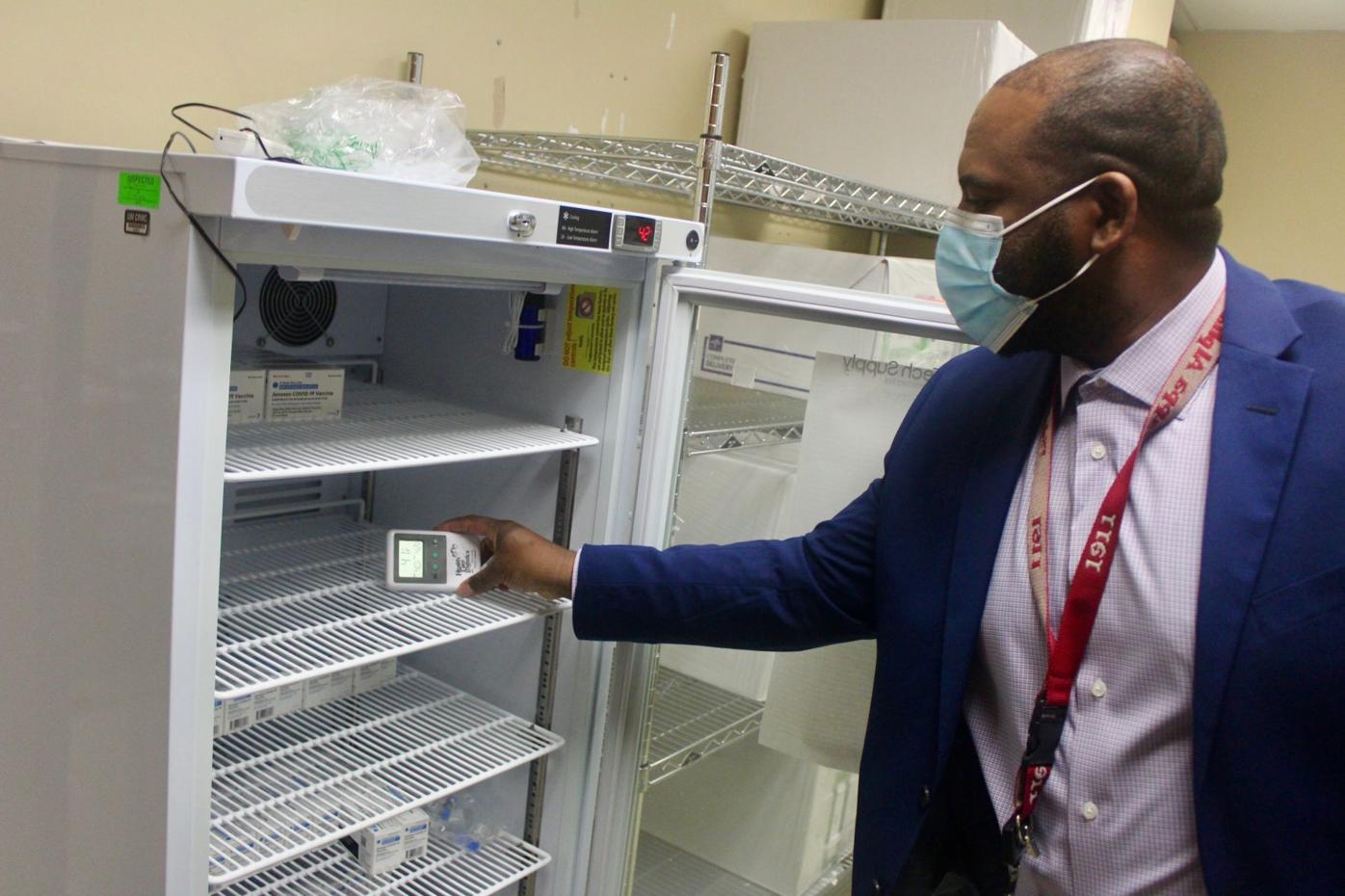 Uchema Obua, the director of pharmacy at University of Maryland Charles Regional Hospital in La Plata, checks the temperature in a refrigerator holding a supply of Jonhson & Johnson COVID-19 vaccines, which do not have to be kept at super-cold temperatures that the Pfizer and Moderna vaccines would have to be kept in.

Uchema Obua, the director of pharmacy at University of Maryland Charles Regional Hospital, shows off a bag of the first vials of the Pfizer COVID-19 vaccine that were distributed at the hospital in December and January.

Uchema Obua, the director of pharmacy at University of Maryland Charles Regional Hospital in La Plata, checks the temperature in a refrigerator holding a supply of Jonhson & Johnson COVID-19 vaccines, which do not have to be kept at super-cold temperatures that the Pfizer and Moderna vaccines would have to be kept in.

Southern Maryland businesses are adjusting to the governor’s relaxed mask mandate, which took effect Saturday after a federal agency’s surprise announcement last week that people could shed their masks.

On Friday, Gov. Larry Hogan (R) announced he would be relaxing the state’s mask mandate — with the exception of public transportation, schools, child care and health care settings — a reversal of an order he made prior to the Center for Disease Control and Prevention announcement that would ease mask restrictions once the state reached 70% of its eligible population being vaccinated for COVID-19.

It would be a “logistical nightmare” to lift the mandate only for vaccinated people, Hogan said.

“There’s no way to put that into some kind of order, how we’re going to find out who is and who isn’t” vaccinated, the governor said. The state is still strongly recommending that unvaccinated people over age two wear face coverings in indoor spaces, and outdoor spaces where physical distancing can’t be maintained.

Businesses, however, are still allowed to have their own mask policies, Hogan said.

“There will just be no legal mandate from the state,” he said.

St. Mary’s Health Officer Dr. Meena Brewster, who was vaccinated in December, told St. Mary’s commissioners on Tuesday that wearing a mask was still a personal decision, herself wearing one to the open meeting. She said she took into consideration her family, including two children who are unvaccinated because they are under 12, and that she would be in the meeting mingling with a variety of members of the public in a poorly-ventilated space.

“When I was making my decision, I considered those circumstances,” Brewster said.

After the CDC announcement, a wave of chain retailers also relaxed their own mask rules this week, including Target, Walmart, Giant, CVS and Starbucks; however, some businesses have not stated whether they are adjusting their rules in line with the new announcements.

Theories and mistrust regarding the COVID-19 vaccine could prolong the pandemic, if not enough people receive the vaccine, according to health officials.

“Honestly, it’s miseducation, is the real reason,” Uchema Obua, the director of pharmacy at University of Maryland Charles Regional Medical Center, said in his office on Wednesday morning.

Obua, who assists in vaccine distribution for the hospital, said a lot of hesitance spiked when the Johnson & Johnson one-dose vaccine was paused by the FDA following concerns over extremely rare blood clots. The vaccine was resumed shortly after, due to how rare the clots were, but the mistrust continued, and not just towards that particular vaccine.

Obua said some may “misunderstand the process” of approval, which went at lightning speed throughout the pandemic, and believe certain health measures were skipped.

Those measures were not skipped, but were rather overlapped, in some cases, for speed.

“It’s under the same scrutiny, the only difference is the time frame,” he said.

Messaging is important, and Obua said the right information might not be resonating with people.

Monique Daniel, a pharmacist at the hospital, said one-on-one messaging works better than blanket statements about getting the vaccine.

“You have to explain the process,” she said. That includes explaining how mRNA vaccines, such as the Pfizer or Moderna shots, work. Daniel said the word itself may have caused doubt in people’s heads.

“RNA, I think it was a trigger for people,” who may have been led to believe the vaccine would alter their DNA, which is not the case, she said.

Hesitancy to get vaccinated, especially as the state and nation move toward a post-COVID-19 world with eased restrictions, could potentially drive cases back up, the two medical professionals said.

With mask mandates now lifted in most circumstances for all, vaccinated or unvaccinated, COVID-19 numbers could go back up if those who hesitate to get vaccinated avoid doing so.

“I think it will lead to more folklore” if case rates go back up, Obua said.

“Every week it could change,” she said.

No matter the doubt, the world is attempting to reach herd immunity by boosting vaccine percentages and eventually kill off the virus. The more people who are immunized, the less occurrence of the virus appears, Daniel said, as demonstrated by diseases such as smallpox, which vanished worldwide by 1980.

The approximate amount of the population that would have to be vaccinated to reach herd immunity would be 80%, but that is uncertain, Obua said.

Charles Regional, for example, is running mobile clinics, specifically to African American and Hispanic populations that are “especially, the most hesitant,” Obua said.

The three county health departments, as well, are pushing vaccines to populations that may be getting less vaccinated, whether due to hesitancy or access issues.