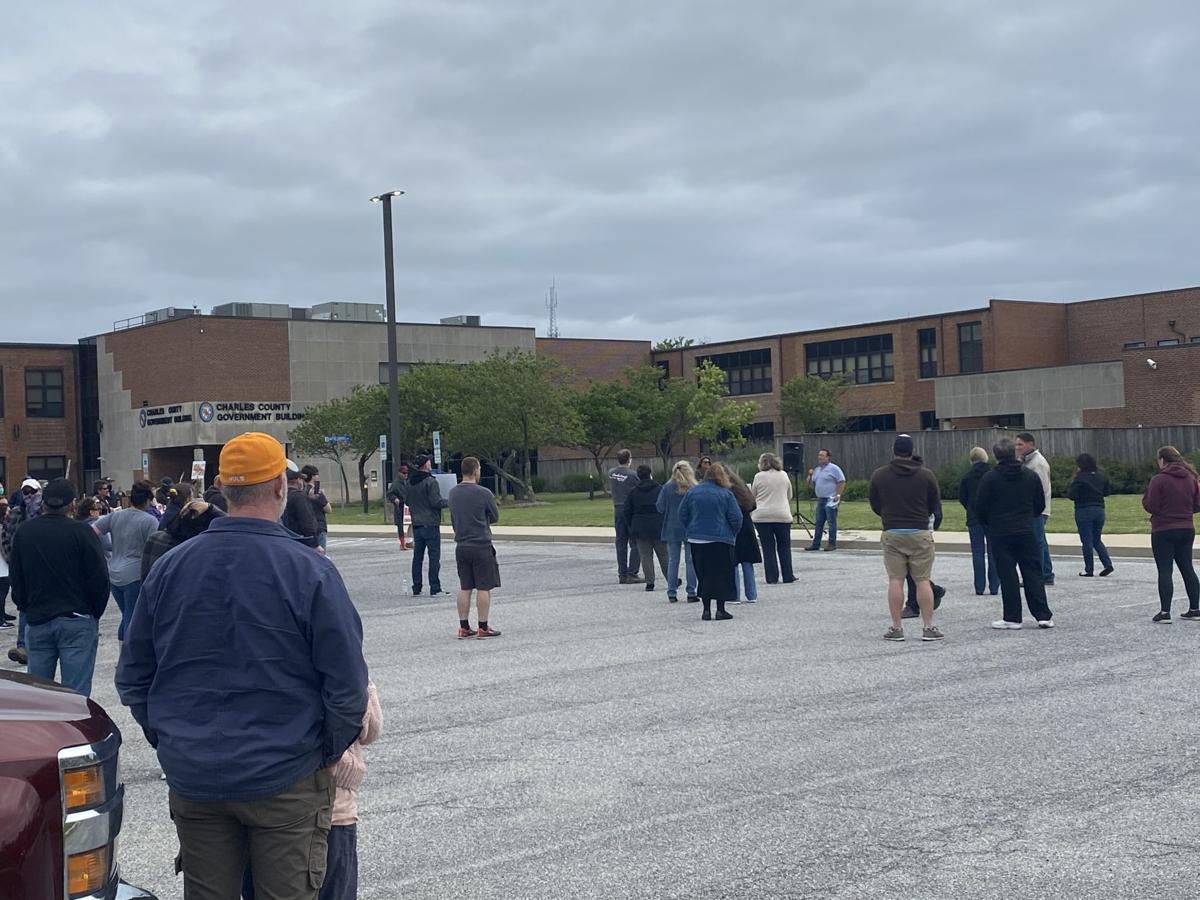 “The data, science, the advice of the experts, is that we are ready; Dr. Haft told the commissioners that we must let the people out,” Alexandra Rak, organizer of Reopen Charles County, said at Wednesday’s protest at the county government building in La Plata. “The virus isn’t going anywhere, we can’t keep people in their homes forever.” 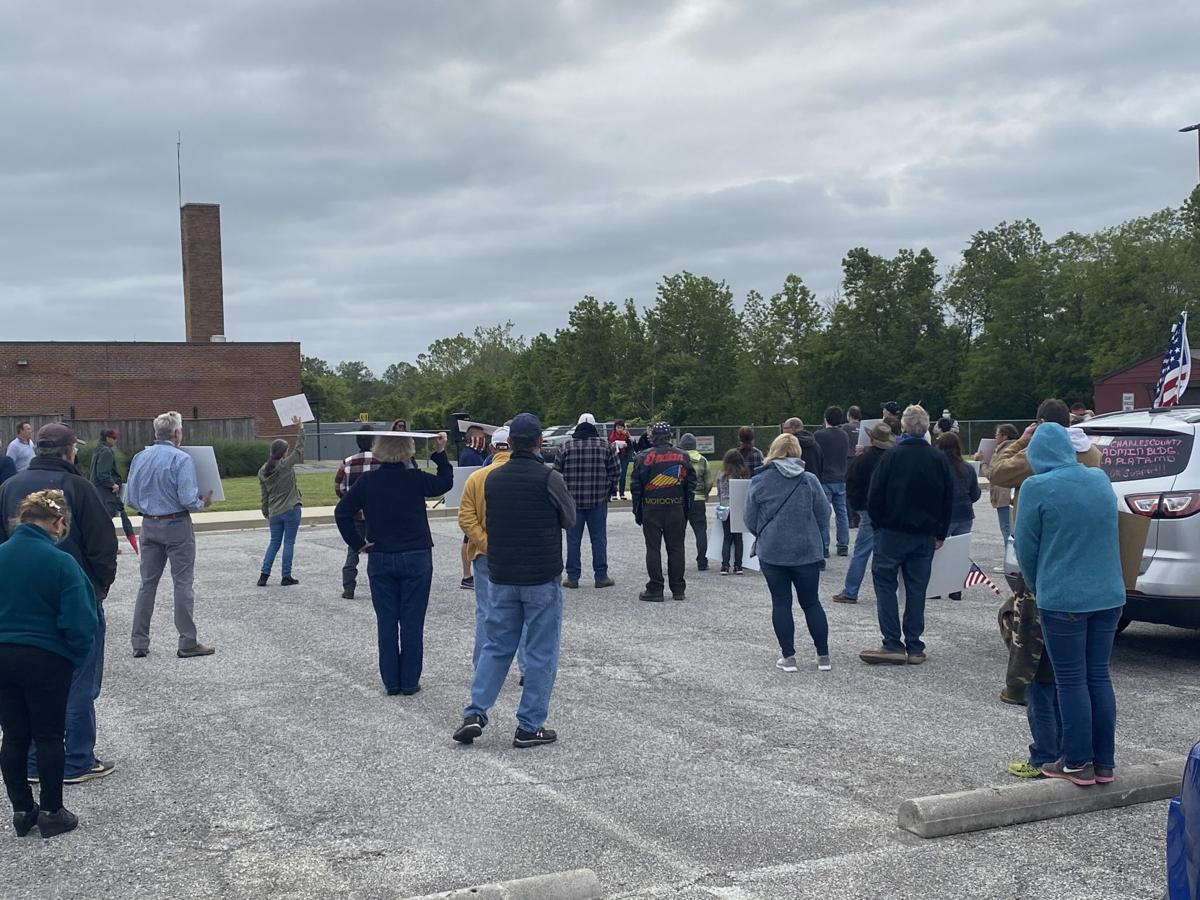 Citizens gather in front of the county government building Wednesday in La Plata to protest the commissioner’s ruling to push back the county’s reopening under the state’s Road to Recovery plan to May 29.

“The data, science, the advice of the experts, is that we are ready; Dr. Haft told the commissioners that we must let the people out,” Alexandra Rak, organizer of Reopen Charles County, said at Wednesday’s protest at the county government building in La Plata. “The virus isn’t going anywhere, we can’t keep people in their homes forever.”

Citizens gather in front of the county government building Wednesday in La Plata to protest the commissioner’s ruling to push back the county’s reopening under the state’s Road to Recovery plan to May 29.

Ali Rak, president of Charles County Right to Life and an organizer of Reopen Charles, told the Maryland Independent that “experts” told the commissioners it is safe to reopen Maryland and move to phase one of the three phased approach as of May 14.

“By all data, science and everything, we are ready to open, but they are worried about people’s fear,” Rak said. “[The commissioners] want to educate people on opening safely.”

She noted that, after two months of being closed, there are some visible negative impacts in the community, and most noticeable is the small business sector.

“After two months of being closed down, we are seeing some very negative impacts,” Rak said. “Businesses are the most visible: no revenue. They can’t pay their employees or pay their bills.”

She explained that a lot of people are waiting on unemployment checks or loans from the government, and the process of reopening must accelerate. “They are really suffering. They want to know why [chain stores] have stayed open, but someone with a small shop can’t also be allowed to open up at the same time. We also are seeing permanent closure of businesses. Even if we opened up tomorrow, there is a great deal that won’t make it.”

Rak told the Maryland Independent that it is not just business owners who are being effected by the crisis; children — who regularly would not be home at this time — are experiencing some negative repercussions.

“Kids are being negatively impacted by a stay-at-home order,” Rak said. “A lot of kids have recreational sports; they aren’t getting any of that. They aren’t getting the socialization with their friend. What we are hearing from families is behavior outbursts, sadness and depression from their kids.”

She added that — if Charles County continues to delay phase one of reopening — the subsequent phases will be delayed as well. “If we don’t open soon, that continues to push out our own county’s deadline to enter phase two or phase three.”

“I think there is a lot of worry that if we continue to follow other counties in the state that have worse cases than we do, we are going to continue to lag behind in opening up,” she said.

Rak told the Maryland Independent that most of the protesters simply want their voices to be heard by the commissioners. “We want to feel like our elected officials take the things that we have to say into consideration when they are making decisions — not just the fear.”

Rak said the motto of the protesters, “facts, not fear,” is exactly what the group wants in the long run. “We want decisions of the county made based on facts, not fear,” she said. “We really want this driven by the reality of the situation and not just being scared. It is okay to safely leave their homes at this point now that we have passed the peak.”

Bill Dotson, organizer of the protests and president of Modern Door in White Plains, said it is best to follow the expert opinions on reopening.

“After the governor said let’s move to phase one, they had an emergency meeting and brought in experts,” Dotson said. “All five said we are ready to reopen, yet three commissioners said we aren’t. It’s funny how a virus can become political.”

Dotson, a member of the Charles County Republican Central Committee, ran for the county’s state senate seat but lost to Democrat Arthur Ellis in 2018.

He added that — in his opinion — Charles County is ready to look past phase one and proceed to phase two of the process. “We are lagging behind,” he said. “When the governor is ready to move to phase two, the same counties [that delayed the process] are going to delay.”

“If we don’t put pressure on the county they won’t go to phase two,” Dotson said. “That is why reopen Charles County is no longer about phase one. It is about making sure Charles County follows the governor and does not continue to be two or three weeks behind the governor’s order. His orders are already overly-cautious.”

The next rally, Dotson said, is going to take place on May 29 before the 5 p.m. opening. “We are probably going to have a rally on the 29th ... more like a celebration rally.”

He said that a lot of businesses in the county are looking forward to Memorial Day, a big revenue generator for many businesses. “For a lot of people, Memorial Day is a big part of their businesses,” he said. “There were a lot of people there [at the rally on Wednesday] that said they are running out of money.”

He noted that the decision to leave one’s house should be about personal choice. “We are here to support small business and we are about choice. Many customers are going to come out and support. Many people compromised are going to stay home.”

He said that is the ultimate choice America offers to people. “We offer freedom of choice. If you are safe and feel healthy, come out and shop. If you feel like you are not safe, stay home.”

Dotson continued by telling the Maryland Independent that no arrests were made at the two peaceful protests and the anti-protesters went to the wrong location due to a last-minute relocation of the gathering.

“Our rally is peaceful, it is respectful and it is not political. We don’t call out any party,” Dotson said. “We donate to the community and support the charities. We need our representative to help small businesses.”

Unrelated to the Reopen Charles County organization, the Charles County Chamber of Commerce, which represents around 500 of the 2,600 businesses in the county, has organized Charles County Strong to add business owner voices to the push to reopen under the governor’s “Road to Recovery” plan.

“We need all of our businesses to come together as one very loud voice amplified in unison to declare ‘I’m ready!’” said Thomas Blandford, the chamber’s board chair, in promotional literature sent to businesses. “Equally as important, the business community must demonstrate that it is ready to open and operate their businesses in a safe and responsible manner.”