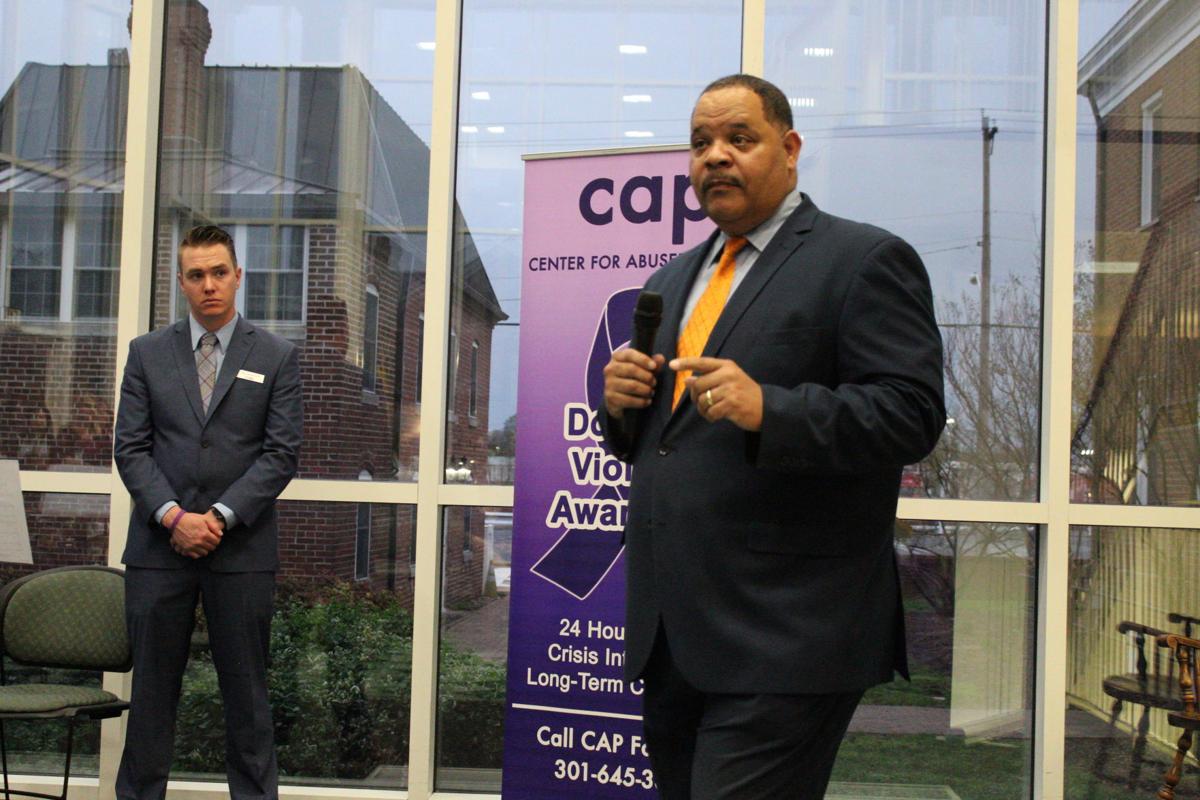 Above right, Charles County State’s Attorney Tony Covington (D) speaks to the crowd gathered in April 2019 at a candlelight vigil in La Plata as Center for Abused Persons board member Neal Bankenstein observes. 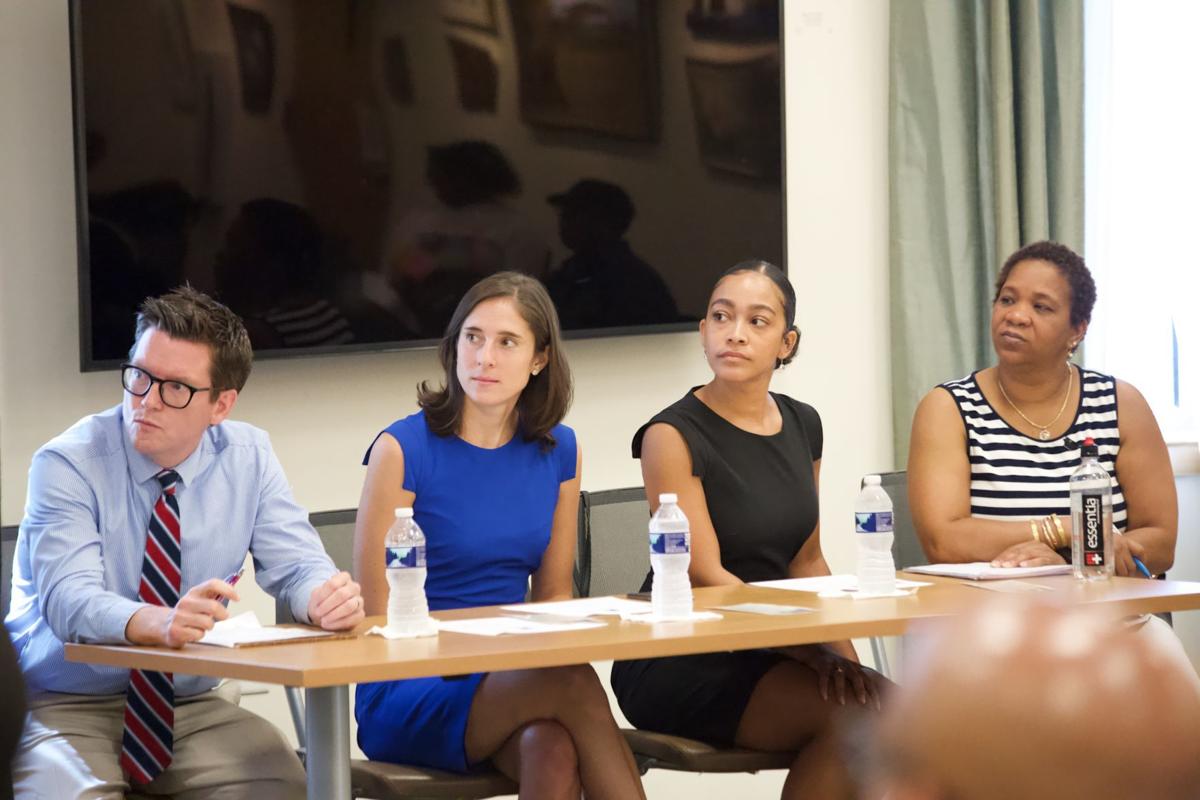 Public defender Michael Beach, left, and attorneys Michele Harewood, Brittni Downs, and Abbey Thibeault of the Maryland Office of the Public Defender listen to a question during a community conversation on criminal justice at the Waldorf West Library last year.

Above right, Charles County State’s Attorney Tony Covington (D) speaks to the crowd gathered in April 2019 at a candlelight vigil in La Plata as Center for Abused Persons board member Neal Bankenstein observes.

Public defender Michael Beach, left, and attorneys Michele Harewood, Brittni Downs, and Abbey Thibeault of the Maryland Office of the Public Defender listen to a question during a community conversation on criminal justice at the Waldorf West Library last year.

A news release from Charles County State’s Attorney Anthony Covington states that — in an effort to curb the spread of COVID-19 in detention centers — some inmates in Charles County will be released prior to the expiration of their sentence.

Proceeding Gov. Larry Hogan’s (R) executive order released on April 18, which stated that some inmates in the Division of Corrections may be released from confinement based on a number of factors, Covington (D) followed suit.

More serious crimes involving domestic abuse, sex offenses and crimes of a violent nature are excluded from the list of potential inmates to be released.

Although the order applies to inmates in the DOC, Hogan’s order does not apply to local detention centers, such as the Charles County Detention Center. Therefore, Covington took it upon himself to invoke the core of the order for the inmates in Charles County.

In the news release from Covington released on April 20, he specified the intent of his decision: to do everything possible to “help prevent the spread and impact of COVID-19.”

Covington told the Maryland Independent that there are two competing interests, both involving public safety: the health crisis and the criminal aspect.

“This is very difficult,” Covington said. “We have never really had to face health issues in the justice system. An individual inmate may have health issues and ask for leniency. You have the confluence of two strong competing interests.”

The release states that the Charles County community should feel confident of the selection of inmates that are set to be released.

“All of the decision-makers in the Charles County Criminal Justice System are making fully informed and well-considered decisions that they sincerely believe are in the best interest of everyone in our community,” Covington wrote.

He said that this is a unique situation because normally, inmates’ individual health issues do not affect other inmates in the prison population; but due to the nature of COVID-19, the entire prison population could be impacted.

“[Health issues] usually don’t damage anyone else in the jail,” Covington said. “With corona, if this guy stays in the jail, this guy may contract it and give it to someone else. [The decision making] is difficult for prosecutors and judges.”

Covington said that the final decision on which detainees get released is ultimately made by the judges and the courts. At the time of the press release, “at least one” inmate has been released from the detention center.

“It is done on a case-by-case basis,” Covington said. “We review everything ... we look at the factors. It is ultimately the judge’s decision. ... I am trying to protect the public safety. ... If someone is charged with murder, I am not going to agree for them to come home.”

He said that there is one “complicated factor” in the decision making process. That factor is referred to as an “agreed upon sentence.”

“Everyone agrees ... in that situation, that state, the state defendant and the judge agree,” Covington said. “The state has to agree to the change that is going to be made. Ordinarily it is the judge who makes the decision after hearing form both parties. That is the only time the state has any control.”

Covington added that although the population of the detention center is only 20% to 30% full, Charles County is doing the best it can to make sure everyone inside is protected.

“Charles County is not like the stuff we are hearing about on television; our jail is less than 30% capacity, probably about 20%,” Covington said. “The environment of everyone sitting on top of each other just doesn’t exist here.”

He followed by saying the final decision is “two-pronged,” boiled down to two main factors. Factor number one is if the inmate is a threat to the community or themselves, and factor two is if they are going to show up in court.

He followed by making reference to an inmate who was recently released and went on to commit another crime briefly after his release.

“We had a guy who was arrested for domestic violence, released, and two or three days later he killed his intimate partner,” Covington said. “He killed her, and then killed himself.”

He told the Maryland Independent that part of letting the inmate out of incarceration was based on the virus, and that, unfortunately, a negative impact can happen when you take that chance on someone.

“Every time a judge makes a decision, they are taking a chance,” Covington said. “The impact on the community can be very bad. We are serious in handling every single case.”

He went on to tell the Maryland Independent that courts are handling two or three cases a day, and that the inmates who commit non-violent crimes are more likely to be released.

Covington said that although the inmates may be released now, some may have to return to the detention center to finish their sentence at a later date. The ultimate determination of which inmates will be released permanently is based on the nature of their offenses and the length of their remaining sentence.

“Some people will get furloughed and have to come back, some will be released and have to go to drug treatment. We have even dismissed some cases,” Covington said. “It runs the gamut.”

He told the Maryland Independent that this is an “unprecedented circumstance” and that Charles County has never faced a situation like this before.

“I have never seen it,” Covington said. “The last time our nation has faced anything like this is 1919. I have never seen prosecutors look at every single case to determine if they should be released from jail; it just hasn’t happened before.”

He added that individual inmates ask for releases frequently, but it has never occurred as a mass wave of requests at a single time.

“People ask for early releases all the time for individual reasons,” Covington said. “Some for health reasons, but only individual health reasons. This is a brand new thing and it is tricky for sure.”

Covington told the Maryland Independent that the citizens of Charles County can be assured that the decisions are being handled very diligently and everyone involved is doing “what they should.”

“I think Charles County citizens can be rest assured everyone in the system is doing a very diligent job and sincerely looking at the situation and making the best decisions they can to protect the communities at large and protect the detention centers,” Covington said. “All you can do is sincerely look at things and have the right motives. They wont always agree.”

District Public Defender Michael Beach wrote in an email to the Maryland Independent stating that both public safety and the safety of the inmates “are important and not mutually exclusive.”

“Community safety is not inconsistent with having the vast majority of people who are pending trial and presumed innocent,” Beach wrote. “A Detention Center is one of the most dangerous places a person can be during a pandemic.”

“Over-incarceration — which disproportionately impacts poor people and people of color — tears apart families, and tears apart communities, doing lasting damage,” Beach wrote. “An unprecedented moment like this is perhaps the worst time to err on the side of incarceration and punishment for punishment’s sake.”

He told the Maryland Independent that, in most cases, the inmates file a request to be released to their attorneys, although a few do handle the process on their own. He continued by stating there are a number of inmates who have been released since the pandemic’s inception.

“There are various categories of folks who have been released since the pandemic shut down the judicial system to emergency and bail hearings only,” Beach wrote.

Additionally, he noted that “incarcerated persons for whom our office filed motions seeking their release since the pandemic became a crisis that shut down most of [Charles] County” are being released in abundance. He wrote that 60 motions for release have been filed with approximately 30 detainees being released as of Tuesday, and currently, there have been two inmate deaths contributed directly to COVID-19 throughout Maryland.