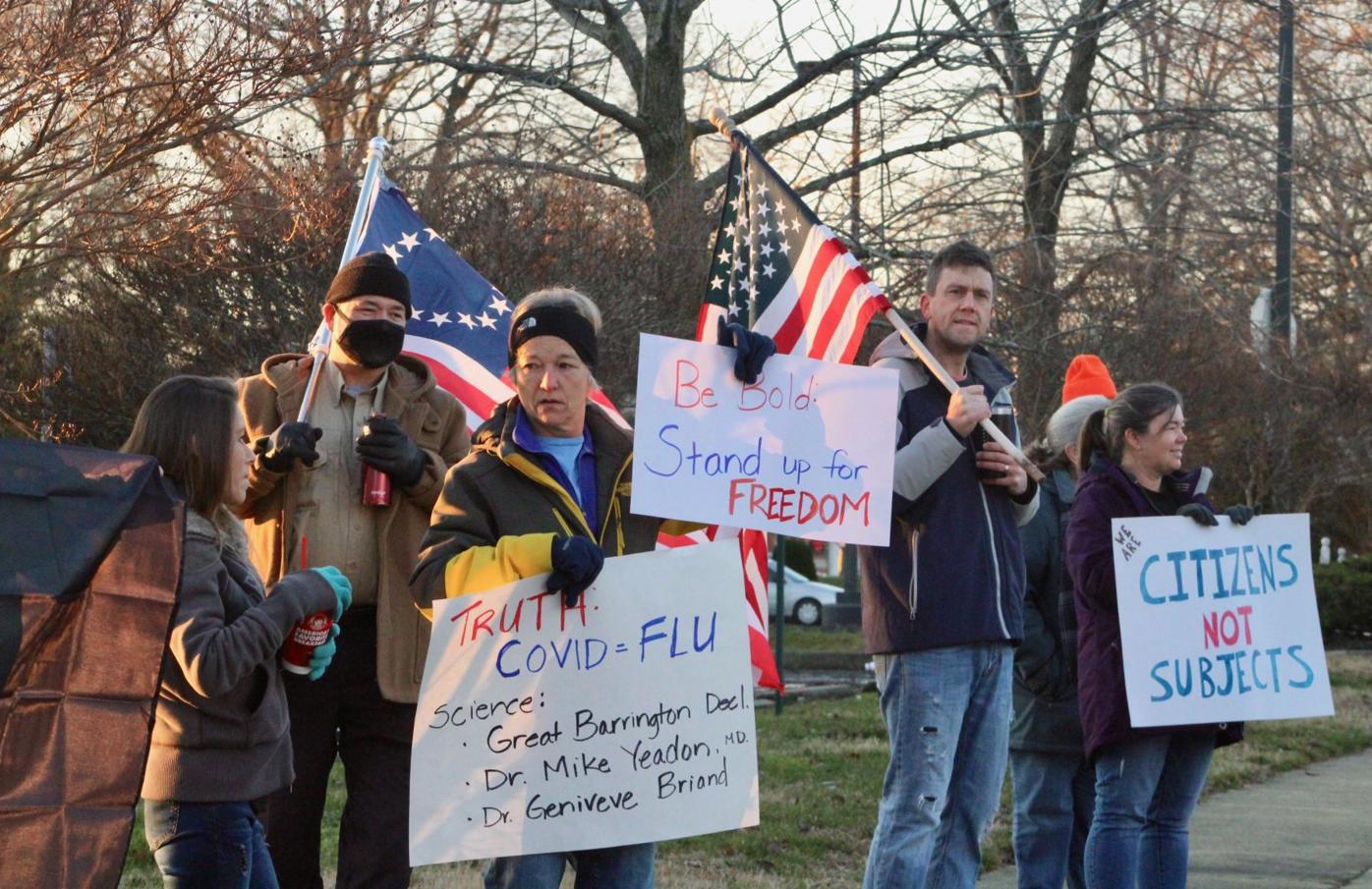 A group of supporters of Ridge Hardware owner Donnie Tennyson and ReOpen St. Mary’s stand outside the St. Mary’s County Health Department in Leonardtown on Tuesday morning to protest the agency. 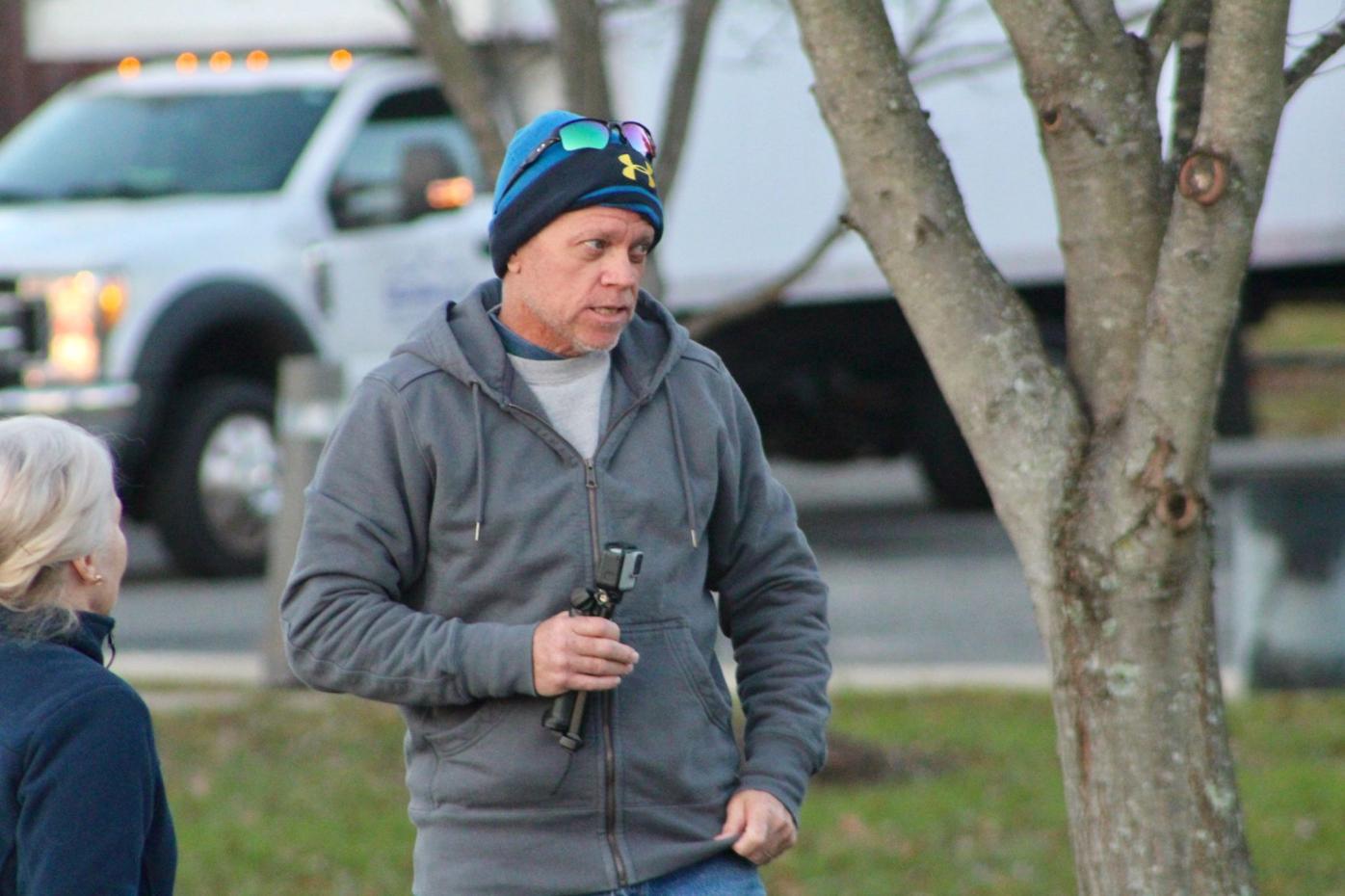 Ridge Hardware owner Donnie Tennyson, armed with his GoPro camera, chats with fellow protesters outside of the St. Mary’s Health Department in Leonardtown on Tuesday morning.

A group of supporters of Ridge Hardware owner Donnie Tennyson and ReOpen St. Mary’s stand outside the St. Mary’s County Health Department in Leonardtown on Tuesday morning to protest the agency.

Ridge Hardware owner Donnie Tennyson, armed with his GoPro camera, chats with fellow protesters outside of the St. Mary’s Health Department in Leonardtown on Tuesday morning.

The owner of Ridge Hardware said he planned on reopening the shop this week in violation of the St. Mary’s County Health Department’s order to close on Saturday morning for COVID-19 violations, which he says are unfounded.

At his shuttered hardware store on Sunday, owner Donnie Tennyson said health officials shut his store down following numerous inspections, where health department employees took notice of two employees not wearing masks, along with other alleged violations such as signage requirements and floor markings.

The unmasked employees had told Tennyson they had health issues preventing them from wearing masks, he said, and he did not ask them what that issue was due to privacy concerns. He said in an interview that he did not feel comfortable telling Southern Maryland News whether either of those employees were his direct family members.

Later, he admitted that he himself was caught not wearing a mask, and said he had health issues which prevented him from wearing them. He would not say what those health issues were, either.

“We have been clear with the facility that a medical reason for not wearing a face covering does not mean that the employee or customer can then put the health of others at risk,” Dr. Meena Brewster, the county’s health officer, said in a statement on Sunday, adding the employer can provide accommodations, such as having the employee work in a separate environment.

Tennyson said instead of doing that, he offered accommodations to customers who might be “uncomfortable” with him and his mask-less employees, offering curbside pickup. He said he was “confused” as state and local guidance on mask exemptions is not clear-cut.

The health department said it received 17 complaints about the facility in the past five months, including five in December. Tennyson said he suspects those are the same one or two people, but complaints are anonymous.

After putting up a small sign saying that masks were required in August on the store’s door, which still also says “Enter at your own risk,” Tennyson said health department employees told him to put up a larger sign.

He claimed he was a “target” of the health department after he fought them on the issue.

The health department said in a statement inspections of the store indicated the store would post the mask signage, then remove the signage after inspections, an accusation which Tennyson challenged.

Tennyson and many others gathered outside the hardware store on Sunday to protest the health department’s order, which requires the store to close until the end of the COVID-19 pandemic state of emergency, or until the store submits a plan to fix its violations.

“I think I’m being treated unfairly from the big box stores,” he said, referencing a lack of social distancing enforcement and “employees wearing masks below their noses” at such stores.

The store owner said earlier this week he “has to decide” when he will be opening the store back up, and will have a GoPro video camera with him “in case I am arrested.” Called back on Tuesday evening, Tennyson said he planned to open the store on Thursday, Dec. 17, however the store appeared closed that morning.

On Tuesday morning, Tennyson and a group of supporters gathered outside the health department’s headquarters off Peabody Street in Leonardtown to protest pandemic restrictions as well as the closure of the hardware store.

The health department “was able to continue operations as normal” during the protest.

St. Mary’s added 316 new cases last week, breaking a new record for weekly COVID-19 cases. Since then, the seven-day average of cases has slightly dropped. The ZIP code where Ridge Hardware is located has under eight cases.

In the past two weeks, 13 St. Mary’s County residents have died of the virus, increasing numbers which do not yet match the springtime peak of deaths in May.

A total of 74 St. Mary’s residents have died of the virus, and nearly 3,000 have tested positive since March.