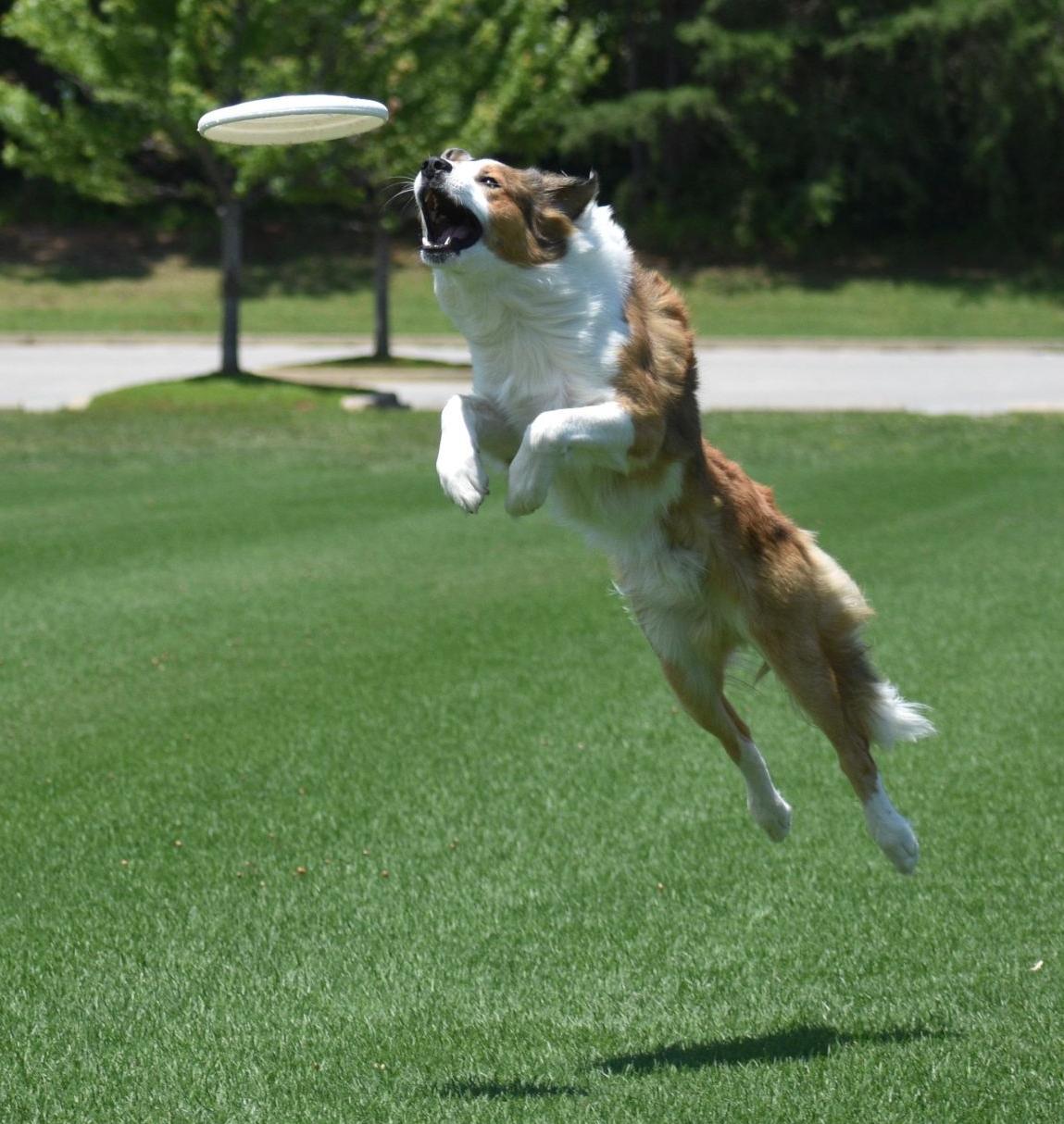 Beasley, who is the 2018 National Stunt Dog Champion, recently starred in “Agent Toby Barks,” a Lionsgate movie that was released earlier this year.

Toby (played by Beasley) searches for information on the computer in a scene from “Agent Toby Barks.” 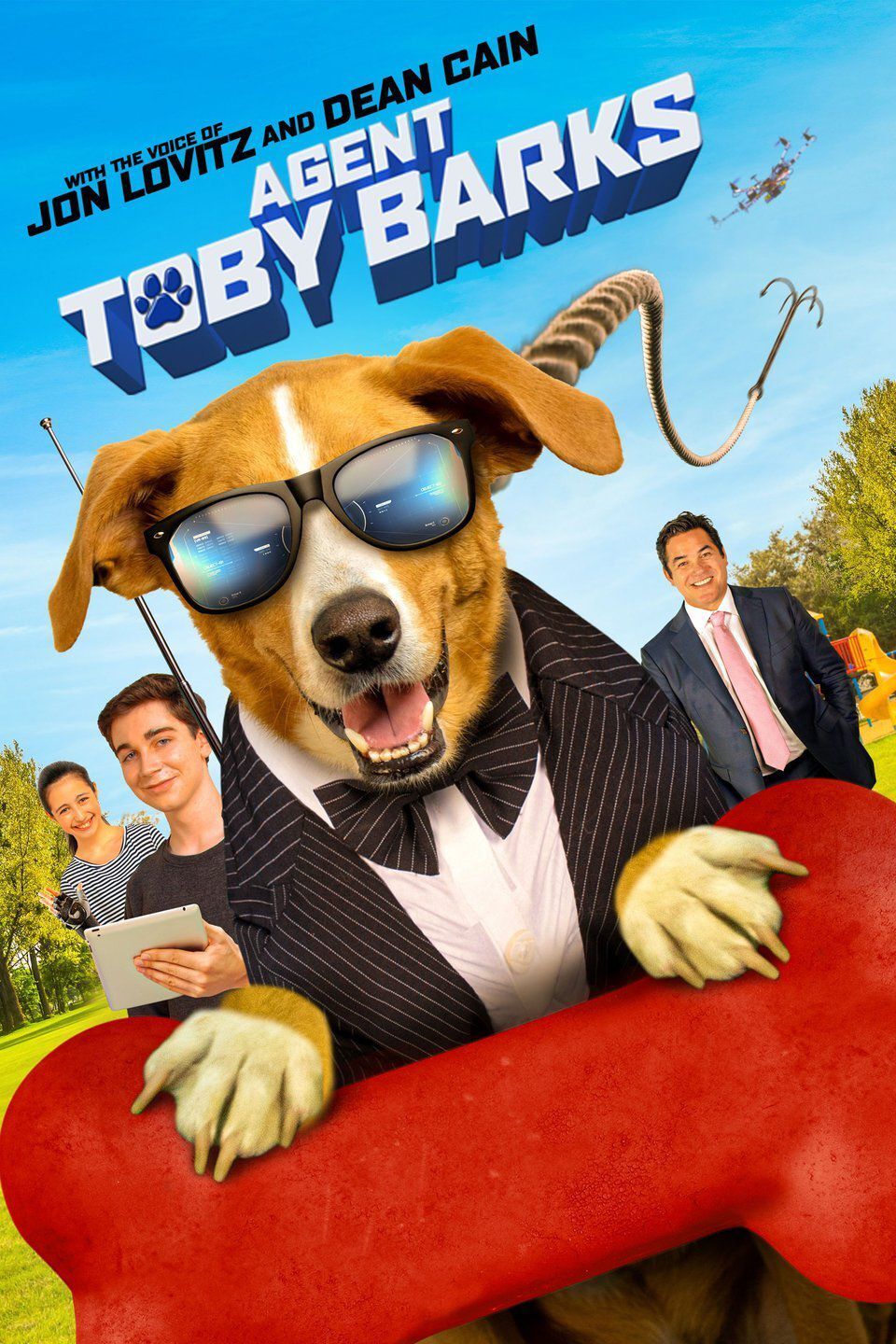 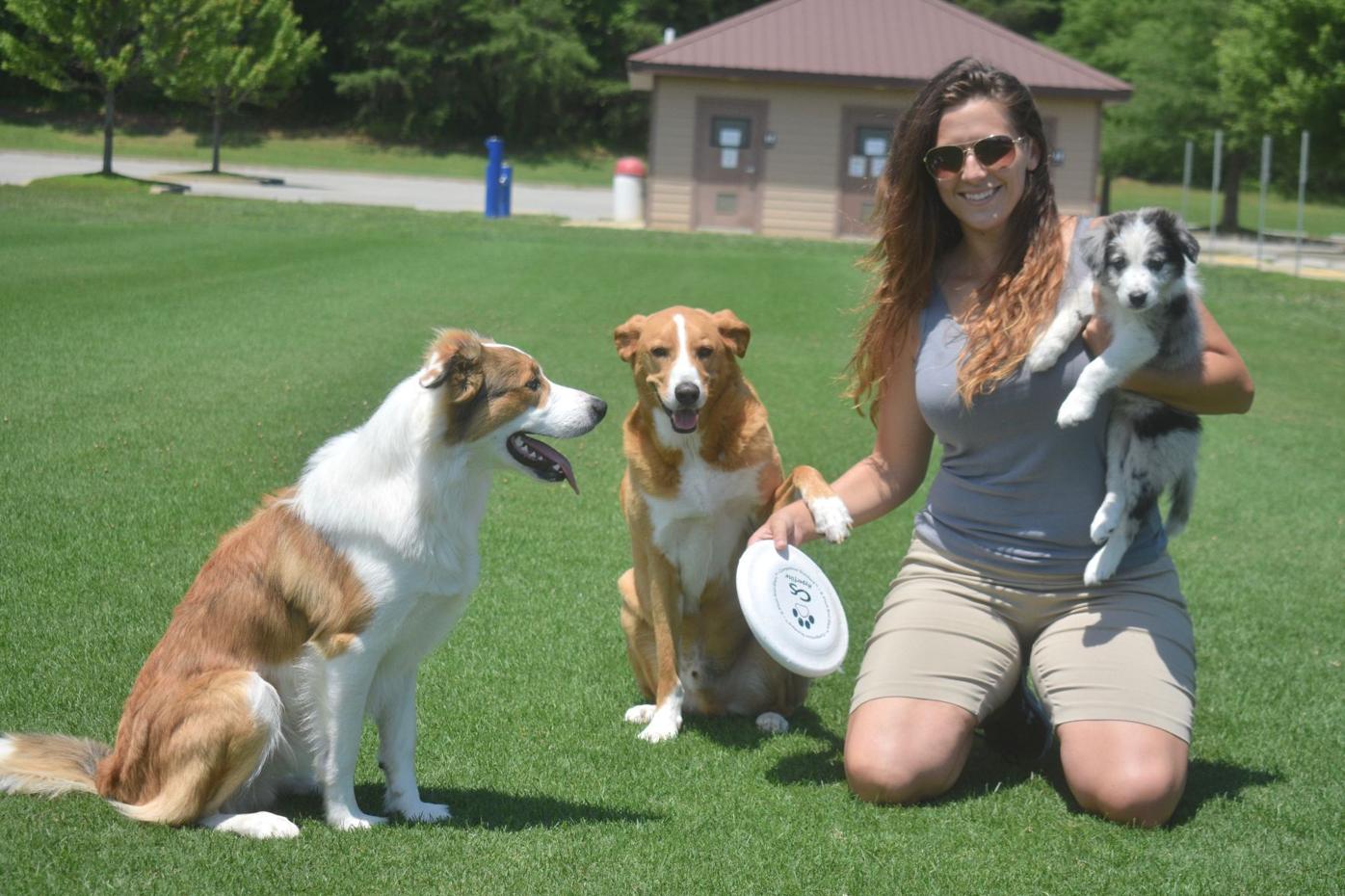 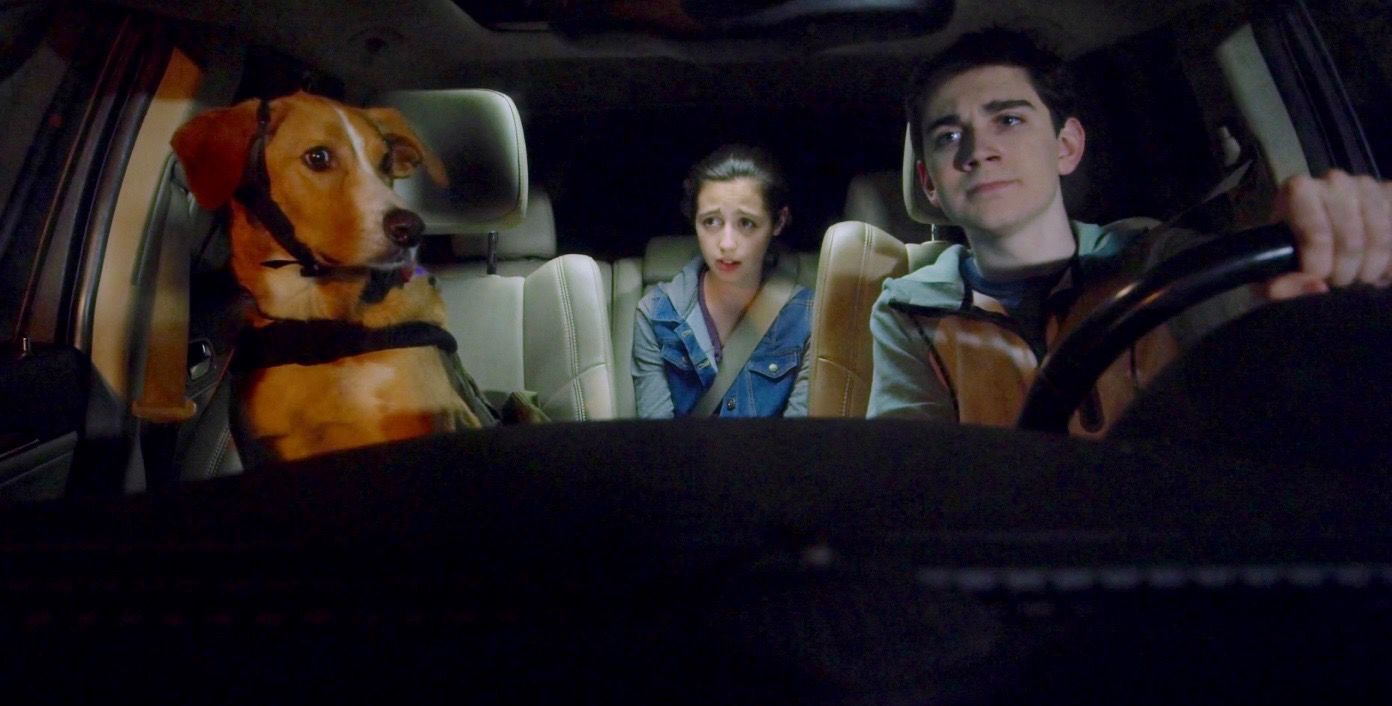 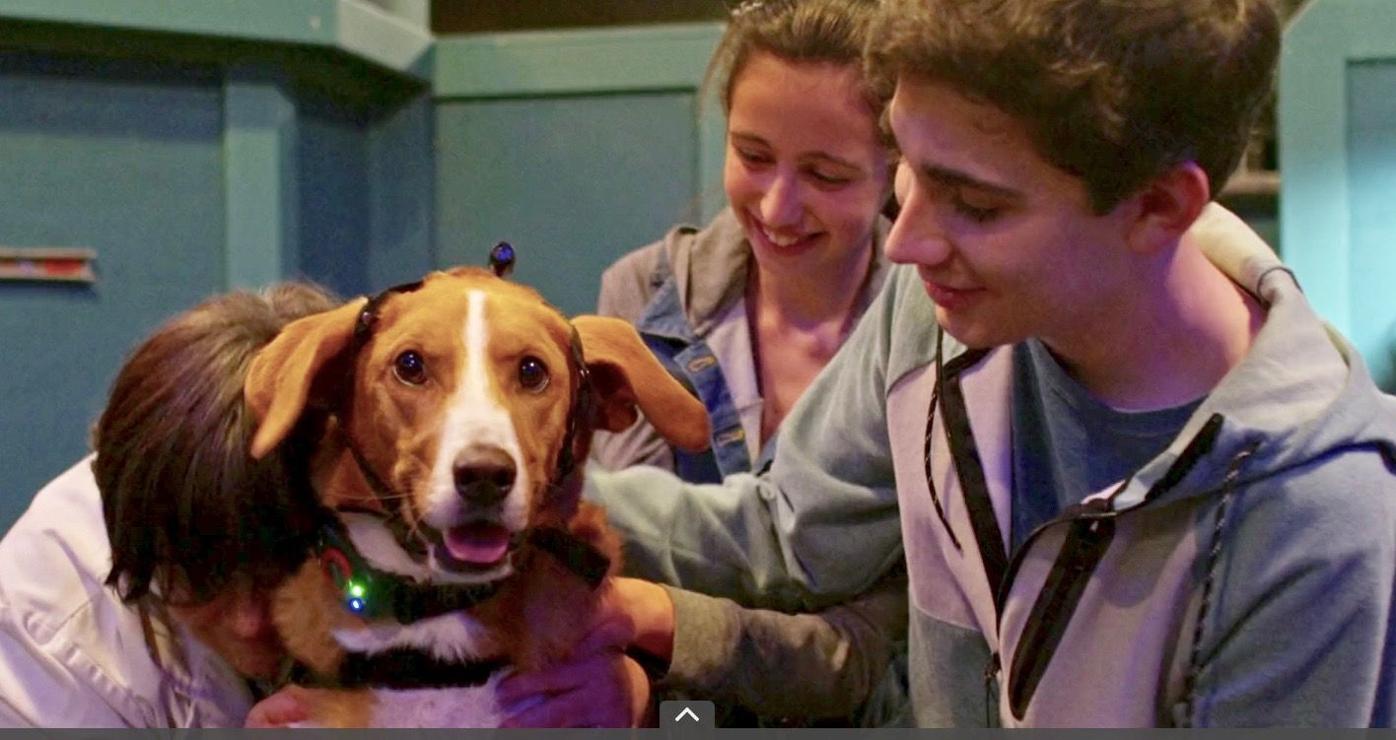 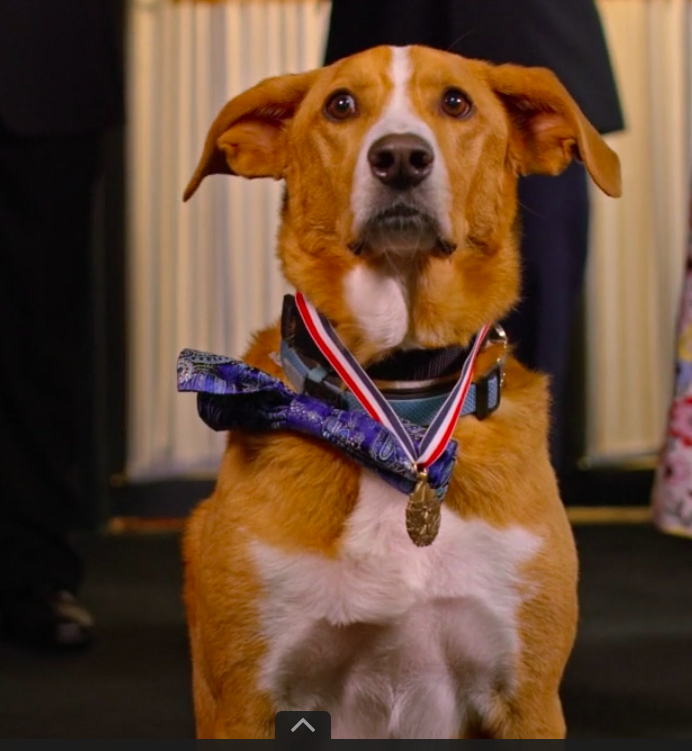 Toby (played by Beasley), stands at attention with a medal he earned after foiling the bad guys in a scene from “Agent Toby Barks.” 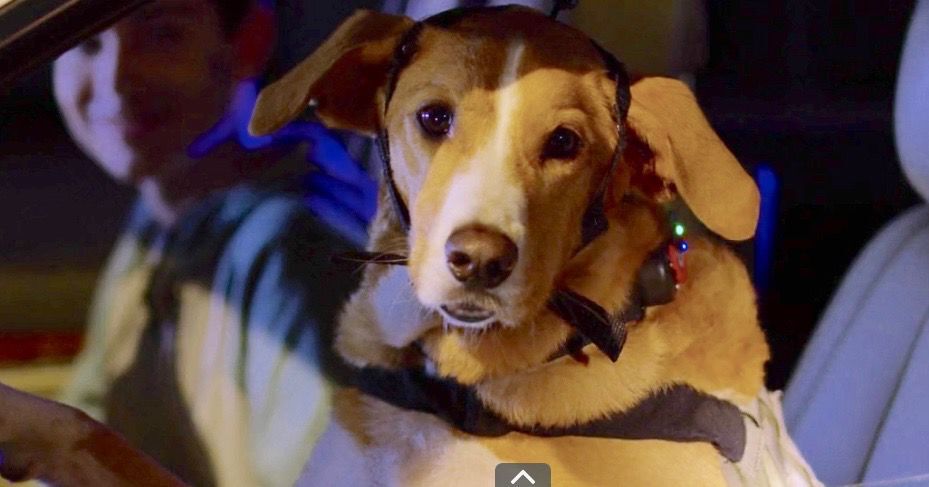 With Bret (Jonah Coplelli) in the passenger seat, Toby tries to talk his way out of a speeding ticket in a scene from “Agent Toby Barks.” 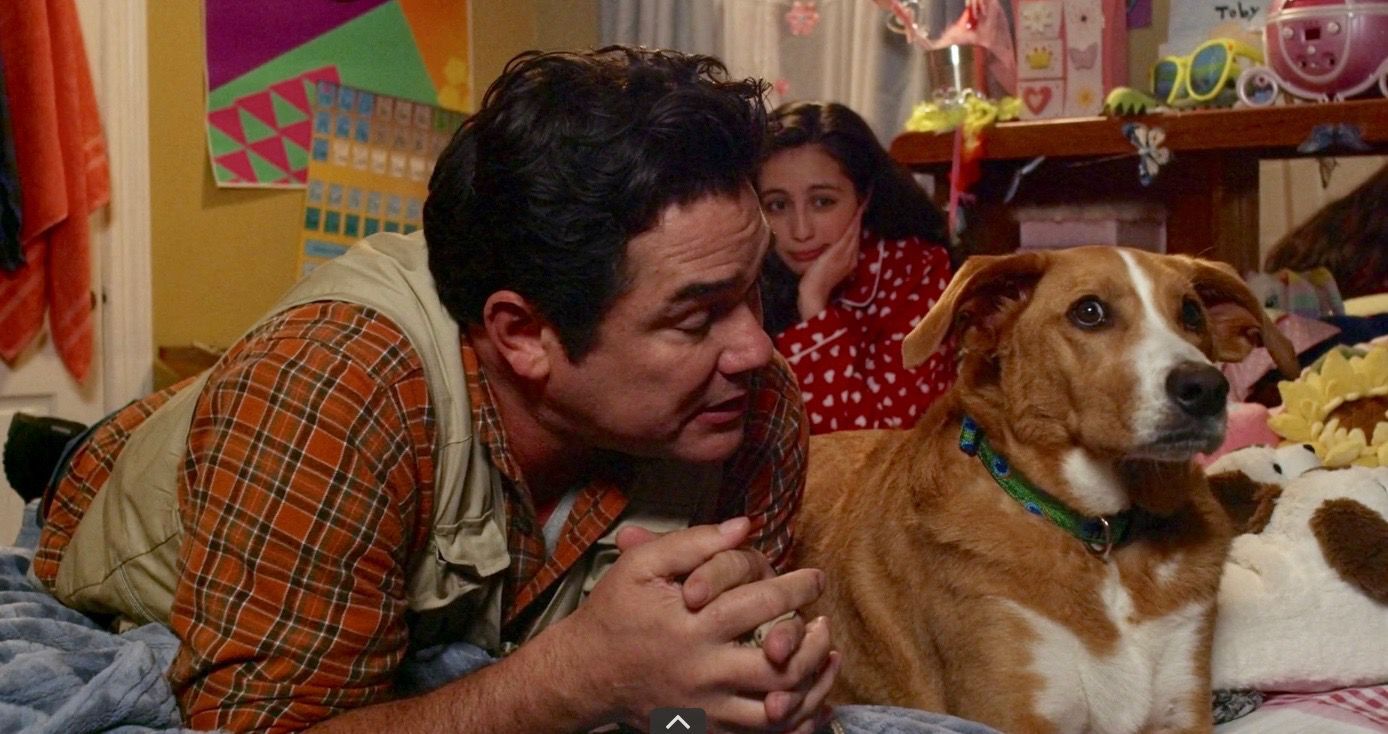 Beasley, who is the 2018 National Stunt Dog Champion, recently starred in “Agent Toby Barks,” a Lionsgate movie that was released earlier this year.

Toby (played by Beasley) searches for information on the computer in a scene from “Agent Toby Barks.”

Toby (played by Beasley), stands at attention with a medal he earned after foiling the bad guys in a scene from “Agent Toby Barks.”

With Bret (Jonah Coplelli) in the passenger seat, Toby tries to talk his way out of a speeding ticket in a scene from “Agent Toby Barks.”

Beasley is a stunt dog champion who has appeared in television commercials. Now the Lusby 5-year-old is fighting off the bad guys.

In his first feature film, Beasley portrays a talking dog named Toby who must eliminate all sorts of nefarious characters in “Agent Toby Barks,” which was released in April.

“It was such a wonderful experience working with [Living The Dream talent agency] and Beasley was wonderful,” said Beasley’s owner and trainer Chrissy Joy. “Once you spend a month with people on set you just have this family atmosphere and camaraderie. It was great.”

“We typed in professional movie animal wranglers, specifically dog trainers, and probably after a few websites of poking around we saw our dog Beasley,” director Tom DeNucci said. “We saw photos and it was a you-know-it-right-away thing. We were sent footage of him following Chrissy’s commands and I said to myself, ‘Well, geez, if he can do all this stuff then we’re good and we’ll have a very smooth shoot.’”

“LTD called me and said, ‘I think Beasley is the perfect dog for this,’” Joy said. “I told him, ‘You’re not going to find another dog that’s going to do what you want.’”

Toby is your everyday dog loved by father Ted (Cain) and his kids Bret (played by Jonah Coppolelli) and Kate (Charlotte Ciano). But by night, Toby is a secret government operative who takes down the antagonists.

He squashes a plot by Horace the Horrible and later has to foil a plan by smarmy, gum-chewing Agent Lane (portrayed by Fred Sullivan), who plans to steal an invention by Auntie B (Casey Seymour Kim) that translates dog barking into words.

Beasley was required to perform many tricks in the film, such as steering a car, heading into the Bark Cave on cue, putting his paw on a scanner and moving a computer mouse.

“I had done an animal movie before (2016’s Arlo: The Burping Pig), so based off what I learned I put some things in the script,” DeNucci said. “And it was like music to my ears when Chrissy said, ‘We read the script and he can do everything and then some. This is going to be a breeze.’” I’m like, ‘Work a mouse? What?’ because I was just picturing him sitting still behind a computer.”

There was also no need for the use of a puppeteer, who will generally make fake dog legs for such scenes as driving a car.

“The amount of stuff they wanted [him to do] was so challenging,” Joy said. “But when they got Beasley on set they didn’t need him anymore because he was able to do everything himself. They were thinking they were working with a dog, but Beasley is more like a human. He’s way advanced.”

Joy – who plays two small parts in the film; as a scientist and as a guard — is a seasoned actress who has appeared in “Gossip Girl,” “30 Rock,” “The Good Wife,” and was Abbie Cornish’s stunt double in the 2011 movie “Limitless” with Bradley Cooper.

“The first day I’ll never forget, they said, ‘We don’t know if he’ll be able to do this. We may have to cheat it or cut around it to make it look like he did it, but we’ll see,” Joy said, referring to a scene in which Beasley had to run into a shed and put his paw on a digital scanner. “And Beasley nailed it and their jaws dropped. He’s extremely good with detail and has unlimited stamina and patience; you have to remember that set work is ‘I need you to do it perfectly 50 times,’ so you really need that stamina.” The crew filmed overnight for a month in March 2019 in Rhode Island and on weekends Joy drove back to Maryland for live shows each weekend.

“I was his chauffeur and he slept,” Joy said.

Beasley, who was rescued from a facility in Pennsylvania at the age of 9, has two more movies lined up; Elijah and George, which will be filmed in Virginia, and Silent Bark. Beasley is also an American Kennel Club Trick Dog performer and the 2018 National Stunt Dog Champion. He has also appeared in various national television spots, including Chewy.com.

Joy discovered she had a knack for training when she brought Beasley to Bone-A-Fied Friends Forever Pet Services, a champion dog training facility in Brandywine run by former Maryland State Police officers Chris and Jack McCauley.

“I brought Beasley there and when they saw us they said, ‘Hey, we really think you should become a trainer,” said Joy, who is now a head trainer/animal handler for the facility.

Over the years, she has trained many different types of animals. She even taught a fish named Dr. Fishy to swim through a hoop and a horse to water to drink “to dispel the myth.”

“I think it’s about finding what are your goals for your dog and finding out what motivates them the best, so by finding what motivates them is important,” Joy said when asked the keys about training animals. “All dogs are looking for a payoff. They’re all about what’s in it for me and not in a selfish way, but in a natural way. When you find out what works best for them, they’ll be naturally driven to work for you and give you the results you’re looking for.”

She stressed that trainers should always follow up a negative with a positive rewards, such as food or toys.

“A lot of people try and control their dogs moves every moment or reprimand them for things,” she said, “and they don’t know why their dog doesn’t listen, but it’s because they actually never showed them what they should be doing. It’s all about positive reinforcement.”

But animals are also therapeutic for Joy, who has a history of anxiety and depression.

“When I was young, animals were the only thing that would get me out of the house because they calmed me and I felt safe, so that was a driving force to continue down that path” said Joy, whose live shows include messages of self-esteem and anti-bullying. “Mental health awareness is huge. That’s a driving force for me because I feel if I’m going to do anything in this world it needs a deeper impact than ‘Just look at my dogs they’re cute.’ It’s call to action to help other people.”

Like everyone else, COVID-19 has affected Joy, who has had to cancel more than 10 live shows and a pair of other jobs. She and her dogs are next scheduled to attend Dogfest Oct. 10 at the Charles County Fairgrounds.

“This was the movie of a lifetime and I’ll say that because when you bring your dog on set they want your dog to act like a dog,” Joy said as she watched Beasley and Whidbey scamper around a Dowell park. “This movie was the trainer’s dream because they wanted my dog to be a trick dog and that’s what I passionately train, so I was able to utilize what I worked so hard to achieve with my dogs.”

Joy said seeing her hard work with animals — which also brought her out of anxiety and depression — was rewarding because she got to see it serve a purpose in the film, which she said is to inspires kids to work with their dogs.

“I was definitely blessed to have that opportunity.”

For more information on Chrissy Joy, Beasley, Whidbey and Darby, go to www.chrissyjoy.com.