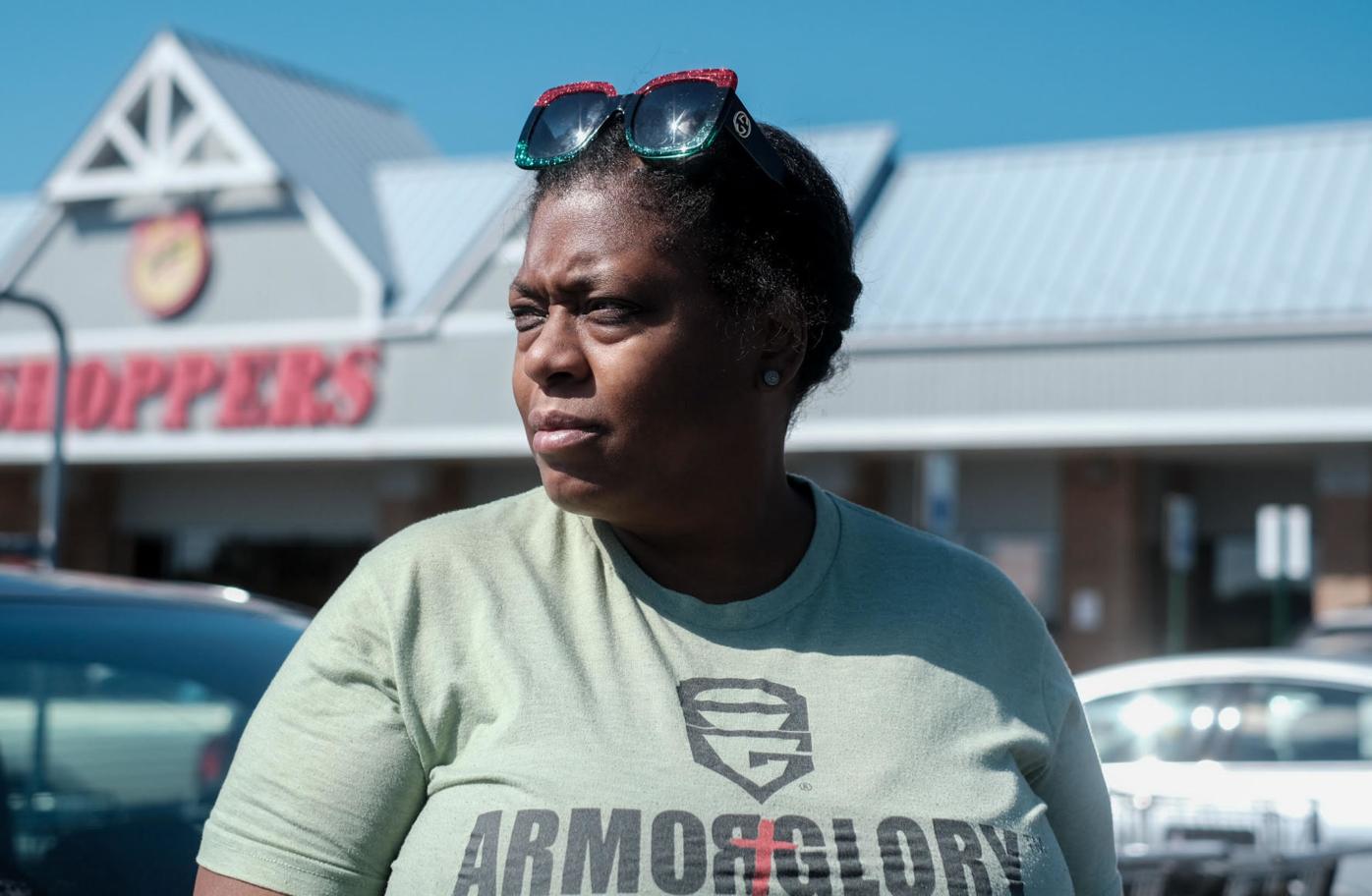 Tyrita B. Franklin of Upper Marlboro stands for a portrait outside of a local grocery store as the spread of the coronavirus disease (COVID-19) continues, in District Heights on Oct. 6. 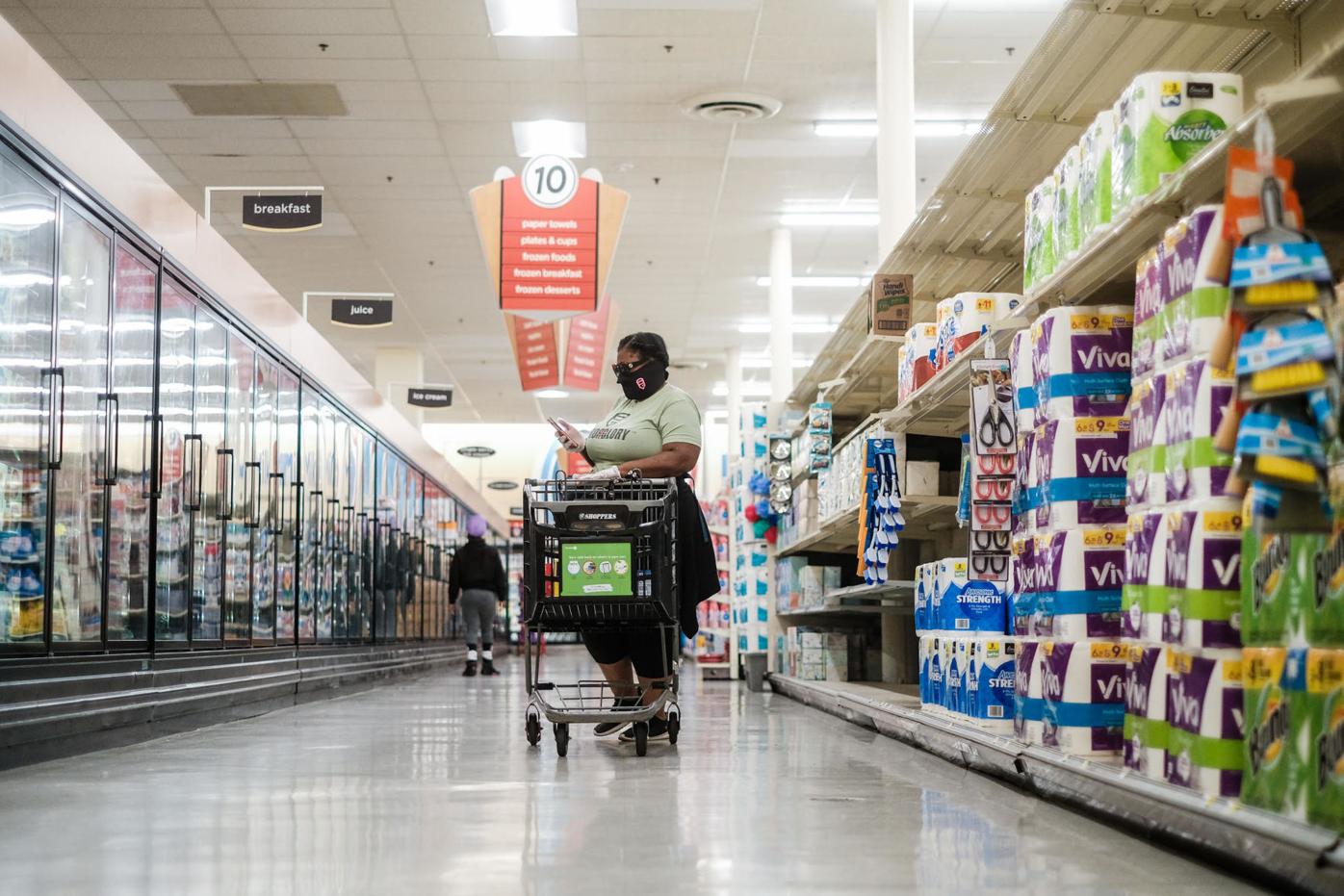 Tyrita B. Franklin fulfills an Instacart order at a local grocery store as the spread of the coronavirus disease (COVID-19) continues, in District Heights on Oct. 6.

Tyrita B. Franklin of Upper Marlboro stands for a portrait outside of a local grocery store as the spread of the coronavirus disease (COVID-19) continues, in District Heights on Oct. 6.

Tyrita B. Franklin fulfills an Instacart order at a local grocery store as the spread of the coronavirus disease (COVID-19) continues, in District Heights on Oct. 6.

The Thomson Reuters Foundation and Omidyar Network recently did a photo essay to “highlight the devastating repercussions of the COVID-19 crisis in the lives and livelihoods of those most vulnerable to the pandemic,” according to a press release.

Tyrita Franklin-Corbett knew she was risking her health delivering groceries during the coronavirus pandemic, but she didn’t expect to be laid up by a dog attack.

Furloughed from her job as an auditor at a public accounting firm in May, the single mother of a 12-year-old son from Upper Marlboro, started to take on more shifts with online grocery pick-up and delivery service Instacart.

Franklin-Corbett, 45, had been an Instacart “shopper” for several years to supplement her salary, but she never imagined the app-based work, with its wild swings in earnings and no health insurance or sick pay, being her sole source of income.

“It’s a gig, not a career,” Franklin-Corbett told the Thomson Reuters Foundation. “When I was in the office, I knew what my paycheck was going to be every day. With this, you do not know. There’s a lot of unknowns, a lot of uncertainty.”

“You don’t know if you’re going to have to carry four cases of water up three flights of steps. You don’t know how much traffic you have to sit in if you want to make 40 bucks.”

Aside from carting heavy groceries and risking exposure to the coronavirus, Franklin-Corbett was bitten on the foot by a customer’s dog in March.

“It was horrific,” said Franklin-Corbett, who had to stop work for two weeks, getting $60 compensation from San Francisco-based Instacart and $1,600 from the customer’s insurance plan.

But with the pandemic sending unemployment to highs not seen since the 1930s Great Depression, more people are joining the growing U.S. army of gig workers, competing for jobs they say pay less and less while trying to avoid contracting COVID-19.

Gig workers are independent contractors who perform on-demand services, including as drivers, delivering groceries or providing childcare — and are one-third more likely to be Black or Latino, according to a 2018 Edison Research poll.

Of these about 1.6 million are part of a growing group of workers to emerge in the past decade, paid by tech platforms like ride-hailing giants Uber and Lyft or food delivery apps like DoorDash and Postmates.

In the past 12 months alone, two million Americans have started freelancing, according to a September study from Upwork, a freelance job platform.

This ongoing shift in the workforce and calls for greater protection for gig workers has put the issue on the political agenda ahead of the Nov. 3 election, with California voters to decide on a landmark state law ruling such workers as employees.

For while some companies and workers praise the flexibility of gig work for juggling families and multiple jobs, some labor activists fear an economic slump will leave gig workers in dire straits with no safeguards like minimum wage or health cover.