Get Started
You have permission to edit this page.
Edit

In this file photo from Dec. 12, 2018, Dana Vickers Shelley, executive director of the American Civil Liberties Union of Maryland, speaks during a news briefing in unincorporated Prince George’s County, near College Park.

One of Maryland’s largest police departments appears to routinely “rubber stamp” the use of force by officers who disproportionately wield it against Black citizens, a plaintiffs’ expert said in a court filing Thursday for a lawsuit accusing the department of racial bias.

Data recently disclosed by Prince George’s County show its police officers used force against Black or Hispanic people in 94% of 6,805 total incidents reported from Jan. 1, 2016 through 2019, the court filing says. Black residents account for approximately 64% of the county’s population of nearly 1 million, while Hispanics account for nearly 20%. County data show 86% of its police department’s use-of-force incidents were against Black civilians and 8% were against Hispanic civilians.

Michael Graham, an expert on police procedures, analyzed the data for civil rights groups that sued the county. The groups had claimed police officials have condoned racism and retaliated against Black and Hispanic officers who complained about white colleagues’ bigoted behavior. In Thursday’s court filing, Graham said the police department concluded that officers were justified in using force in all but 15 of the 6,805 incidents.

“Based on the use of force reports produced, it appears that the command review is doing little more than giving rubber stamp approval to the use of force,” Graham wrote in an updated version of a report that was submitted in June.

Spokespeople for the county and police department didn’t immediately respond to an email seeking comment on Graham’s latest findings.

Hank Stawinski, who had served as the county’s police chief since 2016, resigned in June on the same day that the plaintiffs’ lawyers filed a redacted version of Graham’s report. After accepting Stawinski’s resignation, the county’s top elected official formed a task force to examine areas to possibly reform the police department, including hiring, training and use-of-force policies.

County Executive Angela Alsobrooks acknowledged in June that there are “things that are broken in our police department.”

“Whatever we find that is broken, I assure you that I will fix it,” she said.

In October 2017, Stawinski said the U.S. Justice Department was investigating allegations that the department’s employment practices discriminated against Hispanics and Blacks.

The American Civil Liberties Union of Maryland represents several current and former officers who sued the county and Stawinski in December 2018. The suit seeks unspecified monetary damages, including punitive damages, as well as a court order requiring the county to abolish racial discrimination within its police department.

Graham said county data shows 19 officers were responsible for 685 uses of force, a disproportionately large 10% of the total number reported. Fourteen of those 19 officers are white, he said.

Graham said he reviewed police reports covering 1,219 uses of force since Jan. 1, 2016, and didn’t find a single instance in which a command officer did not concur that the use of force was reasonable. Instead, Graham said he found extensive evidence that the department has “persistently and systemically failed to enforce its policies regarding civilian interactions, particularly complaints of racial bias.”

The Washington Post reported Tuesday that the police department’s early-warning system flagged an officer months before he fatally shot a man in handcuffs. Cpl. Michael A. Owen Jr. triggered the system by using force twice in quick succession last summer, but his supervisors hadn’t been formally notified until January and didn’t act before Owen killed William Green in the front seat of his police cruiser on Jan. 27, the newspaper reports.

Graham said he found “significant deficiencies” in the department’ early-warning system that failed to identify all officers who should be reviewed. “By underreporting, the Department has undermined the purpose of the reporting system, which is to identify officers before they become a problem to the community,” he wrote.

A Forestville man pled guilty on Sept. 8 to a federal bank robbery charge, according to a press release from the United States Attorney’s Office.

Donnell Duane Berry, 44, admitted that he committed the crime while on supervised release for a previous federal conviction. The plea was announced by United States Attorney for the District of Maryland Robert K. Hur, Special Agent in Charge Jennifer C. Boone of the Federal Bureau of Investigations, Baltimore Field Office and Interim Chief Hector Valez of the Prince George’s County Police Department.

According to the guilty plea, Berry and two other individuals committed the robbery of a bank in Lanham on Sept. 4, 2019. Berry had previously committed a robbery at the same location.

Berry wrote the demand note and provided it to his co-defendant, who entered the bank and provided the note to the teller while Berry and third individual waited in a getaway car.

The victim, in fear for her life, gave the co-defendant over $4,000 in United States currency along with a GPS tracker.

The co-defendant took the cash and fled the bank, getting into the waiting getaway car. As detailed in the plea agreement, a short time later police located the getaway car, which was disabled in an intersection approximately five miles from the bank.

Berry and the other robbers attempted to run from the police, but all were subsequently apprehended. Underneath the deck of a house near the intersection, officers recovered the hat worn by the co-defendant during the robbery, the co-defendant’s wallet and $3,050 in cash, which still had the GPS tracker on it.

Near the wood line several yards east of the intersection, officers also recovered a black and gray backpack with Berry’s identification and credit cards in it.

Berry and the government have agreed that if the court accepts the plea agreement, he will be sentenced to between 144 and 204 months in federal prison.

Photo submitted by the Town of Upper Marlboro

Janice Duckett has been elected as a new commissioner in the Town of Upper Marlboro.

Duckett recorded 70 votes, outdistancing challenger Bryan Bontrager, who had 16 votes. Today’s special election was necessitated by the sudden and unexpected passing of former Mayor and Commissioner Wanda Leonard on June 30.

In her campaign, Duckett said that during her term as Commissioner she will focus on three primary areas: economic development, public safety and revitalization of the downtown core, including streets and recreation.

Duckett was officially sworn in on Sept. 14. Mayor Linda Pennoyer, newly elected Commissioner Sarah Franklin, and Duckett will all serve on the board through January 2022, at which time they are all eligible to seek re-election.

Homicide detectives with the Prince George’s County Police Department are investigating a double fatal shooting that occurred on Sept. 10 in Oxon Hill.

The first, on Sept. 10, was a double fatal shooting in Oxon Hill. The victims have been identified as Davonte Simms, 27, of Alexandria, Va., and Kion Scott, 26 of Oxon Hill.

At approximately 9:35 p.m., patrol officers in Oxon Hill responded to the sound of gunshots near the 600 block of Audrey Lane. The officers discovered the victims outside and both were pronounced deceased on the scene.

Additionally, detectives are conducting an investigation into a fatal shooting inside of a home in Clinton on Sept. 11. Preliminarily, detectives do not believe this was a random crime. The victim has been identified as Deandre Clark, 21, of Clinton.

At approximately 1:10 a.m., patrol officers responded to the 6700 block of Danford Drive for the report of a shooting. Clark was discovered inside of the home suffering from a gunshot wound. He was pronounced dead on the scene.

Detectives are working to identify a suspect or suspects as well as a motive in both cases. A reward of up to $25,000 is being offered for information leading to an arrest and indictment in both cases.

If anyone has information relevant to the investigations, they are asked to call detectives at 301-516-2512. Callers wishing to remain anonymous may call Crime Solvers at 1-866-411-TIPS (8477), or go online at www.pgcrimesolvers.com, or use the “P3 Tips” mobile app by searching “P3 Tips” in the Apple Store or Google Play to download the app onto your mobile device.

PGCPD’s Homicide Unit charged a suspect with another fatal shooting that occurred in Oxon Hill on Friday, Sept. 4.

The suspect is 28-year-old Donnell Alphonzo Brown of no fixed address. He’s charged with fatally shooting 26-year-old Justin Easter of Oxon Hill. Brown is charged with first- and second-degree murder, as well as other charges. A court commissioner ordered him held without bond at the Department of Corrections.

Around 9:45 pm on Sept. 4, patrol officers were called to the 600 block of Audrey Lane for a report of a shooting. They discovered Easter unresponsive outside suffering from gunshot wounds. He was taken to a nearby hospital where he was pronounced dead.

The suspect and victim were known to each other and a preliminary investigation revealed the suspect shot the victim during a dispute. 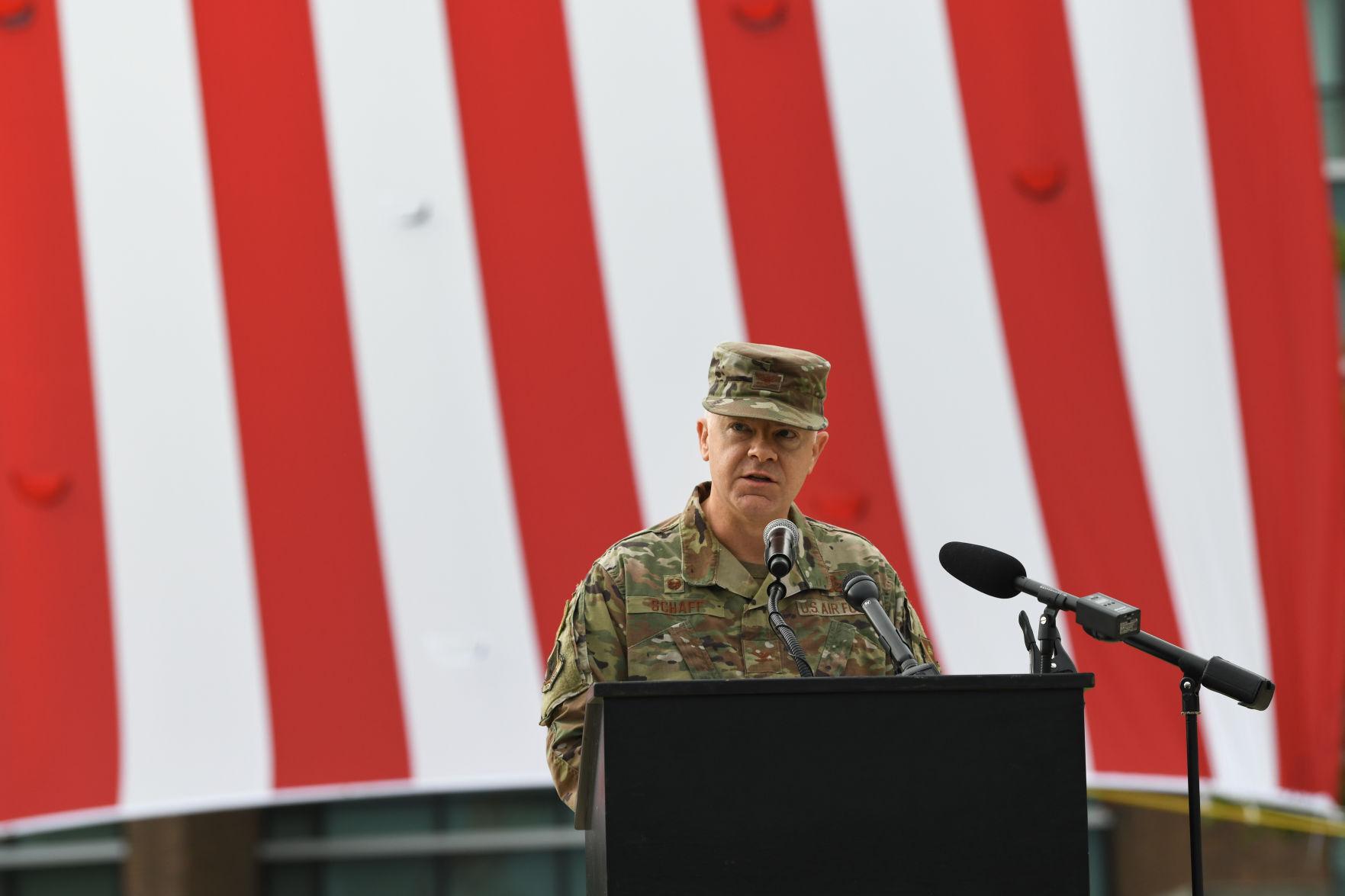 Col. Tyler R. Schaff, 316th Wing and Joint Base Andrews commander, addresses the attendees during the 9/11 remembrance ceremony at Heritage Park on Sept. 11. Nearly 3,000 people lost their lives in the terrorist attacks on America in 2001.