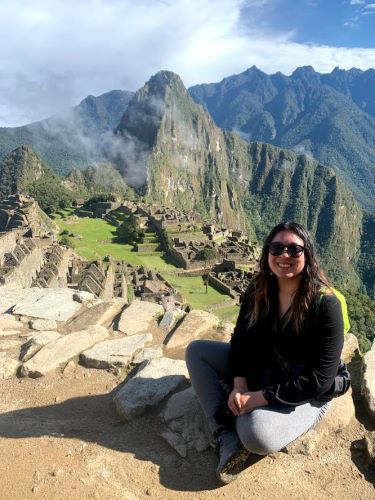 Samantha Hernandez visited Manchu Picchu in the Andes. Her trip was cut short with the pandemic. 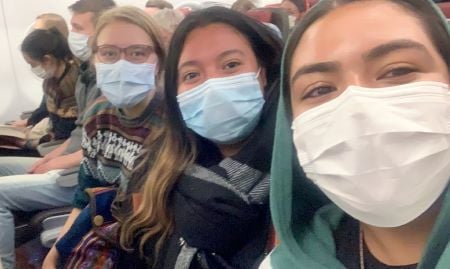 Christina Krewson, Samantha Hernandez and Mayra Arevalo return to the United States after their study abroad in Peru ended early due to the coronavirus.

Samantha Hernandez visited Manchu Picchu in the Andes. Her trip was cut short with the pandemic.

Christina Krewson, Samantha Hernandez and Mayra Arevalo return to the United States after their study abroad in Peru ended early due to the coronavirus.

University of Maryland Eastern Shore senior Samantha Hernandez was walking down a street in Cuzco, once Peru’s ancient capital, the morning of March 22 when police stopped her for not wearing a mask.

Peru was among the leading western hemisphere nations to take aggressive steps early on to stem the spread of the coronavirus, which included toque de queda — a strict curfew. Local authorities embraced a strategy of wearing face masks in public, a directive Samantha missed as she focused on hunkering down and simultaneously trying to arrange a return to the United States.

The exercise science major is back home in Prince George’s County after a successful two-week self-quarantine — and plenty of time to mull a foreign exchange student experience for the ages, according to a news release from the university.

Although reluctant to take credit, her selflessness in the midst of a global health crisis also helped nine fellow foreign exchange students return safely to the United States.

At the urging of Carol Champagne, an English and modern languages professor, Samantha qualified last fall for the U.S. Department of State’s Benjamin A. Gilman Scholarship Program, which assists “students of limited financial means to study or intern abroad.”

Her senior-year spring semester would be spent high in the Andes mountains, the land of the Incas two miles above sea level.

Arriving Jan. 16, Samantha settled into an internship working at a hyperbaric chamber clinic that treats patients with altitude sickness — a condition she mildly experienced just getting dressed early in her stay. Working at the clinic provided her valuable hands-on experience performing health-care related duties she needed to fulfill a graduation requirement.

As COVID-19 closed in on the Americas, Samantha sensed her semester abroad might end before it was supposed to on May 8.

When Peru’s president on March 15 ordered the nation’s borders closed and gave people 24 hours’ notice to leave the country, the aggressive step created an international stir that got Samantha’s attention.

“I was living history in the making,” she said.

She also conceded she might be stuck in the country indefinitely, but wasn’t “too worried.”

In a phone call home, she told her mother, “I’m fine. I’m well-adjusted. I’ve got good connections with people who offered to help me and I can speak Spanish.”

As a scholarship recipient through a federal government agency, she reached out to the U.S. embassy in Lima and the Knowledge Exchange Institute, which coordinated her travel and insurance coverage in case of emergency.

A pandemic, obviously, qualifies as an emergency. Arranging a flight out of a nation with closed borders proved daunting. The Peruvian government’s swift action had left thousands of foreign nationals in limbo.

“I remember thinking ‘if we do get a flight (out), it would be a miracle’,” she said. She and her American roommate packed their belongings but also bought two weeks’ worth of groceries. “Be prepared for quarantine.”

A week after Peru’s government took drastic actions, Samantha and her roommate walked to a nearby grocery store packed with people all wearing masks.

The store wouldn’t let them enter, so they headed back to their apartment only to be stopped by police, who interrogated them for ignoring the local directive to keep faces shielded. Samantha wasn’t intimidated, but she worried she might face arrest.

The roommates explained their situation and went home. Samantha later hunted down the face masks, finally locating them at the fourth pharmacy she visited.

The next day, the U.S. embassy alerted her it could get her on a flight for March 25, a week earlier than she initially hoped was possible.

“I’m a Gilman scholar,” sponsored by a federal agency, Samantha said to herself. “I got lucky.”

Her thoughts turned to other American exchange students she had befriended.

“Is there a possibility of them being on the manifest for the same flight,” she asked the embassy. “I feel like this may help them out.”

The embassy was scrambling to gauge how many Americans needed help and told Samantha to have each of her friends send it details about their situation.

After a tense trip to Cuzco’s airport — travel was banned but some cars could travel with special transit permission — and a long wait in line, Samantha and nine other exchange students boarded a plane to Lima, Peru’s capital, the first leg of a 24-hour plus sojourn home.

When Samantha arrived at Reagan National Airport in Washington on March 26, her mother waited anxiously. She and two companions traveling from Peru were the only passengers on the flight from Miami wearing masks.

“My mom wanted to hug me so bad,” Samantha said. “But she can’t. My biggest fear is being a carrier (of the virus).”

Her family brought large refuse bags to shield her luggage and sanitizing agents to keep her family as safe as possible for the short ride home to Lanham, where Samantha isolated herself for the recommended 14 days.