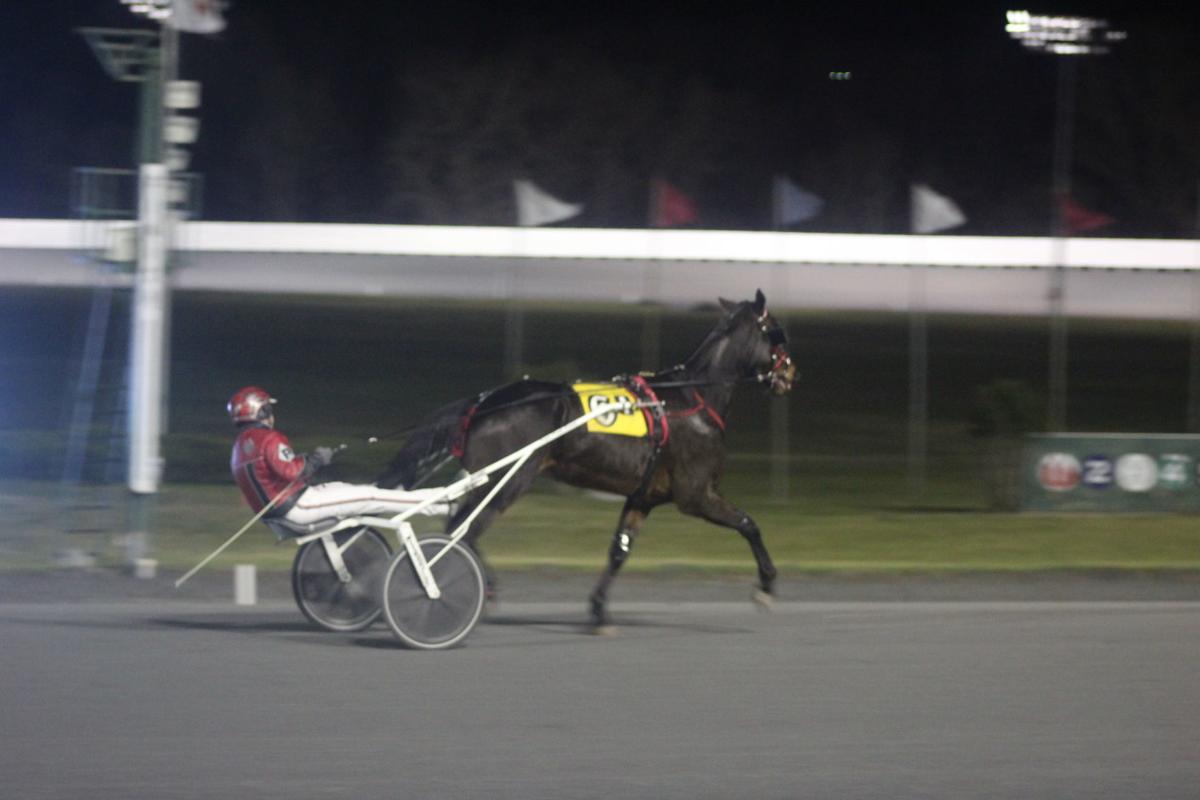 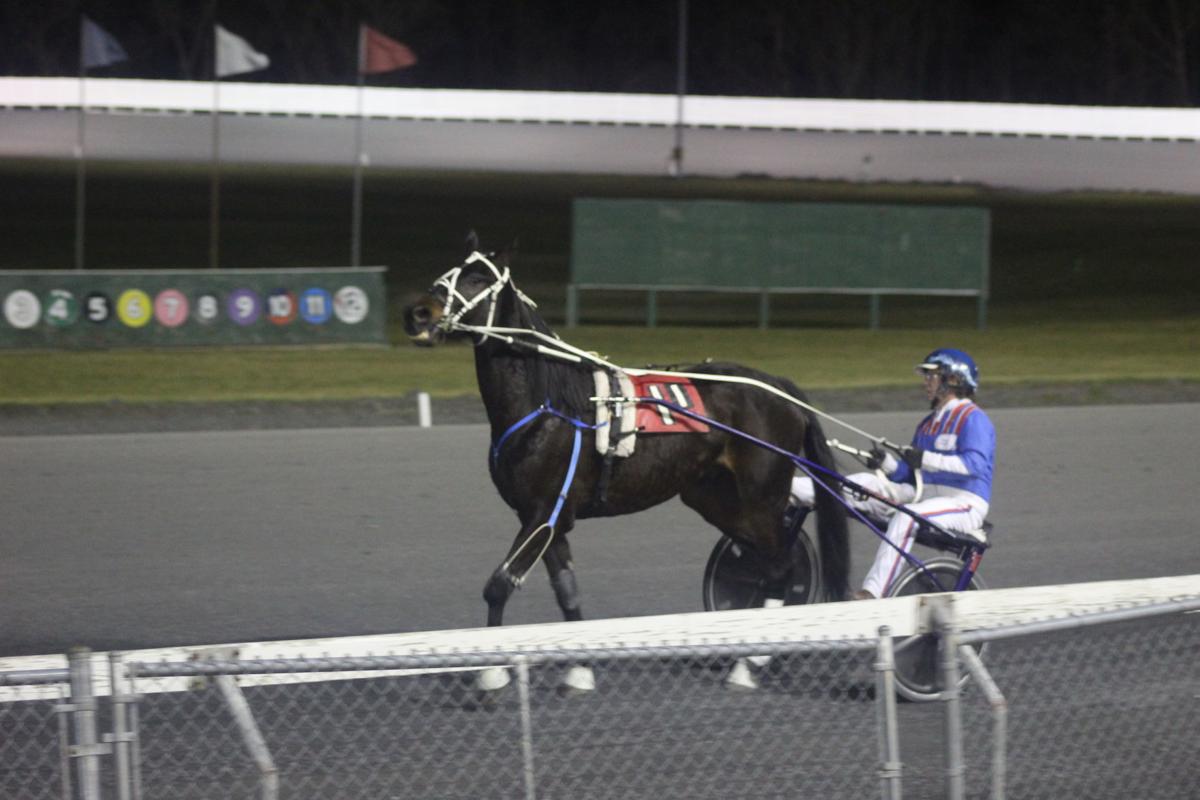 Senior Dinero (Jackie MacLeod) takes his final warm up lap for the $10,000 Open Handicap for trotters that kicked off the Sunday card at Rosecroft Raceway. 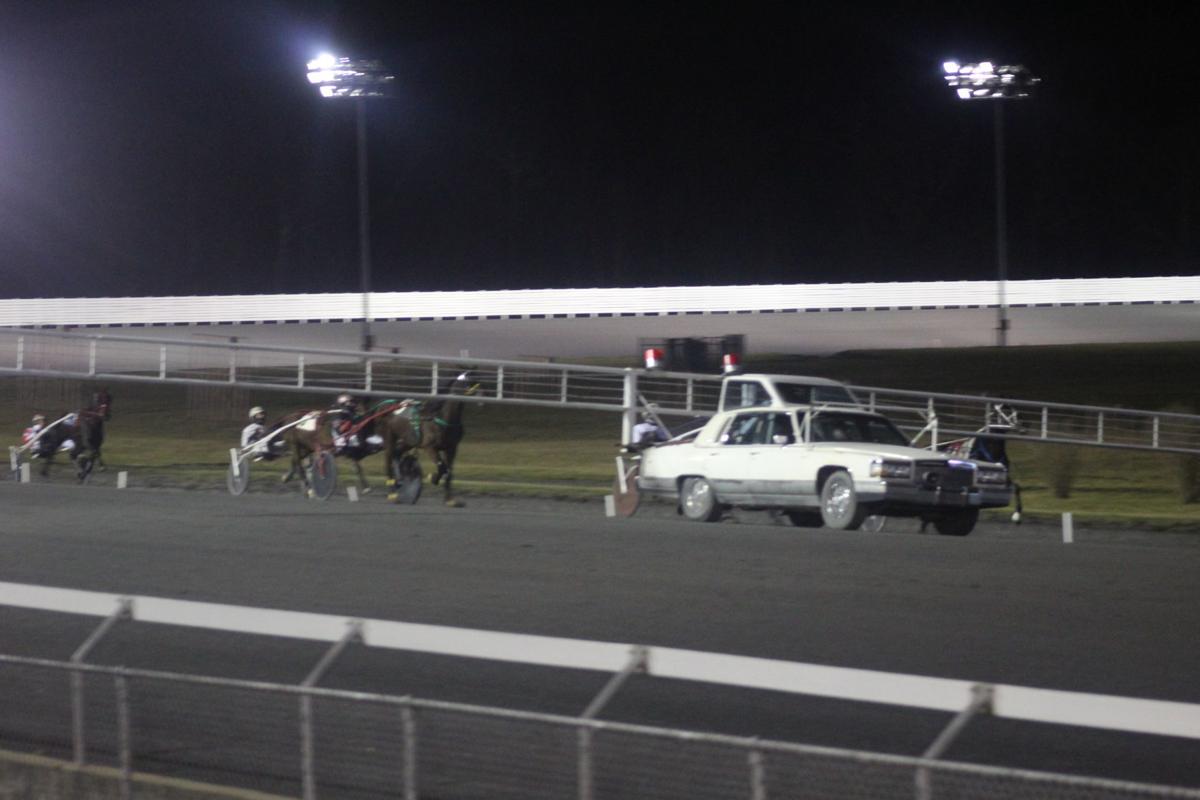 Trotters approach the starting gate for the $10,000 Open Handicap that kicked off the Sunday program at Rosecroft Raceway. 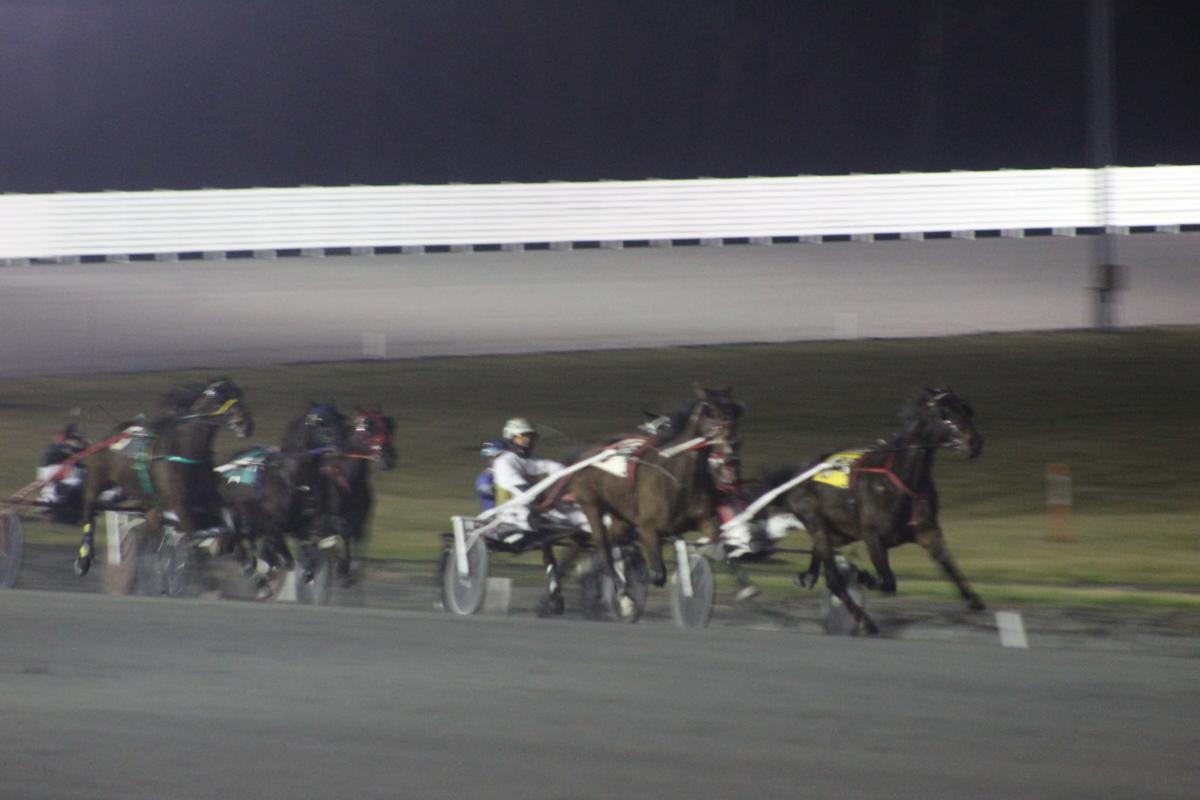 What That Is (Roger Plante Jr.), right, and Believe In Him (Sean Bier) battled to the wire in the $10,000 Open Handicap for trotters, the opening race on the Sunday card at Rosecroft Raceway.

Senior Dinero (Jackie MacLeod) takes his final warm up lap for the $10,000 Open Handicap for trotters that kicked off the Sunday card at Rosecroft Raceway.

Trotters approach the starting gate for the $10,000 Open Handicap that kicked off the Sunday program at Rosecroft Raceway.

What That Is (Roger Plante Jr.), right, and Believe In Him (Sean Bier) battled to the wire in the $10,000 Open Handicap for trotters, the opening race on the Sunday card at Rosecroft Raceway.

Last Sunday’s opener was the $10,000 Open Handicap for older trotters, Believe In Him (Sean Bier) overcame a first over journey and wore down What That Is (Roger Plante Jr.) on the far turn and in the lane to prevail by a neck in 1:55.4. It was the second win of the week for the 6-year-old Conway Hall mare trained by James Brown for owner Betsy Brown.

“She raced really good the last two starts,” said Bier, who recorded his 2,500th career victory with the trotting mare on the Wednesday card at Rosecroft. “It’s always tough for a mare to beat the boys. But she’s been able to do it twice in one week.”

Several races later in a non-winners of seven races or $75,000 lifetime class for younger pacers looking to earn their way into the Open ranks, Classic (Tony Morgan) easily lived up to his role as the 3-2 favorite when he gained command in a 26.3 opener then carved out honest fractions en route to a four-length score in an eye-opening 1:50.2.

A 4-year-old Sweet Lou gelding trained by Charlene Sharpe, Classic recorded his second win in three starts over the local strip and now sports a 7-5-3 slate and over $50,000 banked from 35 career tries. Also a winner two starts back in 1:52.3, Classic lowered his lifetime mark by nearly two full seconds and may earn a spot in the Open.

Two races later in a non-winners of $4,000 last four starts class for older pacers, Always A Tiger (Jonathan Roberts) rallied from well off the pace to overhaul loose leader Magnum Mike (Luke Hanners) on the far turn and rolled by him in the lane to a two-length score in 1:54 as the 3-5 favorite.

A 10-year-old Cam Terrific gelding trained by Jason Walters for owner Joseph Plummer of Upper Marlboro, Always A Tiger scored in his seasonal debut and now owns a 38-26-19 slate and $170,000 banked from 195 career tries. A 1999 St. Mary’s Ryken High School graduate, Roberts is rapidly approaching 4,000 wins in his driving career.

Then several races later in the $12,000 Open Handicap for pacers, Rollinlikethunder (Eddie Davis Jr.) rallied from well off the pace and widest of all down the backside and through the lane to overhaul favored Wakizashi Hanover (Allan Davis) to score by a length in 1:52.3 in his seasonal debut.

A 5-year-old Roll With Joe gelding trained by Eli Scott Jr. for owners Danny Warrington and Donald Hawk, Rollinlikethunder notched his 15th win in 50 career tries and pushed his lifetime earnings toward $140,000. Wakizashi Hanover set the early tempo under pressure at two points but gave way in the lane as the solid favorite.

Rosecroft will continue to offer live racing two nights each week during its expanded spring meet, primarily on Sundays and Wednesdays. While all of the Wednesday cards will remain in tact through closing night, May 27, several Sunday cards will be held on different days. Monday, April 13 will replace Easter Sunday and Saturday cards on the first and third Saturdays in May will coincide with the Kentucky Derby and Preakness Stakes.

Rosecroft’s live card on April 13 will also coincide with the 35th anniversary of what is generally regarded as the greatest race in the track’s 71-year history. On April 13, 1985, George S (Walter Case Jr.) and On The Road Again (Buddy Gilmour Jr.) battled to a dead-heat in a leg of the Graduate Series in 1:54.4, at the time representing the fastest dead-heat in the sport on a half-mile oval.

On The Road Again would later make two more starts in Maryland at Freestate Raceway in Laurel, which closed after the 1989 meet. Rosecroft was reconfigured to a five-eighths mile oval that summer and former George Morton Levy Memorial Series hero, Keystone Velocity, holds the all-age track record of 1:47.3 courtesy of his victory in the 2017 edition of the $100,000 Potomac Pace.

Speaking of the Potomac Pace, defending champion Endeavor (Corey Callahan) easily captured the $37,500 Preferred Pace at the Meadowlands last Saturday night for his second win in three starts this year for trainer Jeff Cullipher. Several races earlier at the Big M, Sams Triple Crown (Pat Berry) a fixture in the Open Handicap at Rosecroft in recent years, prevailed in a conditioned event in 1:52.2 for owner-trainer Jerry Nock.

Saturday nights at the Race Book inside the MGM National Harbor Casino have become a haven for harness simulcast players and the bustling facility is run by the MJC’s Brian Barrett. The Race Book is only a compact on the top floor, but it offers ample seating and big screens for interested players, and Barrett learned his craft well from current Rosecroft General Manager Lisa Watts.