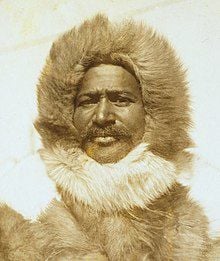 Matthew A. Henson, originally from Nanjemoy, wrote the book “A Negro Explorer at the North Pole.”

Matthew A. Henson, originally from Nanjemoy, wrote the book “A Negro Explorer at the North Pole.”

The Notable Maryland Author articles and associated Fun With Words writers’ prompts are the centerpiece of the program. Each month, The Enquirer-Gazette and other newspapers in the state will feature a Maryland Writers’ Association article about an author. Marylanders are encouraged to read the articles and try their hand at the writing prompts each month.

“I was in the lead that had overshot the mark a couple of miles. We went back then and I could see that my footprints were the first at the spot” — Matthew A. Henson

Genre: Personal Adventure — An autobiography dedicated to describing the process involved, work required, and obstacles overcome to accomplish a specific extraordinary goal, usually involving overcoming the power and strength of the natural world.

Matthew Alexander Henson, (Aug. 8, 1866 — March 9, 1955) was born on a farm in Nanjemoy, moved to Washington, D.C., became a ship’s cabin boy at 12, and traveled to ports in China, Japan, Africa and the Russian Arctic. The ship’s captain took Henson under his wing and taught him to read and write. At age 25, Henson met Robert Peary and spent the next 16 years of his life with Peary on seven Arctic expeditions learning how to reach the North Pole. On April 6, 1909, during their eighth expedition, they reached and conquered the North Pole. In that moment, Henson became the greatest black explorer of all time.

In 1912, Henson published his memoir, “A Negro Explorer at the North Pole.” In it, he described himself as a “general assistant, skilled craftsperson, interpreter (he had learned an Inuit language), and laborer.” In 1937, he was the first African American to be made a life member of The Explorers Club. In 1944, Henson was awarded the Peary Polar Expedition Medal and he was received at the White House by Presidents Harry Truman and Dwight Eisenhower.In 1947, he collaborated with author Bradley Robinson on a biography, “Dark Companion,” which told more about his life. In 1988, he and his wife were re-interred at Arlington National Cemetery and in 2000, the National Geographic Society posthumously awarded Henson the Hubbard Medal.

Readers can submit their responses at the website www.marylandwriters.org/Notable_Maryland_Authors by the 20th of the month to receive an MWA Writers’ Round Table submission certificate. Selected prompts will be published next month. Other information can be found at www.mwawritersroundtable.org.

In September, readers were asked to write hard-boiled crime that takes place in San Francisco in 1929, and to name a private eye, pick and include a San Francisco street and landmark, and describe the pending crime and victim.

Here is a regional selection:

She stepped into my office. I looked and thought, “God, I’m giving you a big ‘Atta-Boy’ on this one.”

“Mr. Arch?” The frosted door of my one roomer read, “Jack Arch Investigations.” Normally, I would’ve cracked wise at the obvious; but her legs convinced me to just nod.

“Mr. Arch, I need your help. I’m Valerie Garrett. My husband lost everything in last week’s crash. I think he’s going to shoot me for some insurance money.”

She said this, tapping her bosom.