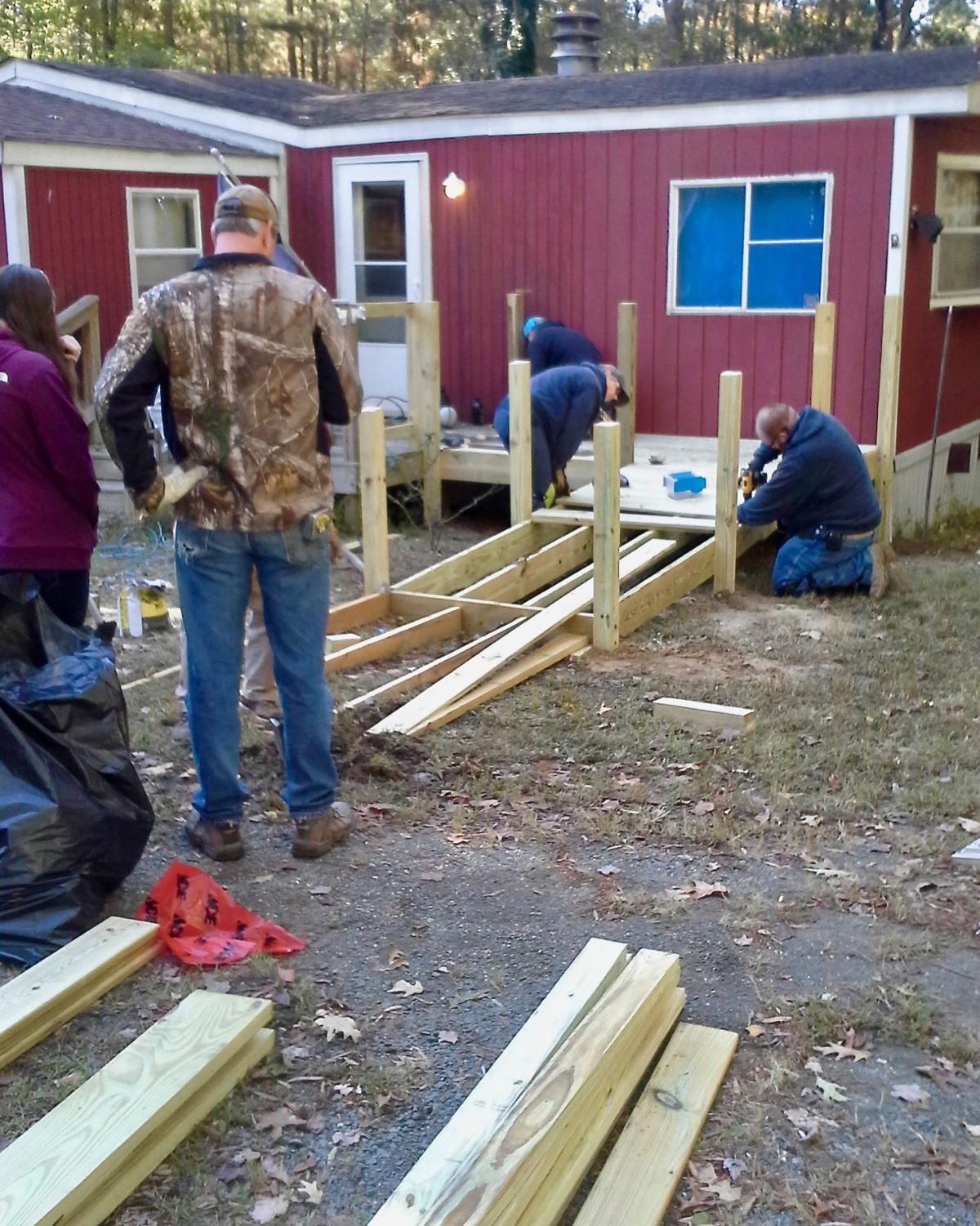 Volunteers with Habitat for Humanity construct a ramp last fall at the Lexington Park home of John Trejo. 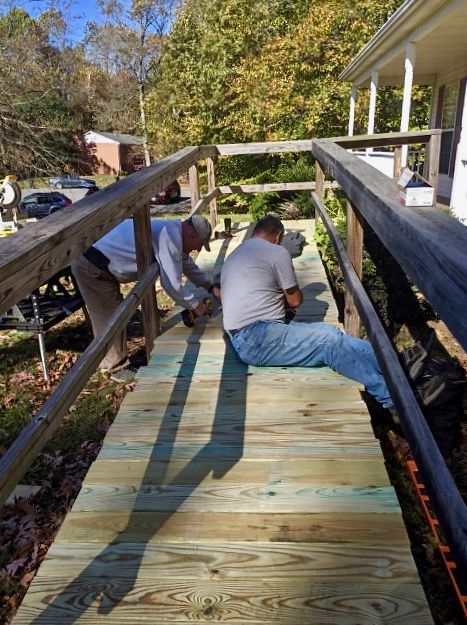 Habitat for Humanity volunteers replace decking on a ramp at the home of Danny Phillips in Owings late last year. 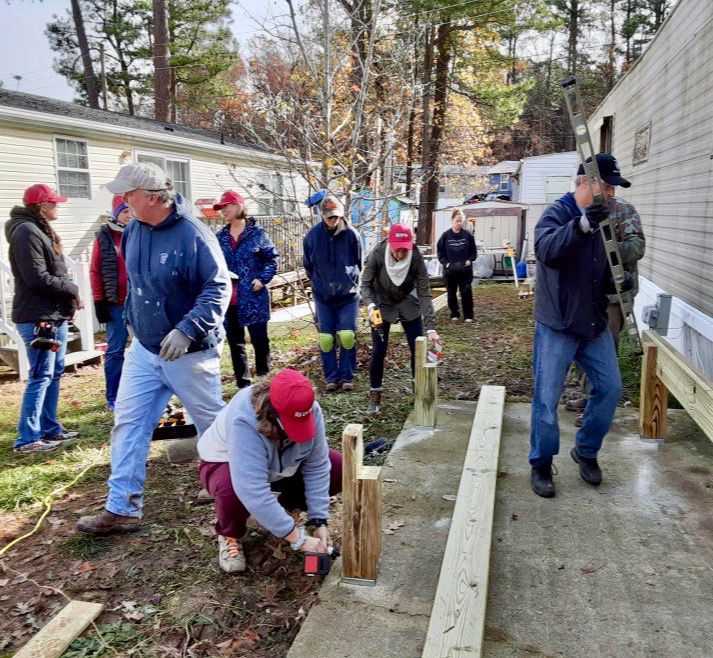 Volunteers with Patuxent Habitat for Humanity work outside the home of Larry Messick, an Air Force veteran.

Volunteers with Habitat for Humanity construct a ramp last fall at the Lexington Park home of John Trejo.

Habitat for Humanity volunteers replace decking on a ramp at the home of Danny Phillips in Owings late last year.

Volunteers with Patuxent Habitat for Humanity work outside the home of Larry Messick, an Air Force veteran.

Throughout last fall and earlier this winter, Patuxent Habitat for Humanity coordinated several major projects at homes of local veterans.

As Patuxent Habitat for Humanity’s Veteran Critical Home Repair Program continues to help local veterans in the community, sometimes their needs are beyond the group’s volunteers’ abilities; that is when we need to call in professional help, according to a release from the organization. This is what happened with Navy veteran Jennifer Shea.

Her HVAC system stopped working just as the temperatures began to drop earlier this winter.

Habitat asked TN Bowes HVAC to check if the system could be repaired, and, due to the age of her system, it was determined the cost of the repairs was greater than the replacement cost for a new system. Through the company’s help with Habitat or Humanity, Shea’s system was replaced just in time for Thanksgiving last November and she and her daughter can now stay warm.

Patuxent Habitat for Humanity in another release thanked Operation Ramp It Up for Veterans, Exelon Militaries Actively Connected, Harvest Fellowship Presbyterian Church, Exelon Generation and Christmas in April Calvert County for support in the building of this ramp for John Trejo at his home in Lexington Park last fall, making World Habitat Day a resounding success.

Patuxent Habitat for Humanity’s Veteran Critical Repair Program along with Christmas in April Calvert County improved the quality of life for Owings resident Danny Phillips, a retired Marine, by providing him safe and sturdy surfaces for unencumbered movement in and around his home. The volunteers from Patuxent Habitat, Christmas in April Calvert, Exelon Militaries Actively Connected and Exelon Generation replaced decking on his ramp, repaired his kitchen floor and added some grab bars in the bathroom to ensure his safety, according to a release. They also pressure washed his siding and pruned a number of trees to allow for maintenance needed on his property.

Volunteers also assisted Ron and Arleen Carlson of Town Creek. Ron Carlson, a Navy veteran with mobility issues, needed repairs made to a recent addition on his home, which was sinking into the ground. Eventually, according to a release from Habitat, the addition was “so uneven that he was unable to move hi chair around easily throughout the home.”

Professional help was needed, and the organization contracted help from the company Premiere Renovations. They leveled the home, just prior to last Thanksgiving.

Patuxent Habitat’s Giving Tuesday project in early December last year was the replacement of the deck at the primary entrance of the home of Larry Messick, an Air Force veteran, and some interior floor repairs. Patuxent Habitat partnered with volunteers from Redfin, Christmas in April Calvert County, Exelon and EMAC, who began early in the morning to remove the existing unsafe deck and areas of the interior flooring that were problematic, according to a release, before rebuilding.

“The amazing dedication of the Redfin volunteers, some that came from almost two hours away and the other awesome groups of volunteers made quick work of all the repairs needed,” according to the release. The Messick family can now feel warmer and be able to come and go from their home without the fear of it falling.

In mid-December, volunteers assisted Army veteran Ray Nahrgang by building a ramp to the primary entrance of his home in Hollywood.

According to a release from Habitat for Humanity, “Mr. Nahrgang helps so many veterans, it is extra special for us to be able to help him feel safer coming and going from his home.” Nahrgang is the commander of the local chapter of Disabled American Veterans, DAV Chapter #26.

These critical repairs were possible through partnering with local companies, Habitat’s annual Warrior 5K Fun Run/Walk fundraiser and a grant from The Harry & Jeanette Weinberg Foundation.

Habitat for Humanity will host an application orientation workshop on Feb. 8 from 10 a.m. to noon at the ReStore in Lexington Park. The group is looking for the next St. Mary’s family to be part of the group’s upcoming house build. Qualifications include residing in St. Mary’s for at least the past year, a yearly family income of between $38,000 and $50,000, a commitment to pay a reasonable monthly mortgage payment and willingness to help build the home. Reservations are required by calling 301-863-6227, ext. 16, or emailing laurie@patuxenthabitat.org.

The Patuxent Habitat for Humanity Veteran Critical Home Repair Program is designed to repair homes for military veterans and their families in St. Mary’s and Calvert counties. To donate or volunteer, call Laurie Walker at 301-863-6227, ext. 16, or email laurie@patuxenthabitat.org.

Patuxent Habitat for Humanity ReStore is located at 21600 Great Mills Road Unit 18A, in Lexington Park. For more information about donating money to the affiliate or to donate items to the ReStore, visit the website www.patuxenthabitat.org.