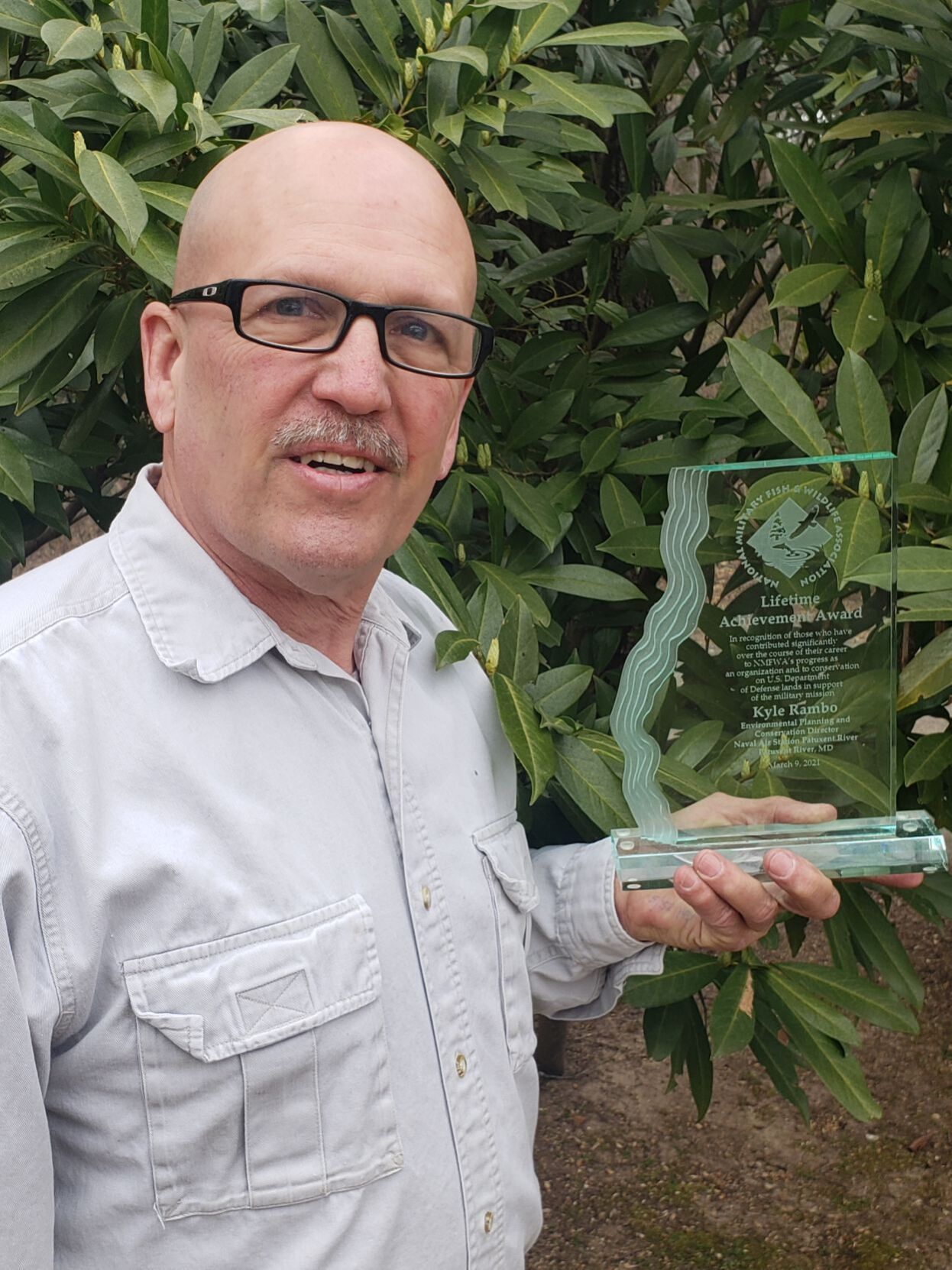 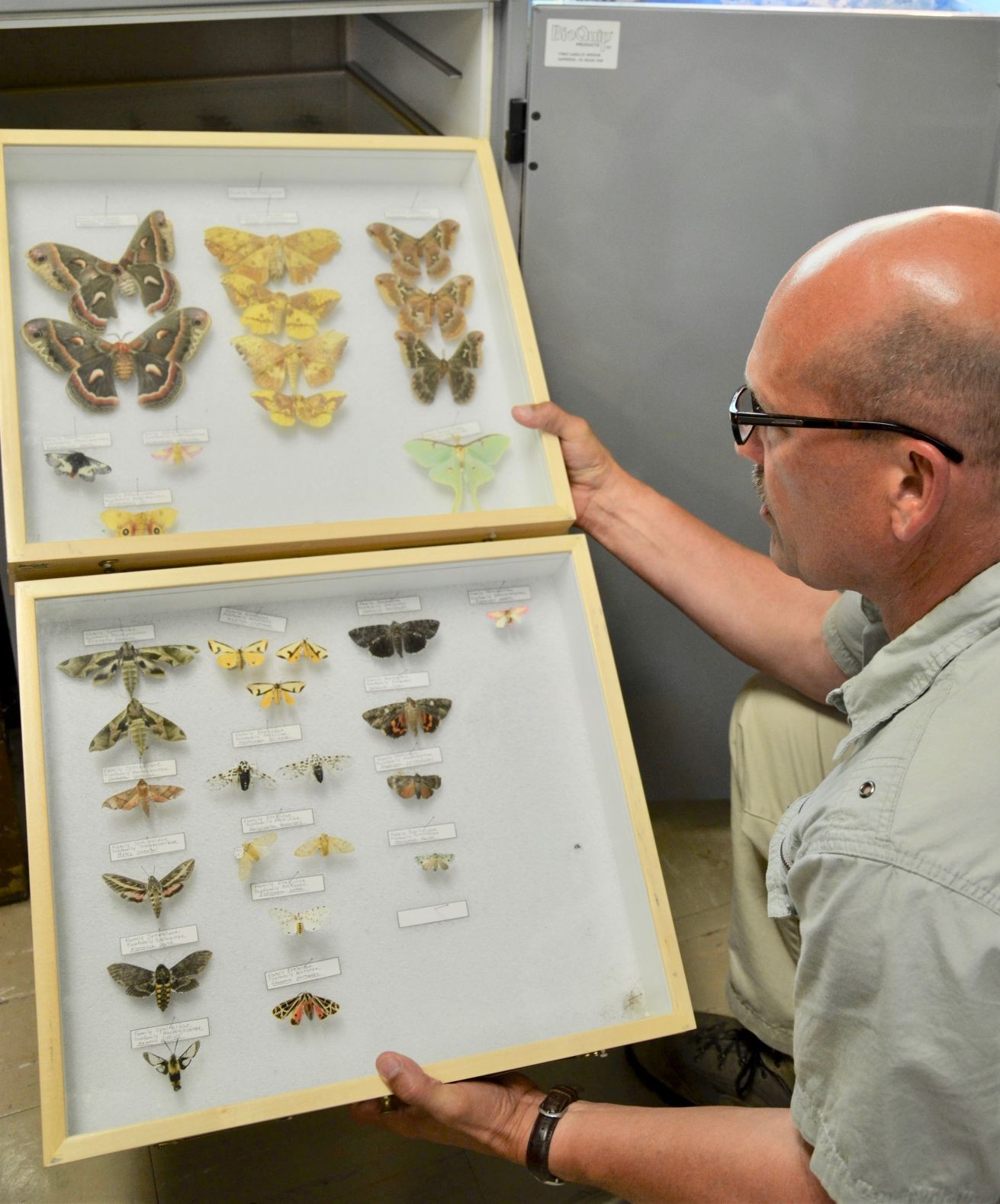 Kyle Rambo, NAS Patuxent River’s environmental planning and conservation director — who has worked onboard the air station for the past 40 years — was recognized March 9 by the National Military Fish and Wildlife Association with its Lifetime Achievement Award.

“I’m honored to receive such an award,” Rambo said during a virtual awards ceremony. “It’s recognition from my professional peers, validating the worth of a 40-year career. When I look at the list of previous winners, I see the names of prestigious leaders in the field — people I looked up to and learned from in my early career — and I’m humbled.”

Through the years, Rambo has been instrumental in ensuring Pax River complies with federal regulations protecting natural resources in a manner consistent with no net loss to military mission capability, and encouraging problem-solving strategies, science, management, projects, and partnerships.

“Kyle’s contributions to the DoD and Navy as a whole are vast,” said Installation Environmental Director Lance McDaniel, who has worked with Rambo since 2009. “But to Pax River and its mission, they’re almost immeasurable.” Understanding Pax’s unique test mission required specific actions to minimize costly wildlife/aircraft interactions, and Rambo stood up one of the first Bird/Animal Aircraft Strike Hazard programs in 1984 when deer strikes occurred about three to five times per year. At the time, and for many years afterward, it was recognized as a model for the Navy. Thinking outside the box, Rambo worked with statisticians and wildlife biologists to change deer behavior through habitat management.

He had several universities come up with a deer population algorithm and implemented a scientifically and statistically sound spotlight deer count to determine a harvest objective based on the years only one strike was encountered. He also planted agriculture fields as a natural fence line around the airfield.

“Deer are browsers and eat with their head down, walking until they’ve satisfied their desire,” McDaniel explained. “By planting soybeans — which are too large to attract birds — between the woods and runways, the deer will come out of the woods, encounter the soybeans, fulfill their protein requirements and return to the woods [without broaching the runway].”

Normal whitetail deer have a home range of up to 2.5 square miles, but at Pax River, that has been lessened to 2/10ths of a square mile on average, reducing strikes now to about one every five years, McDaniel said.

“Kyle’s thinking, along with his experience of animal behavior here, has increased mission productivity, as well as saved millions in aircraft damage and no telling how many potential lives of pilots,” McDaniel said. “Kyle has built a talented staff of subject matter experts and has energized hundreds of youths in this field,” McDaniel said. “I think it speaks volumes that he chose to stay here at Pax when obviously he could have been at the Pentagon level. Over the years, his reputation preceded him and those at that level still reach out to him from across all services with questions. I couldn’t respect anyone any more than I respect him.”

Rambo also established the DoD Partners in Flight Program, is a member of the DoD Partners in Amphibian and Reptile Conservation Network, establishes and registers the Patuxent River Christmas Bird Count with the National Audubon Society while acting as the official compiler of data, including that for Pax properties for the past 25 years, and serves as the regional coordinator for the last three Maryland/DC Breeding Bird Atlas efforts.

Under Rambo’s environmental stewardship, Pax River was the first naval installation to be named a Tree City USA by the Arbor Day Foundation — a recognition it has since earned for the past 32 years.

“He has built an outreach program that sets the bar in the Navy to ensure community involvement in support of Navy programs,” Natural Resources Specialists Jackie Smith and Jim Swift wrote in Rambo’s nomination.

Rambo credited his success to surrounding himself with good people and heeding their counsel.

“At the top of that list are the two people who nominated me, Jim Swift and Jackie Smith, coworkers who are both well-respected professionals and subject matter experts who’ve worked with me for over half my career,” he said. “I’m grateful for their support and that of all the members of our conservation team, as well as the incredible Command support for the program at Pax River.”