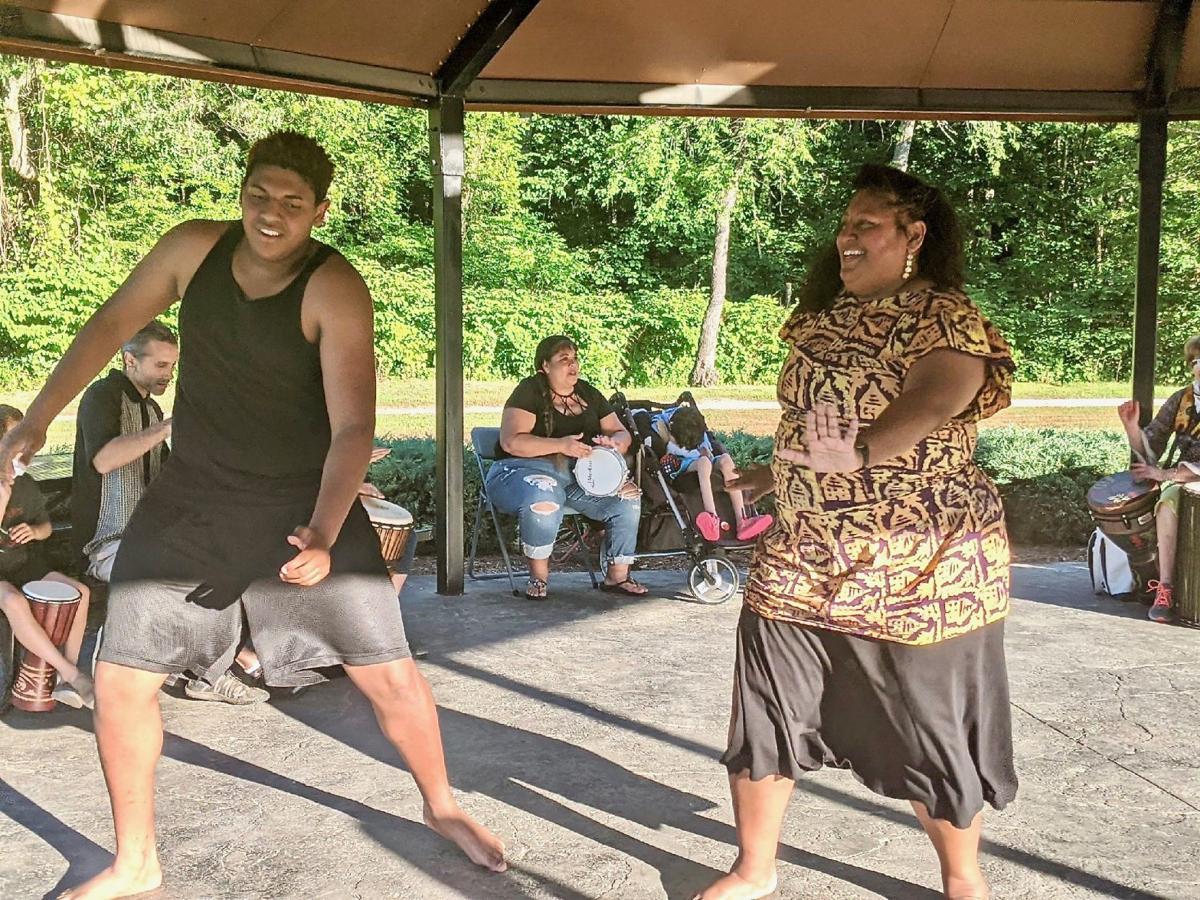 Local performer Donna Jordan, right, of the Dance Collective, along with her son, Noah, perform high-energy demos of salsa, tango, African traditional, contemporary and other dance styles to the music of SoMar Drummers at the Port of Leonardtown Park. 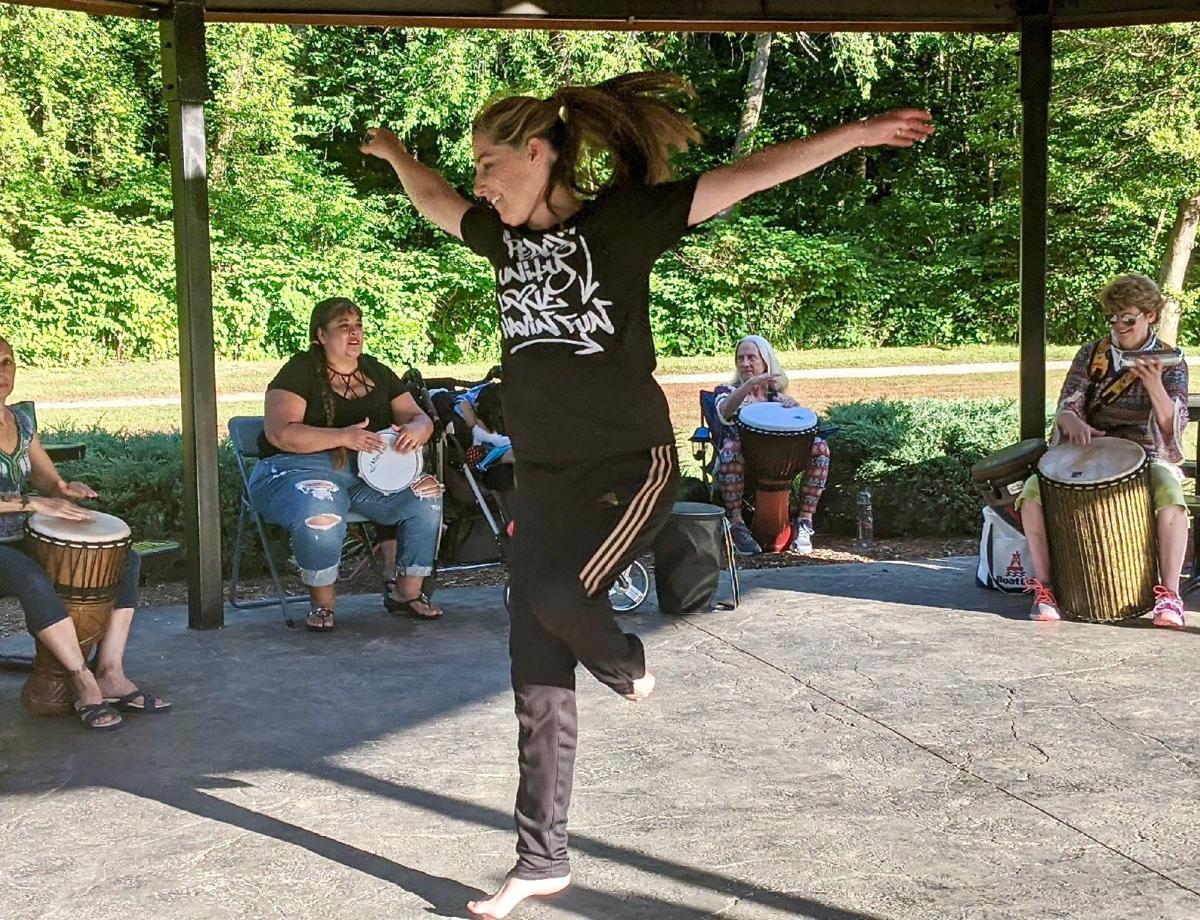 Caitlin Kirk dazzles with her spins, power moves, freezes and handstands during in Leonardtown. 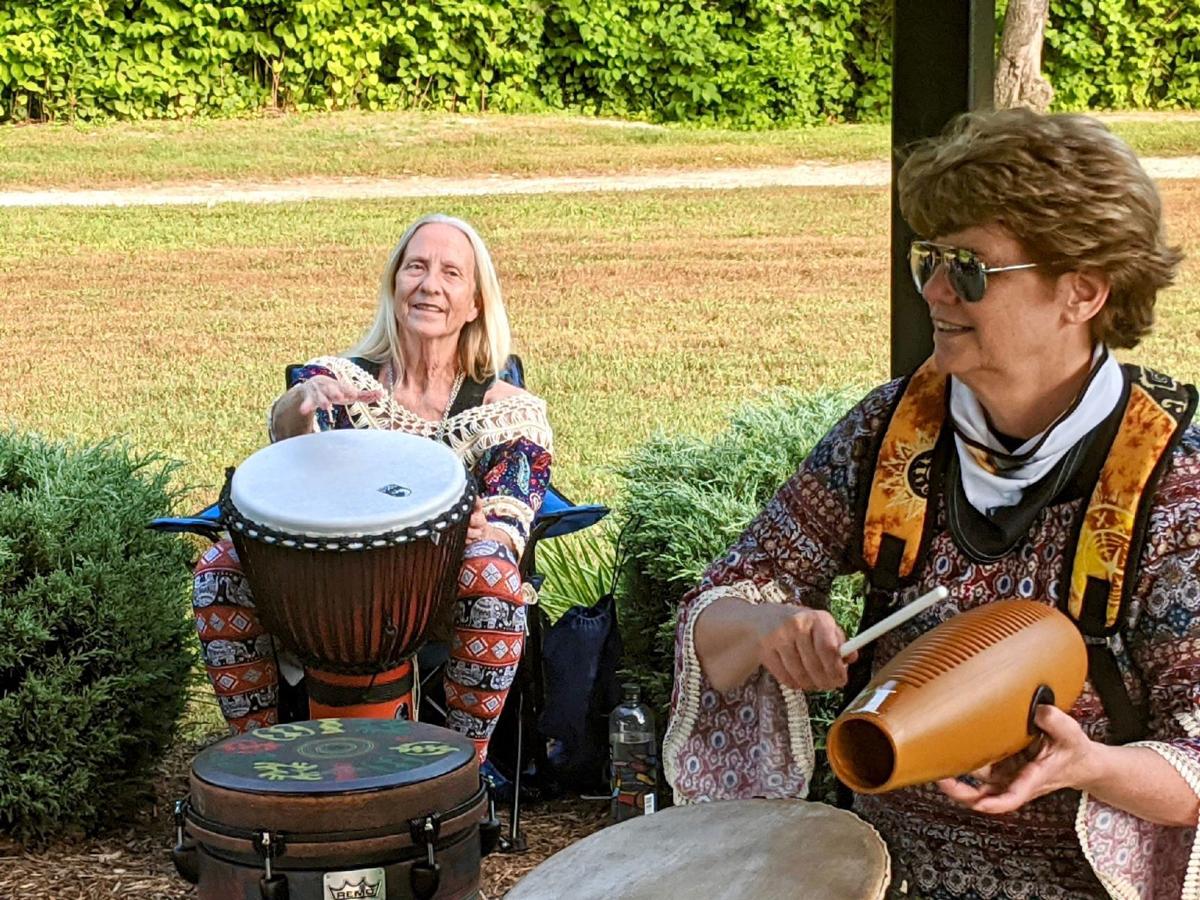 Local performer Donna Jordan, right, of the Dance Collective, along with her son, Noah, perform high-energy demos of salsa, tango, African traditional, contemporary and other dance styles to the music of SoMar Drummers at the Port of Leonardtown Park.

Caitlin Kirk dazzles with her spins, power moves, freezes and handstands during in Leonardtown.

It’s been a long time since people have been able to gather as a group, say hello to friends, to dance and to drum.

As Maryland has moved forward to Phase 2 and COVID-19 restrictions have been eased, the local arts scene has been able to slowly make its re-appearance for in-person activities. The St. Mary’s County Arts Council last week announced a taping session that had occurred on June 14 for the Leonardtown Virtual Artist Showcase, according to a release from the arts council.

Under the pavilion at the Port of Leonardtown Park were percussion pod clusters of family members and friends, strategically seated and spaced apart on a beautiful sunny day. After three months of canceled First Friday drum circles, it was hard to hold back the excitement of making music together, according to the release

Sheila Klotz, organizer of the SoMar Drummers, gave a quick overview of the instruments as well as a few highlights from her career as a professional military drummer. She had recently won a champion title for the “Hit Like a Girl 2020” global contest for female drummers.

Kirk was also featured — originally from a small town in Maine she has been intrigued by break dancers since the late 1980s when she traveled to New York and Boston, the street dance hotspots of that time. She dazzled with her spins, power moves, freezes and handstands.

After Donna Jordan gave a short overview of the historical perspectives behind the various dance forms, it was shoes off and feet on the floor. She and her son, a rising high school junior, mesmerized with their deft transitions from one dance style to the next. As the former owner of the House of Dance, Donna Jordan’s experience with her art form has been an almost life-long experience, as the same for her children.

Ringing through the air were the djembe bass tones, calling out in unison and echoing from the trees above to the water below. The higher pitched doumbek drums sailed above the musical tide and spun through the ebb and flow of the tambourines, shakers, guiros and other assorted pieces, according to the release. Like a reunion of old friends who had gone separate ways then crossing paths again, the mood was nothing other than joyful and uplifting as a mosaic of music and dance was created.

Catch the video, Episode 8 of Leonardtown A&E Online, at the website www.visitleonardtownmd.com.

To learn more about upcoming dance events visit Leonardtown Salsa on Facebook for details. Donna Jordan is also an adjunct professor at St. Mary’s College of Maryland and at the College of Southern Maryland where she offers various classes and workshops.

First Friday activities return to Leonardtown next week on July 3 from 5 to 8 p.m. as restaurant as well as select shops and galleries open. The audience participation drum circle will also be returning, with a few changes. Participants must bring their own drums, although there will be free egg shakers to give away for those without instruments. Social distancing will be in effect.

Announcements of future events will be made at www.stmarysartscouncil.com and on the Facebook pages of both hosts.