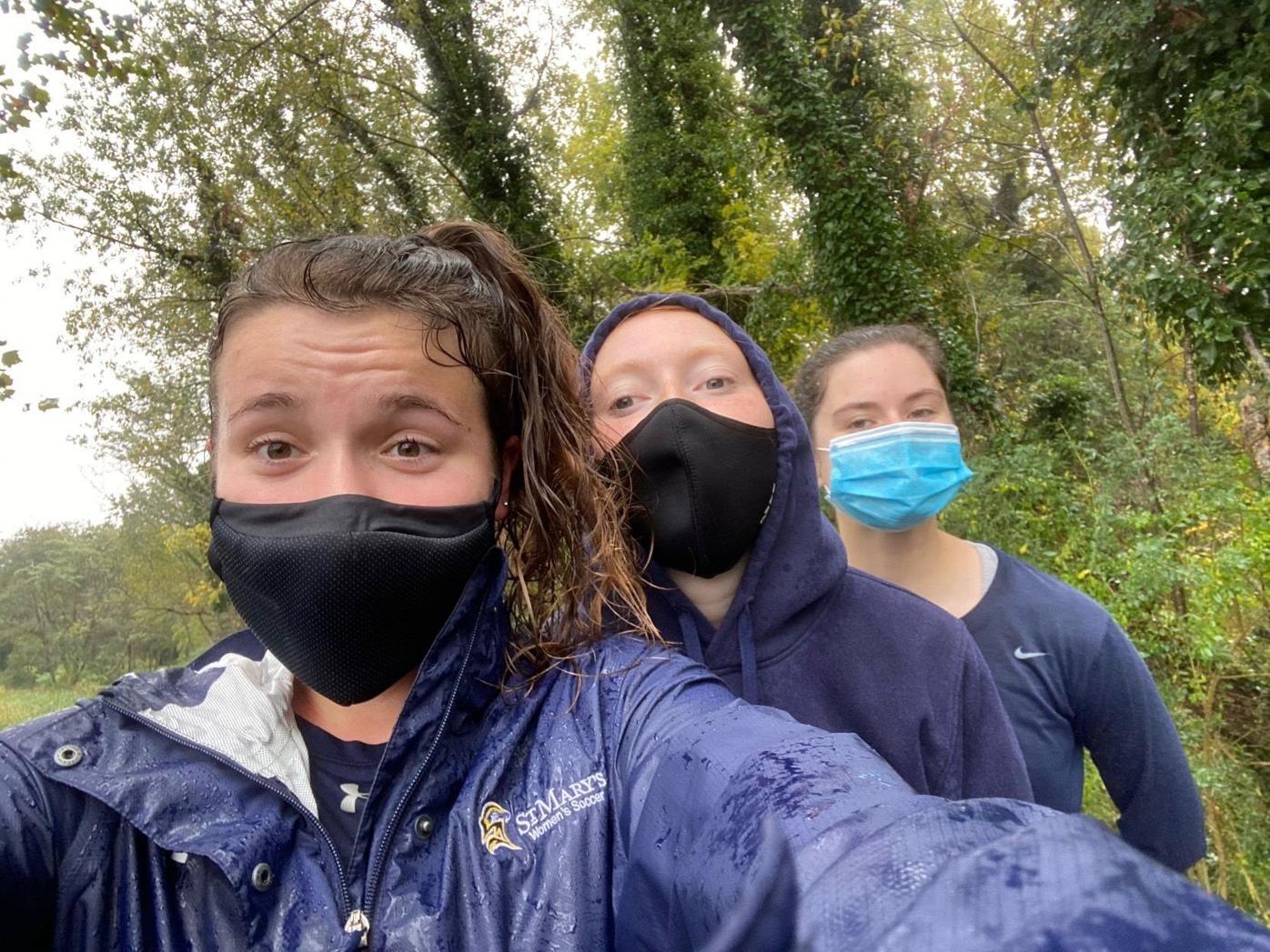 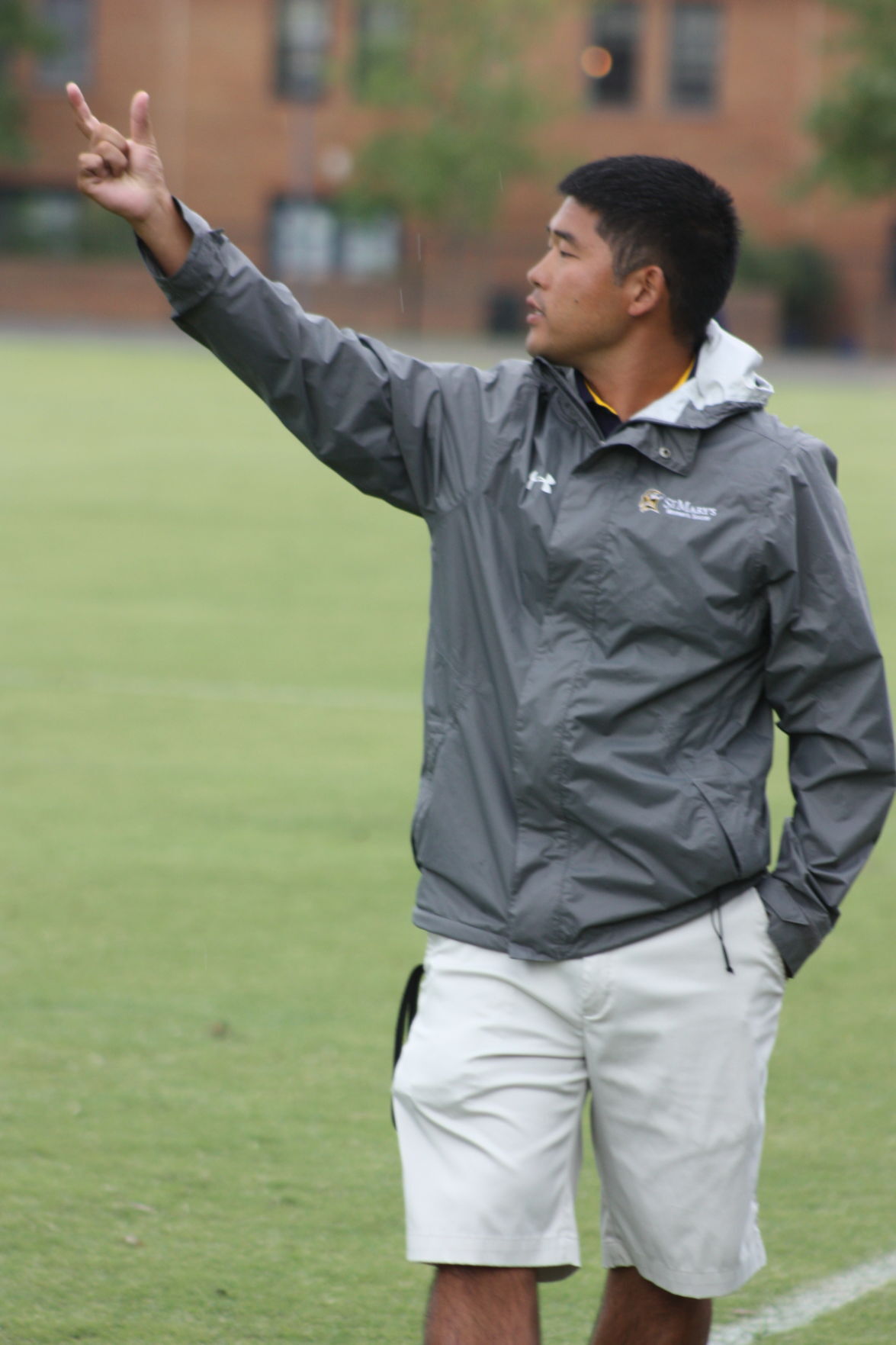 After they raised $1,773 for Vs. Cancer, St. Mary’s College of Maryland women’s soccer head coach Peter Krech said he was proud of his players for supporting such a good cause. 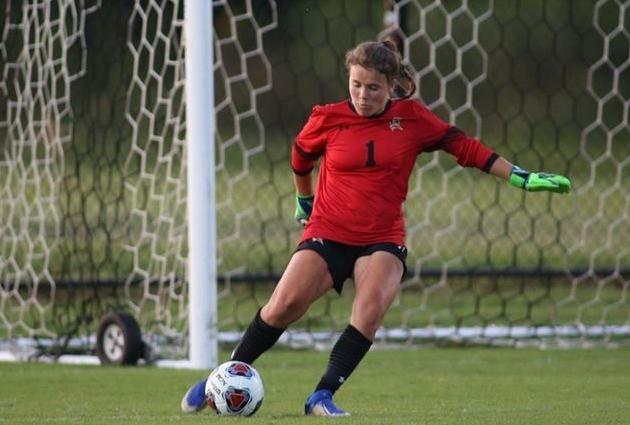 St. Mary’s College of Maryland sophomore goalie Audra Haines, shown here in a 2019 game, said that raising funds for Vs. Cancer “really brought us together.” 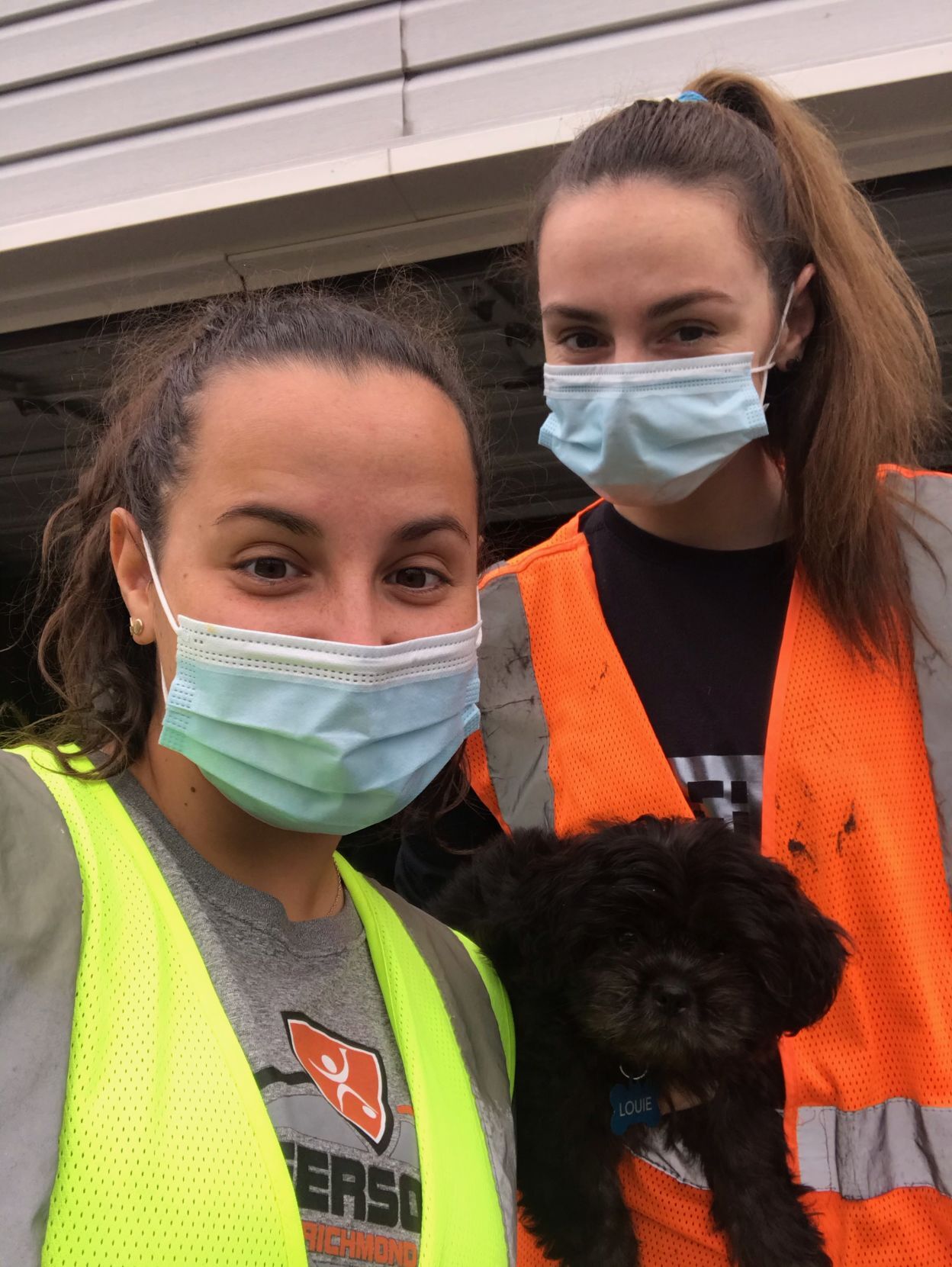 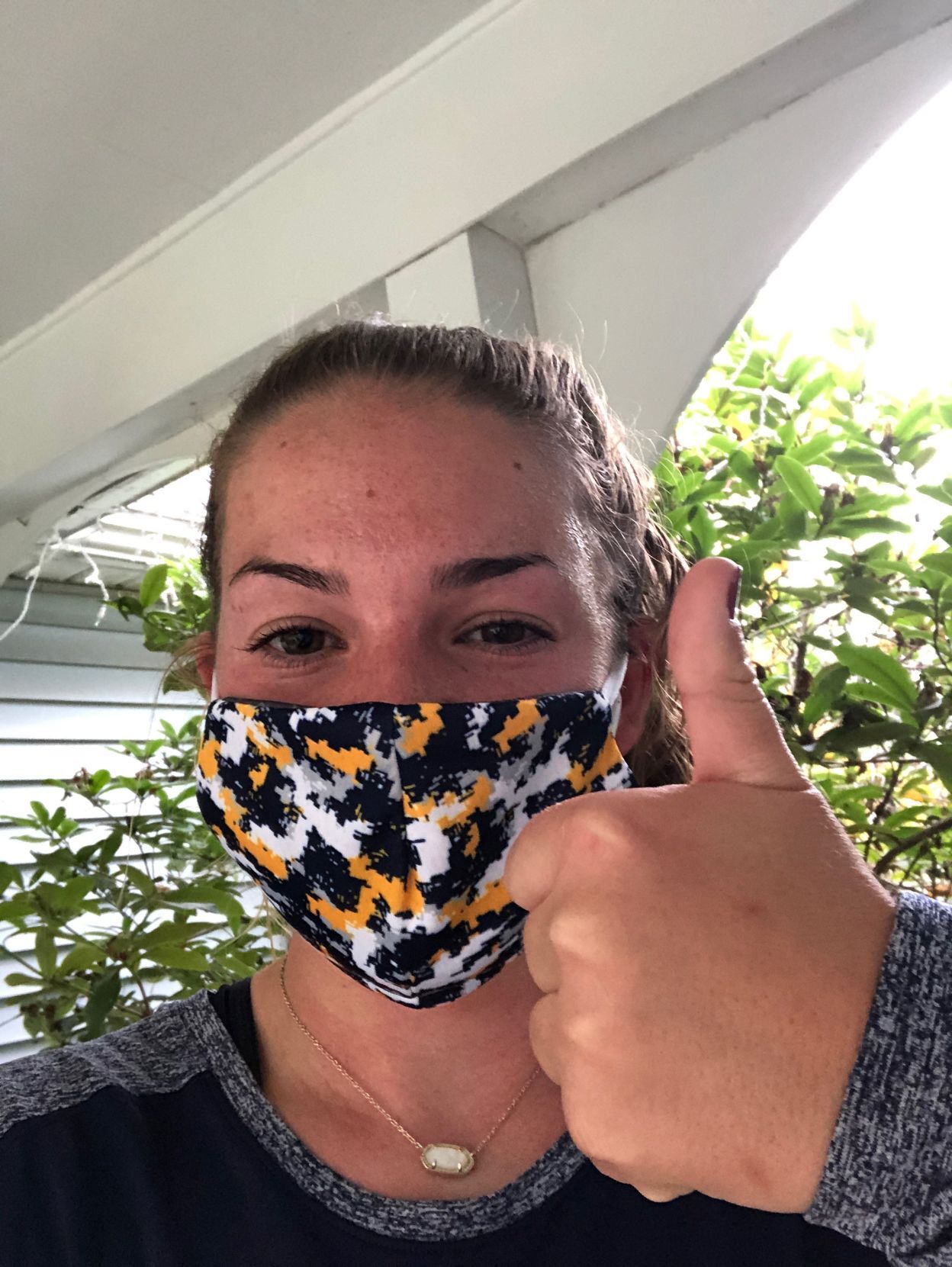 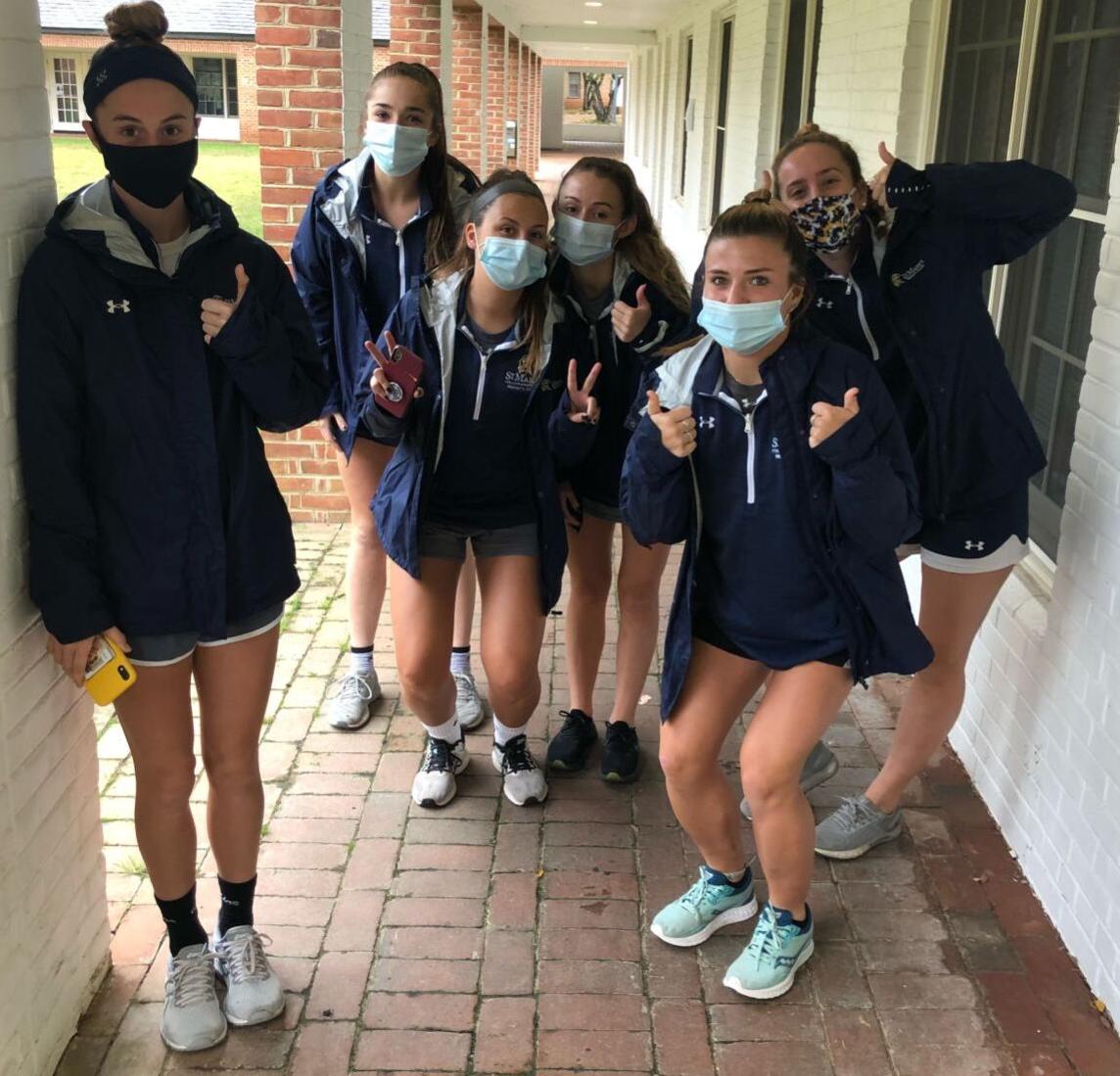 After they raised $1,773 for Vs. Cancer, St. Mary’s College of Maryland women’s soccer head coach Peter Krech said he was proud of his players for supporting such a good cause.

St. Mary’s College of Maryland sophomore goalie Audra Haines, shown here in a 2019 game, said that raising funds for Vs. Cancer “really brought us together.”

The St. Mary’s College of Southern Maryland women’s soccer team has battled many tough opponents over the years but, ironically, during a year they will not take to the pitch at all, they are helping to tackle one of the toughest foes ever. The Seahawks came together recently to take part in the Vs. Cancer fundraiser, the signature campaign for the Pediatric Brain Tumor Foundation.

“Almost all of us know someone who has suffered from various forms of cancer, and while it is never easy, watching children suffer is even more heartbreaking and emotional,” said St. Mary’s College of Maryland head women’s soccer coach Peter Krech, whose brother, Michael, had brain cancer when he was a teenager. “I am proud of my players for supporting such an important cause.”

“I’m ecstatic because it’s awesome to be part of something like this and it’s really cool that we were able to surpass our goal,” said senior captain Maddie Webb. “I think it’s really awesome that our team was able to come together like that.”

The team raised $1,773 thanks in large part to a 4-mile virtual run held Oct. 25. The number four brings awareness to the fact that only 4% of federal government cancer research funds are designated to pediatric cancer research.

“I just think that having a goal in terms of donations gave us something to work toward,” Krech. “Personally myself I’m very excited. I think obviously we would have loved to have had the season and focus on some other things, but all things considered I’m proud of the group for still being able to find ways to have a positive impact. Cancer is a horrible thing for anyone to deal with, more so for kids, so I think it’s an important cause and from my standpoint I was happy to be involved with it and I’m proud of the team for being involved with it and hopefully we’ll continue to be involved with Vs. Cancer moving forward.”

The team placed 10th overall among 18 colleges and universities that took part in the fundraising campaign, despite having just 12 members, the fourth fewest members.

“To be in the top-10 overall is something that I’m very proud of the team for,” Krech said. “I’m proud of them for a lot of things this fall and what they’re doing and the adversity and the perseverance they’re showing, but to raise $1,700 for pediatric cancer is just phenomenal. There are certainly bigger things than soccer and I think this would fall into this category, so I can’t say enough about the group overall.”

“I was very surprised I didn’t know how much people would donate because everyone’s financial situations are different,” said sophomore goalie Audra Haines, “so I’m really surprised that we exceeded our goal and kept raising money even after we reached our goal.”

“We applaud the efforts and generous spirit of St. Mary’s College women’s soccer,” Kimberly Roy-Canning, the director of the Pediatric Brain Tumor Foundation’s northeast region said in a release. “Vs. Cancer wasn’t just built by athletes for athletes. We were started by a pediatric brain cancer survivor, and we see every day how important family support and research are for children to thrive.”

Last season, the Seahawks raised proceeds for Vs. Cancer during its Oct. 26, 2019, game against Mary Washington.

Krech has been keeping his team — which finished the 2019 season with a record of 3-15-1 — busy with non-soccer activities this fall. He and his team have been focused on mental health, leadership and diversity, and inclusion with weekly meetings, guest speakers, college alumni and other resources. Recently, peer health educators did a workshop with the team — many of whom have not played a competitive match in almost a year — to help players deal with stress.

“We tried to have some [soccer] conversations earlier on in the year, but I learned it’s really hard to talk about shape and formations and tactics without being able to go onto a field and actually putting it into live play,” the coach said. “I think not having a season has allowed us to focus on other things in general more.”

“I’m a senior now so I’m feeling like I don’t really get my senior season, but just being able to practice with the girls and be on campus in general has been a giant positive for me,” said Webb, who made the team as a walk-on. “I think just being a part of this team and trying to make a difference has definitely been more important to me than playing.”

The team has also been having discussions on team culture and staying positive, which Krech said “will hopefully put us into a position for next time we’re able to have a normal season that we’ll have our culture firmly embedded within the program.”

Vs. Cancer was built by athletes for athletes, giving them the platform to raise money for childhood cancer. Founder Chase Jones experienced childhood cancer in 2016 when he was diagnosed with a Stage IV brain tumor as a freshman baseball player at the University of North Carolina. As a result, his team rallied around him during treatment and began raising funds to support their local hospital.

For more information about the Vs. Cancer Foundation, call 800-253-6530 or go to the SMCM website at team.curethekids.org/stmaryscollegeofmarylandwomenssoccer2019 or the site www.curethekids.org/mission.