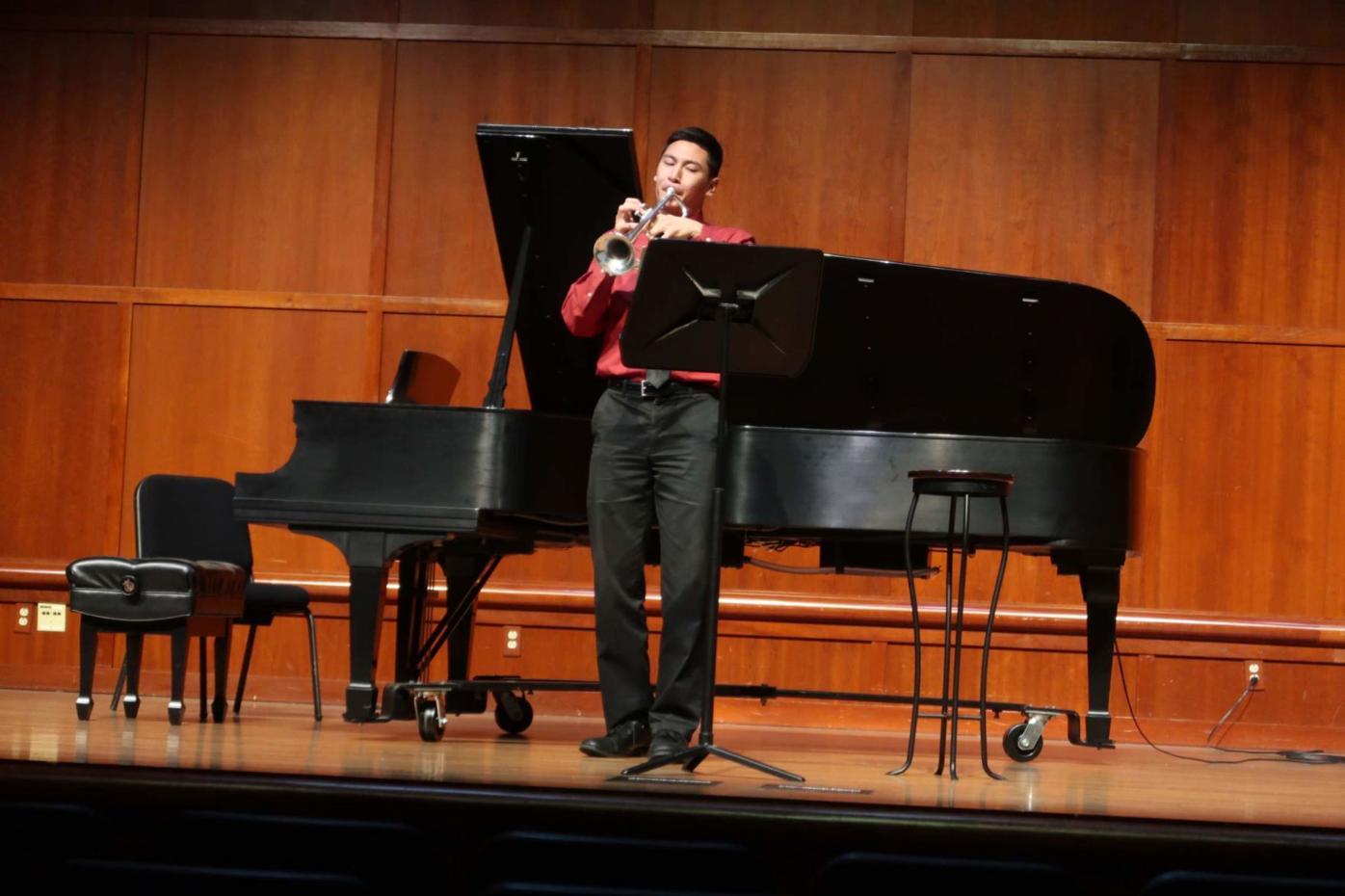 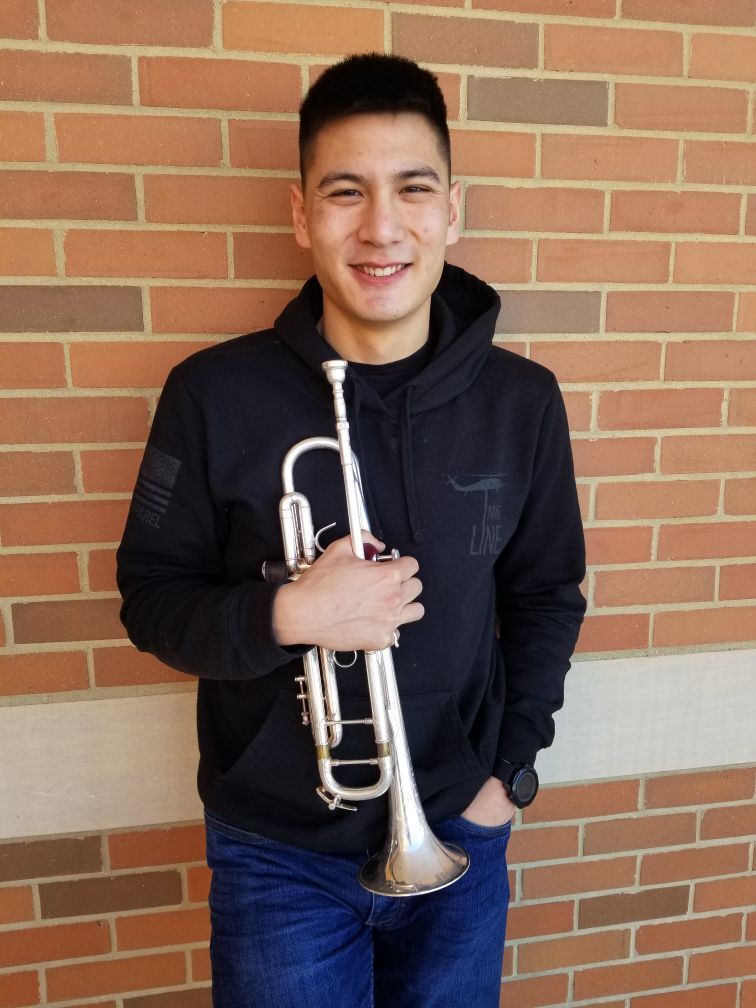 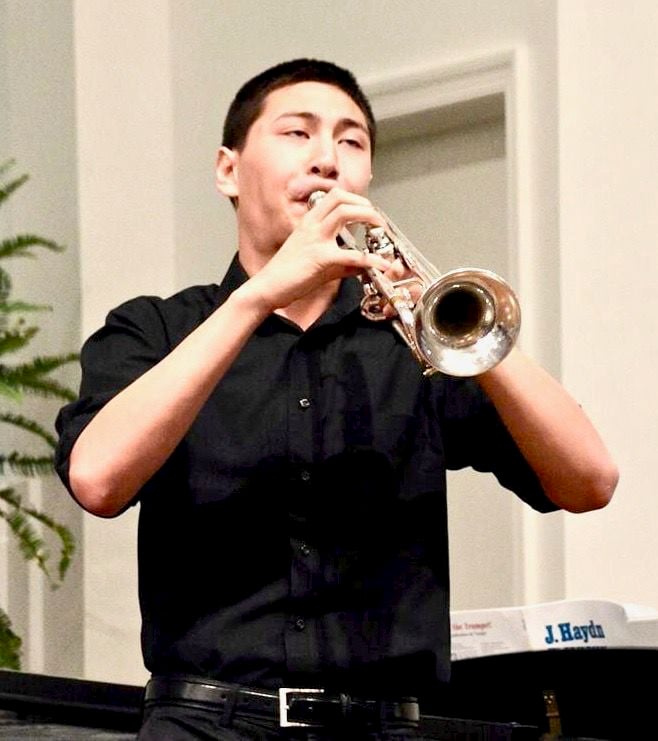 Senior Micah Yeh, who will perform at Cedarville University’s Dixon Ministry Center Recital Hall on Saturday, said he overcomes his stage fright by praying before each performance.

Senior Micah Yeh, who will perform at Cedarville University’s Dixon Ministry Center Recital Hall on Saturday, said he overcomes his stage fright by praying before each performance.

Micah Yeh will be graduating college on a high note, literally, when performs at 3 p.m. on Saturday, Feb. 20, at Cedarville University’s Dixon Ministry Center Recital Hall.

The St. Mary’s County native, who is a music major with a focus in trumpet performance at the college in Ohio, will play a variety of pieces ranging from Gershwin to the Arutiunian trumpet concerto.

“I am thrilled and also nervous, I’ll admit, but I am beyond excited,” said Yeh, who will perform his socially distanced concert in front of about 70 people. “This is an opportunity for me to cap off a decade of trumpet practice and performance and a climax of what I’ve been working toward.”

Yeh, who will graduate at the end of April, will also perform a duet with Cedarville University trumpet professor Charlie Pagnard.

“It will be a rewarding time I think for both me and himself,” Pagnard said. “It’s a nice piece, he’s worked on it really well and I think it’s going to be great.

Yeh grew up in a musical family and three of his brothers, Ben, Jonah and Simon, were part of the Yeh Jazz Trio that played in and around Southern Maryland from 2010 to 2013.

“Jonah was a piano player and he was getting all the glory and I’m thinking, ‘If I play the same instrument as my older brother I won’t be able to get my name known,’” said Yeh, who started out as a piano player. “So I decided to push the trumpet and kind of carve out my own path.”

Yeh said the trumpet “is a very powerful and regal instrument. Whether you’re playing in an orchestra or a jazz band it’s really a special moment, and I just love the versatility of it.”

Yeh, who was homeschooled, received an impromptu trumpet lesson from Pagnard while visiting his brother at the Ohio-based university as an 11-year-old.

“The embouchure [the position of the lips on the mouthpiece] seemed to be in a negative position so I had to work with him a little bit, but his initial sound indicated to me that he was going to be fine,” Pagnard said. “The ‘whoa’ part for me was that he immediately picked up the principals that we talked about, so by the time we were done I would say he was months ahead of where he should be. ... I had a feeling that, ‘Hey, this kid is going to be good.’”

“Oh, I was terrified,” said Yeh, who was gifted a signed copy of a trumpet book by the professor. “And now I’ve cone to the point where I’m going to do a duet with him for my senior recital really just caps off this stage in my life and is super cool for me.”

Yeh said his musical success is due in large part to his family and music teachers, Kay Darby and Robert Birch.

Upon graduating from college, the ROTC Army cadet will be commissioned as an active-duty 2nd Lieutenant.

“I honestly believe that anything that’s worth doing in this life is going to be hard,” he said. “If it’s easy, you’re either not pushing yourself hard enough, or it’s probably not worth doing.”