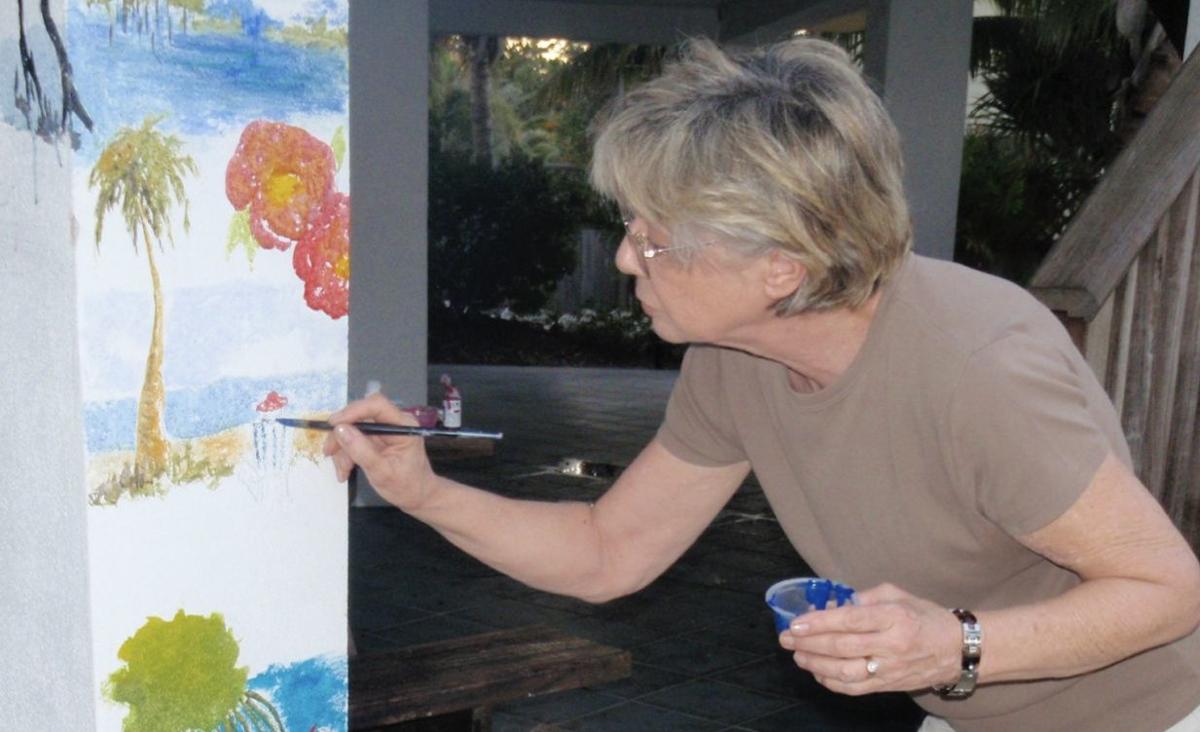 Above, Solomons artist Mary Blumberg, shown painting with a volunteer, died in December at the age of 83. “The Crazy Owl,” below, is one of Mary Blumberg paintings. 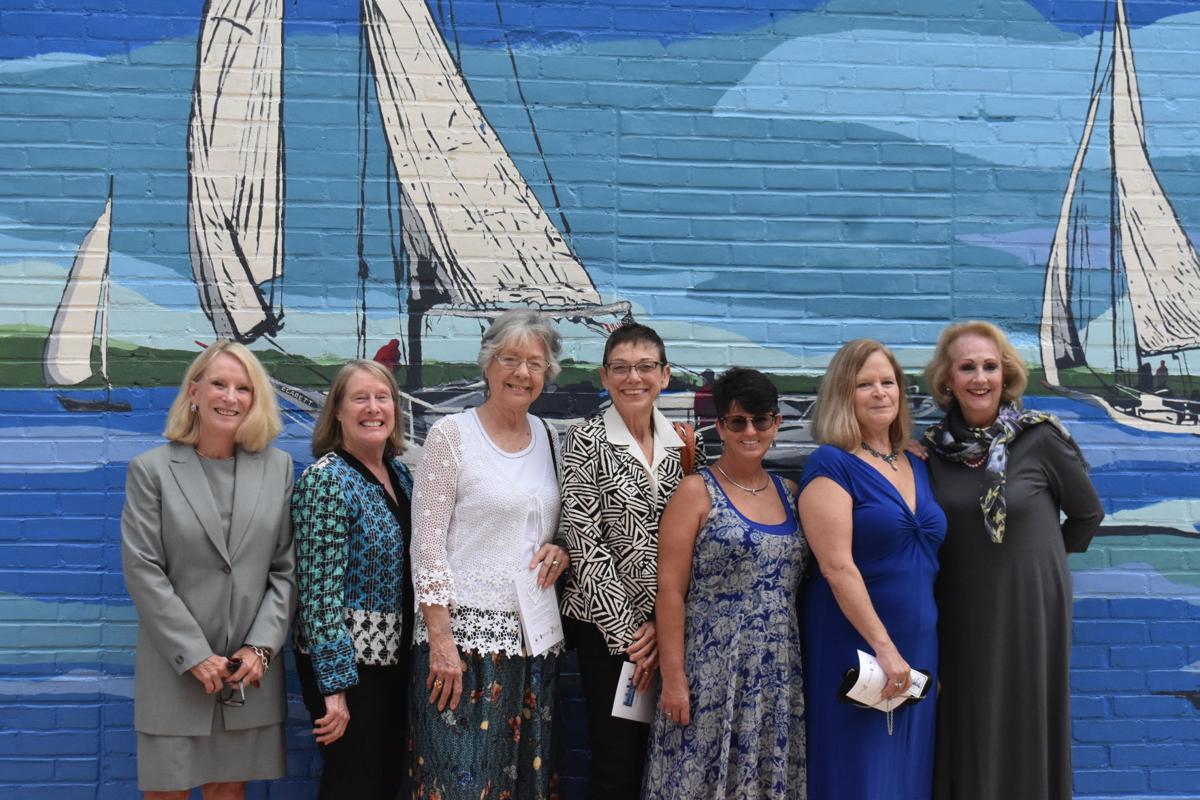 Above left, “The Crazy Owl” by Mary Blumberg. Right, Mary Blumberg hams it up while painting a skipjack mural at the Calvert County courthouse in November 2018. 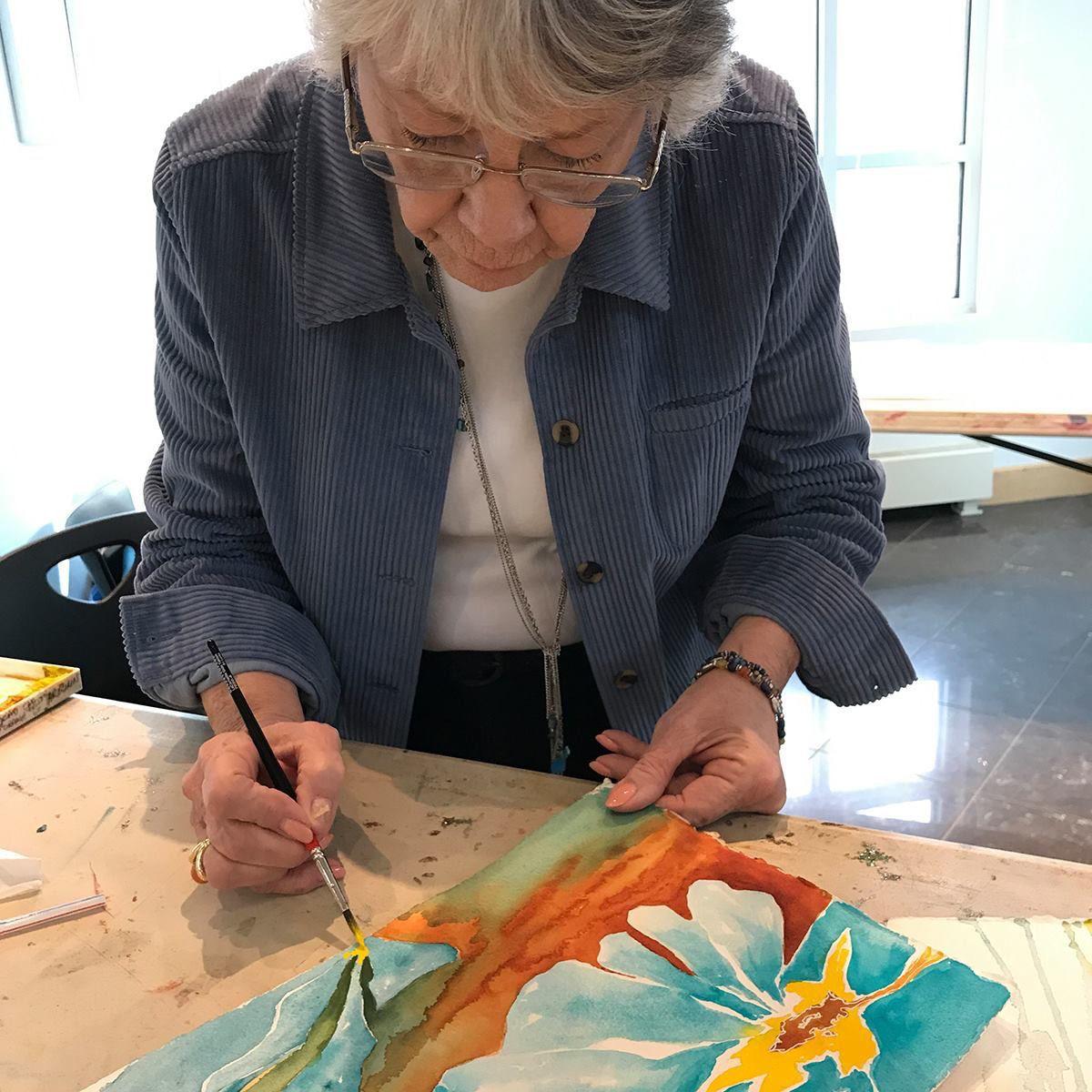 Regarding artist Mary Blumberg, above, artist Barbara Boward said she’s “spent many happy hours returning again and again to her incredible artworks, and drawing peace and inspiration from them.”

Above, Solomons artist Mary Blumberg, shown painting with a volunteer, died in December at the age of 83. “The Crazy Owl,” below, is one of Mary Blumberg paintings.

Above left, “The Crazy Owl” by Mary Blumberg. Right, Mary Blumberg hams it up while painting a skipjack mural at the Calvert County courthouse in November 2018.

Regarding artist Mary Blumberg, above, artist Barbara Boward said she’s “spent many happy hours returning again and again to her incredible artworks, and drawing peace and inspiration from them.”

Marianna Nystrom first met Mary Blumberg when she took one of her art classes at Annmarie Sculpture Garden & Arts Center in Calvert County. Nystrom, who was a beginner, painted some azaleas from her garden as a homework assignment.

“The next day Mary looked at my assignment and said, ‘That would make beautiful wallpaper,’” the California resident said with a laugh.

The quick-witted Blumberg, who was also an accomplished artist, died Dec. 9 at the age of 83 after a short battle with ALS.

“My mom was my best friend,” said daughter Elaine Asson of Leonardtown. “She was caring, she was giving, she was empathetic, she was the best listener I’ve ever known.”

“She was a vibrant light in her personal and professional community,” said her daughter-in-law, Anita Blumberg, who lives in Fort Lauderdale, Fla.

Mary’s son — and Anita Blumberg’s husband — Kal, who is an orthopedic spine surgeon, said his mother was an eternal optimist.

“She was a very positive person who saw the positive side of everything,” Kal said in a telephone interview. “She saw something good in everybody and every thing, and she lived that way.”

Mary Blumberg leaves behind three children — her son, Joe, died of cancer in 2015 — as well as six grandchildren and soon to be three great-grandchildren.

Every summer, Mary would host her grandchildren during Camp Grandma.

“They would paint, they would take bike rides and other activities,” Asson said. “It was just so much fun” for the kids.

“We would drop them off and she would just start canceling stuff,” Kal said.

Artist Pam Callen of Lusby wrote in a memorial that Mary’s face “took on an ethereal quality when she mentioned that the grandchildren were coming over to paint with her.”

The eldest of six children, Mary Blumberg married Dr. Edward Blumberg, a general practitioner and orthopedic surgeon, in 1957. Mary had careers as a nurse, an interior designer and an artist, and was even an amateur seamstress.

The family lived in Florida, Ohio, Virginia and then Florida again when Edward retired to pursue the couple’s love of boating. They would travel around to different ports in a trawler and in 1997 they bought a summer home in Solomons, and moved there permanently in 2009.

And Mary Blumberg was always ready with a laugh. When they were young, Joe and Kal rigged up a pulley system so that when she walked past it exploded, showering her with hundreds of pieces of confetti.

“She thought it was hilarious,” Asson said.

Recently, Mary drove the family to dinner in Solomons, and upon exiting the restaurant, realized the car had been running the whole time.

“We teased her a lot about that,” Kal said.

In March 2019, 82-year-old Mary hopped into her van and drove the 1,036 miles to Fort Lauderdale to visit with Anita and Kal and take some art classes.

“We would go to Florida together and she would drive the whole time,” said artist Marianne Chenevey of California, who knew Mary for nine years. “She was a really good driver, but she was a fast driver. Pedal to the metal, no matter what.”

“I locked my keys in my running car outside [CalvART] Gallery and I asked Mary if she would run me home to get my second pair of keys,” said Carol Eberly, who is the executive director of the Arts Council of Calvert County. “Mary never blinked an eye. I will always remember her concern and kindness.”

Artist Denise Breitburg of Port Republic put together a 12-page memorial for Mary, her friend of almost a decade.

“I’d never heard of anyone talking about tablescapes in the way that you talk about landscapes, but she really loved to decorate for our receptions,” said Breitburg, who is also a member of CalvART Gallery. “She would just come up with these tables that were works of art in themselves. She used to go all out on them.”

“I’ll always think of her arranging and rearranging the flowers and food,” said artist Mickey Kunkle of Solomons. “It had to be just right to suit her vision.”

The couple was married for 59 years until Edward died of cancer in 2015.

Mary was well-known in artistic circles and was a member of the CalvART Gallery, Annmarie Sculpture Garden & Arts Center and The Color and Light Society.

“I sold a little watercolor I did in one of her classes,” said Welcome-based artist Jo Anne Gilooly. “The check for it went to Mary because whoever wrote up the sale thought it was Mary’s artwork. I was so proud to have one of my watercolors mistaken for Mary’s that I didn’t even care about getting the check.”

When Breitburg sold one of her pieces to Mary, she said she was “overwhelmed and flattered that [Mary] would want it in her living room.”

Fellow artist Abbey Griffin of Washington added that Mary’s passing has “left a hole in the world that can not be filled.”

Mary Blumberg gave her paintings offbeat names such as “The Zappy Zinnia,” “The Magnolia Mama,” “The Mango Fandango,” “The Crazy Owl” and the “Raleigh Peach Rally.”

“Mary was my morning coffee buddy, my Artsfest power pal, my go-to decorator, my fellow artist, my sounding board, my good friend,” Suzanne Shelden of Prince Frederick said.

Artist Barbara Boward of Lusby added she’s “spent many happy hours returning again and again to [Blumberg’s] incredible artworks, and drawing peace and inspiration from them.”

“She just had an amazing way of using color that would catch your eye,” Breitburg said. “You couldn’t take your eyes off them.”

In an email she sent Blumberg on Nov. 12, Chenevey wrote, “I was thinking of something you told me once, that when you were a young girl starting out in art that you wanted to change the world. I just want you to know that you have succeeded in your quest, one art student, one friend, one individual life at a time. I wish I could tell you in words how important you are in my life and how much you mean to me.”