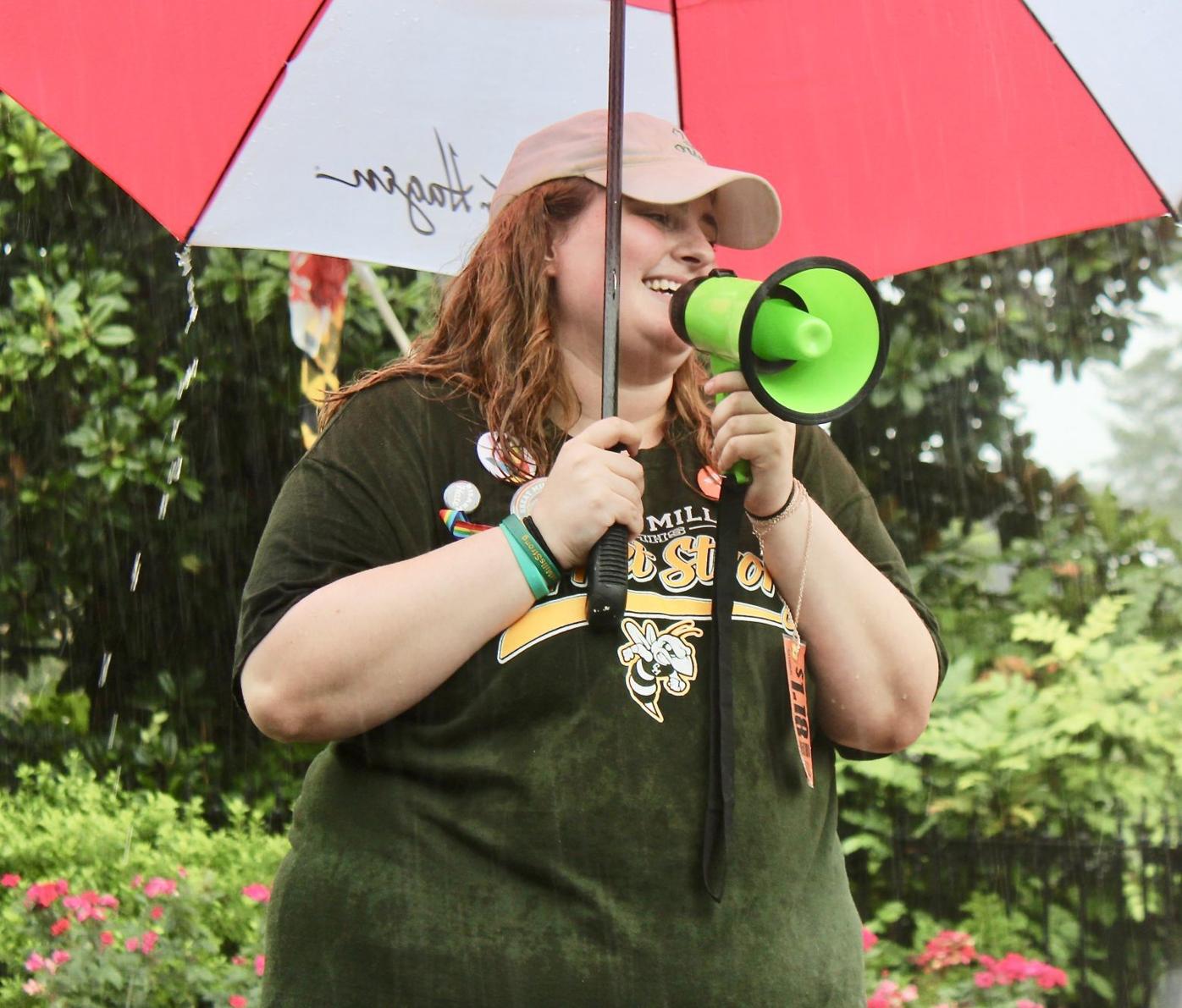 Great Mills High School senior Jaxon O’Mara speaks to a crowd in the rain last July at the Students for a Safer Maryland rally at Lawyers Mall in Annapolis.

The board of St. Mary’s County commissioners are, in front from left, Todd Morgan (R), President Randy Guy (R), and in back from left, Eric Colvin (R), John O’Connor (R) and Mike Hewitt (R).

Great Mills High School senior Jaxon O’Mara speaks to a crowd in the rain last July at the Students for a Safer Maryland rally at Lawyers Mall in Annapolis.

The board of St. Mary’s County commissioners are, in front from left, Todd Morgan (R), President Randy Guy (R), and in back from left, Eric Colvin (R), John O’Connor (R) and Mike Hewitt (R).

A mobile scanning kit that uses radio waves to detect weapons and is capable of facial recognition through artificial intelligence will soon be tested by St. Mary’s public schools’ safety and security office.

“The unique piece about this technology is that it gives us capability to scan groups of people with a handheld device,” Mike Wyant, safety and security director for county schools, told The Enterprise.

The scanning device, called SWORD, looks like a case that can be placed on an Apple’s iPhone 8 Plus, iPad and Google’s Pixel 2XL. Security personnel can aim the device at a group up to 40 feet away and show if any of them are carrying firearms, knives or explosives on them or in their bookbags, which Wyant said is more effective than a metal detector.

Charles Eible, the school system’s safety coordinator, said that the kit comes with a tripod, which they could possible use to stand the device at sporting events, for example.

“The challenge is monitoring large groups … this technology, potentially, is gonna help us accomplish that,” Wyant said during a St. Mary’s County commissioners meeting last Tuesday.

The scanning kit, developed by Royal Holdings Corp., also has a facial-recognition feature. School officials can upload the photo of a person of interest, whether a student, community member or someone on the St. Mary’s County Sheriff’s Office watchlist, then scan the face of possible suspects to see if it matches. If there is a match, a notification is sent to school security and a school official will verify the person’s identity.

Wyant said the device is not connected to the school system’s database, which contains students’ personal information, including school photos.

Jaxon O’Mara, a senior at Great Mills High School and anti-gun violence activist, said the new devices are “definitely worth exploring” and could be a better option than metal detectors.

“We obviously need to be taking larger steps,” the senior said after referencing Tuesday’s shooting at University of North Carolina Charlotte that left two dead and four injured.

O’Mara said the device sounds “futuristic,” but she still needs to learn more about its efficiency. She said she wonders if the scanning devices can find smoking accessories like Juuls. The senior class vice president said she’s happy with the work the school system has done so far, but added that the work to end gun violence also needs to happen at home.

Still in its early stages, testing the mobile scanning kit is expected at the end or after this school year, according to Wyant.

The company launched its beta-testing phase for the technology in February, but has been met with some skepticism as to how effective the new technology will be, as well as what issues it raises about privacy.

The device cases have been running from $950 to $1,250 each, with a $30 monthly subscription to Royal Holdings.

“My first inclination, at some point, we need to take a step back and evaluate what we’re using and how we’re using it,” Commissioner John O’Connor (R) said Tuesday.

“St. Mary’s is far ahead [as far] as school safety is concerned,” O’Connor said. “I appreciate wanting to stay there, but why are we beta-testing technology ... on our students? We want [students] to be safe, but we need to balance their privacy along with that,” he said.

Little discussion ensued on the software at last week’s commissioners’ meeting, when county lawmakers approved a $49,505 state grant award. Commissioner Todd Morgan (R) inquired about 2D-mapping software also purchased with the grant, and whether it will be capturing students walking around the building, as well as who will be tasked with mapping the schools.

Eible describes the mobile 2D-mapping devices as “mini surveying equipment” meant for first responders heading to a critical incident. The software allows the phone to get the dimensions and images of a building so the user will have the layout in the palm of their hand.

Eible, who said he would be undertaking the 2D mapping, said that operation would take place during the summer, and ideally will be updated every year.

“I want you to continue pursuing every electronic means we have in this country to make our schools safe,” Commissioner President Randy Guy (R) said at the meeting last week.

Commissioner Eric Colvin (R), who told school safety officials at the meeting there was “no question” about the board’s supporting the funding, said in an interview Wednesday he’s “looking forward to learning about it and seeing a demonstration.”

Morgan said in an interview the commissioners “wanna make sure, with school safety supported as it is, we’re providing the right tools that are gonna be effective to prevent any more casualties” in county schools.

He added that he’s “gonna be doing a little more homework” on the SWORD technology.

The commissioners earlier this year voted down a request by the school board for $1.3 million to be put toward more safety and security personnel.

With the state grant money, the school system plans to buy five scanning kits and three mapping devices, which will likely be tested at either one or two high schools, if not all three, Wyant said. They have not yet purchased the devices but expects them in late May or early June, he added.

He also said that Charles County is looking to make use of the new devices.

Jason Stoddard, director of safety and security for the Charles public schools, said in an interview that if the technology is effective in St. Mary’s, “it will most definitely be something we explore.”

Stoddard added, “Thus far, I have not found conclusive research on the effectiveness of 3D photo technology in identifying concealed weapons, however, with the speed of technological advances research is always being updated.”

St. Mary’s will “probably be the first county that is using this software program,” Emily Allen Lucht, communications specialist with the Maryland Center for School Safety, which awarded the school safety evaluation grant, said, adding that the SWORD technology had not been on their radar as far as other requests for school safety grant funding.

Although “privacy is definitely a concern for all students and all families,” Lucht said “at the end of the day, we’re here to make sure the kids are safe. Sometimes that means using new technology and embracing the future and the future of school safety.”

In the past, “You never heard about metal detectors. You never heard of a child bringing a gun to school … That’s unfortunately the world we live in now,” Lucht said.