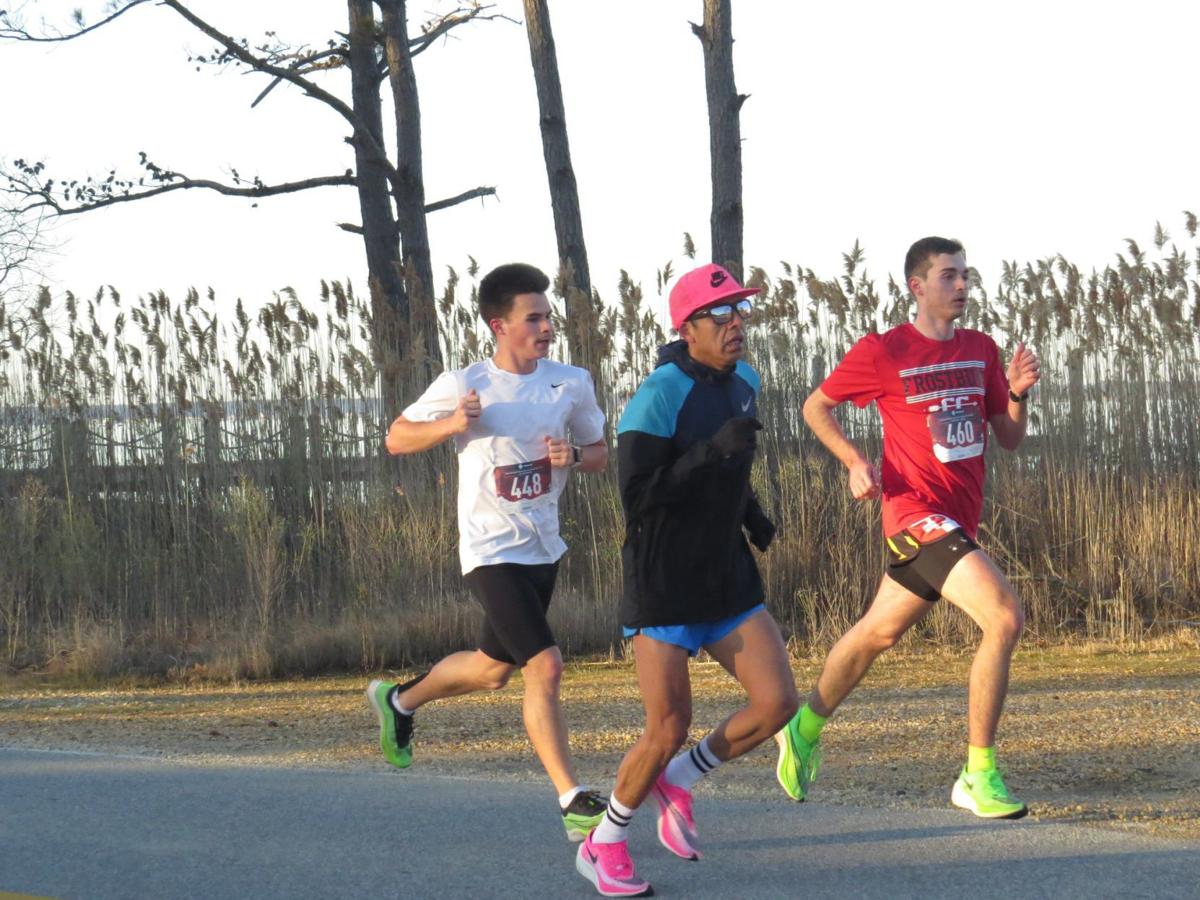 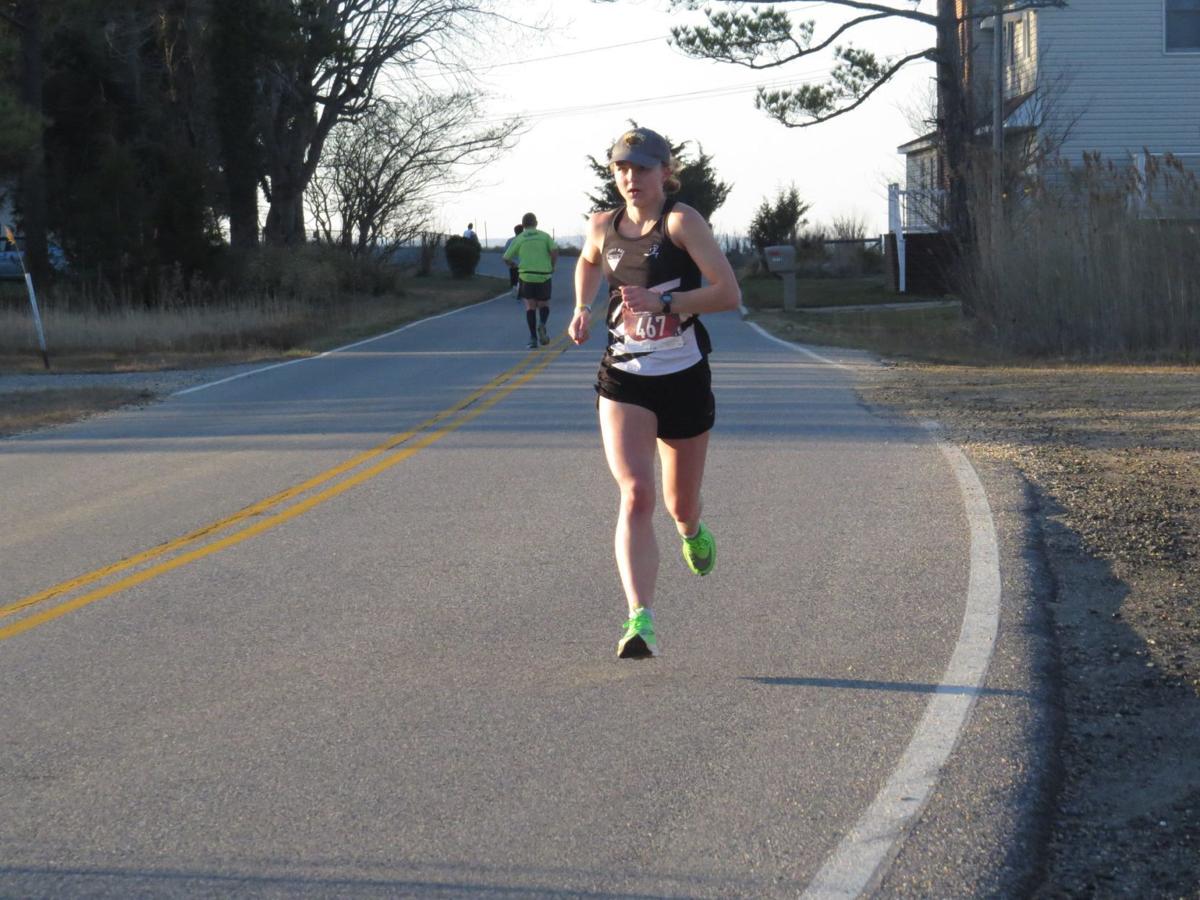 Anna Staats runs between miles 6 and 7 on St. George Island during the Lower Potomac River Half-Marathon on March 8. Staats, a Great Mills High School graduate, breezed through the flat 13.1-mile course in 1:30:01 to win the women’s gold medal. 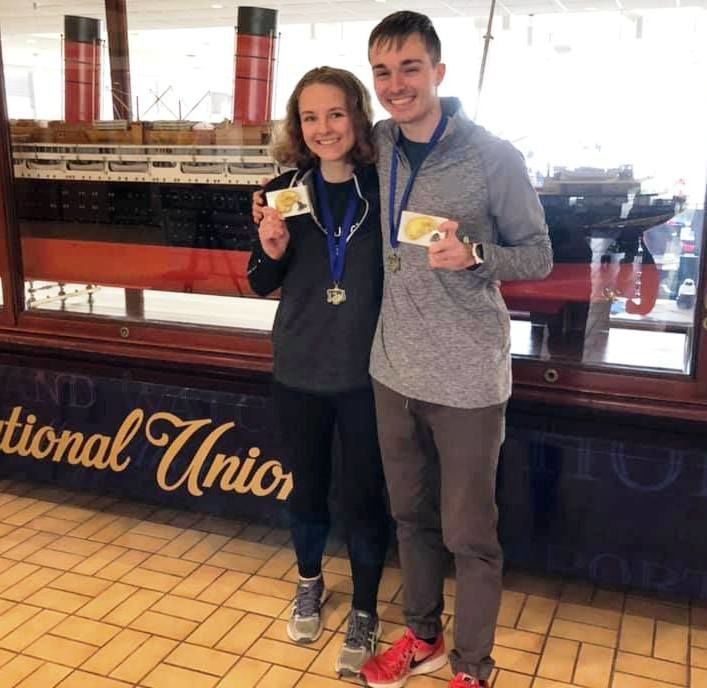 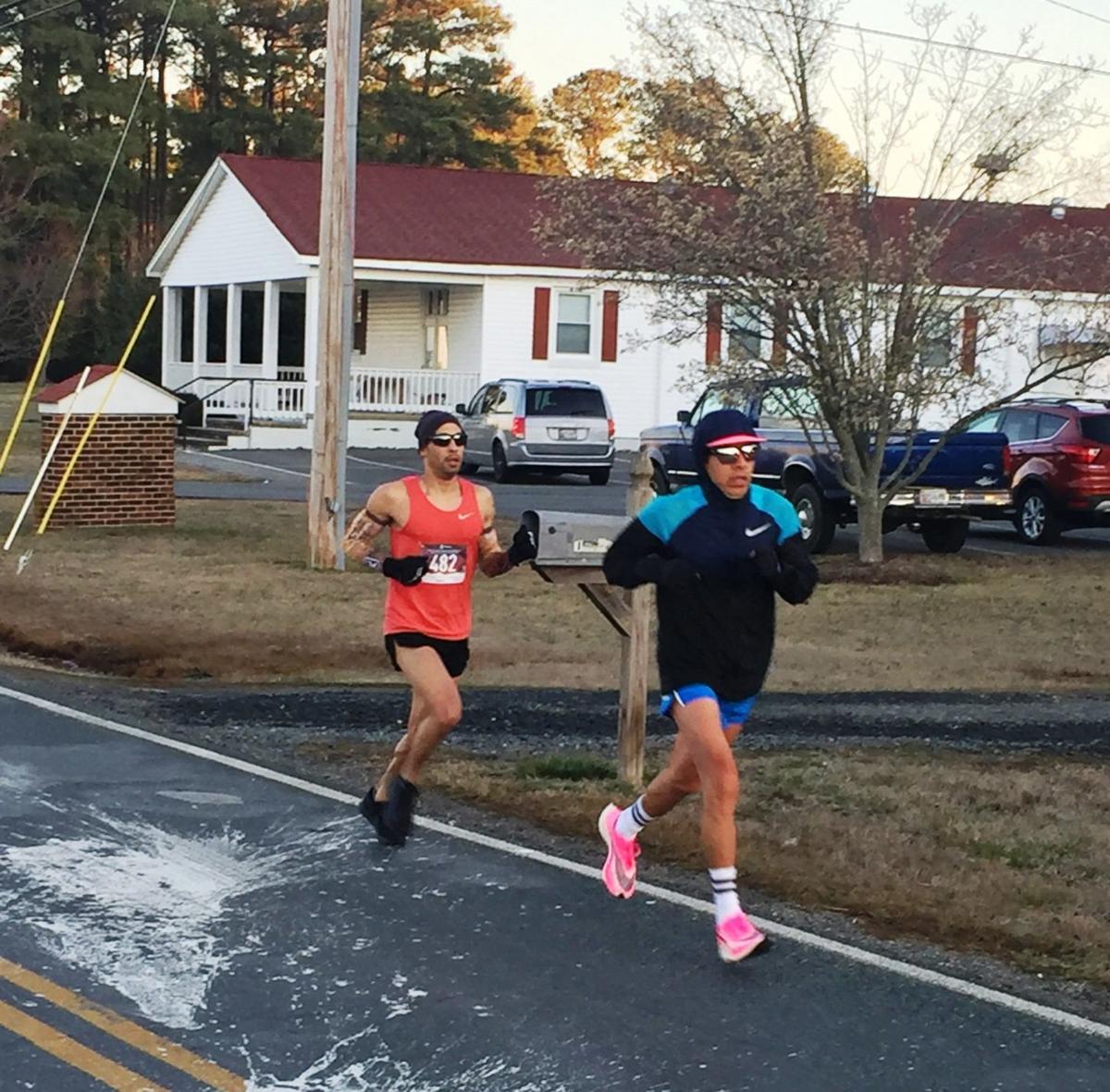 Diego Vanegas, front, and Vladimir Martinez-Jimenez lead the race at Mile 2.5 on St. George Island during the Lower Potomac River Half-Marathon on March 8.

Anna Staats runs between miles 6 and 7 on St. George Island during the Lower Potomac River Half-Marathon on March 8. Staats, a Great Mills High School graduate, breezed through the flat 13.1-mile course in 1:30:01 to win the women’s gold medal.

Diego Vanegas, front, and Vladimir Martinez-Jimenez lead the race at Mile 2.5 on St. George Island during the Lower Potomac River Half-Marathon on March 8.

Although there was strong competition from Northern Virginia and the Washington, D.C. Metro area, local athletes reigned.

Racing conditions were optimal as 83 runners gathered at the starting line inside the campus of the Harry Lundeberg School of Seamanship in Piney Point for the March 8 race. Skies were clear, the air was calm and the temperature was steadily rising above a pre-dawn 30-degree chill.

At the starting gun, veteran runners Diego Vanegas, 45, of Washington D.C., and Vladimir Martinez-Jimenez, 35, of Woodbridge, Virginia, immediately took the lead as the pack headed south to St. George Island. Close behind them were Logan Musumeci, 16, of Lusby, and Robbie Romano, 22, a 2015 graduate of Great Mills High School.

Although Romano had competed in track and cross country in high school and college and had run the Marine Corps Marathon last October, and Musumeci, who runs for Patuxent High School, had won the Lower Potomac River Ten-Mile Run that same month, both runners were contesting the half-marathon distance (13.1 miles) for the first time.

After the lead pack of four rounded the 5.5-mile mark on St. George Island, Romano pushed ahead of Martinez-Jimenez and Musumeci and set his sights on Vanegas, the leader.

Shortly after Romano made his move to catch Vanegas, Musumeci surged to the lead as Martinez-Jimenez dropped back. The three ran in a tight pack as they approached the eight-mile mark at the foot of the bridge.

“Around Mile 8 is when Logan really started to pull away from Diego,” Romano said. “I followed close behind Logan, leaving Diego.”

By the time the trio had crossed the bridge back to the mainland, Vanegas had dropped back but was still strongly in third place. Musumeci continued to lead, but Romano was matching his pace just a few meters behind.

“After the U-turn on Lighthouse Road is where I was finally able to pass Logan,” Romano said. “I was hurting, but I could tell Logan was close to his limit at that point.”

“I was extremely happy with my time and was very pleased to get first place,” Romano said. “I had never raced at this distance before and I couldn’t have asked for a better race for my [half-marathon] debut. The cold crispy conditions were perfect for racing and competition was strong. I really enjoyed racing against great athletes like Logan and Diego. Having been more of a track guy in college, I kind of surprised myself with how much I enjoyed racing a half-marathon.”

Musumeci, who finished four minutes faster than his goal time, was equally pleased with his debut.

“I was extremely happy with the race and it was an incredible experience for my first half-marathon ever. The race strategy for me was to keep up my goal pace (6:06 mile) for as long as possible. This pace was already crushed after Mile 3, when I sped up in an effort to keep up with the leaders, and Robbie soon followed behind.

“We continued trailing until around Mile 7-7.5 where we then passed first place and continued our faster pace (~5:45). After that, it was only a race between Robbie and me for first and second, where we continued to run negative splits, and he eventually pulled away with 1.5 miles to go.”

Anna Staats, at 20 years old a seasoned marathoner and winner of the last Lower Potomac River Marathon and its 10-mile sister race in 2019, breezed through the flat 13.1-mile course in 1:30:01 to win the women’s gold medal.

Only a week earlier, the 2017 Great Mills High graduate had run the hilly Atlanta Marathon, finishing in a personal record 3 hours and 12 minutes, for 13th place among the women.

“I definitely felt the hills from Atlanta a lot more than I thought I would,” Staats said.

“The sunrise was gorgeous, which was a nice bonus,” she remarked of the view that greets runners as they cross the bridge to St. George Island.

Leanne Powers, 34, of Lusby, finished exactly 10 minutes behind Staats for the silver medal. Samantha Cole, 51, of Arlington, Virginia, trailed Powers by just over two minutes, winning the bronze medal with a 1:42:07 finish.

David Moretz, 24, of Lexington Park, finished seventh overall in 1:26:25 to win the men’s title of club champion of Chesapeake Bay Running Club, producers of the race. Winning the women’s title was Roseanne McEwan, eighth female overall in 1:44:48. McEwan, 42, of Hollywood, was also club champion at both Lower Potomac River races in 2019.

The Lower Potomac River Half-Marathon, produced by Chesapeake Bay Running Club and hosted by the Paul Hall Center for Maritime Education, routinely filled its 200-runner capacity each year until the D.C. Rock & Roll Marathon, a commercially produced mega-event, moved to the same weekend beginning in 2016. Since then, the number of registrants dropped to below 100, and the club elected to change to a half-marathon to attract more runners. Increased development and resultant traffic along the northern part of Route 249 was also a consideration in the club’s decision.

For complete results, go to www.cbrcmd.org.