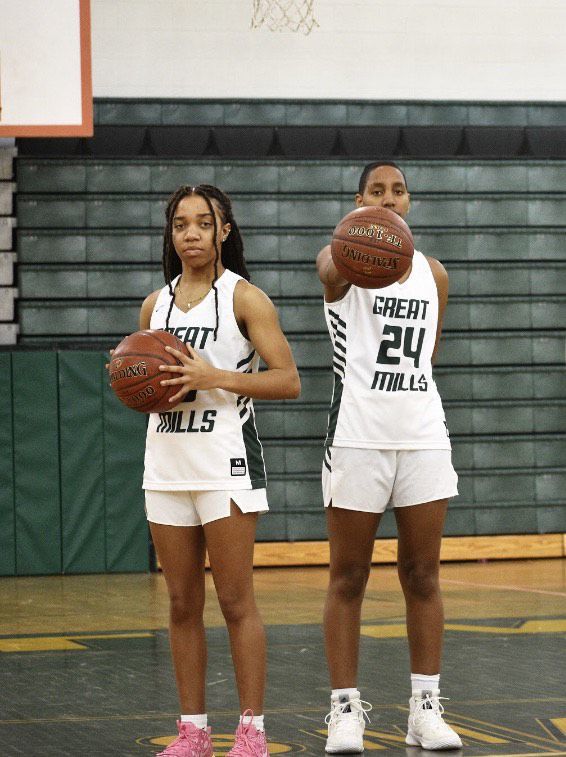 Great Mills High School seniors Kyla Daniels, left, and Toyin Allen have been friends and teammates since elementary school. Daniels is headed to Mars Hill College in North Carolina, while Allen is off to CCBC-Essex.

Great Mills High School seniors Kyla Daniels, left, and Toyin Allen have been friends and teammates since elementary school. Daniels is headed to Mars Hill College in North Carolina, while Allen is off to CCBC-Essex.

Great Mills (24-3 overall) opened the season by winning its first 18 games and later defeated North Point to win the Class 3A South Region I championship game. The Hornets were led by Daniels, who ended the campaign averaging 12.0 points, 2.9 rebounds, 2.3 assists and 2.3 steals per game and now is headed on to Mars Hill, an NCAA Division II school.

“It was a great senior season,” said Daniels, who was picked as the All-St. Mary’s County girls basketball Athlete of the Year. “We finally beat North Point. They had really crushed us my freshman year, so to beat them twice [during the regular season and in the 3A South Region championship game] really meant a lot. I’m looking forward to playing at Mars Hill. I think I can fit right in and have an impact right away. They have really good coaches and good players back.”

From the moment she joined the team as a freshman, Daniels, along with fellow freshman and longtime friend Toyin Allen, Great Mills head coach Matt Wood could sense that his 2020 class was bordering on something special.

“One thing I remember about Kyla is she had the physical tools to play right away,” Wood said. “She and Toyin both had the talent to play right away and they both worked well together on the floor, having basically played together for years before coming to Great Mills. They definitely accomplished a lot during their four years with us.”

Allen is heading to Community College of Baltimore County-Essex this fall for basketball, while seniors Alaina Bernich and Taylor Dean — both All-County honorable mention selections — are staying close to home at the College of Southern Maryland. CCBC-Essex and CSM are each members of the Maryland Junior College Athletic Conference.

“I think all of the girls are going to be able to play in college,” Wood said. “I think Mars Hill is great fit for Kyla. She can go there and play right away. I know Toyin was excited to sign with CCBC-Essex to play there for two years and then go to a four-year school. Taylor really improved this past season and I think she’ll do well at CSM.”

Daniels and Allen had played basketball together for nearly 10 years before heading their separate ways this fall. While she is playing at Mars Hill and her best friend will be at CCBC-Essex, Daniels will have her thoughts on her longtime best friend and teammate.

“Me and Toyin have always played on the same team, so next season will be different,” Daniels said. “I know she is going to do well at college in Baltimore. She’s going to do really well there. We won’t see each other much, but I know we’ll stay in touch.”