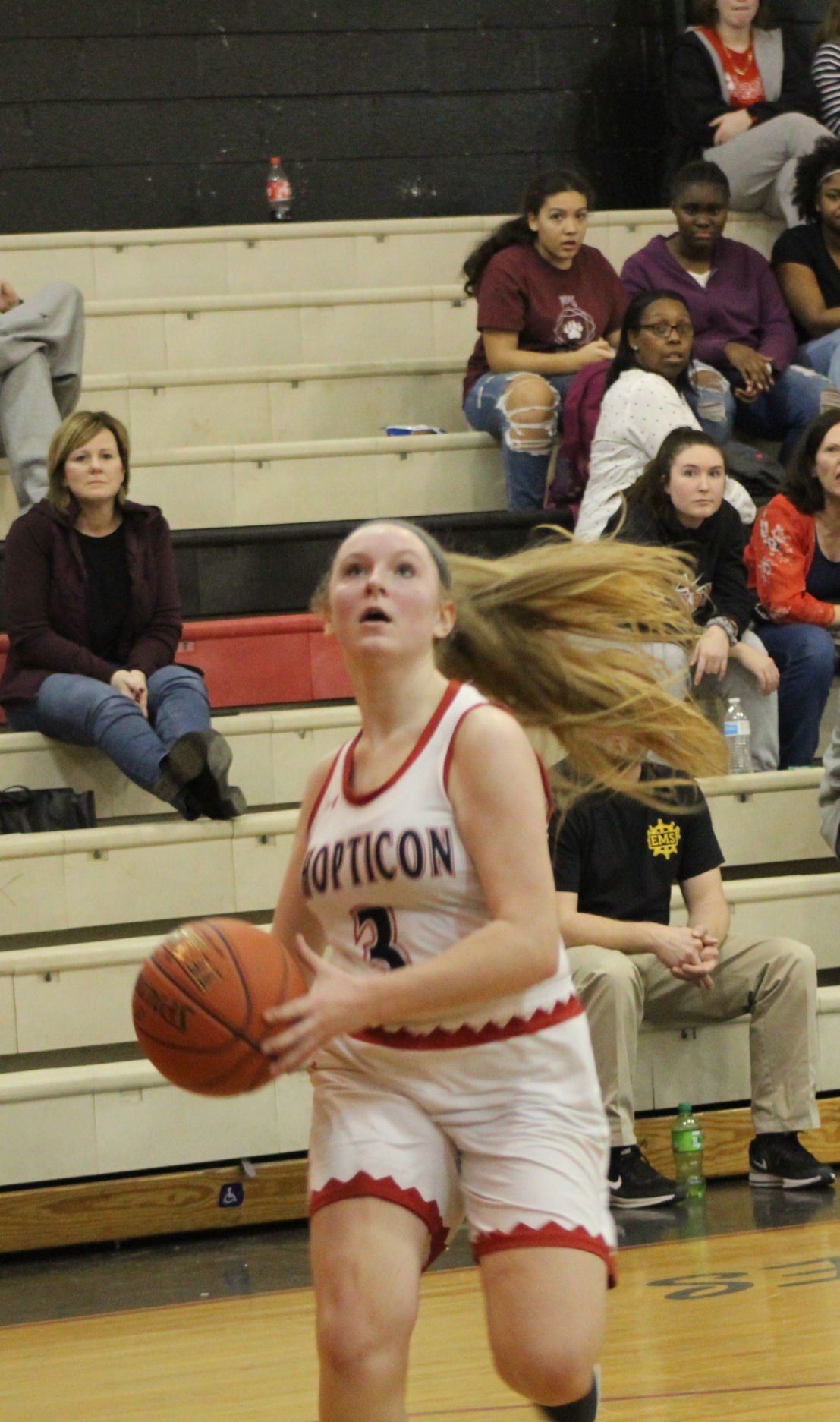 Chopticon freshman Caleigh Bergling goes in for a layup during Friday’s SMAC Chesapeake Division doubleheader versus visiting Leonardtown. Bergling helped the Braves girls win on senior night 51-50 with a go-ahead three-pointer in the closing seconds. 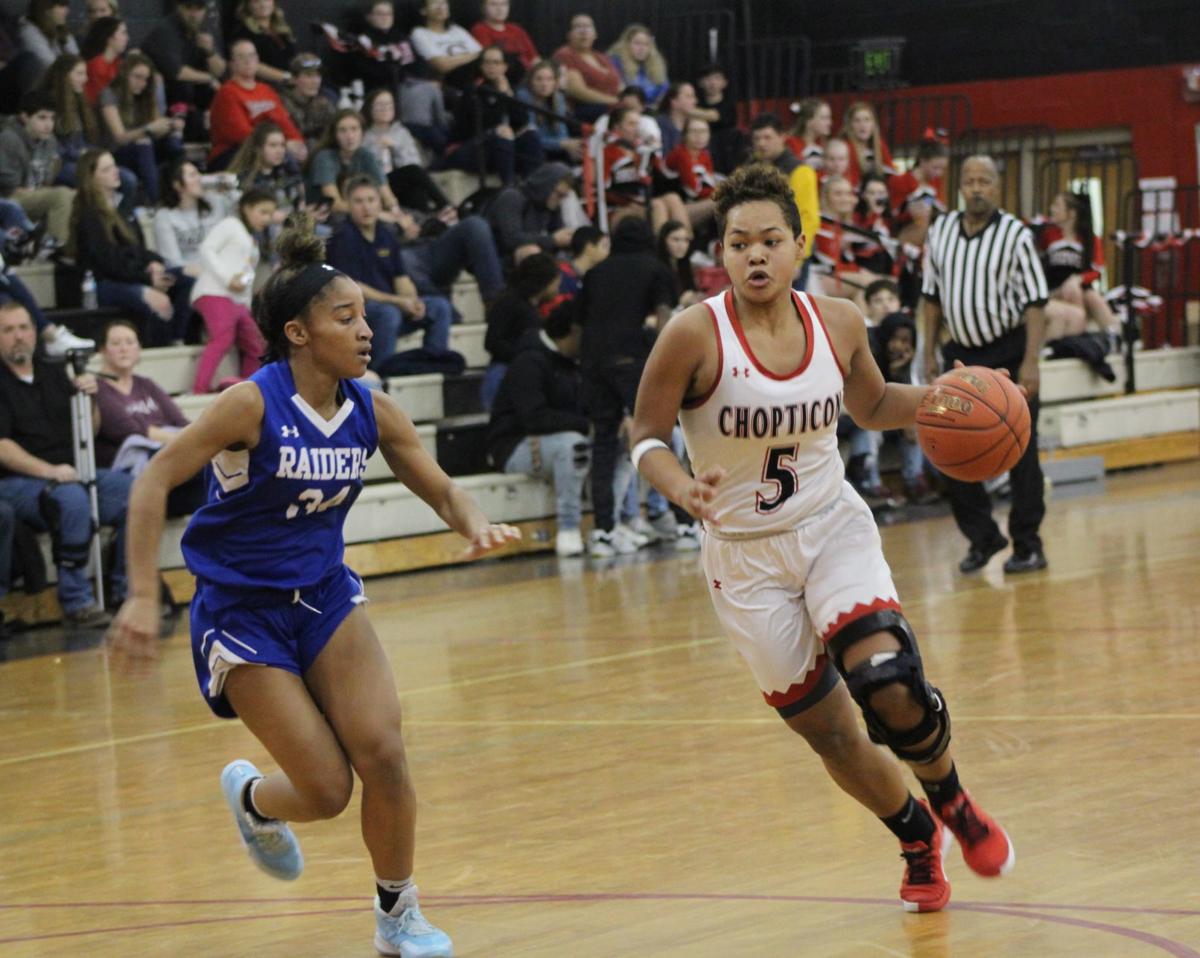 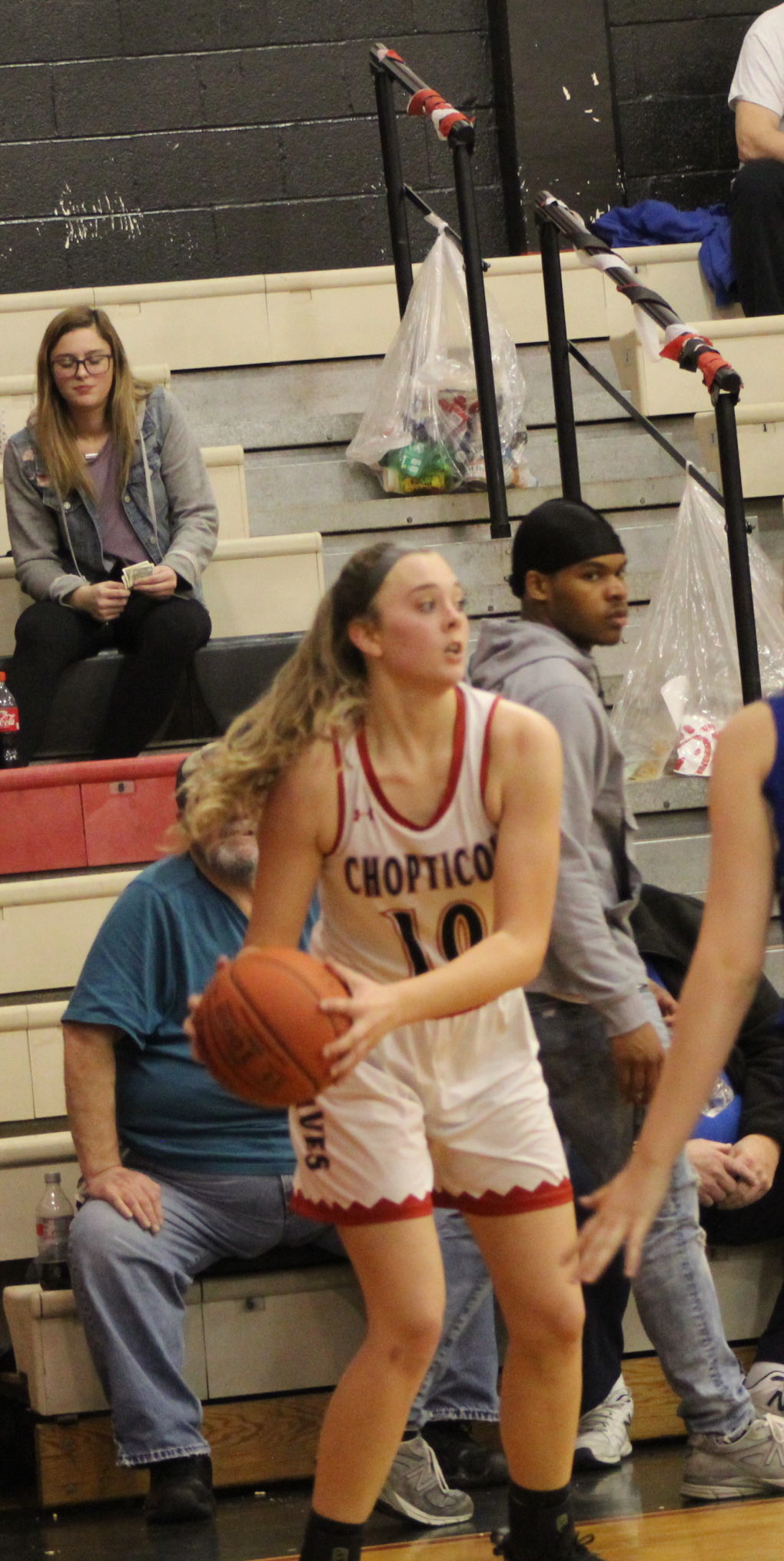 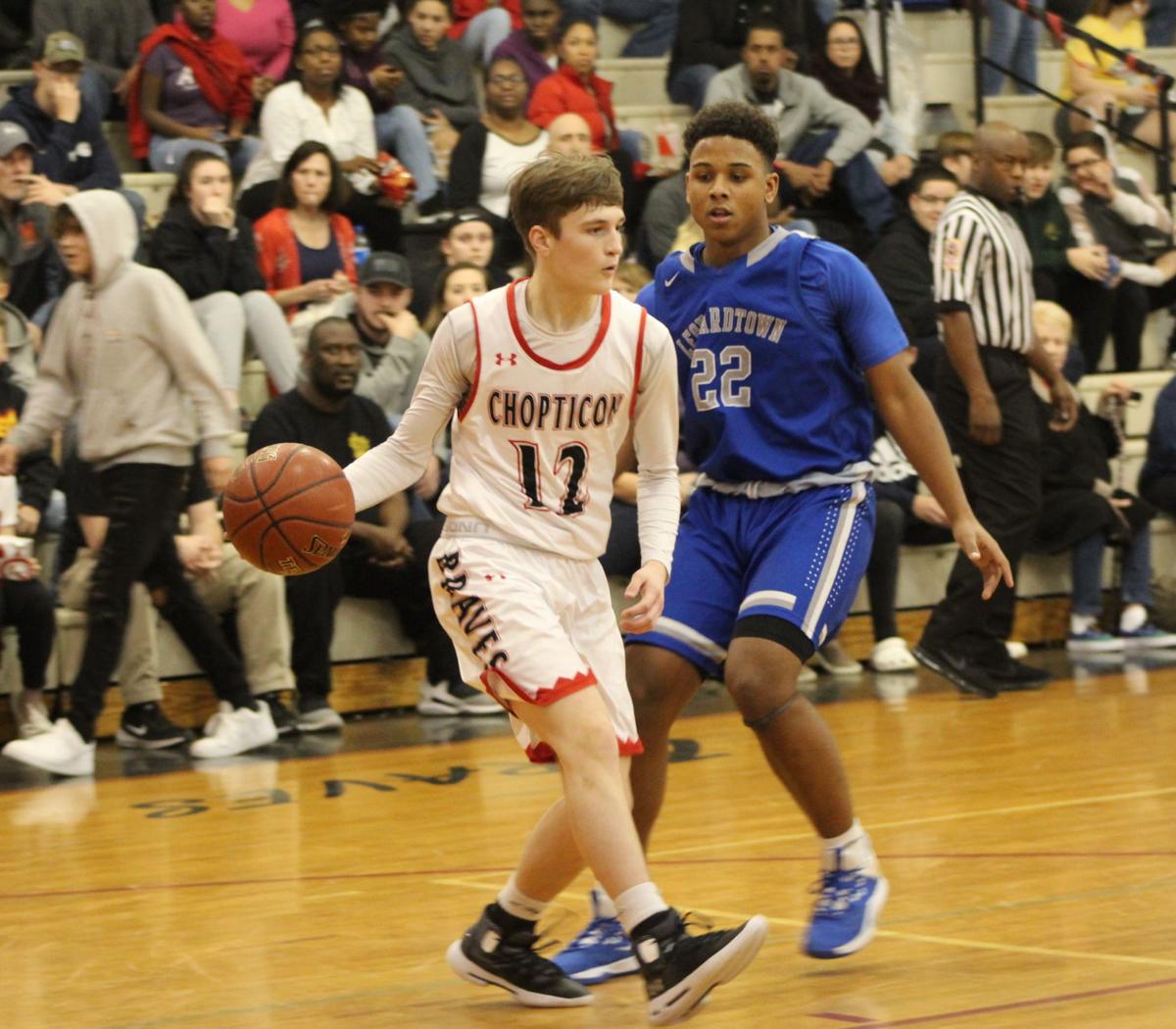 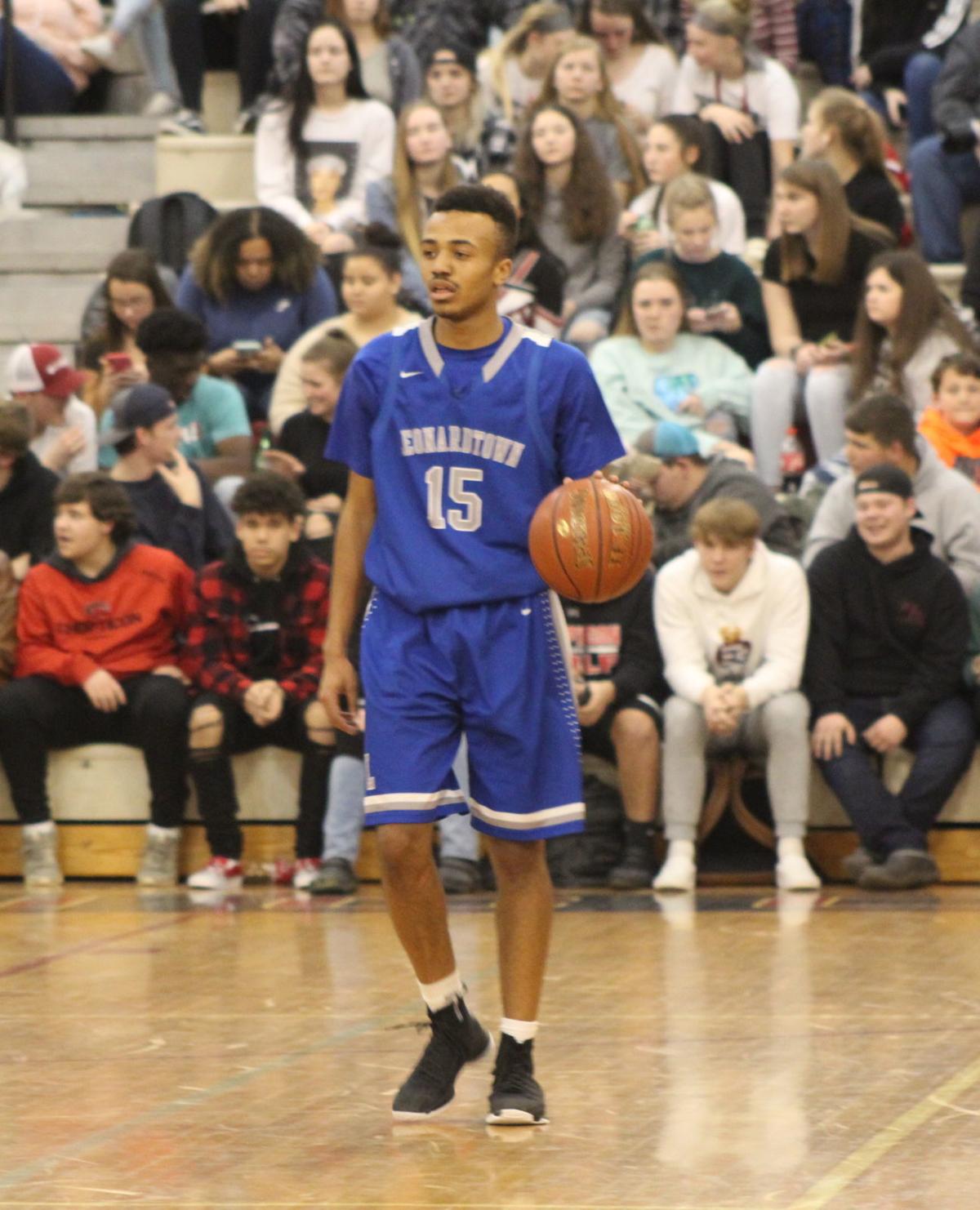 Chopticon freshman Caleigh Bergling goes in for a layup during Friday’s SMAC Chesapeake Division doubleheader versus visiting Leonardtown. Bergling helped the Braves girls win on senior night 51-50 with a go-ahead three-pointer in the closing seconds.

Each school got to celebrate a win as the Raiders boys picked up an 80-65 victory, and the Chopticon girls earned a 51-50 win in the second game of the doubleheader.

“The game was very physical,” Braves girls head coach Joe Cook said. “I kind of wish the whistles were blown a little bit more, but it was physical and both teams battled through it. Our team keeps fighting and I am very proud of our kids.

The Chopticon girls (13-6, 6-3 SMAC Chesapeake) honored its three seniors before the game as part of senior night.

“These seniors are awesome,” Cook said. “They mean everything. Darcy [White], Caitlyn [Burch] and Katelynn [Perrotta] were tired and didn’t come out for very much [of the game], but they just kept fighting.”

Ironically on senior night, Braves freshman Caleigh Bergling sank the go-ahead three-pointer with the hosts trailing by two points, 50-48, in the closing seconds to help the Braves earn the comeback win.

“Lilly [Reynolds] made a nice pass and Bergling buried it,” said Cook, whose team is scheduled to host Patuxent at 6:30 tonight. “It was a nice shot, but then we had to play defense. [Leonardtown’s Jasmine Carter] had a nice shot down there that almost went in, so it was a good game.”

Raiders second-year head coach Tylita Butler called a timeout with her team trailing by one point with four seconds left. Out of the timeout, Carter got all the way to the basket before missing a shot in the paint at the buzzer amid a couple of Chopticon defenders.

“We played hard and I can’t take anything away from both teams coming out and it being an in-county game and showing that we are both forces to be reckoned with,” Butler said. “Chopticon is playing really well and they are an aggressive team. For their freshman in Caleigh to knock that three down at the very end of the game, that is one of the ones that I wish we could have back, but our girls fought hard.”

The Braves attempted 33 foul shots compared to 20 for Leonardtown (6-9, 2-6), but Butler noted that officials are something her and her team cannot control.

“As far as the refs, it is what it is. We can’t really do too much about that,” said Butler, whose team is slated at Huntingtown at 6:30 tonight. “The only thing I can control is my team, and the only thing they can control is themselves. That is what I teach them all the time.”

Leonardtown led 48-44 with about 90 seconds left in the game before a Burch putback cut the Raiders’ lead to 48-46. Bergling tied the game at 48 with a layup with just less than a minute remaining.

Raiders sophomore Carmen Jackson nailed a mid-range jumper that put the visitors in front 50-48 with 30 seconds left before Bergling’s go-ahead triple off an inbounds pass from Reynolds put the Braves in front to stay.

“Leonardtown is tough and they were fighting, but Bergling hit a big shot at the end,” Cook said. “We had a lot of other stuff going on too like rebounding, fighting hard, Darcy hit some big shots at the end, but it was a total team effort.”

“[Chopticon] is a really well-coached team, and it is always nice to be able to beat one of your rivals two times in a year,” Barber said. “Our kids just made more plays tonight. We made lots of mistakes, but we were able to make enough shots to spread a little bit of a lead and get the win.”

The Raiders were flying high in the first quarter as senior Eric Long finished off an alley-oop slam dunk from a lob pass from junior Martin Wilson in transition, and senior Tyreke Herbert threw down a left-handed slam dunk on the fastbreak after a steal.

“Our kids were really fired up. We had two seniors get two pretty cool dunks, but for me as a coach and being a little bit older, it’s two points. They loved it though,” Barber said. “I just wish that how well we played in that first quarter could have carried over. We took a lull in the second quarter and let [Chopticon] back in the game a little bit, but I am really proud of our seniors, Martin Wilson as well as Juwaun Queen, who plays great defense and does all of the little things that don’t show up in the stat sheet.”

Herbert finished with 14 points, 12 rebounds, nine assists and five steals. Long notched a double-double with 27 points and 11 rebounds. Wilson scored 18 points to go along with five boards and senior Drew Weller scored six points while recording 11 rebounds. Queen finished with six points off of the bench, all in the first half.

The Cavaliers knocked the Hornets from the ranks of the unbeaten, overcoming the Hornets 56-52 in overtime in a SMAC Chesapeake Division game at Calvert on Friday night.

The Cavaliers (15-4, 7-2 SMAC Chesapeake after a 45-39 nondivison win over Lackey on Monday) trailed their guests by two points at the half, but surged in front during the third quarter to lead 37-33 with eight minutes to play.

Great Mills (18-1, 8-1) came back and the teams were tied at 48 at the end of regulation before the hosts outscored the Hornets 8-4 over the extra period.

The Cavaliers are scheduled to host Northern at 6:30 tonight, while the Hornets’ next slated game is at Leonardtown at 6:30 p.m. Friday.