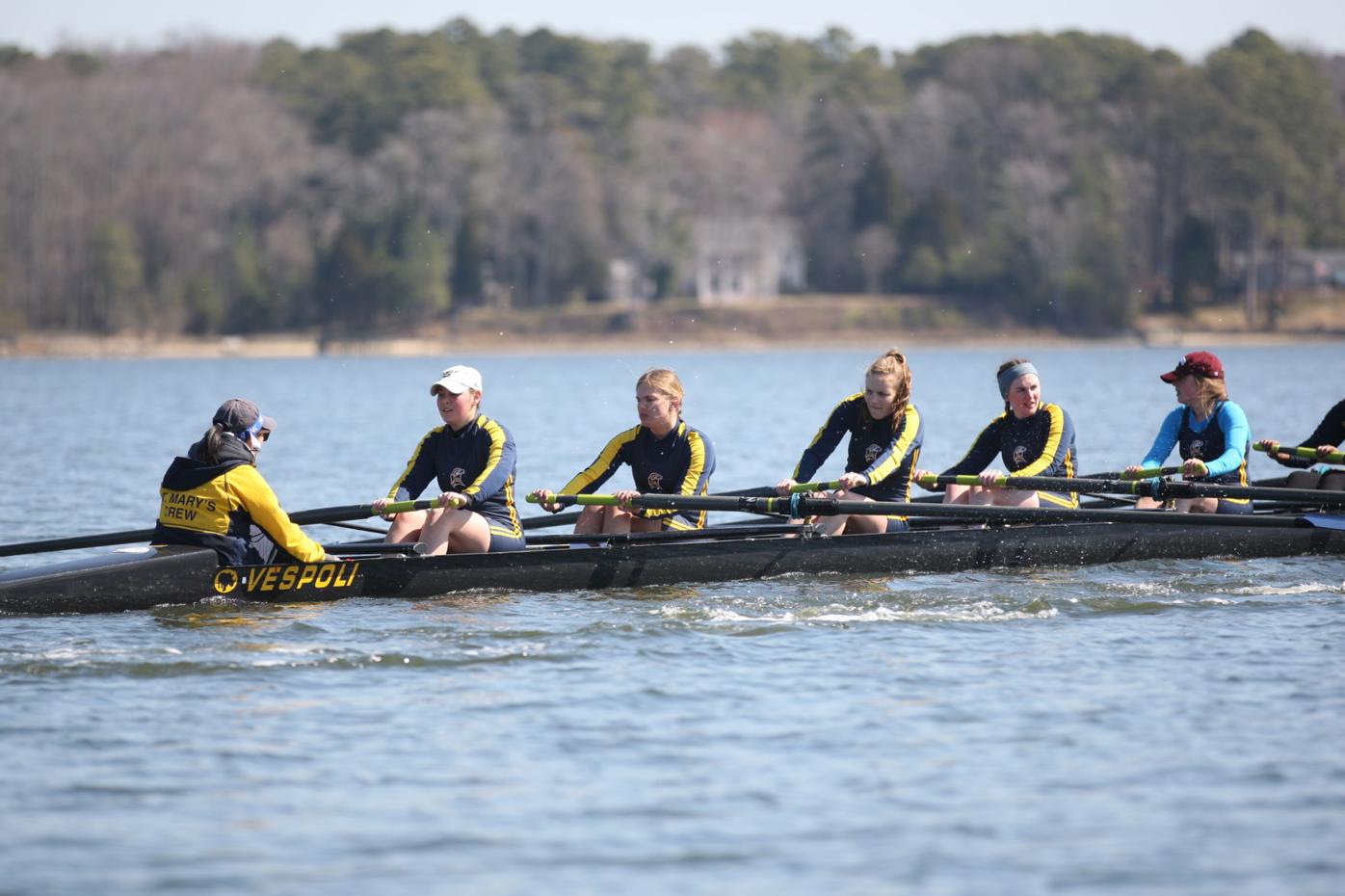 The St. Mary’s College of Maryland women’s rowing team competes Friday against Franklin & Marshall (Pa.). The team picked up a win in the third varsity eight during the dual meet. 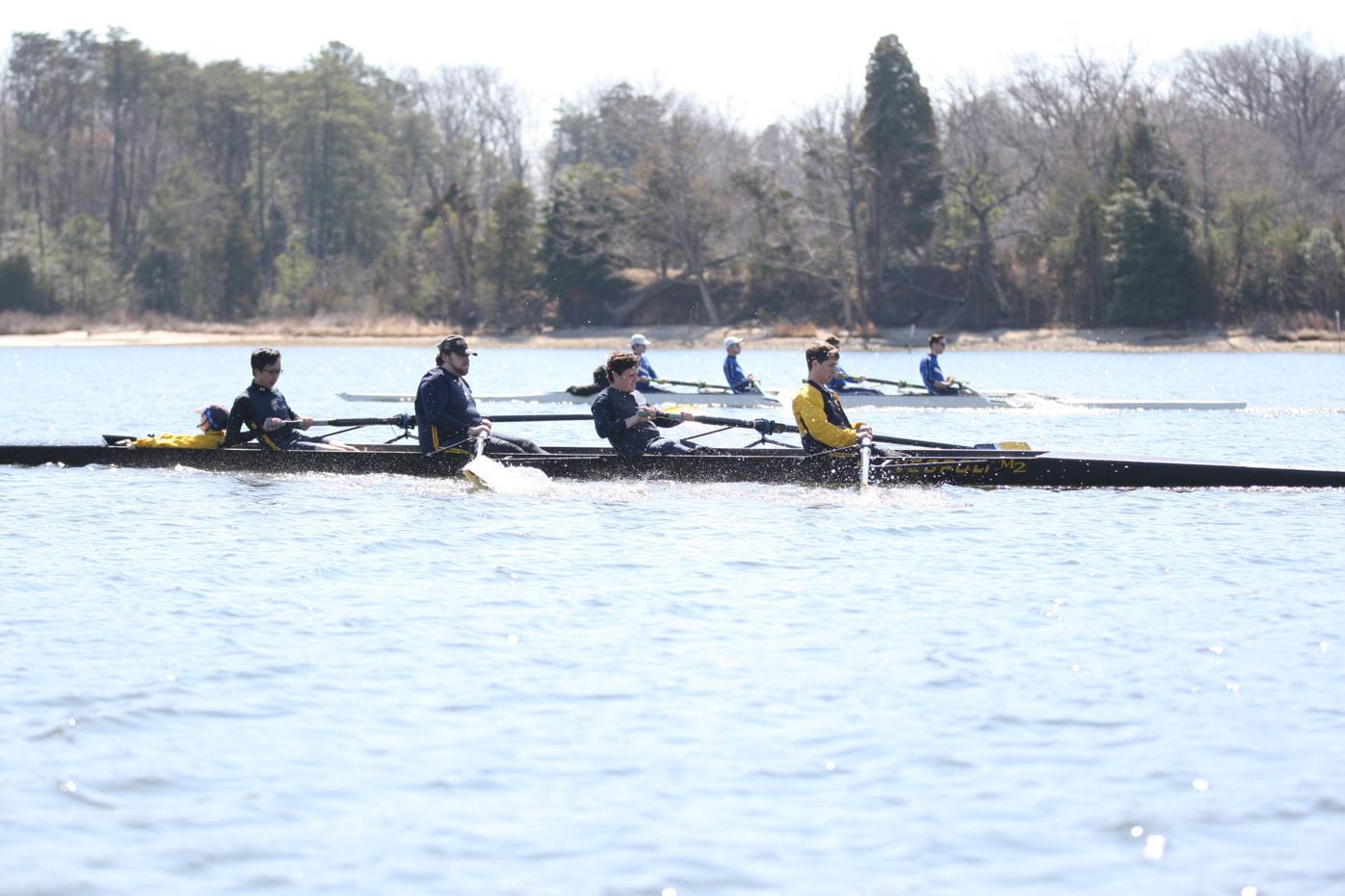 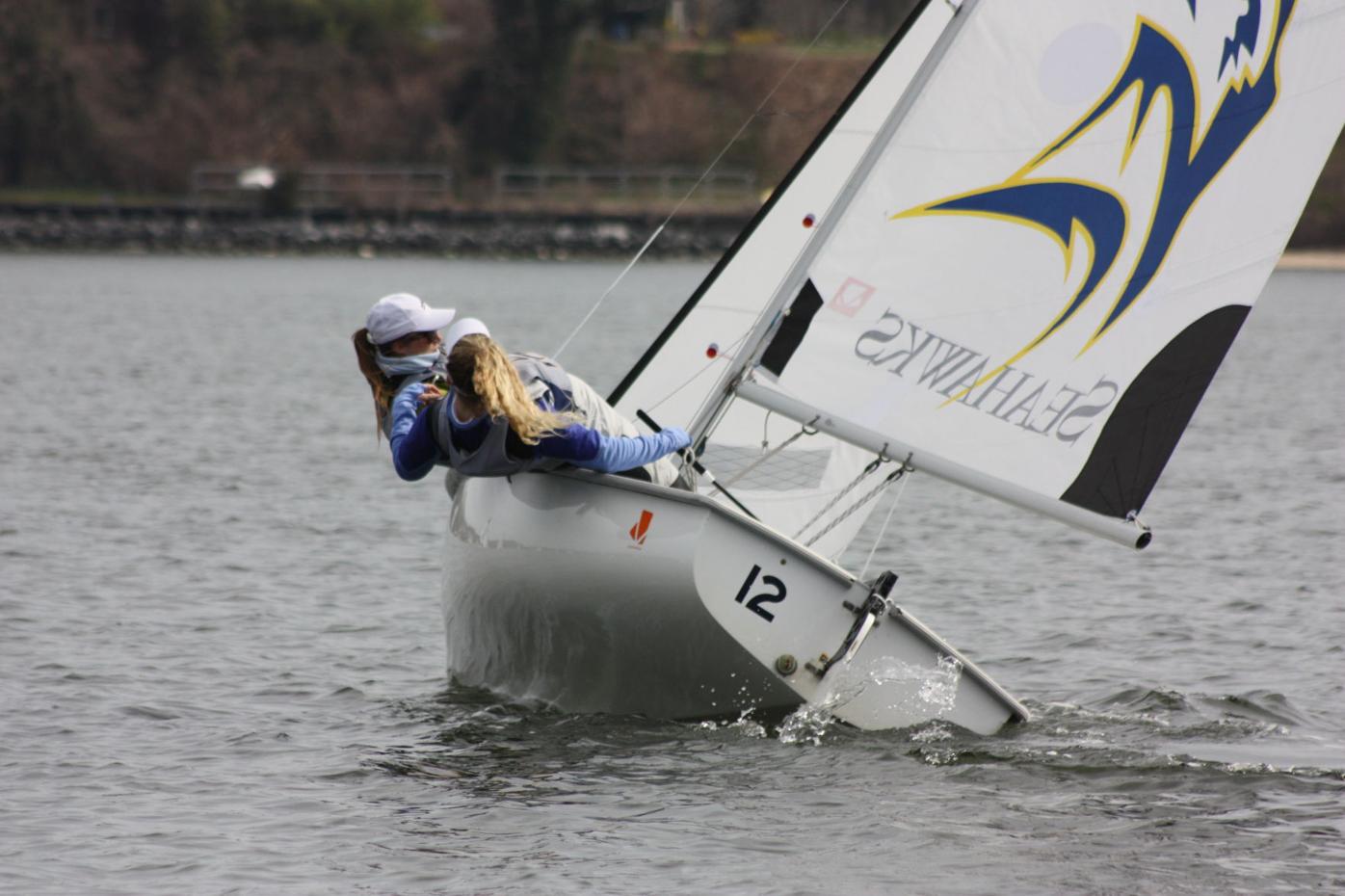 St. Mary’s Lizzie Dennison, left, and Greer Wattson tack hard during the Flying Juniors race at the St. Mary’s Women’s Intersectional on March 18 and 19. The duo placed 12th out of 18 teams.

The St. Mary’s College of Maryland women’s rowing team competes Friday against Franklin & Marshall (Pa.). The team picked up a win in the third varsity eight during the dual meet.

St. Mary’s Lizzie Dennison, left, and Greer Wattson tack hard during the Flying Juniors race at the St. Mary’s Women’s Intersectional on March 18 and 19. The duo placed 12th out of 18 teams.

The St. Mary’s College of Maryland spring athletic teams are hoping for success this season on the fields, diamond, courts as well on the St. Mary’s River as its sailing and rowing teams get their seasons underway.

The Seahawk women’s rowing team picked up a win in the third varsity eight during a dual meet March 17 against Franklin & Marshall (Pa.).

The women’s team has seven seniors among its 29 rowers, including walk-on Angelina Wilson, a Great Mills High School graduate from Great Mills.

The Seahawks placed second in the varsity eight race (7:09.52) and in the second varsity race, a timing error led to no time taken for St. Mary’s.

This is the first season the Seahawks are competing in the Mid-Atlantic Rowing Conference after a club season last season, which included a second-place finish in a 12-team event at Penn State.

“It was a great result for us and a really great season,” said first-year head coach Dan Hagelberg, reflecting on the club season. “It sent a message that next year we’re coming to be a serious part of this league. I’d like to see us lay a foundation that we can build on to win in the coming years.”

In the men’s race, the St. Mary’s varsity eight team of coxswain Leslie Malick, bow Brad Davidson, stroke Perry Conner and Collin Kroh, Ben Lee, Sean Tulley, Conor Burke, Justin Hoobler and Joseph Cirillo (a Northern High School graduate from Chesapeake Beach) was awarded the win in 6:25.6 when, according to a St. Mary’s College athletics news release, “the Franklin & Marshall crew appeared to enter St. Mary’s water despite warnings to steer away … The decision was made to relegate the F&M varsity behind the crew they interfered with.”

“We have great senior leadership, so it’s definitely a year to make a stand and see what they can do,” Hagelberg said of the men’s team, which has 14 rowers, five of whom are seniors. “We’ve had great success with those guys leading the way and a lot of them are finding a lot of speed this year they didn’t know they had and that’s one of our greatest strengths across the board. We don’t particularly know how fast we can be and the guys are finding it all at once, it seems like. [They’ve] dropped 20 to 30 seconds over [when] people scrape and claw for four seconds so to drop that many is just an incredible feat. I’m incredibly excited.”

The next event for both teams is the Murphy Cup, which will be held March 25 on the Schuylkill River in Pittsburgh.

“The more hard work we do the more I see what I want to see out of this team and they’re rising to the challenges I’ve put before them,” said Hagelberg, who puts his teams through a rigorous training regimen. “I don’t know if they knew how good they can be or what their bodies were really capable of. I had a pretty hard training plan last year and this year it’s been even harder and they’ve continued to rise to it. We have the benefit of knowing that we’re faster than we were last year and we’re looking forward to seeing where we stack up.”

St. Mary’s women’s sailors competed March 18 and 19 in the 18-team St. Mary’s Women’s Intersectional, and Carolyn Smith and Julia Monro led the Seahawks to an eighth-place finish in the A Division sailing 420s.

St. Mary’s finished with 97 points and was just five points out of fifth place. Boston College won the race with 64 points.

In the B Division, Greer Wattson and Lizzie Dennison B division sailed the Flying Juniors to a 12th-place finish. The Seahawks finished with 131 points. South Carolina’s College of Charleston won the race with 65 points.

“This is one of the country’s most competitive women’s events of the year bringing schools from across the country together at one of the premier venues,” said St. Mary’s head coach Adam Werblow, now in his 28th season. “We are trying to use each race to improve our starting skills as well as developing tactical conservatism in the shifty northerly winds.”

On March 10 and 11, skipper Wattson along with Dennison and Grace Papp took top spot at the Navy Women’s Spring Intersectional, which Werblow said was “a big national event and it was their best performance their whole career.”

St. Mary’s men and women also competed in the Graham Hall Interconference Regatta on March 18 and 19 at the U.S. Naval Academy and won 6 of 15 races to place 10th overall.

Skippers were Bradley Adam, Kyle Burgess and Jonathan Lutz, while the crew was comprised of Hannah Chapman, Shelby Jacobs and Lydia McPherson-Shambarger. The Seahawks lost their first four races and six of their first seven, but later rallied to win four of their final five events, including a 1-2-3 finish against Fordham to start the streak.

“Our goal is always the same, we want to be able to compete for the national championships,” Werblow said. “We take the student-athletes we have and we prepare them the best they can and have fun competing throughout the season and try and analyze what we’ve done in the early part of the season and hopefully get better.”