St. Mary’s Ryken junior Devin Ceaser goes up for a layup during Thursday’s WCAC game versus Bishop McNamara. Ceaser scored 25 points in a 59-51 loss for the Knights. 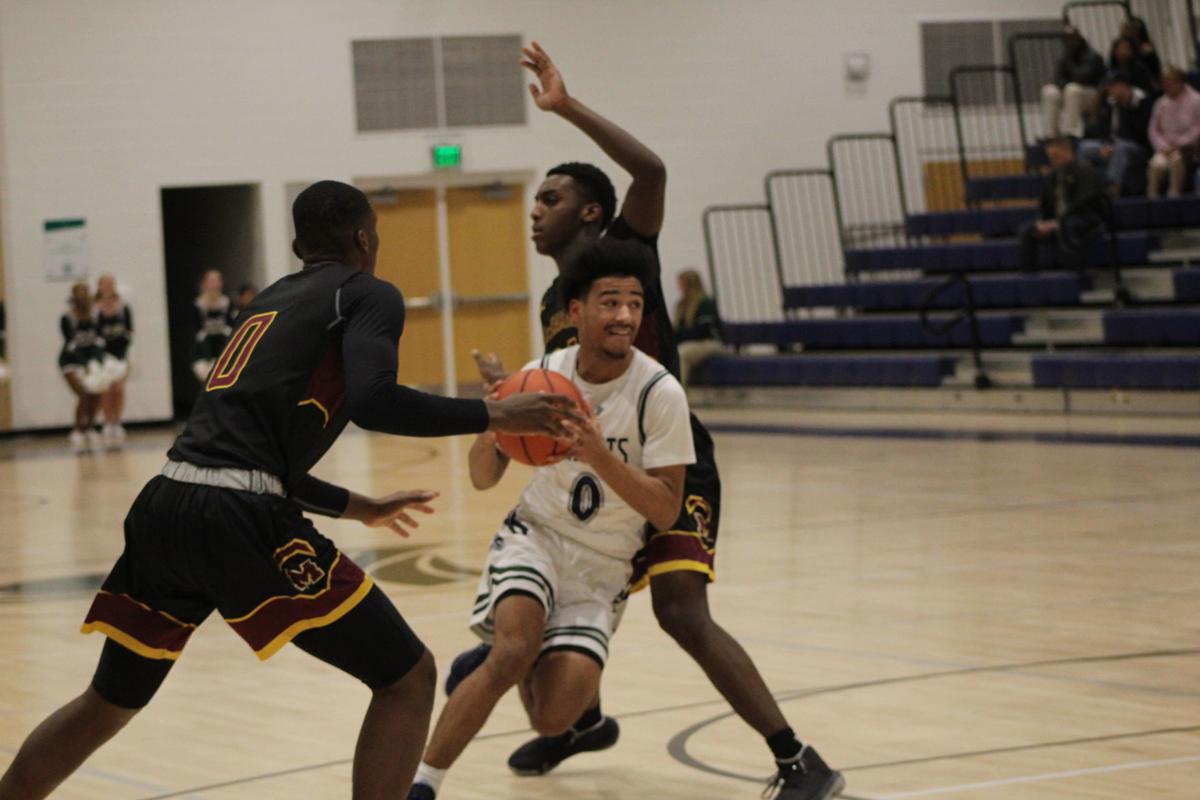 St. Mary’s Ryken junior Ben Williams drives to the basket during Thursday’s WCAC game versus Bishop McNamara. The Knights fell by a final score of 59-51. 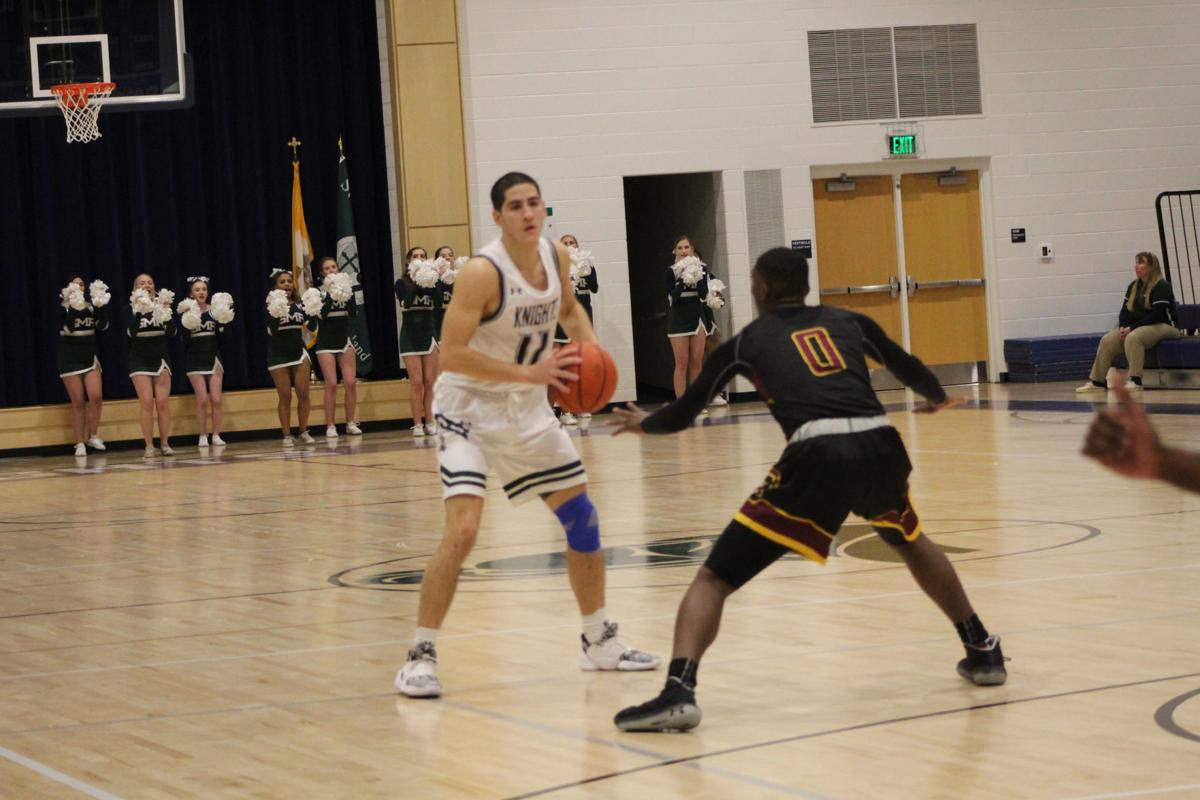 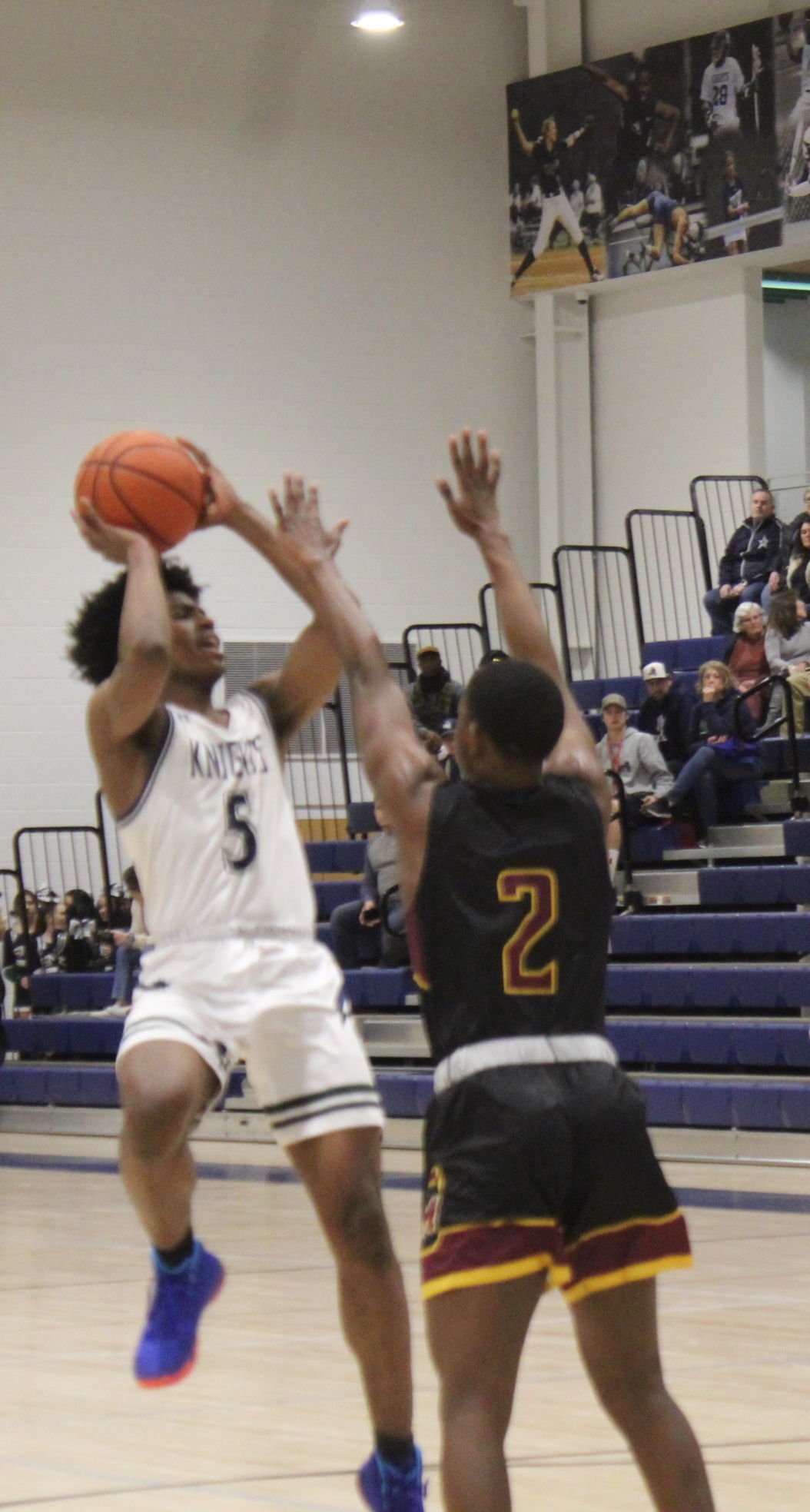 St. Mary’s Ryken junior Devin Ceaser goes up for a layup during Thursday’s WCAC game versus Bishop McNamara. Ceaser scored 25 points in a 59-51 loss for the Knights.

St. Mary’s Ryken junior Ben Williams drives to the basket during Thursday’s WCAC game versus Bishop McNamara. The Knights fell by a final score of 59-51.

With a young squad, St. Mary’s Ryken head boys basketball coach Walter Booth knows growth with his team in each game is just as important as earning a win.

“I thought our guys showed a lot of growth tonight,” Booth said. “We have been talking a lot about playing 32 minutes of playing the Ryken basketball way of playing hard and together. I thought the guys did a lot of that and a lot of other good things, so I am proud of them for that.”

After trailing by 10 points in the final quarter, the Knights trimmed their deficit to just four points with 3 minutes 40 seconds left to play, but fell in the end to the visiting Bishop McNamara Mustangs from Prince George’s County in a Washington Catholic Athletic Conference contest on Thursday by a final score of 59-51 in St. Mary’s Ryken’s Donnie Williams Center.

“We have to do a better job down the stretch of just finishing and making free throws,” Booth said. “We had a couple of unforced turnovers down the stretch that we didn’t have throughout the game, but those are fixable. We can learn from it.”

Knights forward Kenny McKoy missed Thursday’s game, but Booth noted despite missing his contributions on the court, other players stepped up in his absence.

“We were missing Kenny McKoy tonight and he has a big part of this season and almost like a double-double for us. With him not playing tonight, we were a little shorthanded, but I thought the other guys stepped up,” Booth said. “Vlad [Malavrazic], our transfer from Serbia, and Wisdom Rogers did a great job battling because Favour [Aire] is one of the best bigs in the conference and I really liked the way they fought and competed on the defensive end.”

Aire was held in check by the Knights on defense and scored just nine points for the Mustangs in the win.

“In [the WCAC], every night is rough,” McNamara head coach Keith Veney said. “This league is like the ACC of high school basketball, so every game is a hard game and especially on the road. I am just happy to get the win. We just have to keep plugging one game at a time. Every win is a valuable win.”

For much of the first half, both teams wrestled back and forth for the advantage on the scoreboard. McNamara held a 13-12 lead after the end of the first quarter and led by two points at the half, 31-29.

“We are growing up,” Booth said. “We have a young team with only one senior in Luca [Vasile], so it is really just maturity. I thought those guys are really starting to buy in and believe that we got a lot of talent.”

After trailing 48-38 with 6:04 left to play, Booth called a timeout that sparked a rally from his team. St. Mary’s Ryken pulled to within four points at 50-46 with 3:40 left to play, but was unable to get any closer as the Mustangs went on a 6-0 scoring run to push their lead back to 10 points with just less than 90 seconds left.

Devin Ceaser led the Knights with 25 points, which included knocking down three three-pointers.

“We played DeMatha and St. John’s tough and those teams are ranked in the country,” Booth said. “We know we can play with anyone in the country, so now it is just believing that we can win those games and finish those games out. I think those guys, to their credit, are starting to believe and buy into what we are teaching them. That is huge for us. I am excited and I can see the growth. I think the future is bright for this group.”

Veney also noted he thinks the St. Mary’s Ryken program is on the rise.

“[The Donnie Williams Center] is an incredible facility,” Veney said. “I know that Ryken is on the up and up and it is going to be even tougher coming here in the future and trying to win.”

Thursday night’s loss was the first of three defeats in four days for the Knights, all coming in WCAC contests. They fell 93-60 to Paul VI of Virginia on Saturday, then lost 93-75 to Bishop Ireton of Virginia on Sunday, which was the makeup of a Jan. 7 postponement.