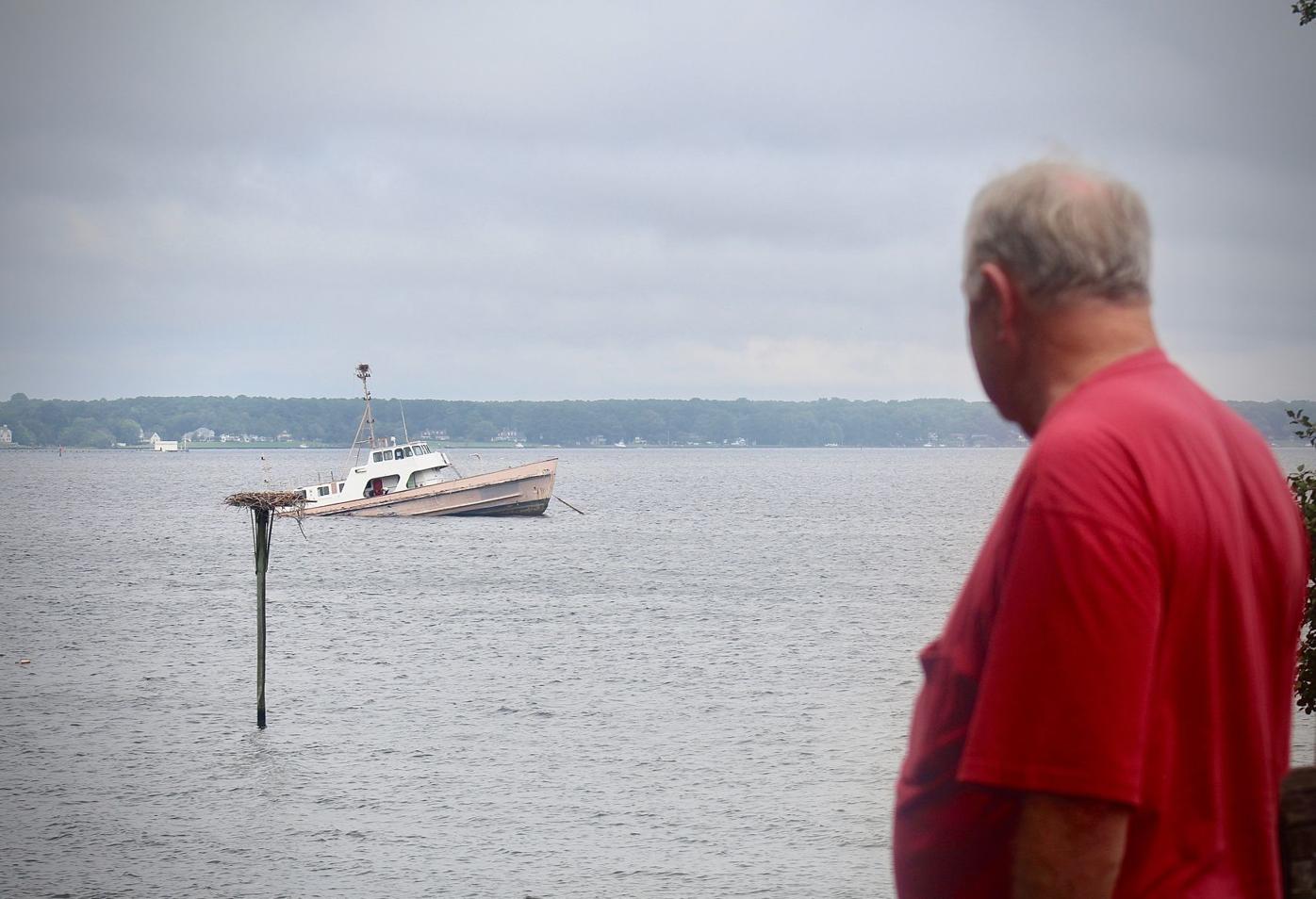 Tom Daugherty on Tuesday observes a sinking boat that was abandoned in the Patuxent River near his property on Millstone Landing Road in June. 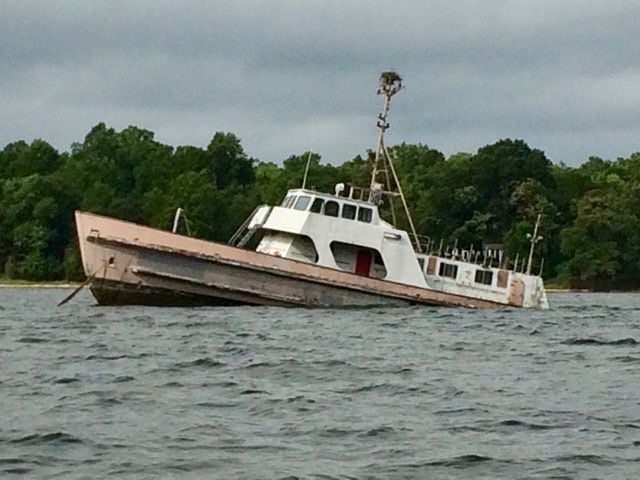 A boat abandoned in front of property on Millstone Landing Road in the Patuxent River in June 2018 begins to sink.

Tom Daugherty on Tuesday observes a sinking boat that was abandoned in the Patuxent River near his property on Millstone Landing Road in June.

A boat abandoned in front of property on Millstone Landing Road in the Patuxent River in June 2018 begins to sink.

A derelict boat that was abandoned in the Patuxent River has started to sink, and nearby residents are concerned.

Tom Daugherty, a resident on Millstone Landing Road in Lexington Park, first observed the vessel, a yard patrol boat used for Navy training, in the water in front of his property early in the summer. The boat was removed from Calvert Marina, where it was initially docked, after the owners, who live in Washington, failed to present the marina’s owner, Matt Gambrills, with the renewed insurance certificate required to dock at a marina.

Typically, Calvert Marina hauls derelict vessels to its boat yard before Gambrills begins to pursue legal action against the boat owner, he said, although that rarely happens.

Abandoning a vessel is a misdemeanor, according to state law, and conviction could result in a fine of up to $1,000 and possible jail time for up to six months for a first time offender, and up to $2,000 and one year of imprisonment for a repeated offender. Owners of derelict boats are also liable for the cost of removing the boat.

A vessel is considered abandoned or derelict when it remains for more than 30 days on public property or a private dock near private property, or more than 90 days at a private marina.

Last year, 27 derelict boats in Maryland waters were reported to Maryland Department of Natural Resources, and “about a dozen or so” in water surrounding St. Mary’s and Calvert counties “over the last few years,” Matt Negley, administrator for DNR’s abandoned boat and debris program, and Stephen Schatz, DNR communications director said. Most abandoned boats DNR responds to are left by owners who fail to insure the vessel, he said.

The boat owner, Jared Russell, a realtor, intended the boat to be converted to a restaurant, and had plans to dock it in a D.C. marina, he said.

Without insurance, Russell contacted Sea-Tow to haul the boat to D.C. in early June, but misrepresented the size of the vessel.

“I brought line for a certain pull, and it was just too much,” Robinson said. He estimated the boat to weigh around 67 metric tons “fully loaded,” and would require two boats to haul, costing between $15,000 and $20,000, he said.

Russell told Robinson not to bring the boat back to Calvert Marina, and he instead anchored it “outside the channel … so they could arrange to have another company come and tow it,” Robinson said. The boat began to sink after an unidentified person “went to my boat with a plasma cutter, and cut off the hatch in the back so it took on water,” effectively sinking “the back half of it” about a week ago, Russell said.

Natural resources officers who initially inspected the boat on June 4, before it began sinking, did not send out a bid to have it towed after observing that the vessel adhered to the lighting regulations permissible in open water, and was “not a hazard to navigation,” natural resources district supervising officer John Jowanowitch said.

“It’s at the officer’s discretion” to determine when DNR will intervene in hauling derelict vessels, Negley said.

“Is it gonna break loose? Is it gonna come up on my beach? Is there any fuel oil left?” Daugherty said, looking at the half-submerged boat on Tuesday. “Those are the things that bother me.”

The boat did not contain any hazardous material “to my knowledge,” Jowanowitch said.

Since the boat started sinking, DNR has received multiple calls from nearby residents and have attempted to make contact with Russell. It’s not yet known if Russell will be liable for hauling costs or convicted of a misdemeanor, Jowanowitch said.

“It’s a problem, it’s a huge problem,” Gambrills said. “DNR told us they can’t do anything as long as there’s a light on the boat at night. It seems ridiculous … the law needs to be looked at in order to give [DNR] more power.”

On Thursday evening, Naval Air Station Patuxent River sent a press release saying the base, as well as U.S. Coast Guard Station St. Inigoes, are monitoring the boat for any potential environmental impacts. As of that time, there appeared to be "no visible signs of oil or hazardous substances" coming from the boat, according to the release.

“We’re working closely with the Coast Guard until the owner can safely tow it off,” David Wick, Pax River installation program director of port operations, said in the release. “We will act and do everything possible to keep the Patuxent River clean and safe.”