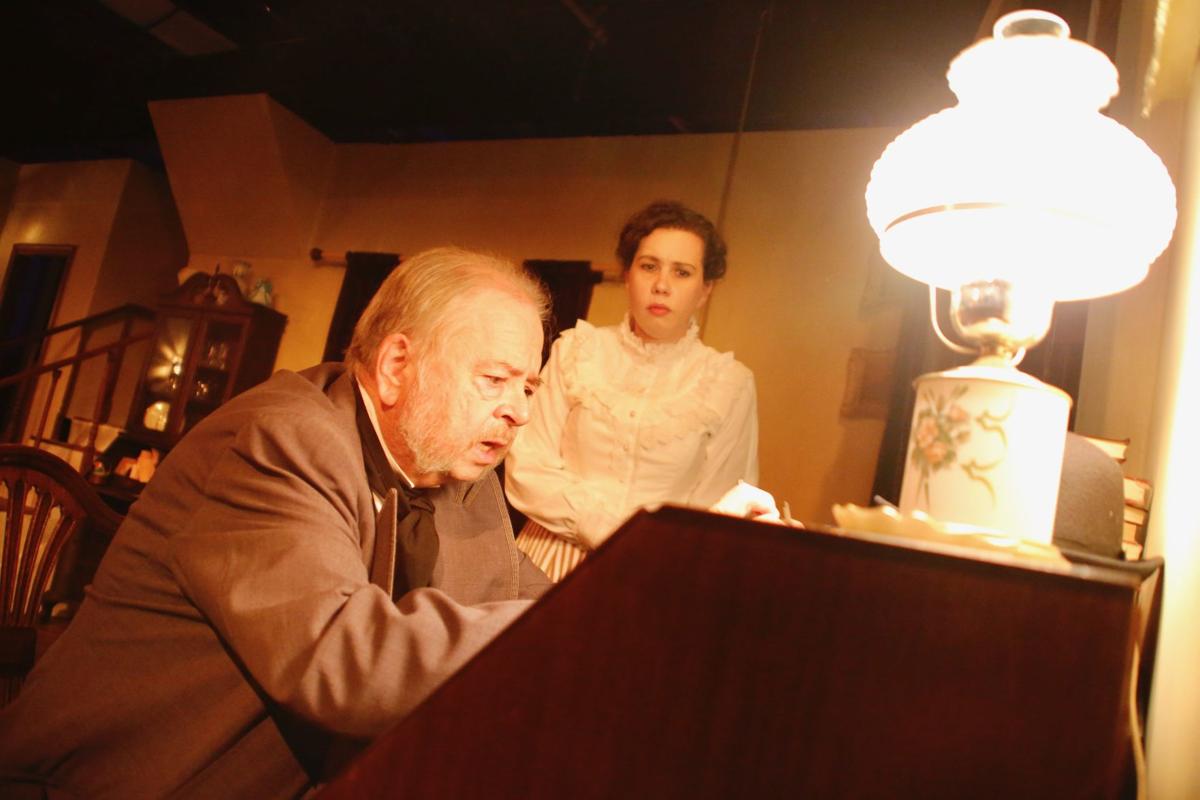 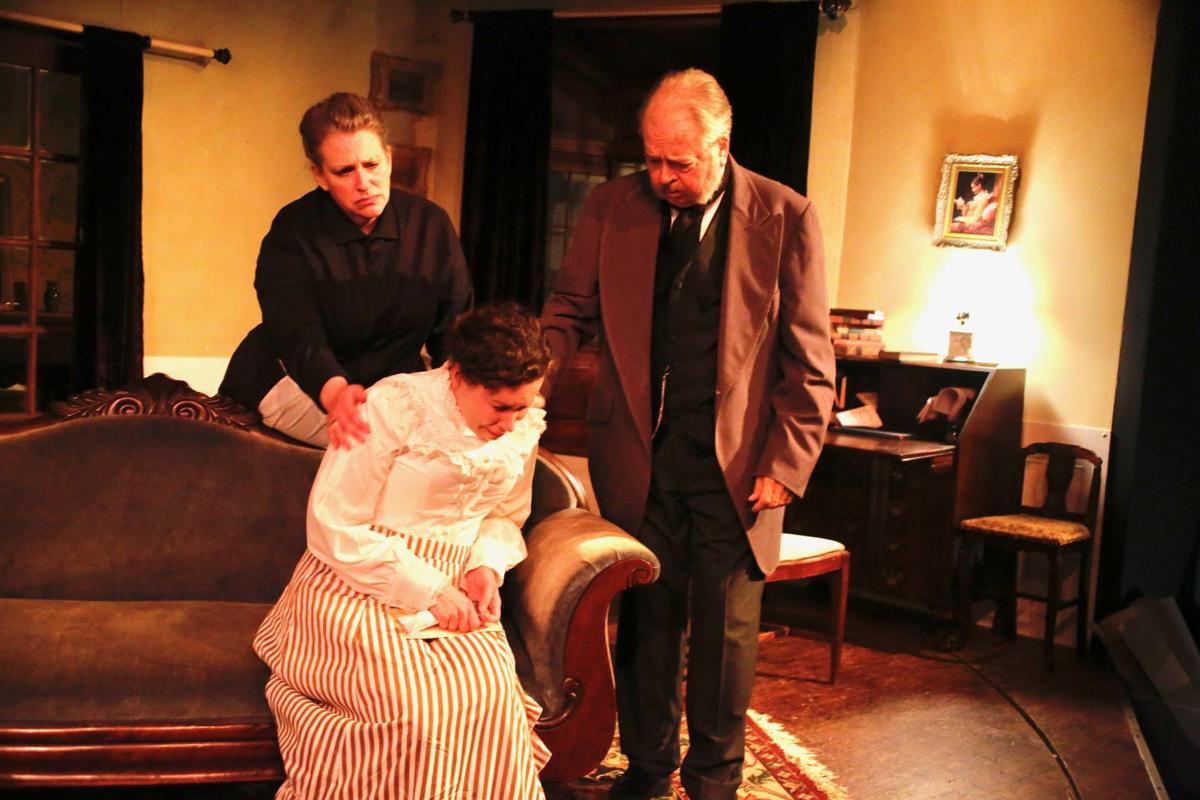 Elizabeth, played by Laura Hinkle, left, and Detective Rough (Larry Silvestro) console a weeping Bella Manningham (Leigh Deane) who is certain she will be committed to an insane asylum very soon. 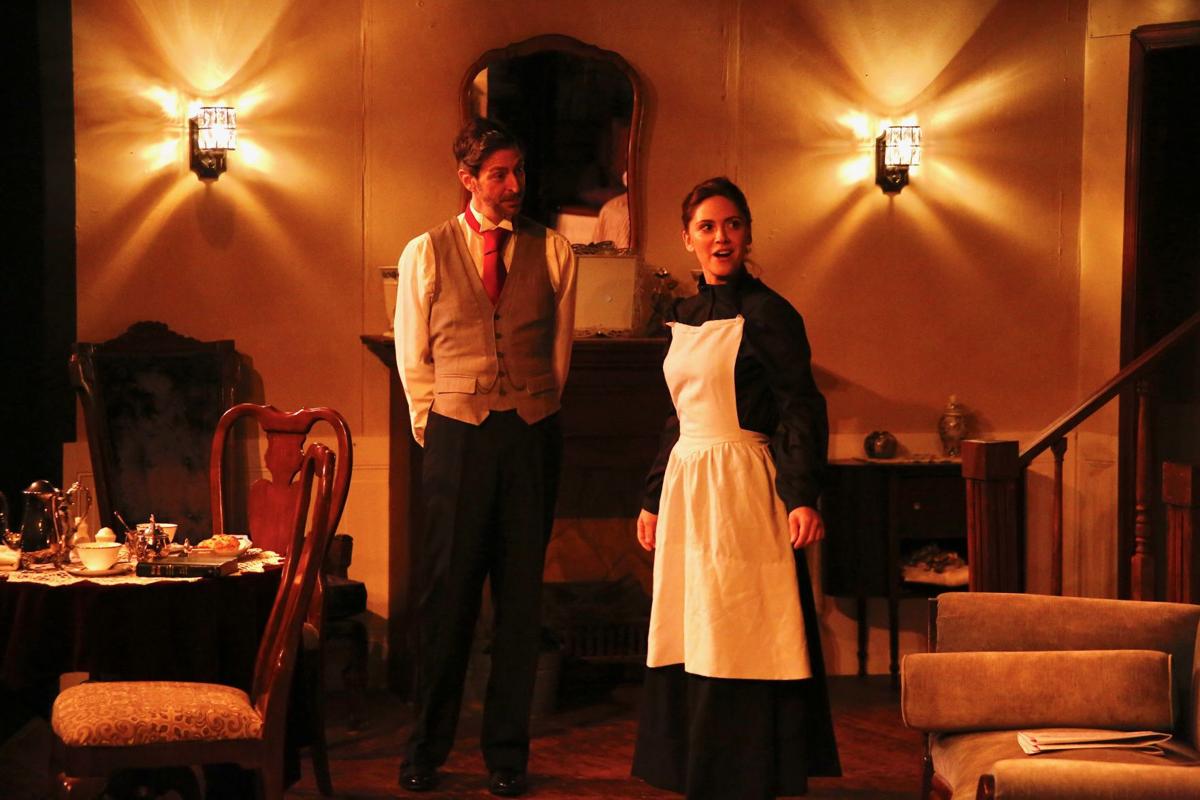 Elizabeth, played by Laura Hinkle, left, and Detective Rough (Larry Silvestro) console a weeping Bella Manningham (Leigh Deane) who is certain she will be committed to an insane asylum very soon.

As Halloween approaches, we prepare to take delight in a slew of horror movies. Filled with blood and gore, supernatural terrors and creatures popping up from under beds, these entertainments are as fun and silly as they are scary.

The Newtowne Players’ current production, Patrick Hamilton’s “Angel Street (Gaslight),” opening Friday, Sept. 27, contains no grisly carnage, no monsters, no sudden jolts of terror — and yet, this psychological thriller will quietly scare the bejeebies out of you.

Set in a dank, dreary London house in the Victorian era, “Angel Street (Gaslight)” tells the story of Bella Manningham, whose husband is relentlessly manipulating into believing she is going mad. Saving the quickly deteriorating Mrs. Manningham from this fate is the retired Detective Rough, who believes that Jack Manningham isn’t who he appears to be. As Rough enlists Mrs. Manningham’s help in doggedly pursuing a decade-old murder case, the terrified wife begins to trust her own instincts and strengths.

Of particular interest are the house’s gas lamps that reveal more clues than Mrs. Manningham imagined. In fact, both Mr. Manningham’s abuse and those lamps are what gave us the contemporary term “gaslighting” — intentionally and methodically deluding someone into questioning their sense of reality.

The Newtowne Players’ production immediately unsettles its audience in the first few moments of the play, performed in silence and near darkness around a sleeping Mr. Manningham. The set, designed by Adi Hendlin and decorated by Rosann Stamper, places us in a sitting room crowded with musty old furniture and all manner of Victorian ornamental decorations complete with oppressive curtains and disturbing nooks and crannies. As Mrs. Manningham creeps around the space, careful not to awaken her husband, we are put on alert, and our hearts don’t stop racing until the startling (and satisfying) climax. This play is one of quiet intensity and a huge payoff at the end.

Regina Richardson’s evocative lighting heightens this tension. Indeed, the most riveting moments occur when characters turn on and off the gas lamps, or when we see their power waxing and waning, seemingly on their own.

As Mr. Manningham, actor Shawn Davidson is catlike and sinuous, his eyes always tracking his prey (even from the mirror), ever watchful and ready to pounce at any moment. His vocal delivery is sonorous and elongated, almost vampire-like at times. Davidson’s task of preparing to play such an unlikable character was daunting.

“I’ll be blunt,” he said. “I hate Jack Manningham. He is everything that no man should be. So my connection to him is my loathing of him. The real fully human part of me deplores the viper he is. Jack takes me to a very dark place and it’s a place that is difficult for me. Not because of his darkness, but because of my light. I choose to be a positive influence in the world, so getting into Jack is like turning myself inside out. On the upside, I like his wardrobe.”

Newcomer Leigh Deane steps into the role of Mrs. Manningham and conjures up the image of a terrified rabbit. She is in turn beseeching and aching to please, possessing a childlike innocence combined with a world-weariness.

Deane approached character exploration with gusto: “I have delved into several different books and television shows about the Victorian period. I have a much better appreciation for how women were treated at the time — Mrs. Manningham would not have had anything in her own name. She is truly at the mercy of her husband. I have read articles about gaslighting and emotional abuse and talked at length with several mental health providers about the effects and behaviors involved. Having the play set in London is also an excuse to watch all of the English television that I love.”

NTP veteran Larry Silvestro’s Detective Rough is observant and determined, with a dash of self-aware humor. Laura Hinkle’s servant Elizabeth is maternal, caring, attentive, and gentle. Mallory Turvey-Manborne as the cunning servant Nancy is coy and sexy, at heart still just a girl in a woman’s body.

Rounding out the cast in cameo appearances are Chris Maulden and Luke Rowe playing the police officers.

The entire ensemble works beautifully together, the tension crackling among them even when they don’t say a word.

“Angel Street (Gaslight)” plays at the Three Notch Theatre for three weekends, Sept. 27 to Oct. 13, with Thursday, Friday and Saturday performances at 8 p.m. and Sunday matinees at 3:30 pm. Tickets are available at The Newtowne Players website at www.ntpshows.org or by calling 301-737-5447.

As playwright Patrick Hamilton states in the introduction to another one of his works, “If I have succeeded [in making your flesh creep], you will leave the theatre braced and recreated which is what you go to the theatre for.”

Director Wade Thompson takes Hamilton’s words to heart and has conceived and created a slow burn of a production, one that will get under your skin more intensely than any slasher movie can.

Written by Michelle Ebert Freire of The Newtowne Players.

Written by Michelle Ebert Freire of The Newtowne Players.