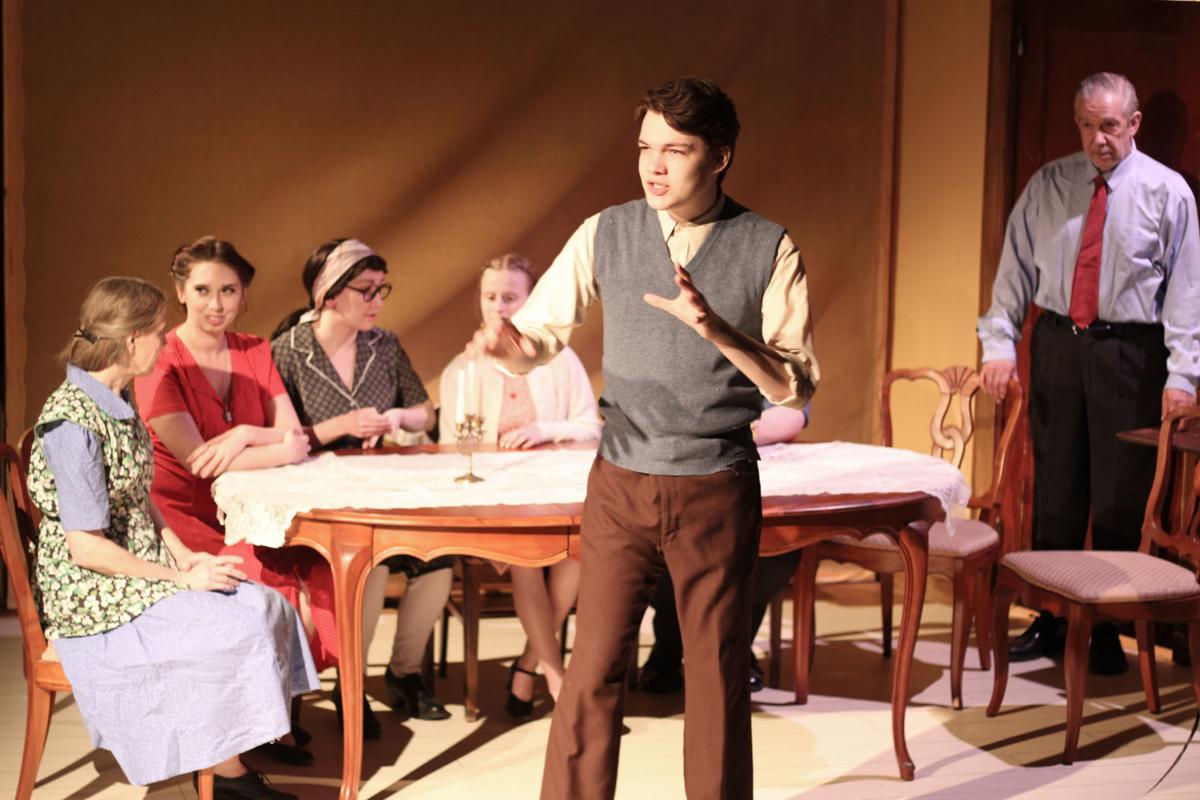 Before taking his own seat at the dinner table, Eugene Jerome, played by Grady Heveron, takes a moment to set the scene for the audience in The Newtowne Players’ production of “Brighton Beach Memoirs.” 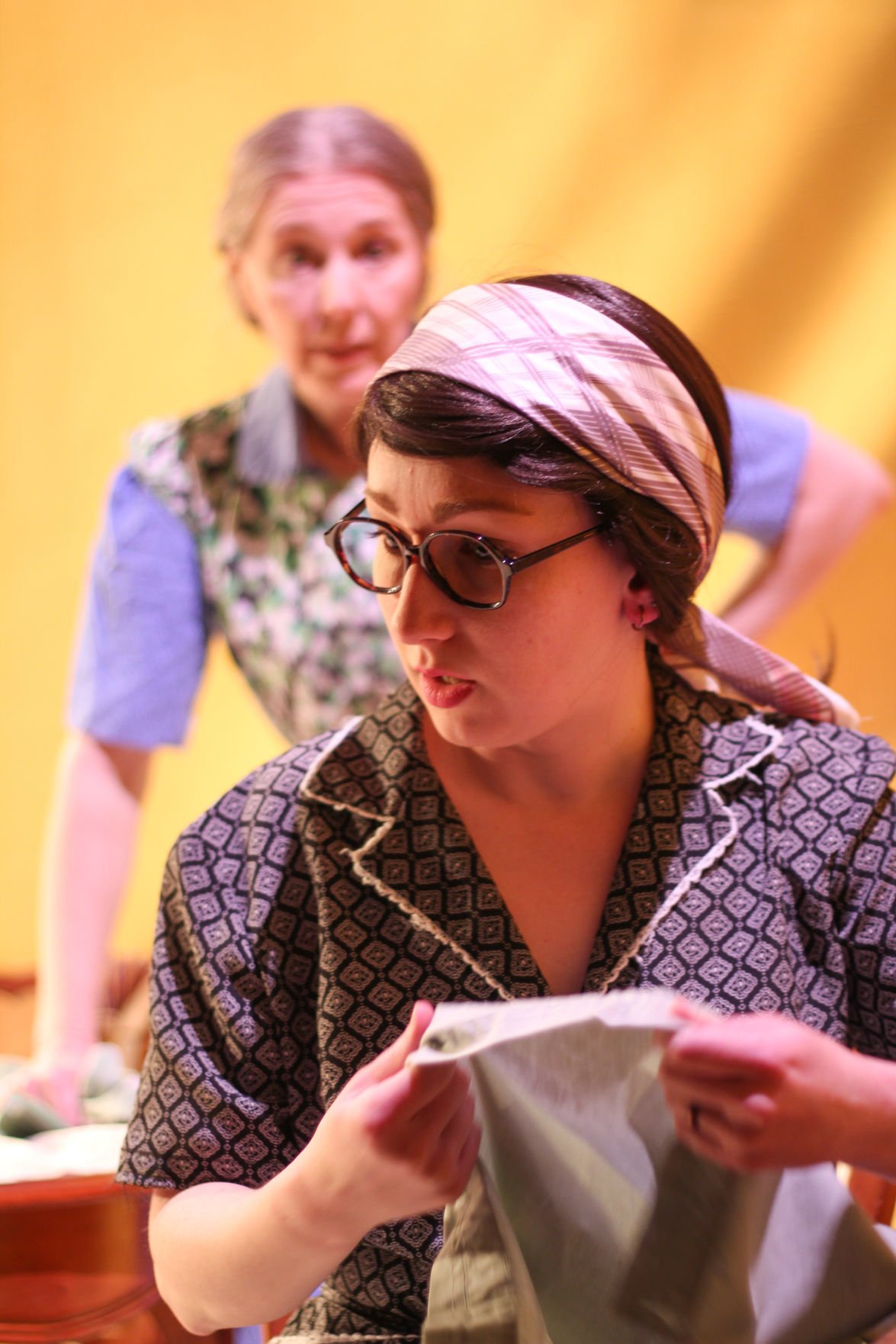 Blanche, played by Aubrey Joyce, foreground, who has been hard at work sewing, listens as Kate Jerome, played by Jeanne Louise, has a moment of sisterly concern in “Brighton Beach Memoirs.” 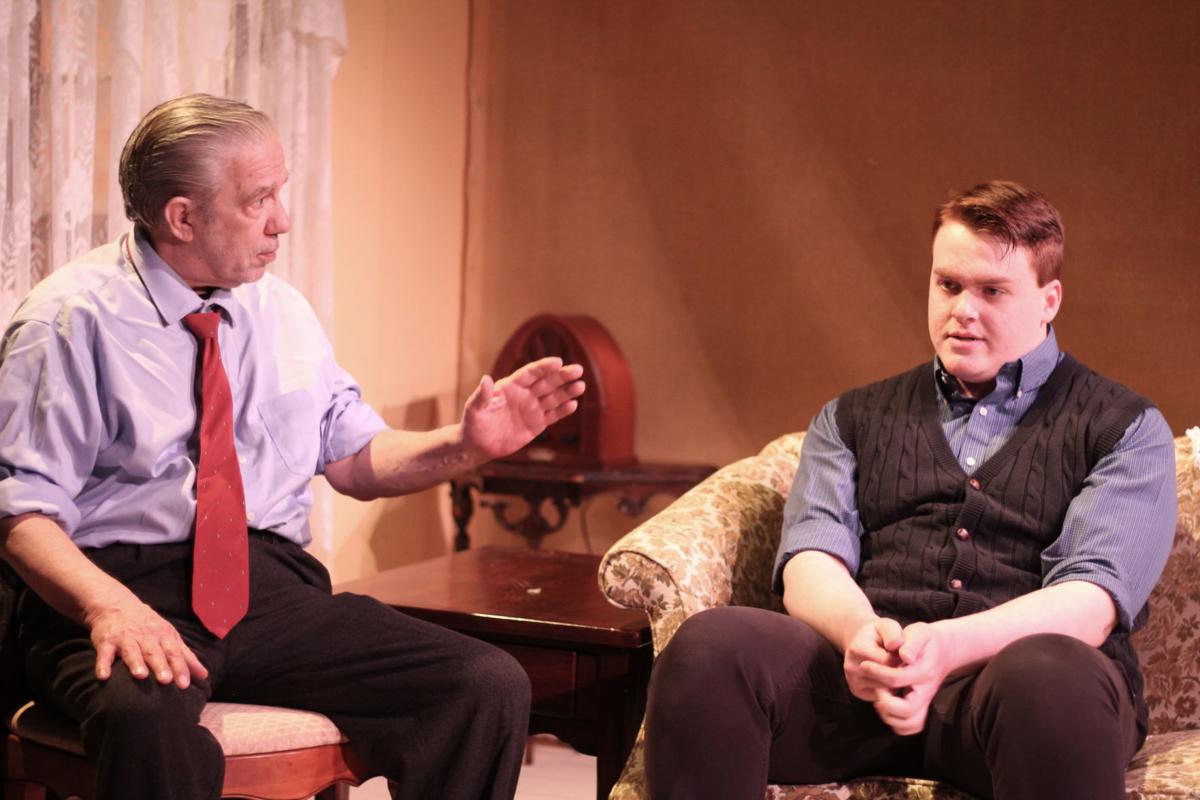 After Stanley, played by Luke Rowe, right, tells his father Jack (Randy Tusing) about his lost job, the two enjoy a teachable moment where Jack can explain that what Stanley has done is wrong but still show pride in him sticking to his principles.

Before taking his own seat at the dinner table, Eugene Jerome, played by Grady Heveron, takes a moment to set the scene for the audience in The Newtowne Players’ production of “Brighton Beach Memoirs.”

Blanche, played by Aubrey Joyce, foreground, who has been hard at work sewing, listens as Kate Jerome, played by Jeanne Louise, has a moment of sisterly concern in “Brighton Beach Memoirs.”

After Stanley, played by Luke Rowe, right, tells his father Jack (Randy Tusing) about his lost job, the two enjoy a teachable moment where Jack can explain that what Stanley has done is wrong but still show pride in him sticking to his principles.

Dinnertime in the Jerome household might feel remarkably like dinner with your own family — everyone loudly vying to share their news of the day, a teenager that storms out of the room, and at least one kid hiding their liver under the mashed potatoes. The Newtowne Players’ current production of “Brighton Beach Memoirs,” which runs March 29 through April 14, is hilarious and poignant, and definitely rings familiar.

We witness it all through the eyes of wisecracking 15-year-old Eugene Morris Jerome — aspiring writer, lover of baseball and newly minted pretty girl enthusiast.

Neil Simon’s semi-autobiographical play takes place in 1937, in a Brooklyn neighborhood heavily populated by immigrants. The Jerome children are first-generation Americans with typical teenage concerns. But trouble is brewing in Europe, especially for Jews, and the specter of additional family members showing up at the Jerome’s doorstep pervades even the most mundane aspects of their lives.

The one constant is the closeness of the family. These folks show their love for each other in ways that only a tight-knit clan can. Cousin Laurie gleefully ribs her older sister Nora about not being too bright. Older brother Stanley gives Eugene some cringe-worthy advice about the female anatomy. Matriarch Kate tries, naggingly so, to instill confidence in her younger sister Blanche.

No matter how cramped their quarters are or how hard it is to stretch a dollar to get food on the table, this sense of devotion clearly extends to family from afar.

“You’ll notice that seemingly everyone in the Jerome family has some problem that’s related to money, and ultimately, the solution to everyone’s problems comes in the form of family — the wisdom that a spouse provides, the love that a parent provides, the camaraderie of a sibling,” Christopher Joyce, the show’s director, said. “And within the play there’s a sense of the larger family — the family of the world. It doesn’t matter what country you’re born in, everyone is your neighbor – and that’s a lovely sentiment. I hope that audience members will see the boundless empathy of the Jerome family and maybe take it to heart.”

Returning audience members may be surprised to see the interior of a two-story house on NTP’s very low-ceilinged stage. Scenic designer Steve Pugh has ingeniously created a set in which the entire playing space — inside, outside, upstairs and downstairs — is onstage at all times.

Lighting designer Jay McKulka has created area lighting that illuminates the upstairs bedrooms from behind sheer fabric; when the lights are down, the bedrooms are no longer visible. Adding authenticity are the hardwood floors painted by Linda Sanborn, plus period props gathered and crafted by Rosann Stamper, Stephanie Taubert and Wade Thompson. Kristina Faison’s historically accurate costumes also highlight the traits of each character.

Finding a way to portray the hilarious as well as the darker aspects of each character with respect and consistency demands top-notch acting, and the cast for this production rises to the challenge.

On playing Eugene, 18-year-old Grady Heveron said, “I found it fairly easy to connect with Eugene because I was a 15 year-old boy only a few years ago. I found the humor very easy to connect to because I am very sarcastic and Eugene is a little sarcastic sass monster. But Eugene also has deeper feelings too. And those can be difficult to understand, but I just have to try and remember what it was like to be 15 and discovering more adult feelings. Overall I love this show and I love portraying Eugene. He’s one of the characters that I have played that I feel especially close to.”

Newtowne Players veteran Aubrey Joyce returns to the stage as Blanche, Eugene’s overwhelmed widow aunt who, along with her two daughters, lives in the Jerome household, financially dependent on her older sister and her sister’s husband.

“Seeing where Blanche missteps or comes up short and being able to ‘live’ the scenarios in small, controlled bursts has been extremely cathartic for me,” Aubrey Joyce said. “Blanche has been a blessing, and I’m truly thankful for the opportunity to be a part of this production.”

The cast also includes Luke Rowe as Stanley, Sarah Pollard as Nora, and Sara Brock as Laurie. Southern Maryland acting favorites Jeanne Louise and Randy Tusing round out the cast as the parents, Kate and Jack Jerome, both bringing a wry wisdom to their characters. Tim Joyce stage-manages, and Kenny Faison assistant directs.

“Brighton” will elicit knowing nods, perhaps a few tears, and definitely laughter. “The show has a lot of dramatic moments, which all end up being very emotionally satisfying. More importantly, you’ll bust a gut laughing,” the director said.

You might even feel compelled to call your mother. She knew all along that you weren’t eating that liver.

“Brighton Beach Memoirs” runs March 29 through April 14, with show times on Thursdays to Saturdays at 8 p.m. and Sunday matinees at 3:30 p.m. Tickets are available at The Newtowne Players website at www.ntpshows.org or by calling 301-737-5447.

Written by Michelle Ebert Freire of The Newtowne Players