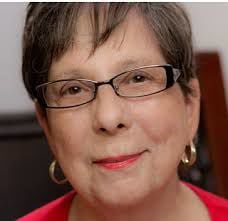 The Notable Maryland Author articles and associated Fun With Words writers’ prompts are the centerpiece of the program. Each month, The Enterprise and other newspapers in the state will feature a Maryland Writers’ Association article about an author. Marylanders are encouraged to read the articles and try their hand at the writing prompts each month.

“I get a huge energy transfusion by listening to poets read their works.” — Grace Cavalieri

Genre: Poetry — Poetry is a form of literature that evokes a concentrated imaginative awareness of experience or a specific emotional response through language chosen and arranged for its meaning, sound, and rhythm.

A partial reading list includes “Navy Wife,” “Sounds Like Something I Would Say,” “The Man Who Got Away,” “The Mandate of Heaven; Life Upon The Wicked Stage,” “With,” and “Other Voices, Other Lives.”

Grace Cavalieri, born in 1932, is an Italian American writer living in Annapolis. During her 43-year career as a poet and playwright she has published 24 books, produced 26 plays and hosted over 2,000 episodes of “The Poet and the Poem,” a radio show presented by the Library of Congress through National Public Radio. She is the author of numerous collections of poetry. Her talent has been recognized through awards that include the Corporation for Public Broadcasting Silver Medal, the Columbia Award from the Folger Shakespeare Library and the Allen Ginsberg Poetry Award.

A strong believer in higher education, Cavalieri has attended and graduated from New Jersey College at Trenton with a bachelor’s in education and Goddard University with a master’s in creative writing and education. She has also studied at the University of Maryland and Graduate School of Education, Rollins University, Orlando.

In December of 2018, Gov. Larry Hogan (R) appointed Grace Cavalieri as Maryland’s 10th poet laureate. The position, created by the Maryland General Assembly in 1959, has a four-year term. As poet laureate, Cavalieri is responsible to accompany the governor and provide readings at public events and receptions. She makes appearances and holds readings in schools, universities and libraries around the state. She presents lectures and poetry writing workshops as well as connects with literary organizations and festivals across the state. In this regard, she has teamed up with the Maryland Writers Association Poetry Contest as one of its judges. Finally, she writes new works to honor special occasions, venue openings and dedications.

“My emphasis is really state poetry and I’m ready to go, really,” she said. “I want this to be something where we can keep the excitement happening and post things everyone can be part of. I’m so glad to be given the energy for this new chapter of my life.”

Maryland Writers’ Association invites readers to have fun writing poetry using just 100 words. Pick or make up a special occasion, venue opening, or dedication and write a poem in honor of the event.

Readers can submit their responses at the website www.marylandwriters.org/Notable_Maryland_Authors by the 25th of the month to receive an MWA Writers’ Round Table submission certificate. Selected prompts will be published next month. Other information can be found at www.mwawritersroundtable.org.

In December, readers were asked to have fun being a food writer. Using just 100 words, the challenge was to pick a holiday and a holiday food and write about it, including its cultural context, a personal memory and a preparation tip.

Finding this in the fridge Christmas Day I was certain mom was thinking of me. A favorite — especially the homemade, nonalcoholic version. Eggnog can be traced as far back as nine-hundred years. It was mixed with expensive alcohol in the Middle Ages to preserve the milk and eggs. It arrived in the American colonies and became an everyday drink as milk and eggs were more common. We started attaching eggnog to the Christmas season in the late 1700s. When making, be sure to gently fold in the whipped egg whites for a light airy note to your drink.

Written by Teresa Ward of Hughesville.

While in elementary school an arborist visited our class bearing pine tree saplings that had their root clusters wrapped in wet paper towels. They were so delicate and when I was handed one, I felt a sudden sense of responsibility. This newborn tree’s life was now in my hands. My compassion drove me to rescue about a dozen other unwanted seedlings. Most of them didn’t make it, however, several still survive to this day. Thirty-five years ago, I was given an unexpected lesson on the fragility of life by a rather unassuming block on the calendar known as “Arbor Day.”

Written by Steve Baker of Hughesville.

Best brisket and the pig

It was the highest point of the road and of course it was called “El Boquerón.” Two old and dirty tables invited the customers to eat in their cars. Why would anyone stop there? Maybe the brisket?

The pig would beg for food, but he preferred beer. Late in the afternoon it would be so drunk that it would lay down anywhere, snoring like only a large, drunk pig could.

The brisket, which would cook for many hours, was delicious. The fat on the outside was crispy and the meat would melt in your mouth.

Written by Mario Salazar of Gaithersburg.

We siblings believed that my father’s side of our gene pool was the deeper end. My favorite cousin, Mike, is from my mother’s side ... the shallow end.

He’s an extremely deadly hunter, and if Mike can kill it, he will eat it. He’s “carnivoracious.”

Written by Jon Ketzner of Cumberland.