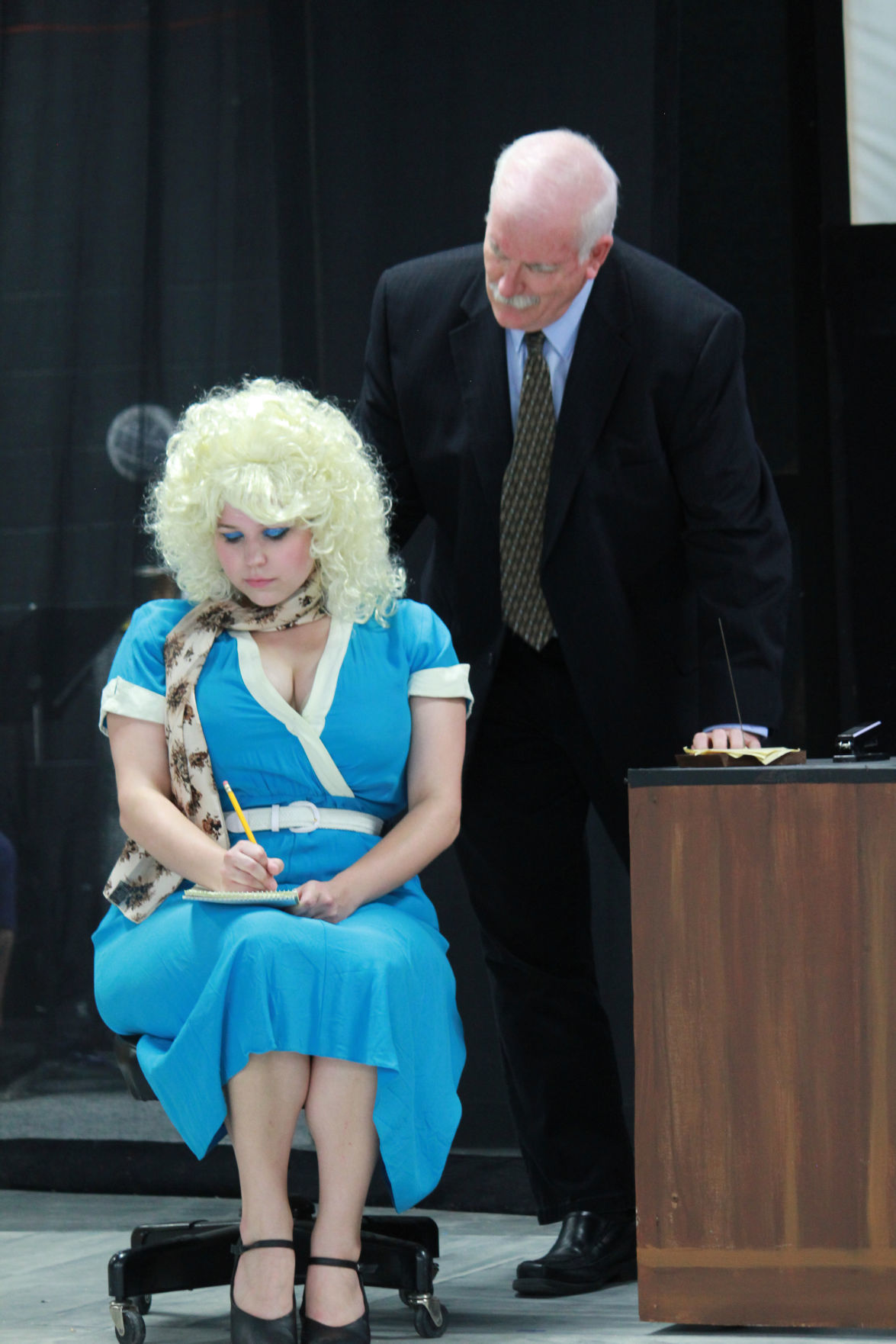 Franklin Hart, played by Greg Rumpf, gives attention and dictation to his favorite secretary, Doralee Rhodes, played by Emily Quade, in The Newtowne Players' production of "9 to 5, the Musical." 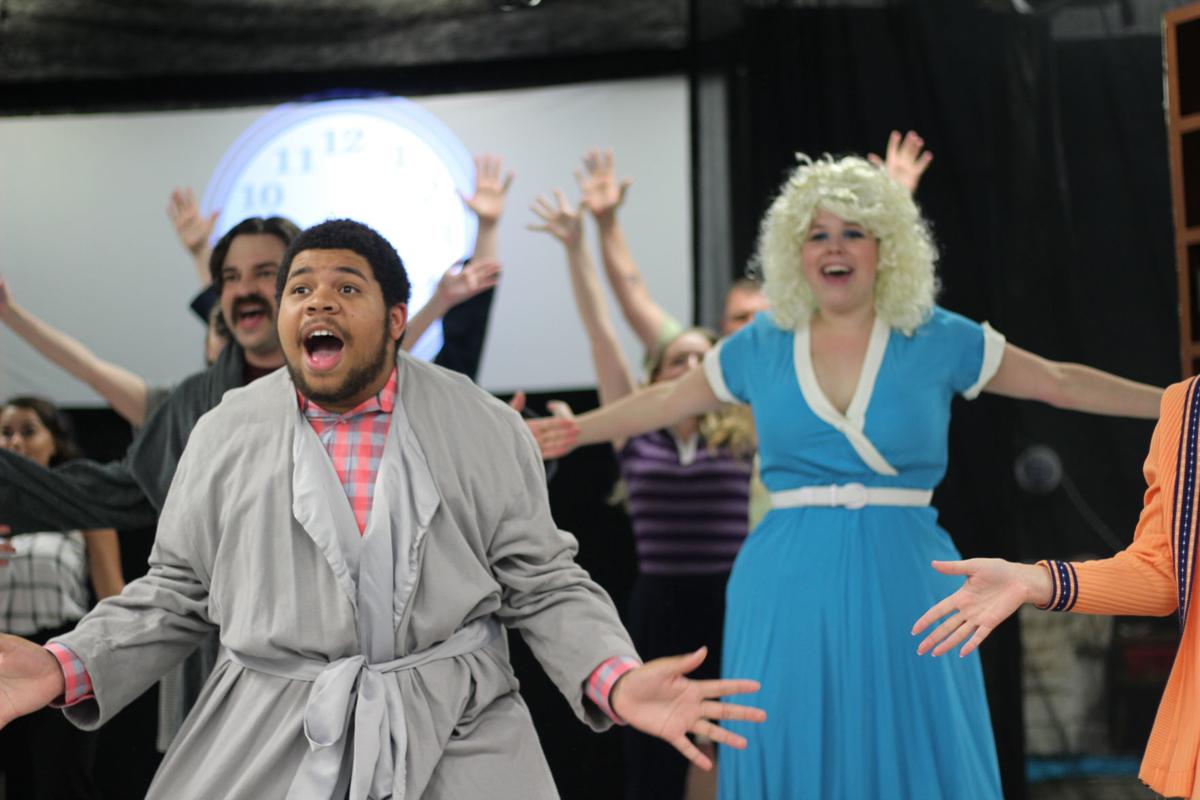 The energetic musical at Three Notch Theatre kicks off with the Dolly Parton classic “9 to 5” sung with enthusiasm by the cast, including Kevin Bongiovanni, Kenneth Faison and Emily Quade. 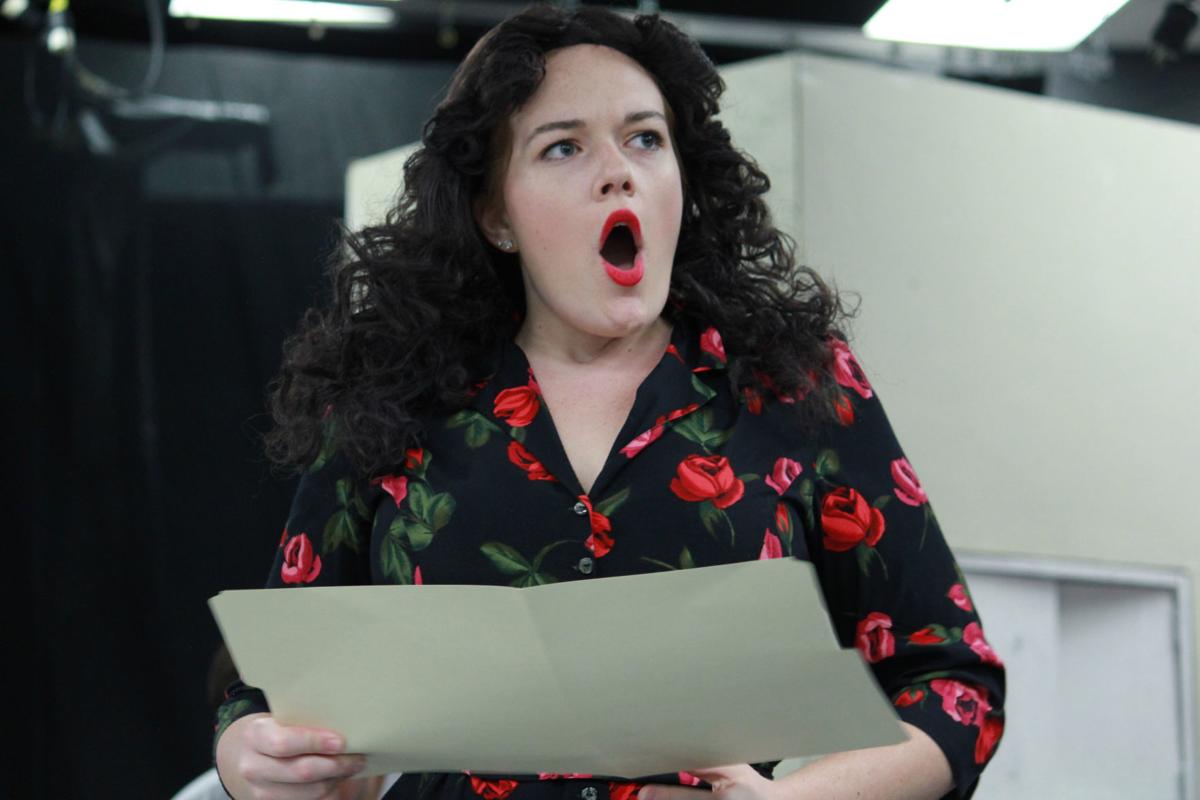 Trinity Helm, playing character Maria Delgado in The Newtowne Players' production of "9 to 5, the Musical," makes a startling discovery about being a woman and working for Consolidated Industries.

Franklin Hart, played by Greg Rumpf, gives attention and dictation to his favorite secretary, Doralee Rhodes, played by Emily Quade, in The Newtowne Players' production of "9 to 5, the Musical."

The energetic musical at Three Notch Theatre kicks off with the Dolly Parton classic “9 to 5” sung with enthusiasm by the cast, including Kevin Bongiovanni, Kenneth Faison and Emily Quade.

Trinity Helm, playing character Maria Delgado in The Newtowne Players' production of "9 to 5, the Musical," makes a startling discovery about being a woman and working for Consolidated Industries.

When entering the Three Notch Theatre these days, the air is electric. And it’s not solely due to the newly installed central air conditioning system. The energy and excitement of the cast and crew of The Newtowne Players’ production of “9 to 5, the Musical” is infectious.

“9 to 5,” by Dolly Parton and Patricia Resnick, is based on the 1980 movie starring Parton, Lily Tomlin and Jane Fonda. A movie which, at 12 years old, local theater director Michelle Freire stumbled upon.

Freire notes that the musical boils down to a light-hearted comedy set in the 1970s about women getting even with their sexist boss. But as a director, she can’t ignore the fact that some of the plot’s overarching themes are still surprisingly relevant today. “9 to 5” uses comedy and music to shine a light upon some of the political and social issues which continue to bubble to the surface every day. “We kill flies with honey instead of vinegar here,” she said.

For all the Parton fans out there, the show opens with the real thing. Dolly, charming as ever, leads the audience through the introductions of the three women who carry the show. Violet, played by Stacey Park, is a widowed mother of a teenage boy, vying for a promotion at the company she’s been with for years. Doralee, played by Emily Quade, is sexy, sweet and adored by her boss, Franklin Hart, CEO of the company. Judy, played by Lindsey Norris, is new to the company and going through a divorce.

As the employees of Consolidated Industries begin their work day, we hear that familiar tune of “9 to 5”. The day continues as the secretaries teach Judy a thing or two about working for the company, and especially for Hart, played by Greg Rumpf. He’s the boss you love to hate. With a vocabulary that all-too-often includes “my girls” and “honey,” Rumpf’s portrayal is dripping with oily masculinity. As a refreshing foil, Hart’s administrative assistant, Roz, played by Megan Rankin, is a hilarious over-the-top goodie-two-shoes who loves her boss and everything he does. And sings about it, too.

As the show progresses with song and dance, the ensemble takes advantage of every opportunity to impress. With standout performances from Kevin Bongiovanni, Emily Johnson, Aubrey Joyce, Rebecca Masters and Stephanie Taubert, the ensemble members really bring to life the daily grind of office life in the seventies. Accompanied by energetic choreography from Richard Lepper and musical direction by Diane Trautman, the cast is radiant.

There’s never a boring moment in the show as the three protagonists begin to plot the many ways that they could put an end to Hart’s tyranny, and indeed his life. Through a series of entertaining Scooby-Doo-like miscommunications and mishaps, the women end up with a CEO tied up and at their mercy.

And what happens next? Stick with these quirky characters to enjoy an empowering end to an enjoyable musical comedy. If you don’t know what’s coming, you’re in for a treat.

The costumes and wigs, designed and curated by the team of Joanne Fuesel and Kristina Faison, are reminiscent of that glorious age of big lapels and disco glam. The 1970s saw the introduction of the pantsuit, the bright colors of the Peacock Revolution and the big Farrah Fawcett hair styles, which lend well to the stage and breathe life into the characters. A special shout out goes to Chris Maulden’s extraordinary mustache and mullet.

The ingenious set construction was conceived by designer Victor Hensley, working closely with Freire, the director of the show.

“It’s a set-heavy show,” Freire said. “It could have the tendency to be clunky.” So, to avoid long scene changes, the directorial team devised clever ways to repurpose and reimagine furniture, walls and doors, and each cast member pitches in to change the scenery with speed and precision.

“9 to 5, the Musical” entertains audiences July 6 through July 29 at the Three Notch Theatre, located at 21744 South Coral Drive in Lexington Park. Thursday, Friday and Saturday performances are at 8 p.m., and Sunday performances are at 3:30 p.m. Tickets cost $18, or $15 for seniors, students and military, or $13 for children. Thursday performances are $13 for all patrons. For tickets, visit www.newtowneplayers.org or call 301-737-5447 to make a reservation.

Kristin Kauffman of The Newtowne Players