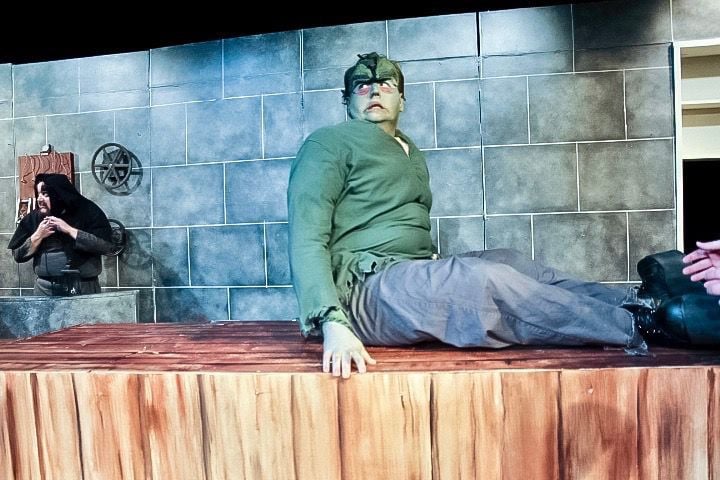 The Monster, played by Chris Joyce, is alive, any a little confused about where he is and why in The Newtowne Players’ production of “Young Frankenstein.” 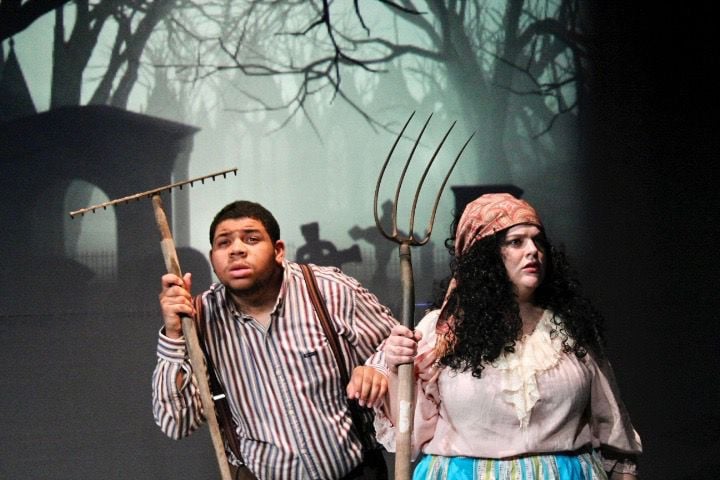 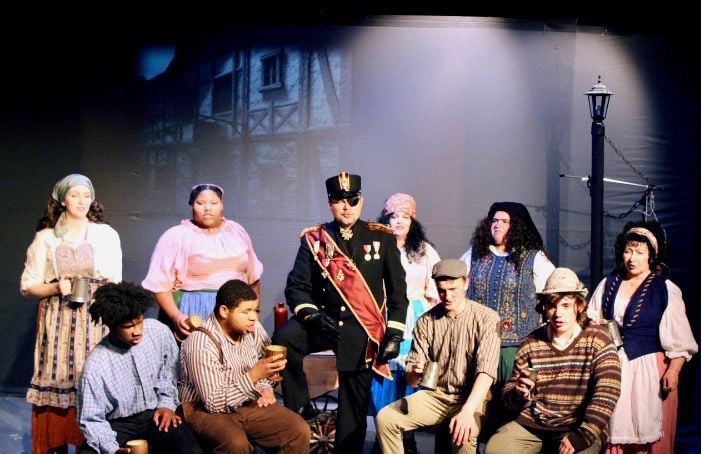 Inspector Kemp, played by Jeff Maher, center, discusses the perils of having a Frankenstein actually living in Frankenstein castle with the villagers.

The Monster, played by Chris Joyce, is alive, any a little confused about where he is and why in The Newtowne Players’ production of “Young Frankenstein.”

Inspector Kemp, played by Jeff Maher, center, discusses the perils of having a Frankenstein actually living in Frankenstein castle with the villagers.

Playgoers can treat themselves this Halloween season to a show that shines more than scares. “Young Frankenstein,” presented by The Newtowne Players, runs today through Oct. 15 at Three Notch Theatre in Lexington Park.

Velcome to Mel Brooks’ Transylvania, where the men have shifting humpbacks, (some of) the women evoke spooked whinnies from horses near and far, and the basements are full of suitably mysterious lab equipment.

Frederick Frankenstein, played by Jonathan Berry, dean of anatomy at Johns, Miriam and Anthony Hopkins School of Medicine in New York, travels across the globe to Transylvania after learning he has inherited his grandfather’s castle, according to a release from the theater company. While he’s initially not too big on the family name or its infamous history — he pronounces his last name “Fronkensteen” to help distinguish himself — he soon comes around after having a dream in the castle about his family. He decides to bring back to life a large corpse with the brain of a scholar, using his mad scientist grandfather’s notebooks on how to reanimate the dead.

To help him in his quest, Frederick employs Igor, played in appropriately lumbering fashion by Paul Rose, and Inga (Kristin Kauffman), the beguiling, yodeling lab assistant who opens Frederick’s eyes to the deeper joys of, um, science, with high-spirited enthusiasm and a voice to match. The dark and formidable Frau Blucher, played by Stacy Oosterink, rounds out the castle lineup. She’s full of secrets, too, until she gleefully reveals one about her salacious relationship with Frederick’s grandfather.

Unfortunately, plans go awry when Igor procures an “Abbie Normal” brain, instead of the intellectual one Frederick wanted, and the grunting, hulking Monster, played by Christopher Joyce, after being brought to life successfully, escapes the castle.

The local villagers are, understandably, upset. Leading the charge against Frederick and the Monster is the sternly serious Inspector Hans Kemp (Jeff Maher), who takes Frederick to the gallows after believing the Monster has killed Frederick’s frigid fiancée, Elizabeth (Sophie Campbell). Elizabeth, who has followed Frederick all the way from New York, gets caught in the blossoming love triangle between Frederick and Inga, and Campbell pouts her way expertly through Elizabeth’s distress.

Does Frederick survive? What will happen to the Monster? And why doesn’t Igor ever notice his hump? Find out during this comedic romp that is fairly close to the 1974 film of the same name. Standouts include Harold the Hermit’s (Mike Sokoloff) bumbling encounter with the Monster and, later, the famous, glittering Irving Berlin song, “Puttin’ on the Ritz,” featuring tap dancing, top hats and Joyce’s hilarious, deadpan vocalizations.

This show has an “R” rating and is not appropriate for children. Performances are Thursdays through Saturdays at 8 p.m., with Sunday matinees at 3:30 p.m. Tickets are $18 for adults, $15 for military/senior/student attendees, or $13 for Thursday shows. For tickets, call 301-737-5447 or visit www.newtowneplayers.org.