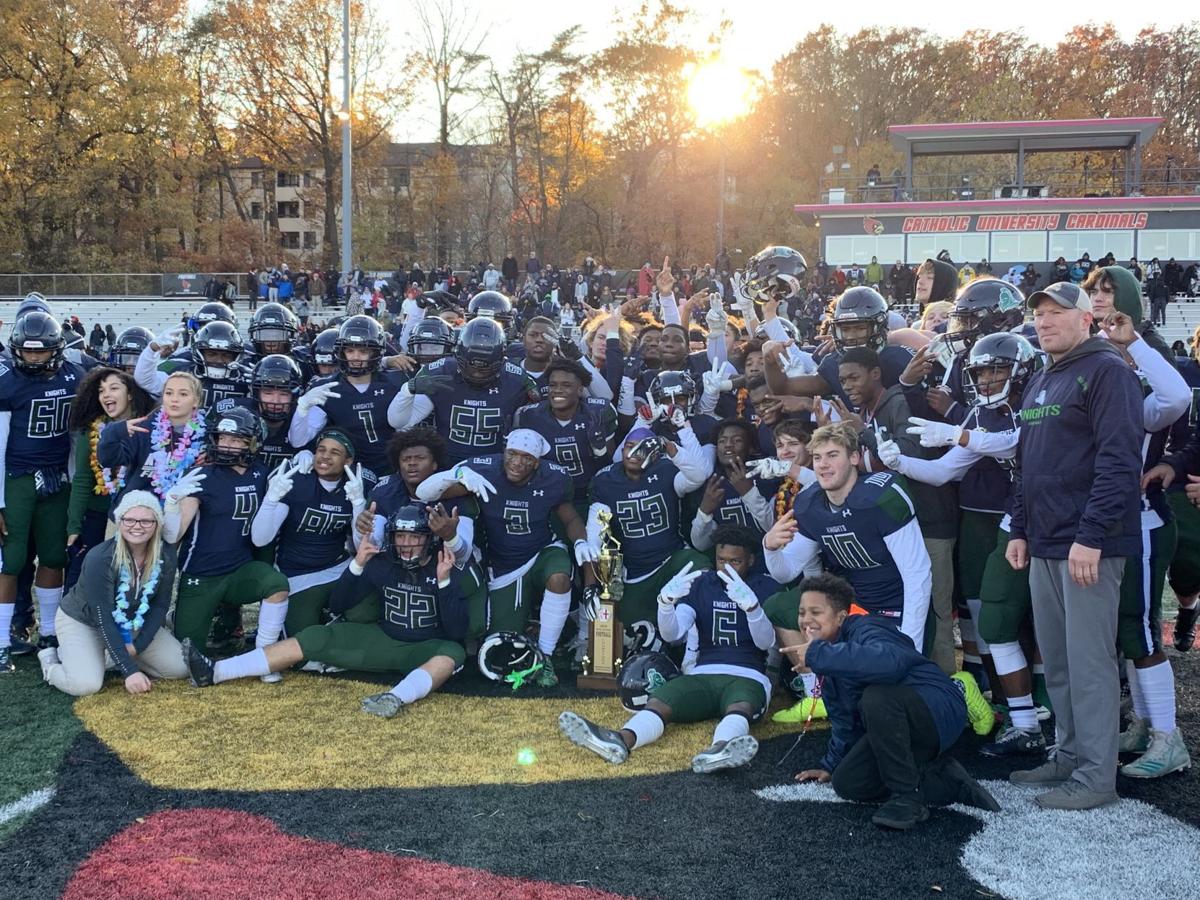 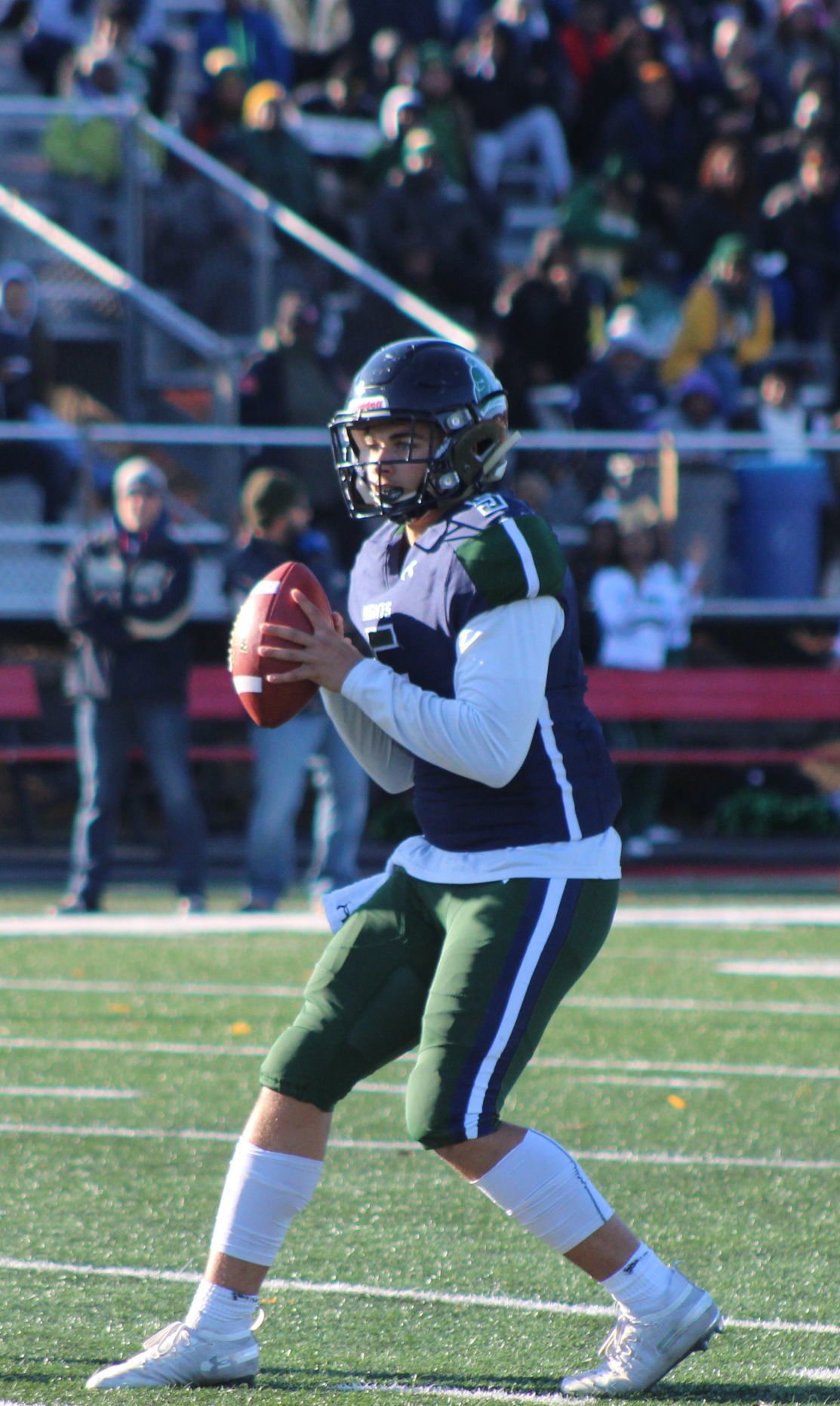 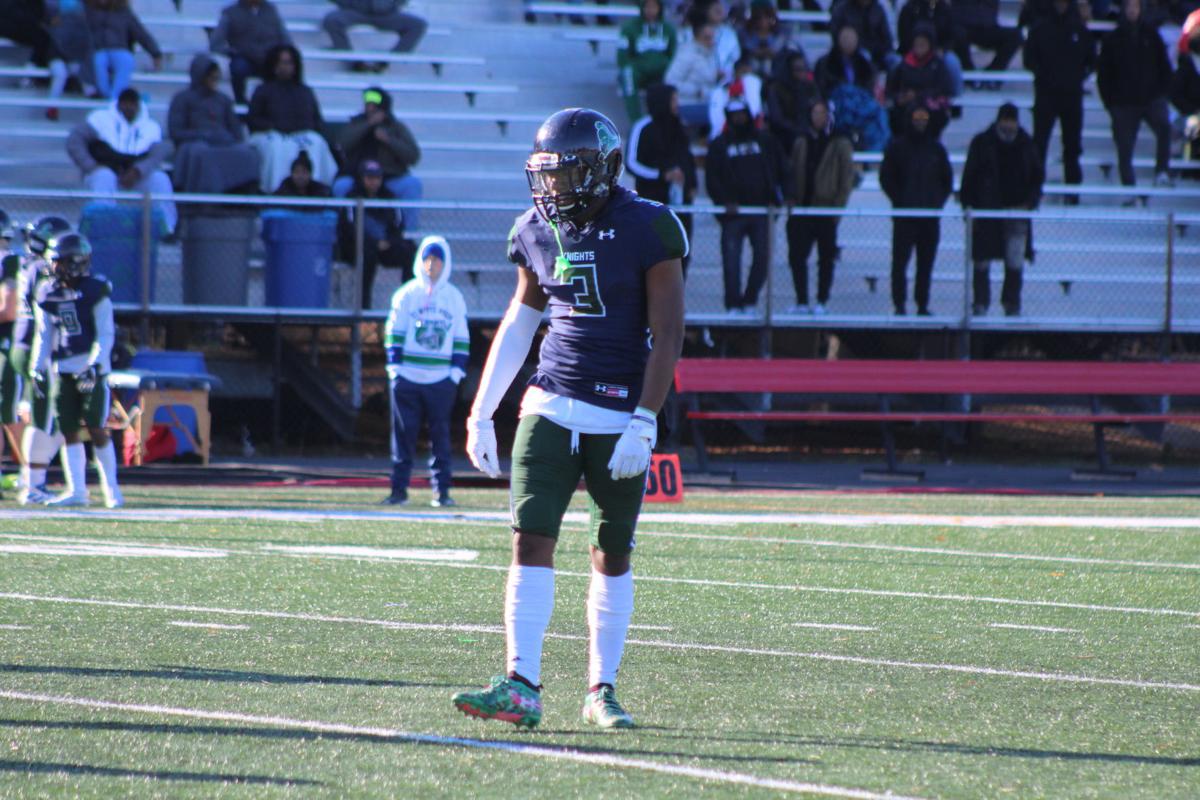 WASHINGTON, D.C. — Just about everything that could have gone wrong for St. Mary’s Ryken versus the Archbishop Carroll Lions in the first half of Sunday’s Washington Catholic Athletic Conference Metro Division championship game did for the Knights.

“At halftime I told our guys that we had done about everything wrong we could have done wrong, so the second half has to be better,” St. Mary’s Ryken head coach Aaron Brady said.

Trailing 14-0 after a quarter, the Knights got a stop on defense after junior quarterback Trev Nored threw an interception with St. Mary’s Ryken driving just outside of the red zone early in the second quarter.

“The big point in the game was [Archbishop Carroll’s] interception return, and our defense got a four-play stop,” Brady said.

The Knights were able to use that stop on defense early in the second quarter to begin to turn the game in their favor and scored 17 unanswered points to earn a 17-14 win at Catholic University to earn the program’s second consecutive Metro Division title.

“This was a great team win,” Brady said. “Our kids hung in there, and I was just proud of them for that.”

Carroll (8-4 overall) got on the scoreboard first with a 4-yard touchdown run by senior Lorenzo Green with 2 minutes 16 seconds left in the opening quarter to lead 8-0 after senior quarterback Jordan Harris connected with junior Leron Husbands for the two-point conversion.

Late in the first quarter, the Lions added to their lead with a defensive touchdown after Nored was sacked and fumbled the ball which was recovered by Carroll sophomore Shon Reid in the end zone, putting the Lions up 14-0 with under a minute left in the opening frame.

“It was a little ugly at first,” Nored said. “We got down 14-0, but we kept our composure, kept going, never quit and came back to win the game. It was awesome.”

St. Mary’s Ryken (9-3) got on the scoreboard with 2:58 to go until the half on a blocked punt by sophomore Zaire Carter that he returned into the end zone for the Knights’ first points of the championship contest to trim the deficit in half.

“One of our mantras is about how to handle sudden change and adversity,” Brady said. “Luckily, we talked about it before the game. We knew we were going to have some adversity, but we didn’t think we’d have that much.”

Trailing 14-7 at the half, Brady encouraged his team to embrace the close contest they were in and was hopeful the second half would be different for his guys.

“At halftime I said, ‘Would you rather be in a blowout game or one where we have to freaking battle?’” Brady said. “Our kids battled today.”

In the second half, the Knights tied the game on a 1-yard touchdown pass from Nored to senior Aiden Weber with 2:07 left in the third quarter.

“I am happy for the seniors, and I give a lot of credit to Carroll,” Brady said. “They played really well, and put pressure on us. They made us do some things, but I am just happy we won for our seniors.”

With 2:07 left in the game the Lions possessed the ball at their own 24-yard line trailing by three points, but the Knights defense was able to force Carroll to turn the ball over on downs and Nored took two kneel downs to seal the victory for St. Mary’s Ryken.

Nored completed 11 of 27 passes for 115 yards to go along with one touchdown and one interception. Junior Jamaree Bowman led the Knights on the ground with 17 carries for 56 yards and had a game-high 61 receiving yards. Weber rushed for 40 yards on 10 touches.

“It means everything to go back to back,” Nored said. “All the hard work that we’ve put in since December paid off today, and we got another championship.”

Knights junior Will Johnson was named the 2019 Defensive Player of the Year for the WCAC Metro Conference.

“We had eight seniors in the program, so the sky’s the limit for us again next year,” Brady said. “We are going to have a great offseason and a great schedule next year.”