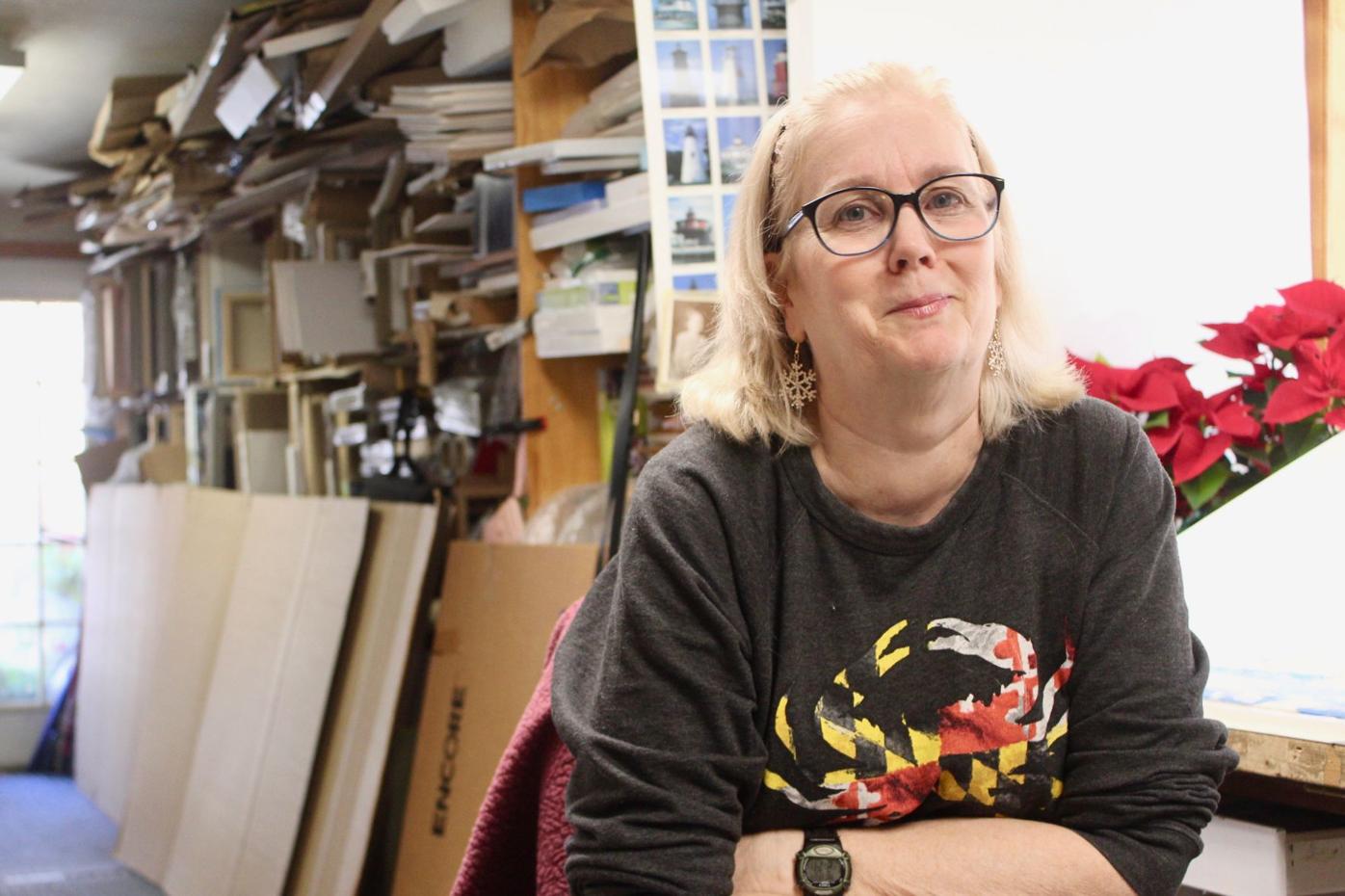 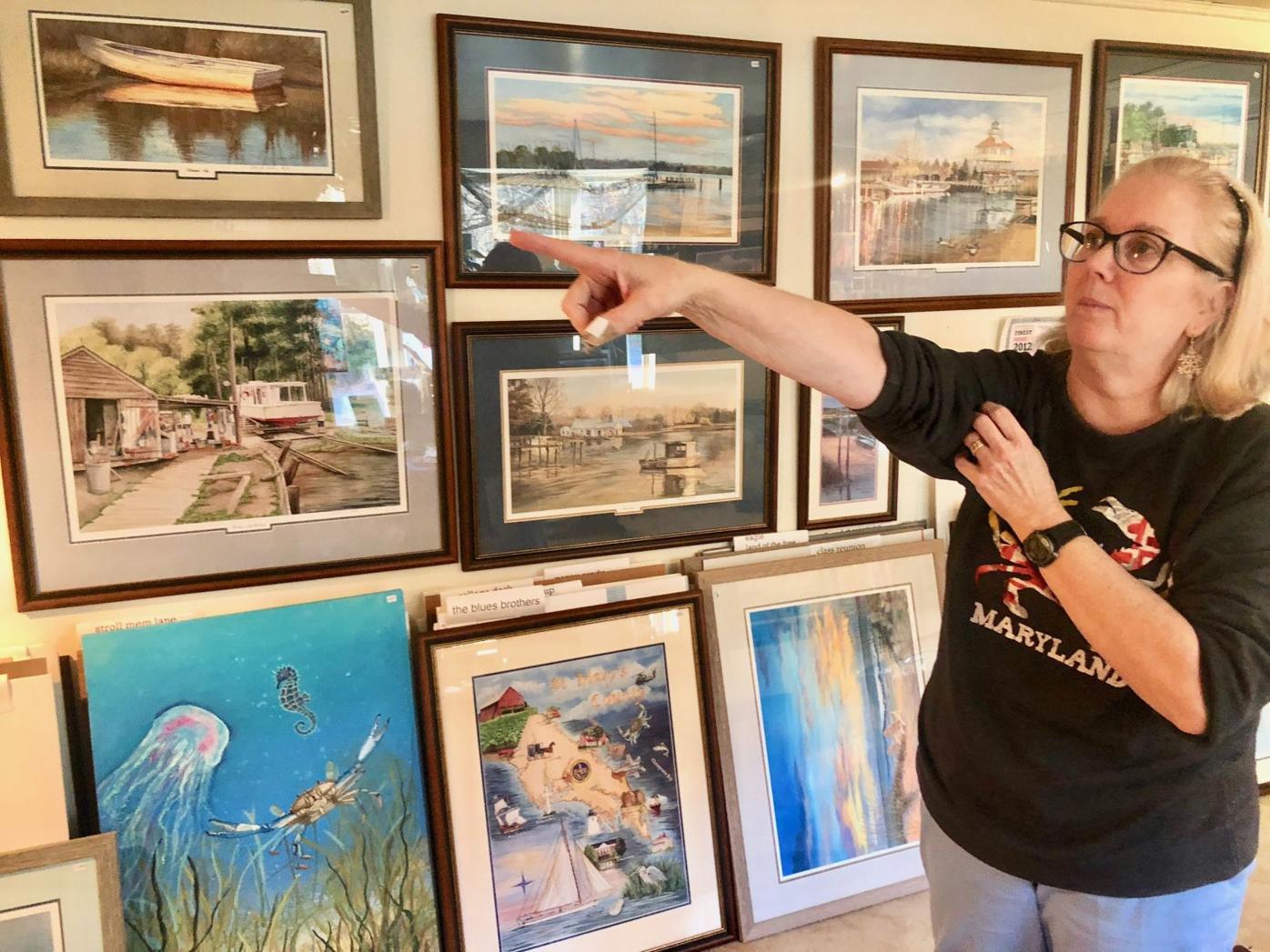 Local artist Mary Lou Troutman points out one of her pieces in her Dameron studio, in front of a wall of her acrylic paintings.

Local artist Mary Lou Troutman points out one of her pieces in her Dameron studio, in front of a wall of her acrylic paintings.

In a quiet Dameron cul-de-sac on a Sunday morning, Mary Lou Troutman cleans her studio while her husband, Jeff Troutman, cuts matting to frame her pieces.

Nestled on the edge of a towering forest, away from the clamor of shopping centers, sirens and base traffic, Mary Lou is just where she wants to be — secluded in nature, capturing the history and beauty of Southern Maryland through her paintings, celebrated throughout the region.

This year is no different than past years. From September to December, the artist and her partner work “24 hours a day, seven days a week” to produce art for Jeff to sell at various seafood and art festivals, Mary Lou said. This is her busiest season.

Jeff exhibits his wife’s work in towns around the Chesapeake Bay “almost every weekend” year-round, he said. Other than the garden flags Mary Lou designs, selling her fine art at festivals and stores throughout the county is the couple’s main source of income.

“That’s how we survive, is the art shows,” Jeff said.

This year, inclement weather kept the Troutmans from selling at five shows, costing them their deposits for booth space and any revenue from the unsold artwork.

“I jokingly say I wouldn’t want my worst enemy to do what we’re doing, because it’s hard work and there’s not a lot of money involved in it,” Mary Lou said.

Having grown up in Dameron, Mary Lou, 61, considers herself a “down home country girl.”

She remembers fishing and crabbing as a young girl on St. Jerome Creek, and recalls a time when watermen and their harvests were plentiful, when it wasn’t uncommon to see skipjacks dredging oysters.

But times have changed. The old country stores have dwindled in number. Subdivisions have taken the place of what was once sprawling farmland. As Mary Lou sees it, her acrylic paintings are a visual “history book for Southern Maryland,” she said.

“I have endless ideas of what I want to paint, [but] a lot of it is disappearing,” she added.

Those who have lived in St. Mary’s County for years — especially those who frequent government buildings, various art markets or MedStar St. Mary’s Hospital — have almost certainly seen her work displayed.

Younger folks will identify the Tiki Bar in Calvert County and the Gov. Thomas Johnson Bridge in some of her paintings, or perhaps recognize the Solomons Island bed and breakfast. Those with an appreciation for the county’s history might notice the Blackistone Island Lighthouse, or recognize Buzzy’s Country Store in Scotland attended by 1950s-style Ford trucks and adorned with vintage Coca-Cola signs.

But it’s the county’s aging population that will most appreciate those places whose memory Mary Lou is keeping alive through her work: the now-closed Pennie’s Bar in Leonardtown, for instance, or Swann’s Store and Hotel, which once existed in Piney Point.

“Every now and again you sell to someone who’s young, but they’re usually a waterman, fisherman, hunter — you buy art because it relates to you,” she said. “This doesn’t relate to youth anymore. So this isn’t selling like it used to ... someone making a living in art doesn’t do fine art anymore.”

There is some local history, though, that is relegated to memory. In 1992, Mary Lou’s studio “burned to the ground” from an electrical short in a wall switch, she said.

“We lost everything,” including 65 original pieces and countless photos she “had taken over the years,” which she uses for reference as she paints, she said.

“Boats that aren’t around anymore, barns that are gone. Just the county,” Jeff said.

They also lost their wedding photos and many pictures of their two children, Andy and Shannon.

Mary Lou remembers her mother telling her, “You toughen up, girl. Remember what sold and what didn’t sell. And don’t paint the s- — that didn’t sell.”

Mary Lou was creating “ever since I could hold a crayon,” she said. “I had always done landscape, I love landscape. I had done a lot of barns and boats and never really switched over.”

“I don’t think there’s a craft I haven’t done. I ruined my mother’s dining room table with nail art,” she said, with the same big, infectious laugh she shares with her husband.

Her mother, Tilly, whom she called “the backbone of my family,” was a graphic artist at Naval Air Station Patuxent River, and encouraged Mary Lou to pursue her art.

Mary Lou graduated from St. Mary’s Academy in 1975, then an all-girls Catholic school that used to sit at the current site of the College of Southern Maryland building in Leonardtown before it combined with the neighboring all-boys school in 1981 to form St. Mary’s Ryken High School.

“Back then when you were a girl, you went to typing school, you became a secretary,” Mary Lou said.

She attended Maryland Institute College of Art for just one year (then later, another year at St. Mary’s College of Maryland), after meeting Jeff in 1977 when she worked as a lifeguard at NAS Pax River. He had been attending Virginia Tech, driving seven hours to visit Mary Lou on the weekends, but eventually dropped out, like his soon-to-be wife.

“We fell totally in love and it ruined our college careers,” Mary Lou said as her snowflake earrings bounced slightly when she laughed, the studio light dancing off them.

“He’s the reason why I’ve done anything. I really never had any faith in my work,” she said. “We’re a team. My mother always said we’re two old mules pulling in the right direction.”

Mary Lou describes herself as “kind of a recluse,” a description somewhat at odds with her warmth and charm. She is conversational, and intermittently tells stories about the watermen she knows, her former classmates at St. Mary’s Academy, and dotes on her children’s accomplishments.

But manning the booth at art shows makes her feel like she’s selling herself, she said, and that leaves her feeling anxious.

“I know a lot of people who make their living in art — they always doubt themselves,” she said. “I don’t go out in public a lot. I always think I should be something I’m not. … I don’t want people to think I’m stuck up. I’m just a country girl who likes to paint.”

For over 40 years, Mary Lou has done the painting, and her husband has served as the traveling marketer and salesman, matter and framer.

Despite her work being lauded by artists and art connoisseurs alike, Mary Lou is exceedingly humble. She fawns over the work of Edward Hopper, Robert Bateman and Lisa and Peter Egeli, saying, “I’m the used VW, they’re the Porsche.

In her world, looming woodlands, winding creeks and rivers, and scenic marshes lend themselves easily to her paint brush. She often treks out to these locations — not only in Southern Maryland, but in Baltimore, Annapolis and the Eastern Shore as well — to snap numerous photos she can reference as she paints.

In one of her favorite pieces, she portrays the stillness of Chincoteague wetlands. The yellowing trees line the background behind a docked green boat whose reflection gleams off the water’s glassy surface. A heron sits on the water’s edge among the tall wheat-colored grasses. It is quiet and peaceful, the qualities that have always drawn Mary Lou to nature, and the water.

The painting hangs in her home; she’s not sure why it’s her favorite.

“I’ve fallen in love with some of them — you put your heart and soul in it,” she said. “Some things just turn out right … you can never never paint the same picture the same way twice. I guess all the moons lined up right.”

But to Mary Lou, the golden years of selling her work are behind her.

“We did make good money, but now it’s dropped off — kids don’t want this. And I get that, it’s not modern — this is an older person’s art,” she said.

To confront a shifting art market, Mary Lou has had to “switch gears,” she said. She started painting giftware and cookware about five years ago. She joined Etsy. She has added a collection of brightly colored, mixed-media aquatic paintings featuring mermaids and, of course, blue crabs, which she says are well liked among children. She “sold a ton of” stuffed ham cutting boards around Thanksgiving, and her garden flag sales usually pay for booth space at art shows.

“My idea of retirement would be to paint five days a week and not have to worry about computers. But it’s just not gonna happen, not anytime soon,” she said.

But, regarding the changing market, Mary Lou Troutman said she’s “not bitter. I’ve painted my childhood, my memories of the county. In fact, I’d like to put out a question: Who’s gonna paint the future? And what are they gonna paint?”

She wonders if young local artists who depict the county will reflect its changes — painting a Wawa or Sheetz instead of Swann’s Store, for instance.

“That’s gonna be the county store 50 years from now. I joke, but it will be interesting,” she said. “Andy Warhol captured the Campbell’s soup can — what’s the next generation of artists gonna show to the community?”

Mary Lou’s greatest artistic achievement, she said, was “showing the love for community,” and “getting the community to recognize the history” here.

“I really do love St. Mary’s County,” she said.