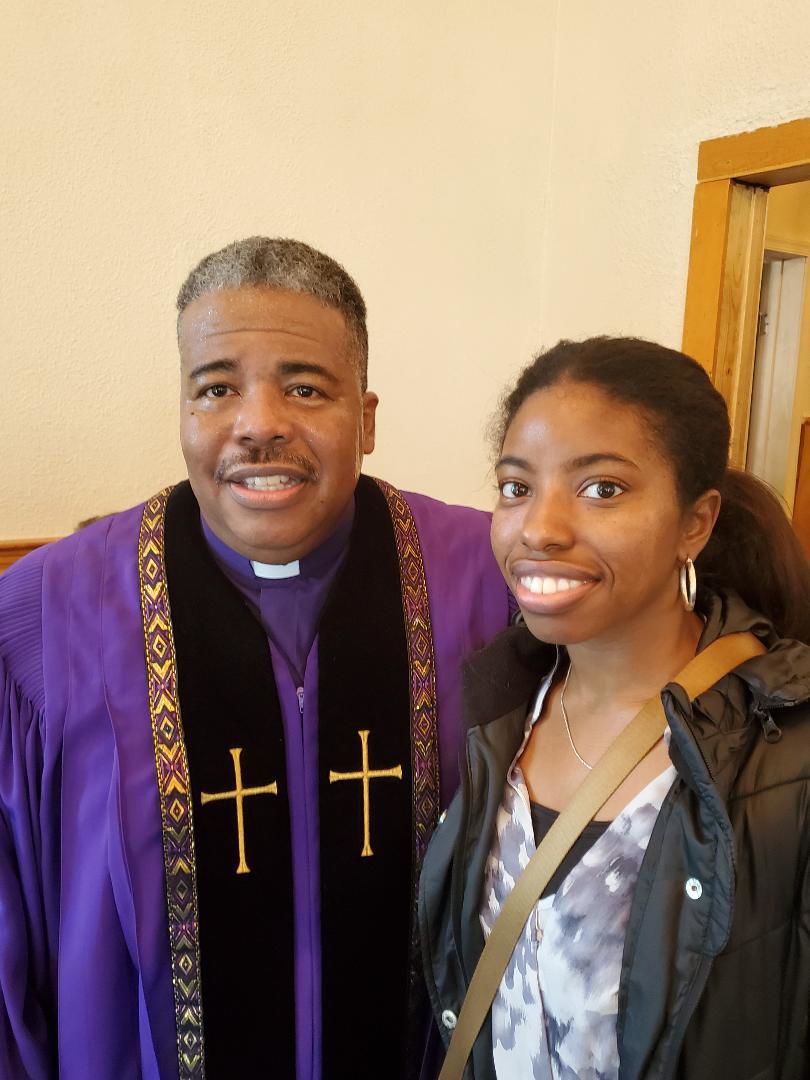 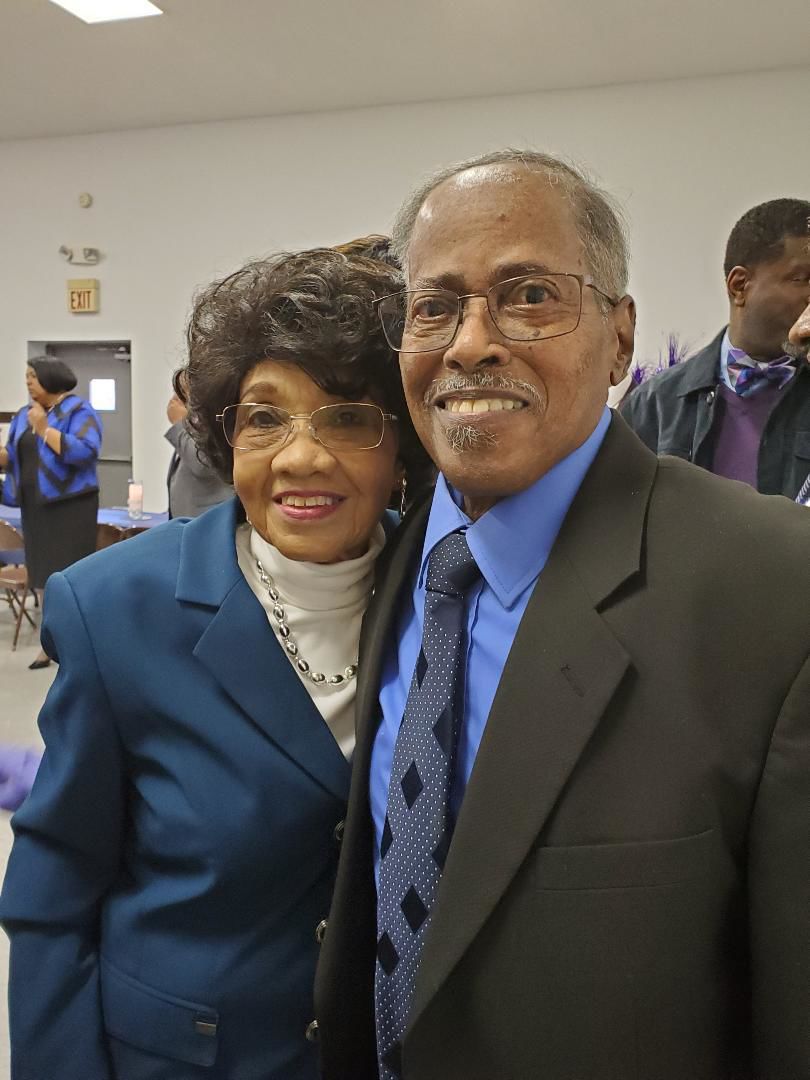 Mt. Hope Missionary Baptist Church elected the Rev. Sterling R. Swann Jr. as its pastor-elect on Dec. 7 and he assumed those duties on Sunday, Feb. 2, according to a news release from the church. He is the 13th pastor of the first African American Baptist church in Charles County, organized in 1867.

Rev. Swann told the congregation that it felt like he was coming home, having attended Mt. Hope as a young child with his parents, Sterling Sr. and Carolyn Swann. Both parents were in attendance as their son delivered his first sermon at Mt. Hope as pastor-elect. Rev. Swann shared that his parents will be celebrating 59 years of marriage this year and that they were married at Mt. Hope, which brought a round of applause from the congregation.

Carolyn Swann said she was so proud of her son and how God continues to use him is a true blessing for so many people. Also in attendance was Rev. Swann’s daughter, Alisha Swann, who was full of smiles, hugs and kisses for her father after the service.

Rev. Swann grew up in Marbury and attended Charles County schools. He was supported and surrounded by many visiting relatives, as well as Rev. Carl V. Messiah Sr. the retired pastor of Pleasant Grove Missionary Baptist Church, who is fondly referred to by Rev. Swann as the bishop of Charles County. Rev. Swann joined Pleasant Grove Baptist Church at the age of 10, where he was very active in Sunday church school and sang with the youth choir.

Deaconess Diane Heard shared, during the early morning praise service, that she and Rev. Swann attended classes together and she would often tell him he would grow up to be a preacher because she could see the spirit in him.

Mt. Hope displayed a huge welcome banner across the front of the altar which Rev. Swann could easy see as he was led into the church by usher Brenda Stevenson as the entire congregation rose to their feet to welcome him. There was much excitement and enthusiasm in the air as he approached the pulpit. His spirit-filled first sermon to the congregation, entitled “God’s Fresh Vision for Mt. Hope,” coming out of the Book of Jeremiah 29:1-11, was so well received and there were several times during the sermon when people would rise to their feet in loud applause and with plenty of “amens.”

Rev. Swann shared with the church filled listeners that God has plans for Mt. Hope to prosper. During an interview with Rev. Ruby M. Brown-Thomas, Rev. Swann shared a few details about his vision for Mt. Hope, which includes focusing on discipleship, worship, teaching, community involvement, missionary work and youth programs. He also stated that “Mt. Hope has a rich history being a church organized by slaves and former slaves,” adding that it was his desire to reclaim that significance by revitalizing its role as a leader within the community.

Deacon William Bannister remarked, “The entire church is so excited to have Rev. Swann, who has demonstrated his exceptional theological preaching and teaching for many years.”

Many of Mt. Hope’s members are related to Rev. Swann and they expressed warm congratulations to him, including the church clerk, Terri Robertson, who along with others planned his welcoming reception.

Deaconess Connie Posey stated, “He will be an inspiration to the church.”

“He will lead and guide us as we study under his leadership,” commented minister Rita Wallace, based upon Rev. Swann’s well-achieved theological learnings and educational schooling.

Rev. Swann preached his first sermon on July 31, 1988. He entered the Washington Baptist Seminary in October 1988 and in November 1991 he was ordained to the Gospel Ministry at the Pleasant Grove Baptist Church under the pastorate of Rev. Carl V. Messiah Sr.

In June 1992, Rev. Swann graduated from the Washington Baptist Seminary with honors. He received a bachelor of arts degree in theology from Almeda University in 2004, a masters of theology degree in ministry also from Almeda University in 2005, and masters of divinity degree from Wilbur H. Waters School of Religion, Inc. and Theological Seminary in 2007.

He received his doctor of theology degree in theological studies from Almeda University School of Theology on April 25, 2013, a doctorate in Christian education in 2014, and his doctor of divinity degree in ministry from the Wilbur H. Waters School of Religion and Theological Seminary on June 3, 2017. He is currently taking online classes with the Dallas Theological Seminary to continue his Christian education and to stay “sharp” for the work of ministry.

He is the former moderator of the Potomac River Baptist Association of Maryland, D.C., and Vicinity, and served in this position from July 2014 to July 2018. He is a member of the Missionary Baptist Ministers Conference of Washington, D.C., and Vicinity. He also serves as the president of the Wilbur Henry Waters School of Religion, Inc., and Theological Seminary, a position he was elected to in November 2015.

Rev. Swann continually gives praise to God for all his wonderful blessings and is striving to be all that the Lord wants him to be in Christ Jesus according to the release. It stated that he tries to live by the words as recorded in Galatians 2:20: “I am crucified with Christ: nevertheless I live; yet not I, but Christ liveth in me: and the life which I now live in the flesh I live by the faith of the Son of God, who loved me, and gave himself for me.”