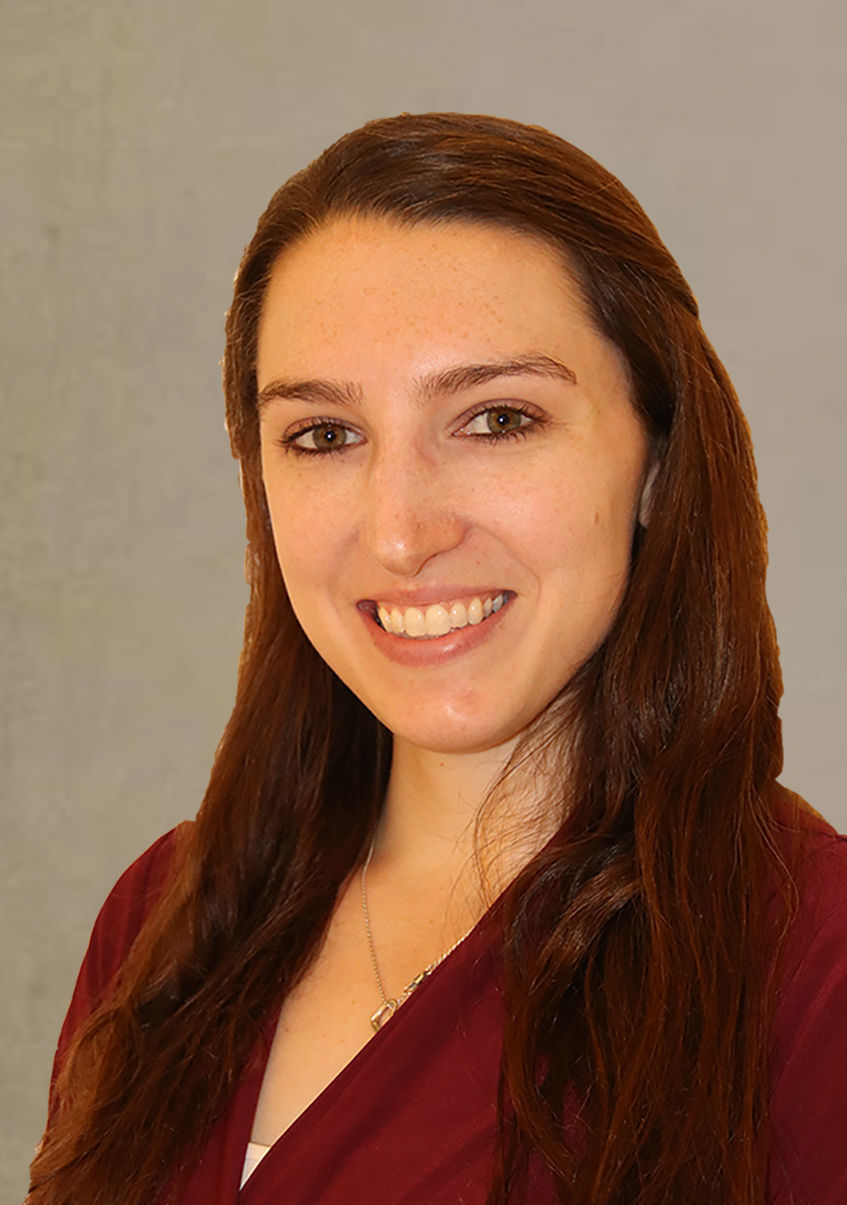 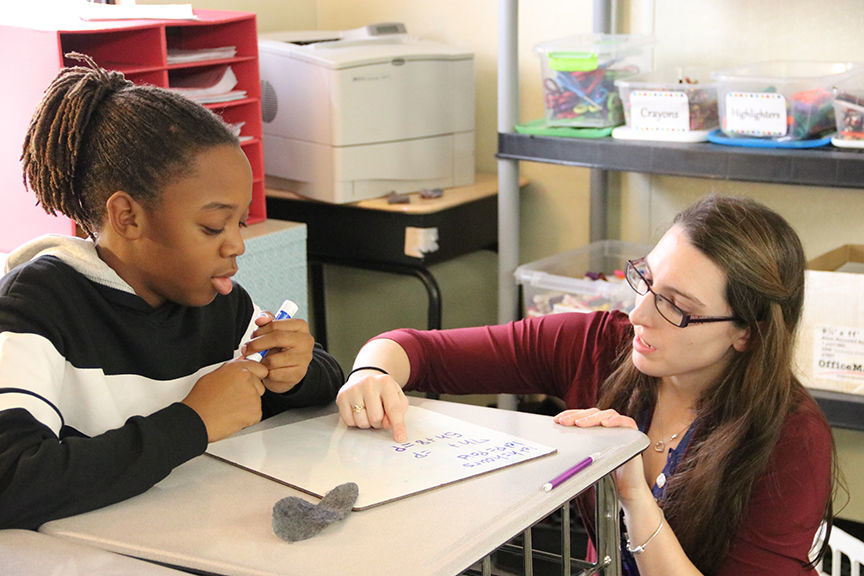 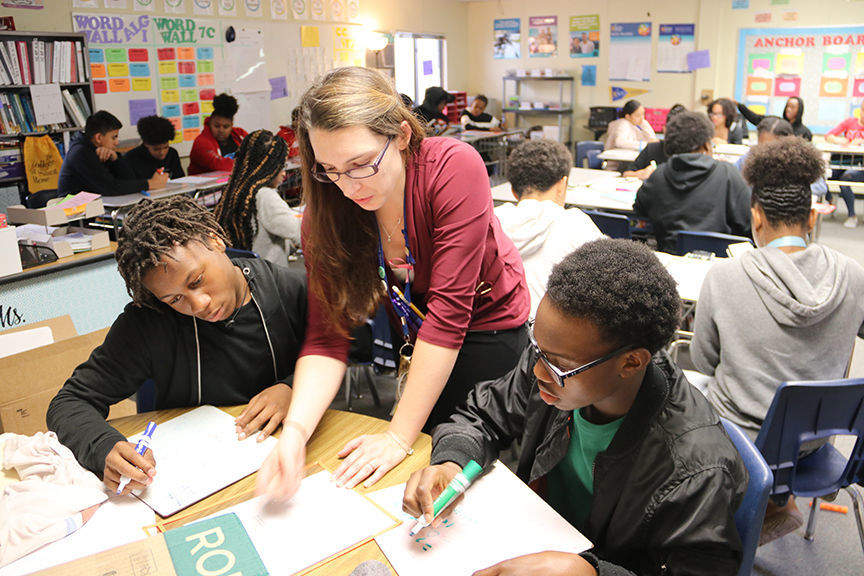 Casey Cleary, center, a math teacher at Benjamin Stoddert Middle School and Charles County’s finalist in The Washington Post’s Teacher of the Year Award program, goes over an equation with Stoddert eighth-graders Eric Melton, left, and Donald Uzoukwu. Cleary and her students are currently teaching and completing assignments through distance learning.

Casey Cleary, center, a math teacher at Benjamin Stoddert Middle School and Charles County’s finalist in The Washington Post’s Teacher of the Year Award program, goes over an equation with Stoddert eighth-graders Eric Melton, left, and Donald Uzoukwu. Cleary and her students are currently teaching and completing assignments through distance learning.

Since she was a kindergarten student, Casey Cleary has been comfortable in a classroom and knew it was a place she belonged — and not only as a student. “I wanted to be the one who wrote on the chalkboard, so I figured I had to be the teacher to do that,” Cleary said. Even at home, school was on her mind as she tried to rope her brothers into playing “school” with her.

Cleary, a math teacher at Benjamin Stoddert Middle School, fulfilled her goal of becoming an educator, and as the Charles County Public Schools finalist in The Washington Post’s Teacher of the Year Award program, her career choice proved a perfect fit for her.

“What has stood out the most when I visit her class is the effectiveness of the positive relationships she’s built with her students,” Stoddert’s Principal Erica Williams said in nomination materials. “Her students are receptive to redirection, feedback and suggestions because they truly believe she is invested in their success, and trust that she will support them along the way.”

The middle school years prove to be challenging for many. Students are not little kids anymore, but they are not teenagers either. Cleary originally planned on teaching fifth grade, even completing an internship in her senior year of high school as a student-teacher in a fifth-grade class at her former elementary school. Realizing math was her passion, it made sense to devote her teaching career to it. As a middle school teacher, Cleary sees her students go through many changes in three years. “They make such huge gains over their middle school career and go through so many changes, plus they still will have silly fun as they aren’t too grown up yet,” Cleary said. “It is definitely a unique age group, but there is never a dull moment with them, and they always keep me on my toes.”

Harmony Holmes, a North Point High School freshman, was in Cleary’s class in eighth grade. Holmes said she hated school, and the middle school years were the most tumultuous. “I always doubted myself and my abilities. I was an emotional kid going through a lot at that time in my life,” Holmes wrote in a nomination letter. “I was honestly ready to give up on school and let myself quit. Then I met Casey Cleary and my whole life changed.”

Holmes admits it sounds dramatic, but it is the truth. Cleary is tough, but fair and teaches more than math. She talks to students about their responsibilities beyond the classroom and what they’ll face as they grow older. “You do what you are told to do in the time you were given, or you get fired,” Holmes said. “Ms. Cleary taught me that. Yes, she helped us with our work, but she didn’t do it for us. She wanted us to learn that we don’t get that many chances, so the one chance that we do get, we better make it count. There will not always be do overs.”

North Point freshman and Cleary class alum Jordyn Davis agreed. “Ms. Cleary has been a role model for me, she’s taught me to be more confident and that I am where I am for a reason, it wasn’t an accident,” Davis said. She counts Cleary as her inspiration for wanting to become an educator. “I am forever grateful to have a teacher like Ms. Cleary because I truly believe without meeting her, I wouldn’t be the same person I am now,” she said.

“Ms. Cleary has taught me so much – whether it’s about being organized or being independent,” said Amy Garcia-Lopez, a current student in Cleary’s class.

Cleary instills confidence in her students by listening to them, building relationships, and ensuring they understand the academic material they are studying. “She has an innate ability to connect with her students, meet them where they are academically, and move them forward,” Mary Lee Sadler, a math content specialist with CCPS, said. “Her students leave her classroom as seasoned mathematicians ready to tackle new challenges with confidence.”

The work isn’t dry or boring if Cleary can help it. She peppers lessons with scenarios that appeal to pre-teen minds. “I try to make math relevant to them,” she said. “If they don’t see a purpose of learning the material, why would they even want to?” Earlier this year, classes studied exponential functions and how exponential growth can be seen in a zombie apocalypse – a prescient metaphor that taught students how illnesses can spread among a population. “Now they are actually seeing that math happening in real life,” Cleary said.

Another hallmark of her instruction is an end-of-the-year music video. The project features students singing a pop song with the lyrics rewritten by Cleary to explain math concepts. The tradition started with students learning the quadratic formula to the tune of the folk song “Pop Goes the Weasel.” They updated it to Willow Smith’s song “Whip My Hair.” Since then, classes have filmed videos based on “Work” by Rihanna, Drake’s “One Dance” (“One Graph”) and “Shape of U” by Ed Sherran, as well as others. “I have found that this has helped build a community in my school as it is something positive for Stoddert,” Cleary said.

This year, although separated by distance learning, Cleary put the finishing touches on the lyrics and the video will still be filmed, just in an adapted way. “I never expected these videos to grow the way they did, but I love that it happened. It taps into the talents that students can share,” she said. “Their teamwork and support for each other continues to inspire me every year to see what we can accomplish together.”

The songs have come in handy in high school classrooms, too. “It’s two years later in Algebra II and I still remember the quadratic equation song that she had us remember,” North Point sophomore Aija Branson said. “I see other people flipping through their notes for it.”

Separated from her students and colleagues by distance learning, Cleary said she is miserable. “I purposely picked a job that I wouldn’t have to sit in front of a computer, and I could interact with students and try something new every day,” she said. “I do live Q&A sessions with my students weekly and that is a great time for us to catch up. I look forward to those times – it reminds me that I am still a teacher even though I don’t get to be with them in school every day.”

Graduating from the College of Saint Rose in Albany, N.Y., with a master’s in education, Cleary started at Stoddert in 2013 as a math teacher who is currently teaching Algebra I and seventh-grade compacted math. She’s the eighth-grade team leader who is in charge of two eighth-grade field trips, award assemblies, events and promotions. She is the Advancement Via Individual Determination coordinator, a Code.org master math teacher and training facilitator for CODE.org. She was named an outstanding math teacher by the Southern Maryland Electric Co-op in 2017 and has written curriculum for CCPS.

She wants her students to know that she cares about them and wants them to succeed. “Sure, I would love if they remember how to factor a quadratic after they leave me, but I really want them to remember they can accomplish anything they put their minds to,” Cleary said.

As Stoddert’s AVID coordinator, she touts the benefits of college to students, but knows college isn’t a one-size-fits-all option. “Even though all students are not on the college path, I want them all to know that they can achieve in whatever path they choose by working hard and holding themselves to high expectations,” she said. “I am their advocate and always will be long after they leave my classroom.”

The Washington Post established the Teacher of the Year Award to recognize teachers who exemplify excellence. The program recognizes excellence in teaching, encourages creative and quality instruction, and contributes to the improvement of education in the Washington, D.C., metropolitan area.