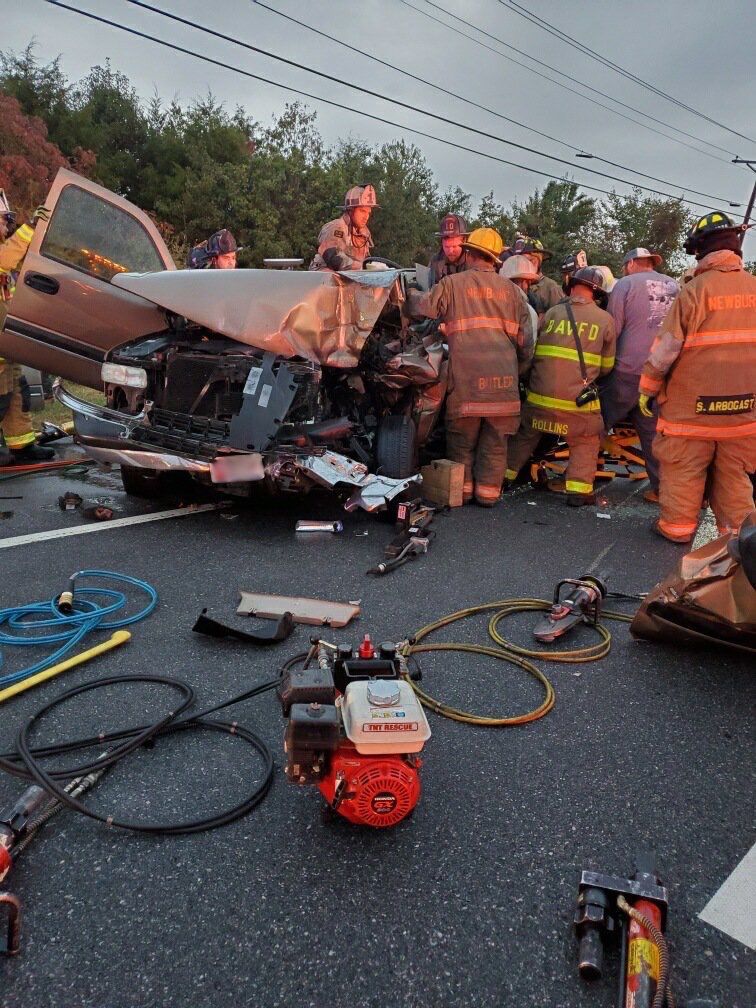 First responders work to extricate the victim of a Sunday evening accident from their vehicle in Newburg. 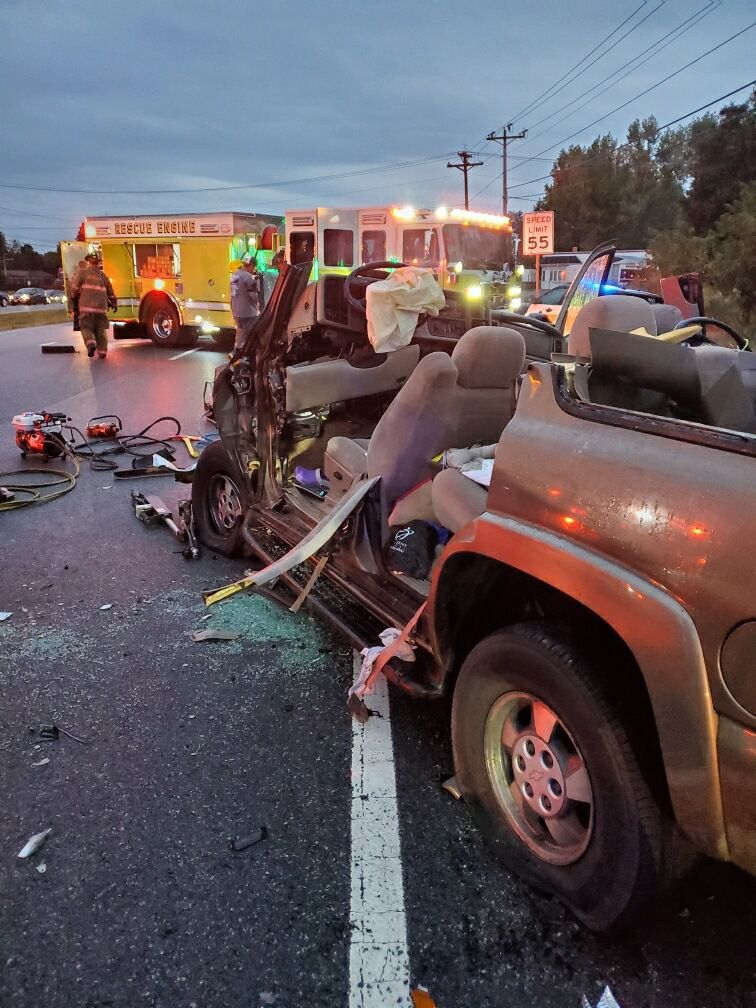 A Chevy Tahoe was severely damage and its driver hospitalized following a Sunday night crash in Newburg. 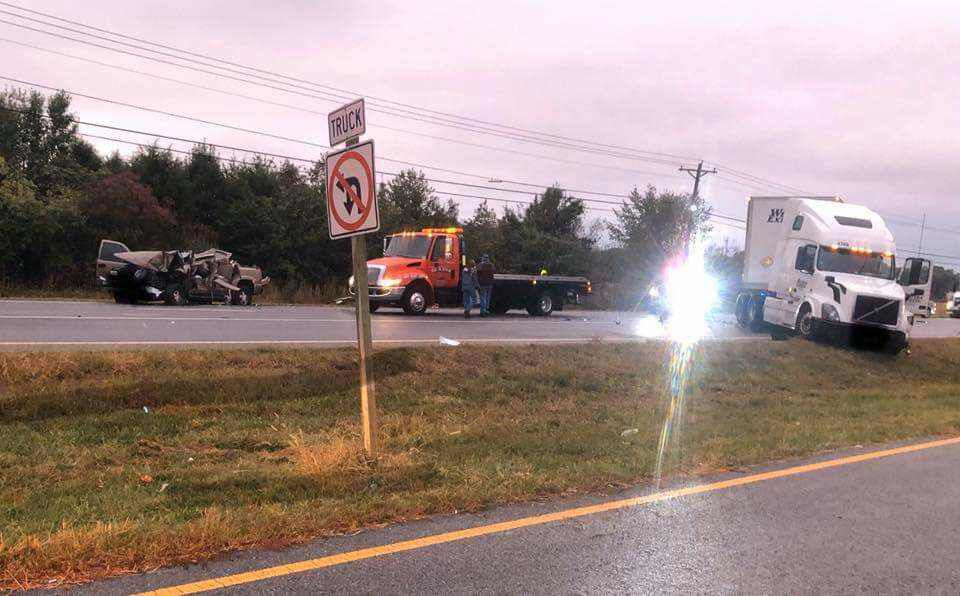 A tractor-trailer that was disabled following a collision Sunday night in Newburg shut down traffic on U.S. 301’s southbound lanes for much of the early hours of the night.

First responders work to extricate the victim of a Sunday evening accident from their vehicle in Newburg.

A Chevy Tahoe was severely damage and its driver hospitalized following a Sunday night crash in Newburg.

A tractor-trailer that was disabled following a collision Sunday night in Newburg shut down traffic on U.S. 301’s southbound lanes for much of the early hours of the night.

Charles County Sheriff’s Office detectives arrested three men wanted in connection with an armed robbery that occurred earlier this month in Waldorf, the office reported in a press release.

On Oct. 1, the release says, a suspect entered a market in the 10900 block of Berry Road, displayed a gun and demanded money. During the robbery, the suspect fired a round, which struck the ceiling. He fled in a car with two other suspects. No one was injured.

Through the investigation, the suspects were identified as allegedly linked to a robbery in Prince George’s County, according to the release. On Oct. 10, the suspects were located at an address in Charles County and arrested without incident. Lawrence Trequan Fields, 26, of Waldorf; Dimitrius Martaz Hamlett, 25, of White Plains; and Quintin Marcell Johnson, 25 of La Plata were charged with armed robbery, conspiracy to commit armed robbery, first-degree assault, reckless endangerment, use of a firearm during a violent crime and theft.

All three are listed in online court records as being held without bond as of Oct. 11, with bail reviews that were scheduled for Oct. 15. Det. J. Long is investigating.

One injured in Sunday evening collision

A Sunday evening accident in Newburg hospitalized one person and shut down traffic on U.S. 301 as first responders worked to clear the scene.

Maryland State Police said they and first responders were called to an accident involving a tractor-trailer that had occurred in the area of U.S. 301 and Route 234 in Newburg Sunday night. The initial investigation showed the driver of a Chevy Tahoe was attempting to turn from the westbound lanes of Route 234 onto southbound U.S. 301 when they lost control of their vehicle and entered into a neighboring lane, colliding with an oncoming tractor-trailer.

The driver of the Tahoe was trapped as a result of the crash and had to be extricated from the car. The victim was transported by helicopter to a local trauma center for treatment for their non-fatal injuries. The driver of the tractor-trailer was not injured, although the vehicle became disabled as a result of the crash. U.S. 301’s southbound lanes remained closed until just after 9 p.m. Sunday evening for first responders to clear the scene.

For those with information that will lead to the arrest or indictment of a person responsible for a crime in Charles County, Crime Solvers offer rewards up to $1,000. Anyone with information about an unsolved crime or the location of a fugitive will remain anonymous and may contact Charles County Crime Solvers by calling 1-866-411-TIPS. Tips can also be submitted online at www.charlescountycrimesolvers.com or by using the P3Intel mobile app on a smartphone, which can be found in the Android and Apple stores by searchingP3tips.

The Charles County Sheriff’s Office is a full-service law enforcement agency comprised of more than 600 police, corrections and civilian personnel responsible for protecting more than 160,000 residents. The sheriff’s office was accredited by the Commission on the Accreditation of Law Enforcement Agencies in 2001 and has been designated as a CALEA Gold Standard of Excellence agency since 2011. Established in 1658, the CCSO is one of the oldest law enforcement agencies in the United States. For more information, visit www.ccso.us.