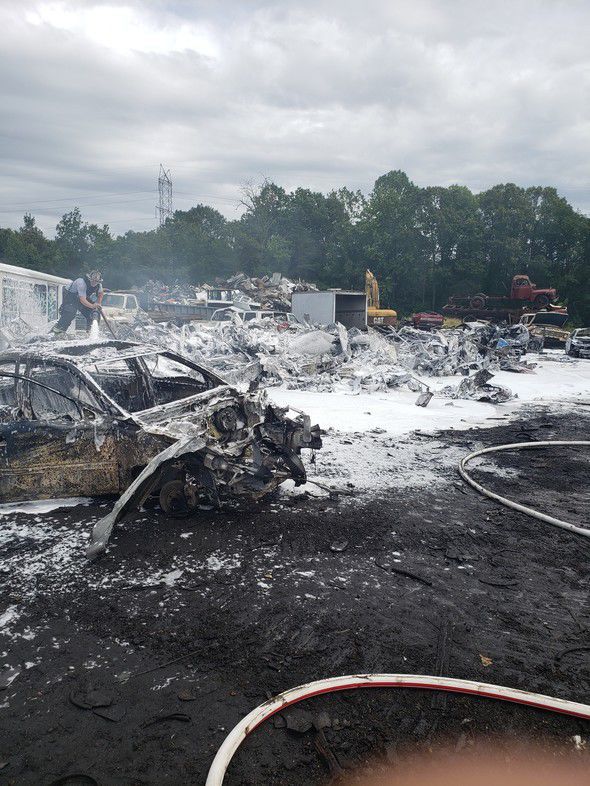 A Tuesday fire destroyed seven scrap vehicles in Charlotte Hall after a charged battery in the trunk of a vehicle ignited residual fuel.

A Tuesday fire destroyed seven scrap vehicles in Charlotte Hall after a charged battery in the trunk of a vehicle ignited residual fuel.

One dead in Indian Head vehicle crash on Saturday

A Nanjemoy man died in a single vehicle crash in Indian Head Saturday night, according to a press release from the Charles County Sheriff’s Office.

Shortly before 11 p.m., officres responded to the area of Smallwood Church Road near Mason Springs Road for the report of a crash. The investigation found that Rudolph Cleveland Posey Jr., 63, was operating a SUV southbound on Smallwood Church Road when he lost control of the vehicle and struck a tree.

Posey was transported to the hospital where he was pronounced dead. Charles County Sheriff’s Office Pfc. Walker of the traffic operations unit is investigating.

A fire in Charlotte Hall destroyed seven scrap vehicles after an accident on June 16, according to a press release from the Office of the State Fire Marshal.

At about 2:30 p.m., seven firefighters from the Mechanicsville Volunteer Fire Department responded to Carpenter Lane for the reported fire. The fire was discovered by employees and took about 30 minutes to control.

No injuries or deaths were reported and no money was reported lost in structural or content damage. The cause was determined accidental, as a charged battery in the trunk of a scrap vehicle ignited residual fuel. Workers were in the process of scrapping vehicles when the fire started while moving a vehicle with an excavator.

West Virginia man charged with sexual abuse of a minor

A Martinsburg, W.Va., man was charged with sexual abuse of a minor, second-degree rape and third-degree sexual offense after an incident that occurred Sunday in La Plata.

According to Charles County Sheriff’s Office deputy Smith’s statement of charges, officers responded to the report of a sexual assault on a child. Upon arrival, officers obtained a statement from the victim, a 12-year-old female, who alleged that Kaleb Stuart Hilleary, 25, sexually assaulted her.

The victim and family members advised that Hilleary is a family friend who had been living with them since April/May of this year. The victim alleged that Sunday night, she fell asleep on the couch next to Hilleary around 10 p.m. and awoke around 11:15 p.m. to Hilleary allegedly touching her inappropriately.

The victim’s father confronted Hilleary about the incident, who allegedly responded by packing his bags and attempting to leave and return to West Virginia. After being arrested and transported, Hilleary allegedly admitted to inappropriately touching the victim, however, he stated he was asleep and does not recall the incident happening.

Hilleary is being held at the Charles County Detention Center on a $50,000 bond.

According to charging documents from Charles County Sheriff’s Office deputy Bigelow, shortly after 1:30 p.m., officers conducted a traffic stop on Leonardtown Road in Waldorf for reckless operation of a vehicle. The driver, identified as Darin Eugene Watson, 55, was seen swerving in and out of lanes causing other vehicles to drive off the roadway to avoid a collision.

Watson allegedly had glassy, bloodshot eyes and slurred speech when being interviewed by officers. He denied having anything to drink or having taken any prescription medicine. Watson failed standardized sobriety tests administered by officers and was arrested for driving under the influence.

A search of Watson’s vehicle revealed a white, powdery substance that was tested and indicated as cocaine. A large blue knife was also found in the center console that releases the blade at the touch of a button.

Watson was released on his own recognizance on June 5. His trial is scheduled for Oct. 14.