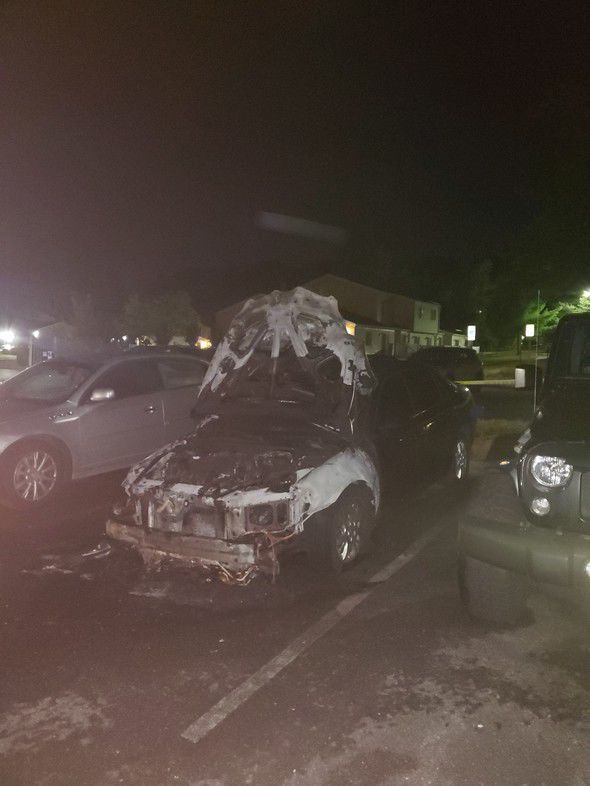 A June 9 vehicle fire did an estimated $1,200 in structural damage to a 2008 Chevrolet Impala.

A June 9 vehicle fire did an estimated $1,200 in structural damage to a 2008 Chevrolet Impala.

An Indian Head man was charged with second-degree assault, disorderly conduct and disturbing the peace after an incident that occurred May 30.

According to documents filed by La Plata Police Department Officer Plater, shortly after 10:30 p.m., officers responded to Washington Avenue in La Plata for the report of an assault. Upon arrival, officers heard screaming coming from the front entrance door of an apartment.

A citizen informed officers that a woman was being choked by a male in front of the building. Officers observed Joseph Frederick Curtis, 61, grabbing a female and forcefully pulling her towards him. Officers separated the two and detained Curtis.

The victim alleged that she got into an argument with Curtis that escalated until he allegedly started choking the victim around the neck with his two hands. The victim allegedly had red marks on both sides of her neck, a laceration on her right hand and a red mark on the left side of her back, which she alleged were sustained because of Curtis.

Officers determined on scene that Curtis was the aggressor. Curtis was released on his own recognizance on June 1 and his trial is scheduled for Oct. 6.

A vehicle fire was reported June 9 in Waldorf, according to a press release from the Office of the State Fire Marshal.

According to the release, at around 11:30 p.m., five firefighters from the Waldorf Volunteer Fire Department responded to the 3000 block of Otter Square for the report of a vehicle fire. The fire took about five minutes to control and did an estimated $1,200 in structural damage to a 2008 Chevrolet Impala.

The fire was discovered by a neighbor, and the area of origin is believed to be the engine compartment. The preliminary cause is under investigation. Anyone with any informations is asked to contact the fire marshal at 443-550-6835.

According to charging documents from Charles County Sheriff’s Office PO1 Stine, at about 7:30 a.m., officers spoke with the victim who alleged he was planning to meet Briana Kaitlin Sullivan, 18. The victim said the two planned to meet at the corner of Hurlock Place and Mt. Clare Place, and the victim arrived at the area at about 2 a.m.

While approaching the vehicle, the victim allegedly felt something tap the side of his head. When he looked, he allegedly saw Mason Tyler Oursler, 21, holding a handgun towards his head. Oursler allegedly said that if the victim moved, he would shoot him.

Oursler then allegedly grabbed the victim’s phone from him and demanded he give him his wallet and everything he had. The victim complied with Oursler’s demands and told officers he knew Sullivan because they went to high school together. He showed officers social media photos of Oursler and confirmed he was the one who allegedly robbed him