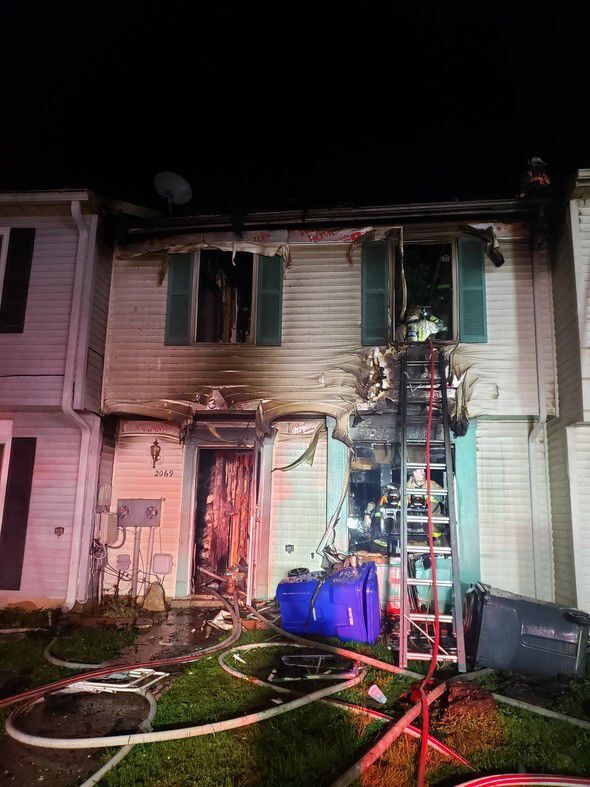 A two-story townhouse fire on Tuesday morning in Waldorf caused an estimated $175,000 in structural damage and $50,000 in content damage.

A two-story townhouse fire on Tuesday morning in Waldorf caused an estimated $175,000 in structural damage and $50,000 in content damage.

A fire in a two-story townhouse was reported in Waldorf early Tuesday morning.

According to a press release from the Office of the State Fire Marshal, around 12:30 a.m., 60 firefighters from the Waldorf Volunteer Fire Department responded to Tanglewood Drive for the report of a structure fire. The fire took 20 minutes to control and did an estimated $175,000 in structural damage and $50,000 in content damage.

The fire was discovered by the occupant, and the area of origin is believed to be the rear deck. Occupants of four townhouses were displaced as a result of the fire and are being assisted by the American Red Cross.

One firefighter was transported to MedStar Washington Hospital for burns, but was treated and released within a few hours. The cause of the fire remains under investigation at this time.

A 14-year-old female was charged with arson Tuesday stemming from a La Plata house fire that occurred Monday.

According to a press release from the Office of the State Fire Marshal, at approximately 7:30 p.m., firefighters from the Waldorf Volunteer Fire Department and surrounding departments responded to the 9600 block of Docs Place in La Plata. Nearly 60 firefighters needed 20 minutes to bring the fire under control inside the vacant, two-story, single-family dwelling.

No injuries were reported, and the fire caused an estimated $200,000 in damages. Deputy state fire marshals determined the fire was an intentional act and during the course of the investigation, identified the female juvenile as the person responsible.

The juvenile has been charged with first-degree arson and malicious burning and will be referred to the department of juvenile services.

The Charles County Sheriff’s Office is a full-service law enforcement agency comprised of more than 600 police, corrections and civilian personnel responsible for protecting more than 160,000 residents. The sheriff’s office was accredited by the Commission on the Accreditation of Law Enforcement Agencies in 2001 and has been designated as a CALEA Gold Standard of Excellence agency since 2011.