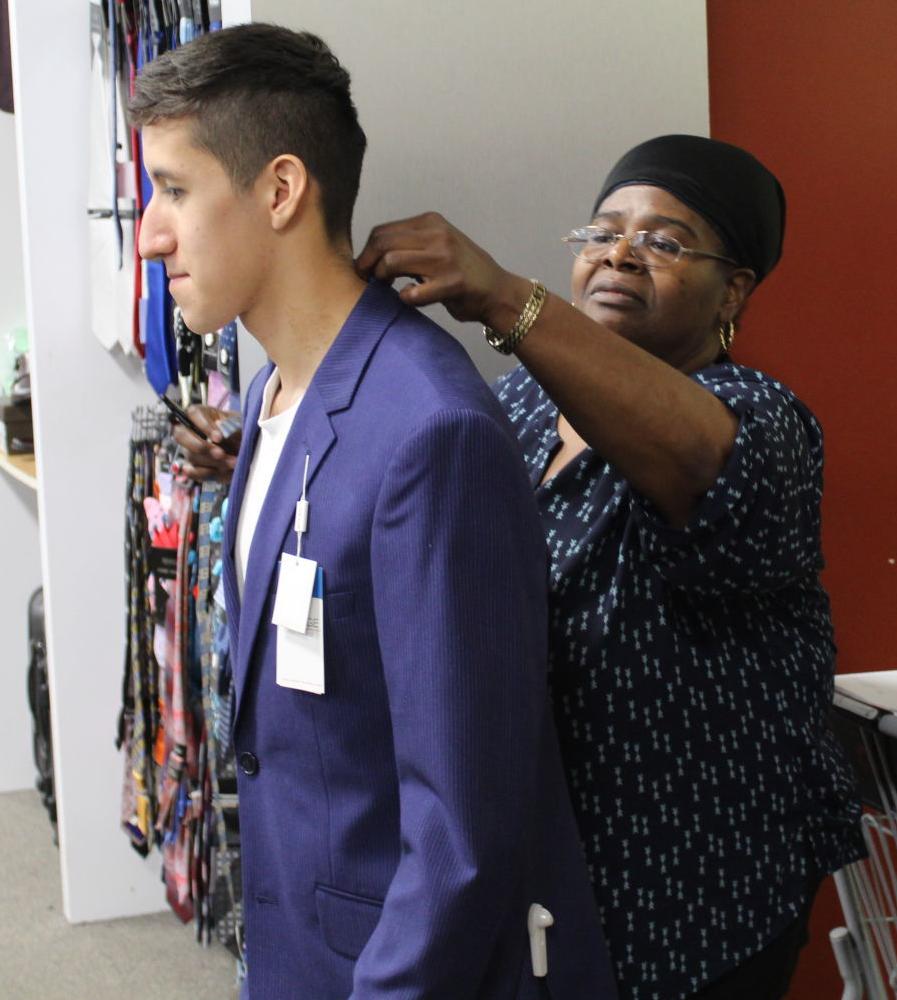 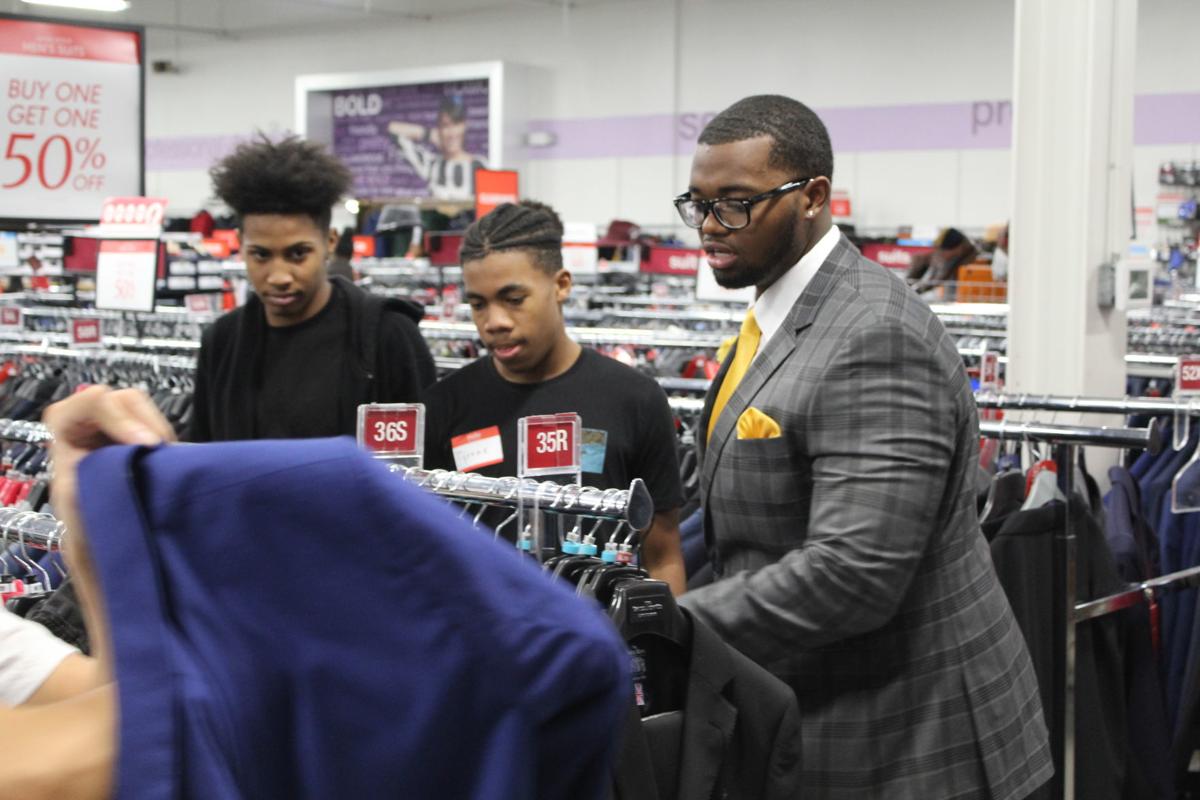 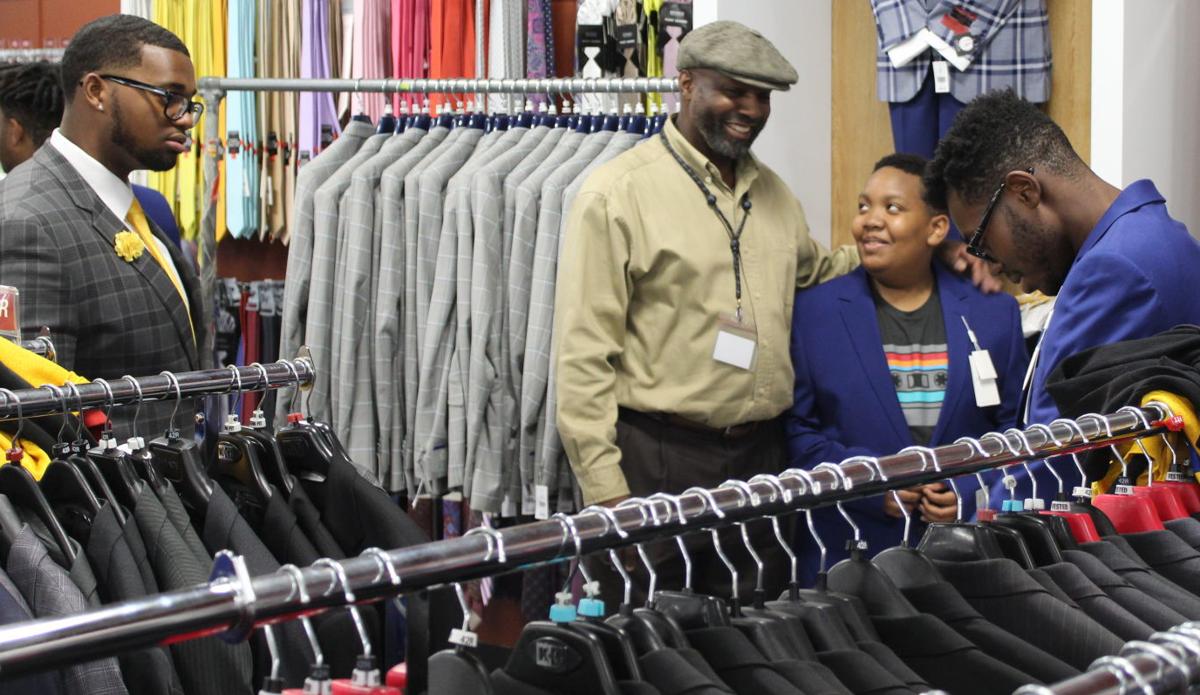 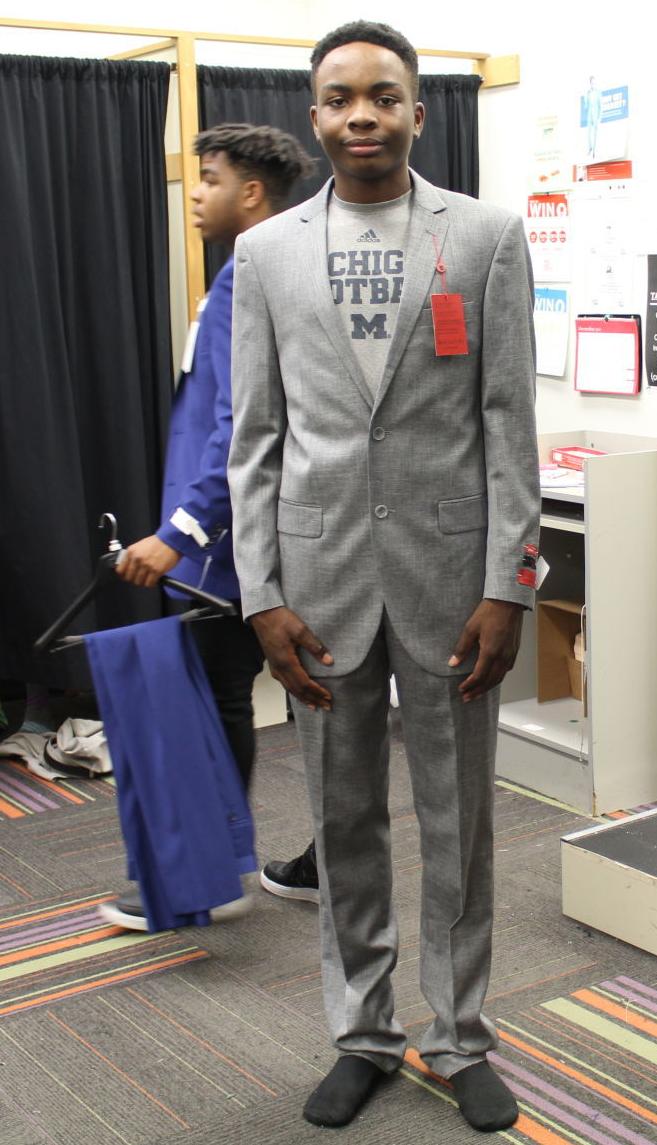 Calvert High School’s Aaron McCready is all smiles as he models his new suit.

Calvert High School’s Aaron McCready is all smiles as he models his new suit.

Andre Jones was about to celebrate his 21st birthday, but he was too old for a Chuck E. Cheese celebration, and he didn’t want a pony. Instead, he decided to celebrate by giving back, and that literally suited some Calvert High students to a T.

A 2016 Calvert High School graduate, Jones decided to purchase suits for 10 members of the school’s Minority Achievement Committee, of which he was impressed.

“It was just a great program where I saw great potential to help impact the lives of many African American males,” said Jones, who is a real estate agent and is scheduled to graduate in December from Hampton University in Virginia. “Whenever you can, always uplift your brother and always make sure you keep doing that. And always pay it forward. That’s the thing about MAC scholars, it’s not just mentoring and reaching out to minority students, that’s where our focal point is, but our ideal image is that every young man seeks to bridge the achievement gap and be successful in life.”

On Oct. 31, Jones, MAC Scholar advisors Chevy White and James Johnson and the scholars climbed into a Mercedes 14-passenger limousine for the drive to K&G Fashion Superstore in Waldorf.

“We even had champagne glasses,” said Calvert senior Asadrian Hudson, “with water in them.”

While at the store, each student ended up purchasing a Cavaliers-themed royal blue suit, white shirt and gold tie.

“The age range for the guys in this [generation] love to have a slim fit type of suit,” said store associate Allene Gordon, who lives in Bryans Road. “But the way they’re doing it, they’re keeping it classy and not too tight. They look really nice and conservative with the colors that they’re picking.”

“I explained to them how important it is in the business world that even if they don’t intend on going to college, just going to a job interview, it’s important to be professionally dressed,” Jones said. “You need to dress to impress. It makes a difference. I wanted them to feel and look like kings.”

And those students, that now feel like royalty, were now on cloud nine.

“When I first started getting fitted, it looked really good, and everyone ended up getting what I was getting,” Calvert sophomore Alan McCready said of his first suit. “He took time out of his day to help us get suits. It was very nice of him, and I am excited about it.”

The students were assisted by a team of store employees.

“I really think it’s awesome,” Gordon said. “[For those who] have never been in a suit, I think this is wonderful. These guys are enthusiastic about going out and doing this for other guys. They were back in the fitting area talking about it, and I love it.”

Calvert High teacher Michelle Stover heard about MAC Scholars and helped found the program in 2010 with Julie Morris and Mary Friedman. Recently, White and Johnson have stepped into leadership roles in the program, which requires its 20 to 25 male members to have at least a 2.2 GPA.

“Right now we have a lot of students in the schools that don’t have male role models in their lives,” Stover said, “so [the scholars are] kind of stepping in and saying, ‘You can do this, you can achieve, and you can be successful but here’s what you need to do.’”

And when his birthday started getting closer, Jones thought of the MAC Scholars.

“I was going back and forth trying to figure out where to go, what I was going to do and who I was going to invite, but I thought, ‘Why not go ahead and be a blessing for somebody else and make somebody else happy on my birthday?’” Jones said of Oct. 28. “I hadn’t come up with anything, and I was just thinking, ‘Man, what can I do?’ so I came up with this idea and reached out to [Stover], and she thought it was a great idea so we kind of just went with it.”

Jones, who is also a real estate agent with Lonnie Bush Real Estate in Virginia Beach, said he was overwhelmed watching the students shop for business attire.

“It was surreal, that’s the only way I can really explain it,” said Jones. “To see the excitement and just the abundance of joy on all of their faces was amazing. Just to know that somebody cared enough to treat them to all this and they didn’t have to give a dime was enough. It wasn’t about just giving them something. It was teaching them something as well.”

Jones said it was the best birthday he’s ever had, eclipsing the quiet celebration he had with family when he was 16.

“At [the store], I knew I was doing what I was called to do,” Jones said. “This is what I was sent here to do. This was my purpose in life. It was a feeling like no other to see the expressions on their faces. It’s unexplainable.”