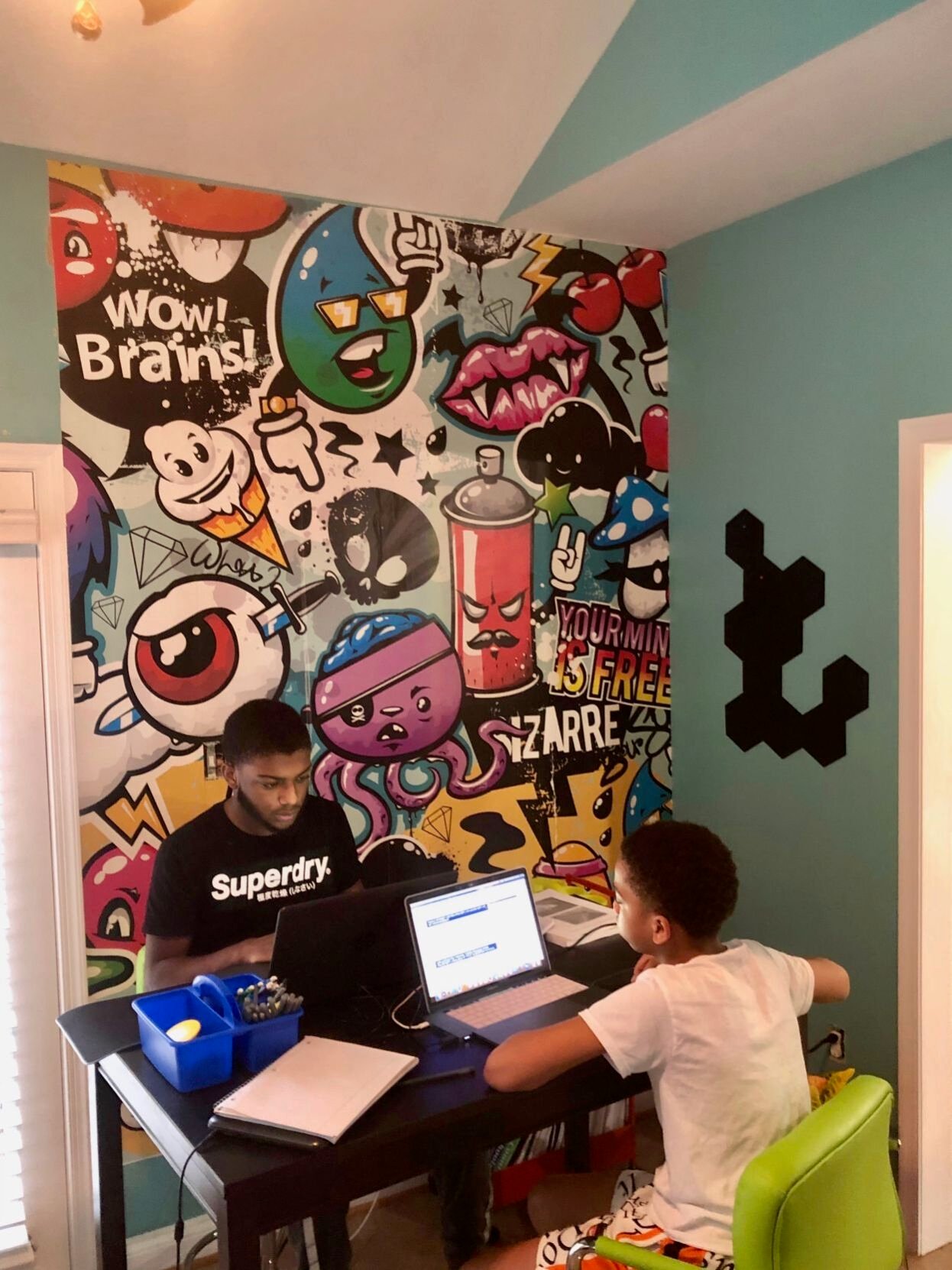 Genese Rollins of Waldorf takes a picture of Jayden Nickens, left, her 17-year-old son, and Amir Goldring, her 12-year-old, while online learning during the first week of school. 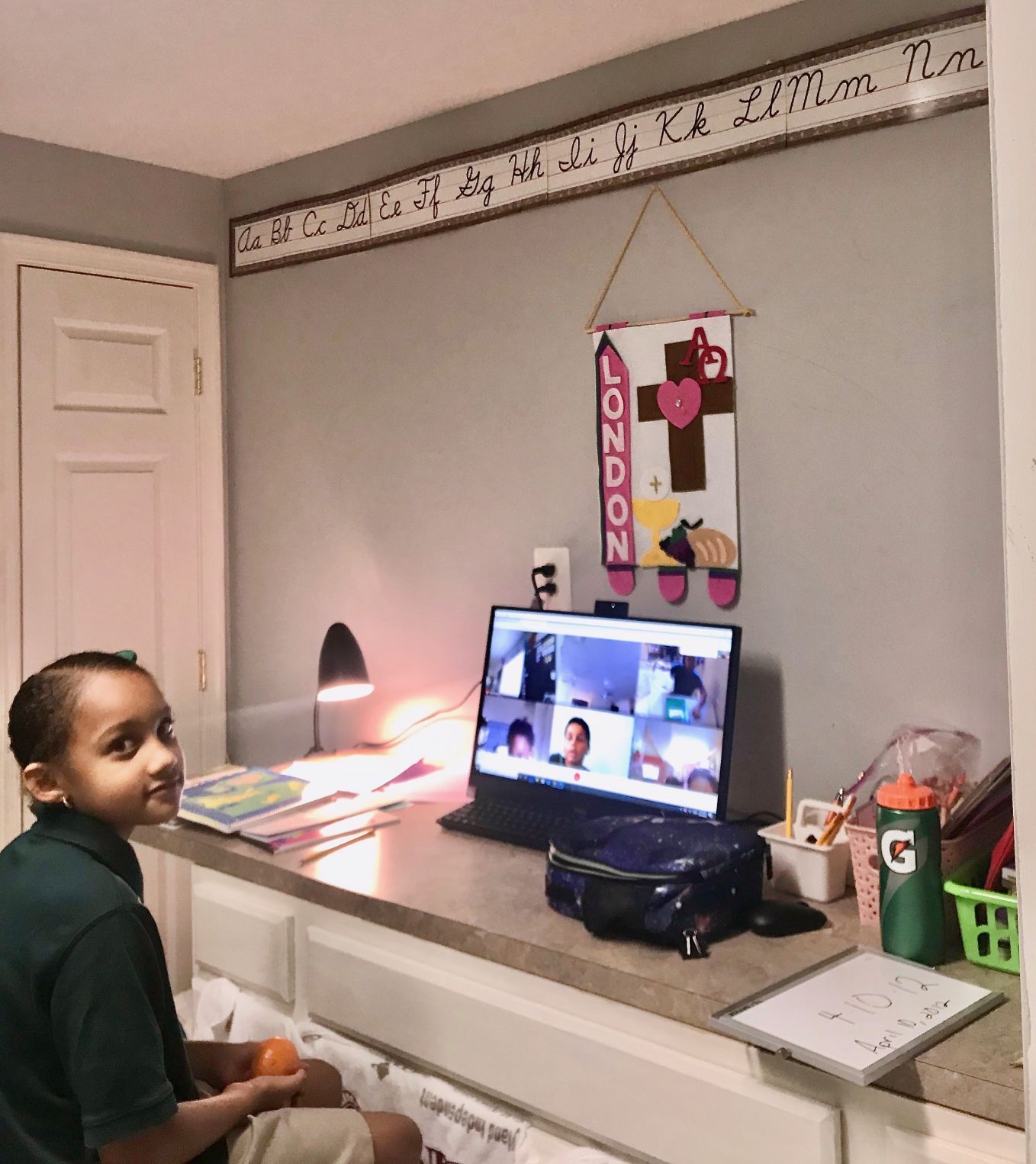 Jialita Sutton of La Plata takes a picture of her eight-year-old daughter, London Sutton, during the first day of school at Archbishop Neale School.

Genese Rollins of Waldorf takes a picture of Jayden Nickens, left, her 17-year-old son, and Amir Goldring, her 12-year-old, while online learning during the first week of school.

Jialita Sutton of La Plata takes a picture of her eight-year-old daughter, London Sutton, during the first day of school at Archbishop Neale School.

When Charles County parents and students prepared for the first day of virtual learning Monday, they ran into a problem. The learning platform was down.

The public school system sent a tweet Monday, Aug. 31, at 8 a.m. announcing Synergy, the online learning platform, as well as the school system’s main website were not working. Katie O’Malley-Simpson, spokesperson for the school system, said they were up and running a short time later, sometime between 9:30 and 10:30 a.m.

The school’s website later stated the system provider worked with the school system to provide additional resources that morning and they had prepared for the traffic volume in advance.

Students received excused absences due to login issues and the school system does not expect any other issues, according to the website.

The school system announced on Wednesday students will have to log in to Zoom when joining their first scheduled class starting Sept. 3

Despite the relatively quick resolution that morning, online learning was still a challenge for some parents.

Beverly Wilson, parent of T.C. Martin Elementary students, said her kids did not learn at all because they did not have an internet connection.

When she picked up her materials last Friday, she did not receive a jetpack or hotspot she was promised, she said. Wilson said she was told the devices did not arrive and they do not know when they will come.

“I just feel like we’re being forgotten,” she said, adding that she requested that school should not have started until everyone was given devices.

The school system sent an email Aug. 14 saying some students may receive a laptop by Aug. 31, the first day of school, while others may be assigned a laptop shortly after the start of the school year.

But Charmaine Thompson, the school system’s chief of instructional tech, said during an Aug. 11 school board meeting all students who needed a device would have one before the start of school.

O’Malley-Simpson said in an interview Monday there is a national delay in laptop deliveries. This week they used Henry E. Lackey High School’s gym as an internet center and they are hoping to do the same at Mt. Hope Elementary by the end of the week.

She also mentioned internet is available in school parking lots.

Wilson said the centers would not work for her because it requires parents to stay with their children. She added students cannot learn fully while sitting in a hot car in the parking lot.

“Children like mine that are not able to join online learning are disadvantaged because they’re put behind their peers,” she said. “How can they catch up?”

Despite the initial challenges, Amy Hollstein, the deputy superintendent, said teachers did a phenomenal job the first day. The first week was about building relationships and preparing the kids for class, she said.

“If anyone missed the early morning, everything will be fine,” she said.

Hollstein said she spent most of the day watching other classes and on Monday afternoon more than 8,000 classes in the county were taught. One of the classes Hollstein enjoyed was a second grade music class that was doing a worm dance.

Cidney McNeil of Waldorf said her third-grader was enjoying his music class. He was clapping and engaged virtually with the rest of his William A. Diggs Elementary classmates, according to his mom.

McNeil said she manages events and meetings for her job, which has had to rely on technology since COVID-19. She said she’s used to glitches and expects it.

“I’m surprised they got it up and running as quick as they did,” she said, adding it took about an hour. “I think grace is just needed right now.”

McNeil said communication could be improved. A teacher sent a Zoom link to students email when the system went off line. But her daughter did not think to check her inbox at the time.

Jialita Sutton’s children also had trouble that morning when the login failed at 6 a.m. Her Milton Somers student could only complete two classes, but her La Plata High School student logged into most of his classes.

“I really wish the public schools did a test run,” the Waldorf resident said. She later added some of her children’s teachers were responsive during the shutdown while others were not.

Sutton’s high schooler also took classes at the College of Southern Maryland and she described his online experience as “seamless.”

Her third grade daughter, a student at Archbishop Neale School, also had a smooth virtual experience. Although the Catholic school is open, Sutton kept her daughter home because she has asthma. She was sill required to wear her uniform and insisted on having recess by herself in the yard.

The tech issues didn’t start with the shutdown for Genese Rollins’ family. The Waldorf resident said the school-issued laptop was not working for her seventh-grader and he had to use her MacBook. However, she said the school system did well with providing brand new laptops for high schoolers.

“But my middle schooler’s computer didn’t even let me connect to Synergy,” she said. “As a parent, I just want to tell you, I want my kids back in school.”