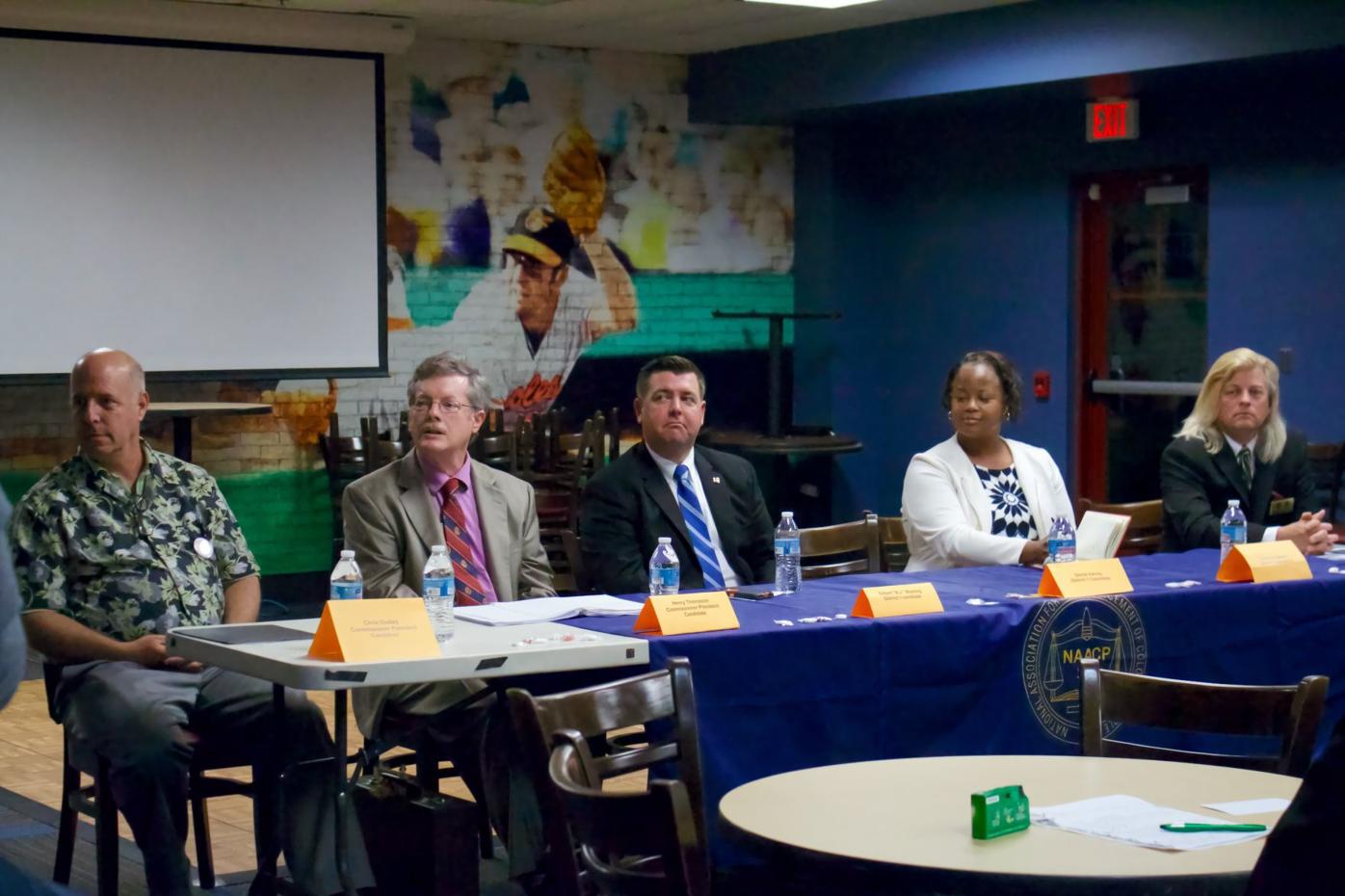 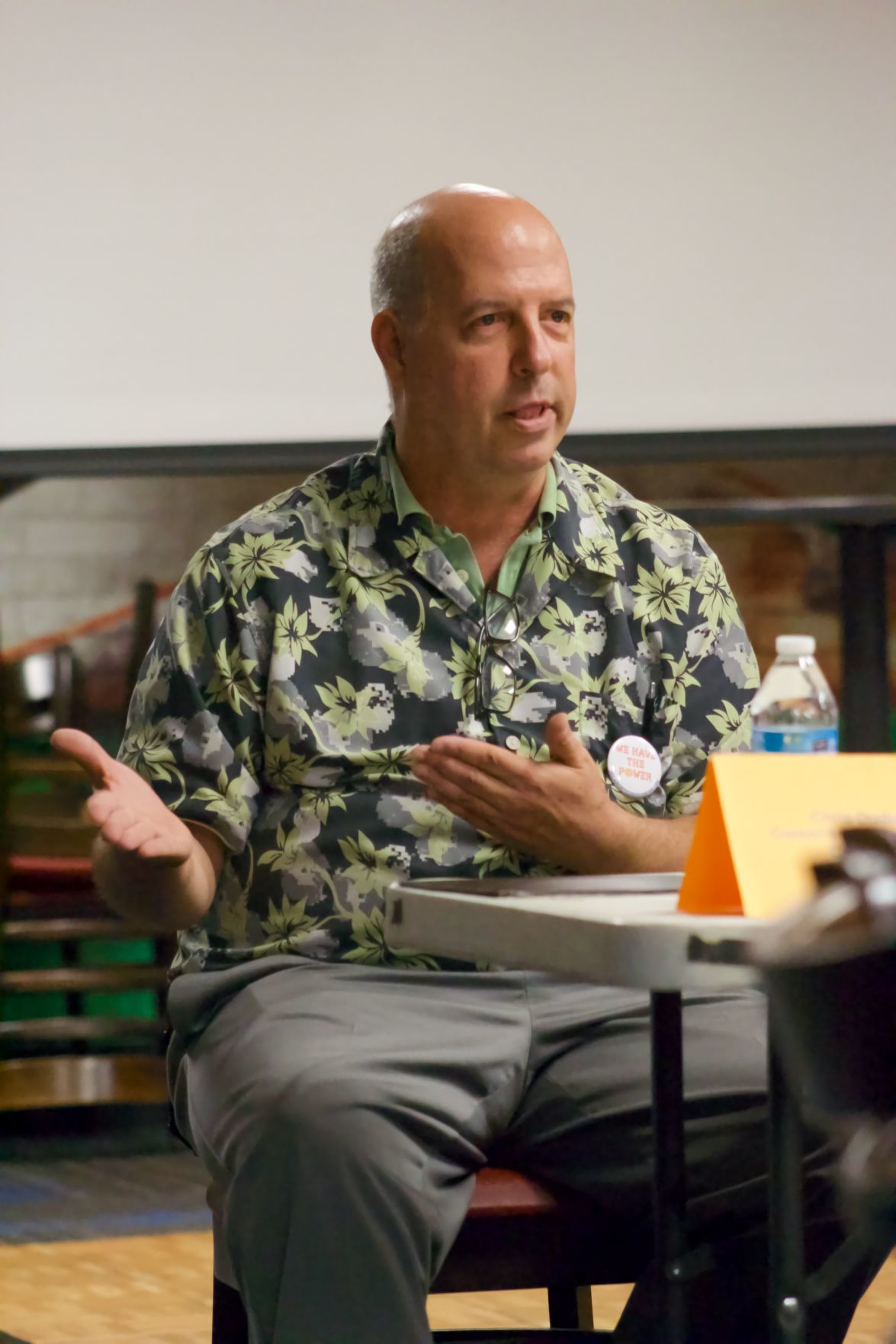 Chris Dudley, the Green candidate for county commissioners’ president, makes a point at Thursday’s forum sponsored by the Charles County chapter of the NAACP. 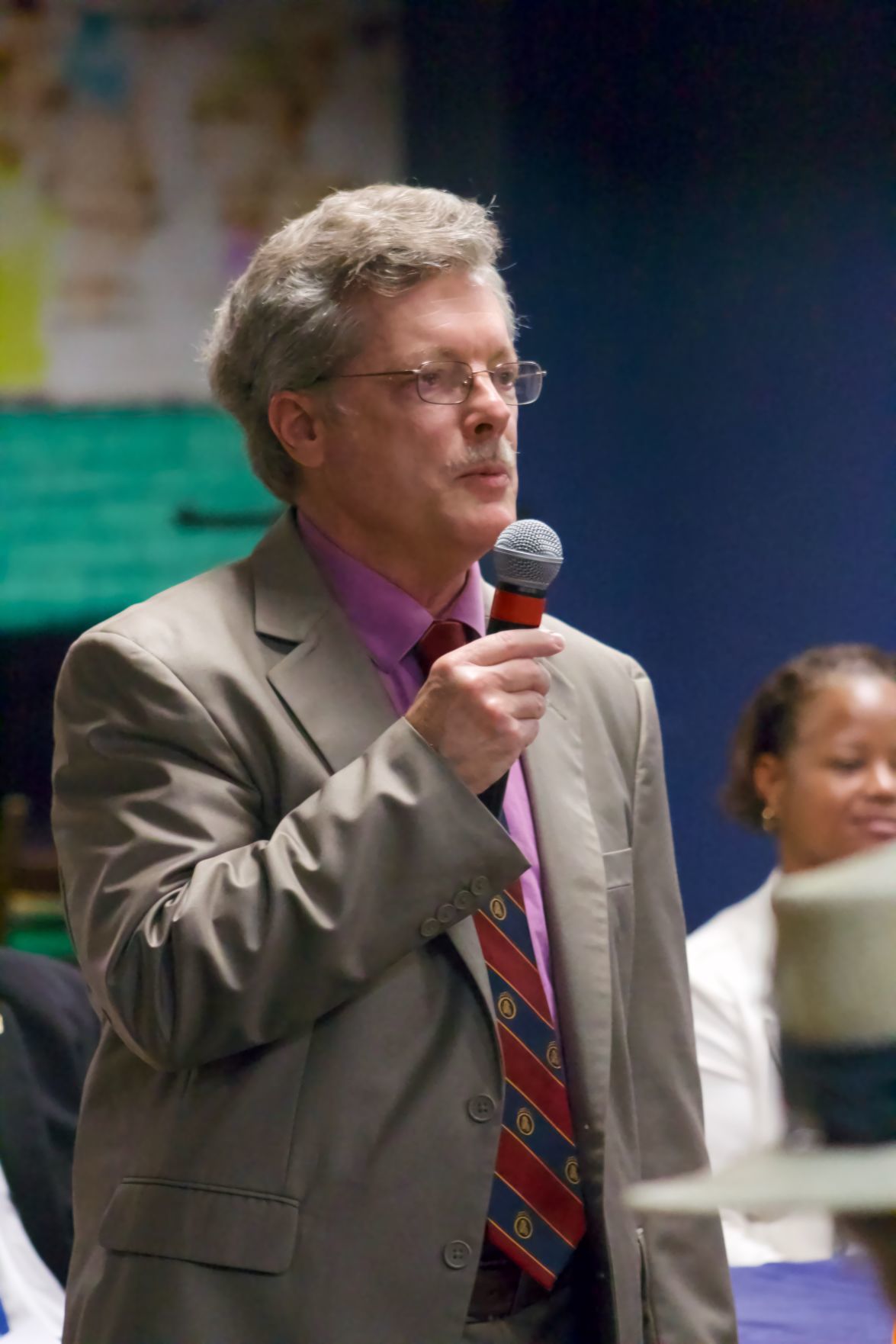 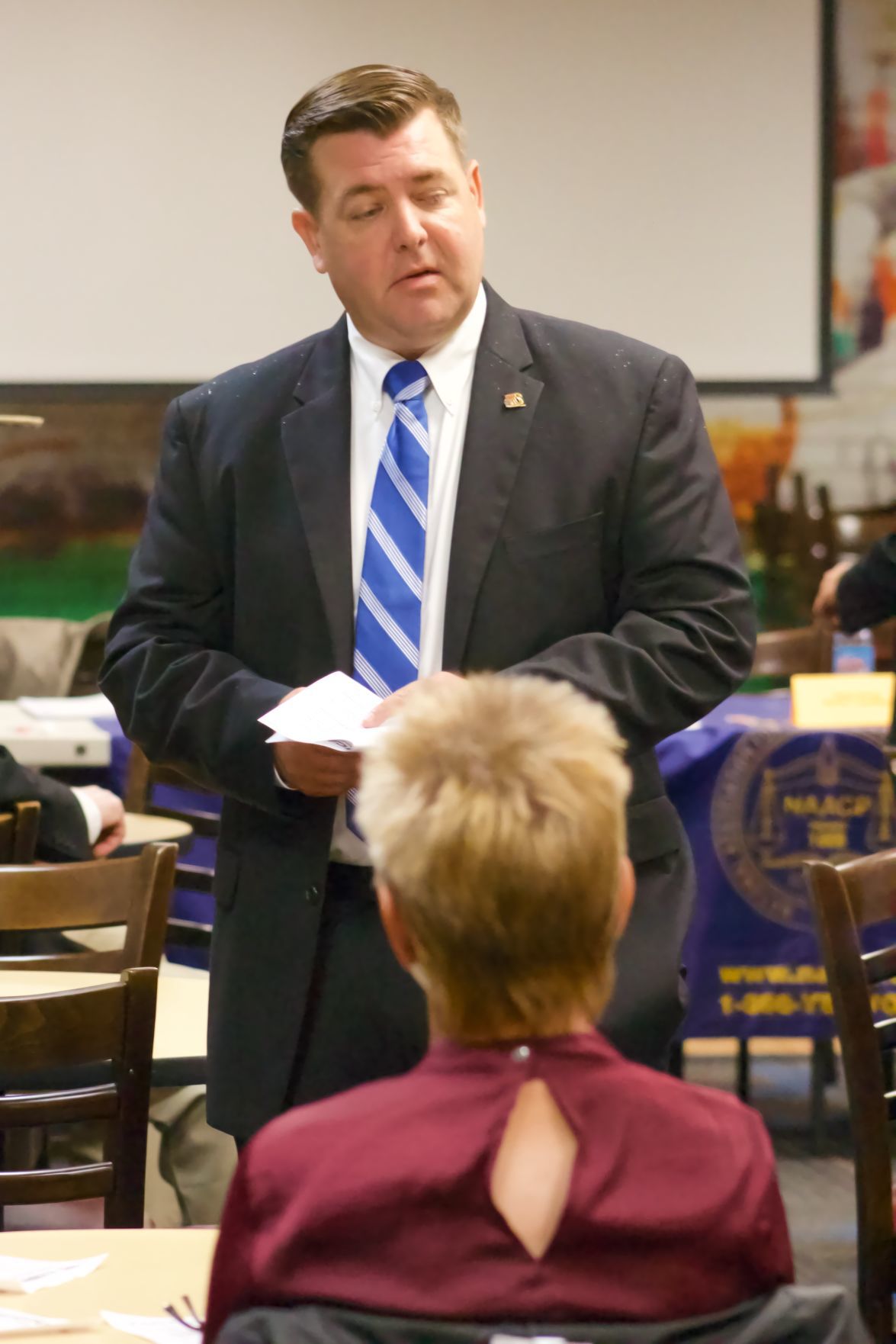 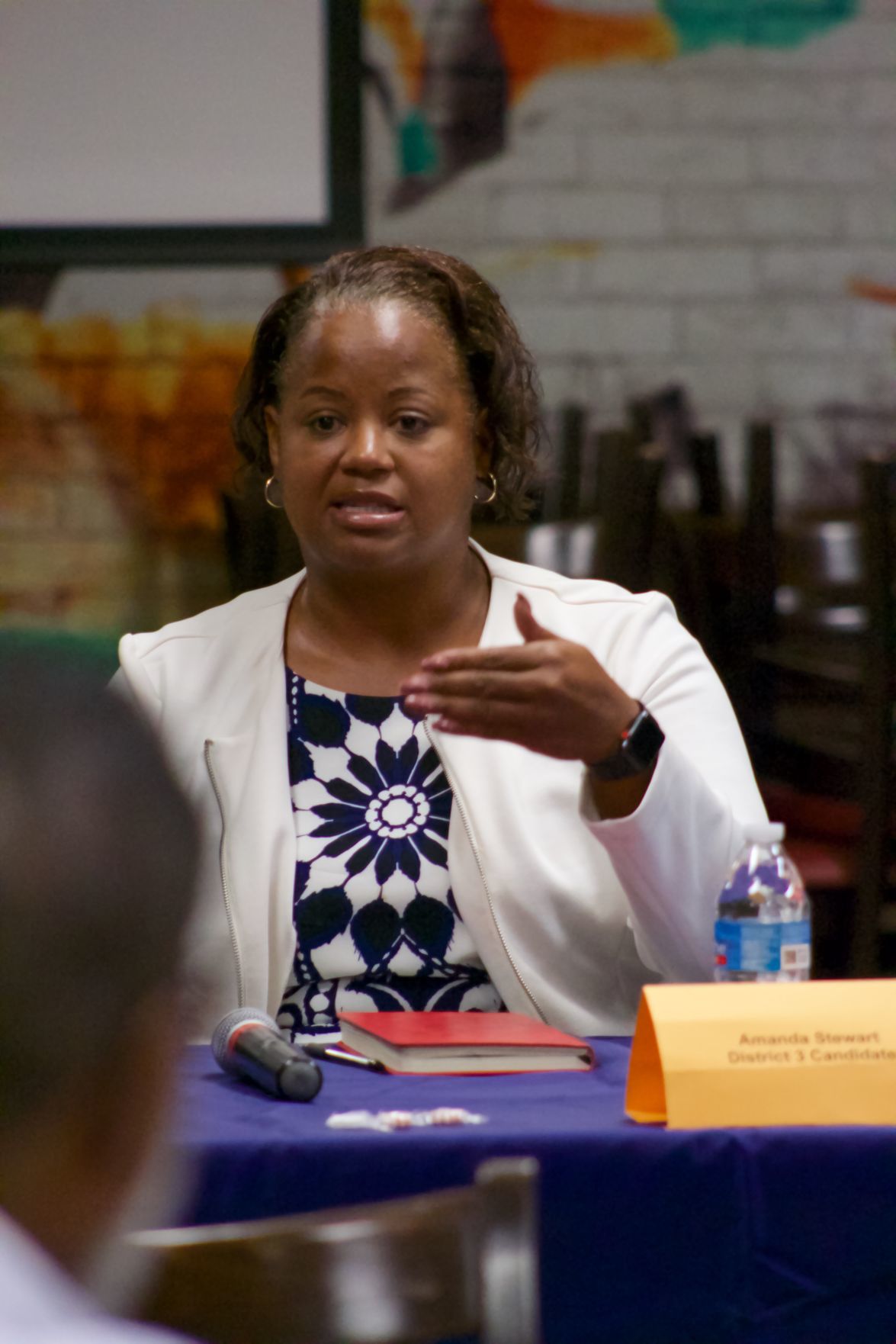 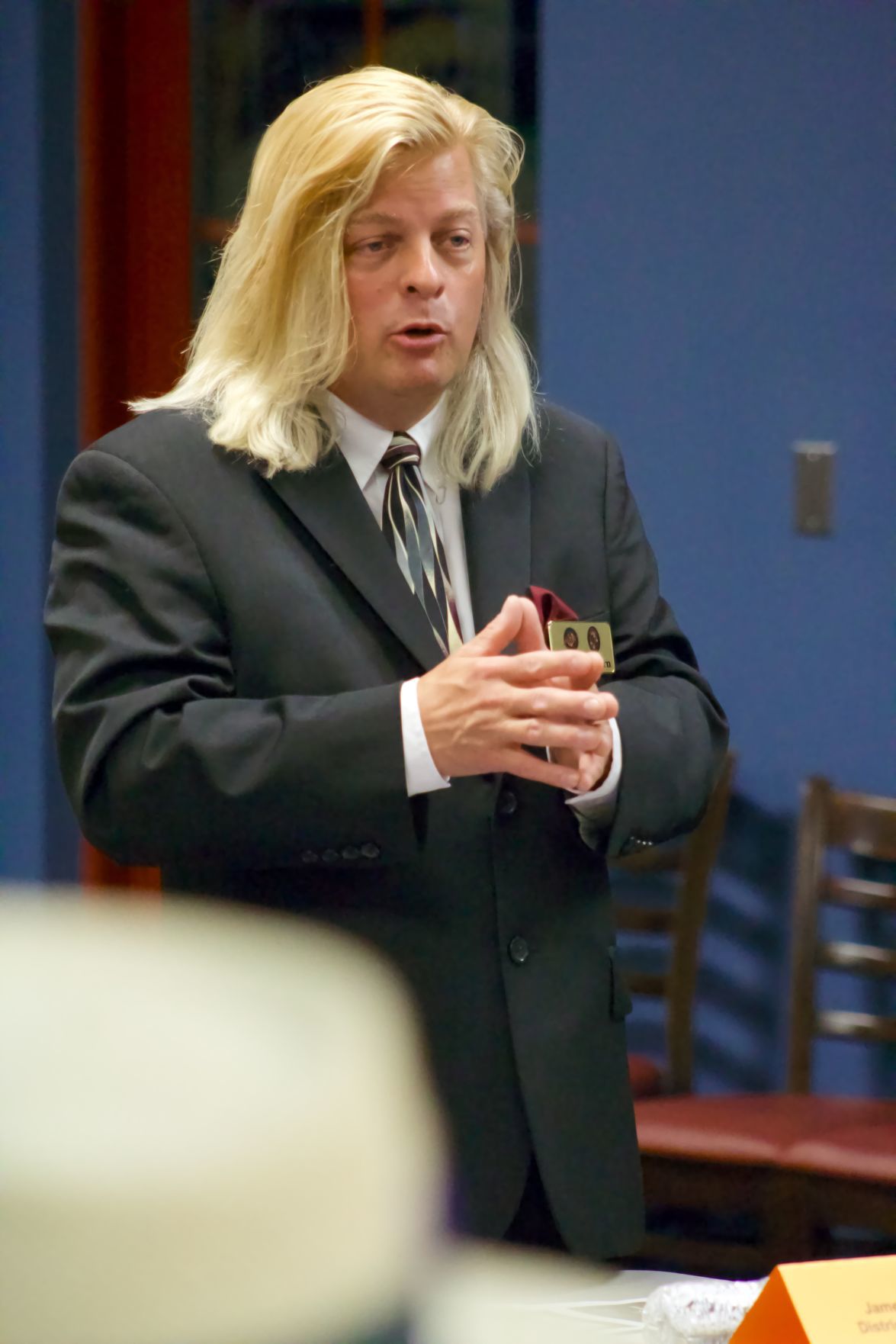 Republican candidate for District 4 Commissioner James Ashburn was one of five candidates who participated in Thursday’s forum sponsored by the Charles County chapter of the NAACP.

Chris Dudley, the Green candidate for county commissioners’ president, makes a point at Thursday’s forum sponsored by the Charles County chapter of the NAACP.

Republican candidate for District 4 Commissioner James Ashburn was one of five candidates who participated in Thursday’s forum sponsored by the Charles County chapter of the NAACP.

Five of the 11 commissioner candidates participated in the forum, which took place in the Legends Clubhouse at Regency Furniture Stadium in Waldorf. Around 40 people attended.

Funding for education and services for the county’s youth and homeless populations were also among the issues discussed during the two-hour event.

Throughout the evening the candidates observed moderator Wanda Woodland’s stricture on directly challenging other candidates, and in fact on several occasions they found opportunities for agreement on key issues.

Candidates had two minutes to answer questions submitted in writing by the audience. Toward the end of the forum, Woodland shortened the response times to squeeze in more questions.

The first question, asking candidates to identify what they saw as the biggest challenge facing Charles County today, established one of the recurring themes for the evening — how transportation and economic development affect each other.

Republican candidates Henry Thompson, who is running for commissioners’ president, and James Ashburn, running for the District 4 seat, argued that the county’s most pressing need was to diversify its tax base by getting more businesses to launch or relocate here.

Democratic District 1 nominee Gilbert Bowling tied both issues together, arguing that while he believed the need for more good paying careers in the county was the most crucial issue, having more local jobs would mean fewer commuters on the county’s main arteries.

Stewart and Ashburn, who are running to represent the heavily urbanized districts in the north of the county, identified transportation as the No. 1 issue facing their particular districts, though Stewart, a science teacher in the Prince George’s County school system and the mother of an eighth-grader, also singled out overcrowded schools as a pressing issue.

Stewart, who is running unopposed, pointed to her efforts to get funding to build new schools and renovate older ones.

“That doesn’t just happen by chance,” she said. “You have to plan for it.”

Bowling, who is running to represent the largely rural District 1, identified access to high-speed internet as the most important issue facing that district.

“A lot of people in District 1 want to be left alone, but they also want urban amenities,” Bowling said. “And that poses challenges.”

Asked how they would work with fellow commissioners to balance out competing concerns, both commissioner president candidates emphasized the importance of finding ways to work together.

Dudley pointed to his experience finding consensus among competing goals as president of a high school arts booster organization.

“We may not always agree on how [something] happens, but that’s how you behave as president,” Dudley said. “You’re serving your fellow commissioners to make things go forward.”

Thompson stressed the importance of team building and a reliance on fact-finding committees.

“We need to coordinate amongst ourselves and come to a consensus,” Thompson said. With regard to fact-finders, “Commissioners will rely on them, so need to encourage them to do the best they can.”

An audience member asked the candidates to address the question of why the board of commissioners never completely fund the budget requested by the Charles County Board of Education.

“Education is extremely important, but we seem to have a school board that represents whatever [Superintendent] Kimberly Hill wants,” Ashburn said. He added that teachers were forced to spend too much time dealing with disciplinary problems, which results in good students being neglected.

Stewart said that the school budget represents the system’s complete “wish list,” and that it’s up to the board of education to establish priorities for funding that the commissioners then vote to carry out.

“There’s always room for improvement, but as a commissioner our role is to support the board,” she said.

Dudley said that by passing “responsible” school budgets, the commissioners were helping to maintain the county’s AAA bond rating, a theme Dudley returned to throughout the evening as vital for ensuring a stable economic base on which to build a diversified tax base.

Pressed on whether they would be willing to raise property taxes in order to provide more funding to the school system and law enforcement, most of the candidates talked about looking for ways to streamline the existing budget before resorting to tax increases.

Bowling candidly said that he could not definitely say whether or not he would until he’s had a chance to look at the budget, but that he would “go through looking for every dime” that could be saved first.

“If we have to [raise taxes] to keep kids safe and pay for the Charles County Sheriff’s Office, then I will do it,” Bowling said.

Thompson said that the western part of the county represented a dormant economic engine that the county should focus on getting “pepped up” to generate the tax revenue that could be used to fund law enforcement and other first responder agencies.

“We need to get that part of the county going so that the steam engine starts to work for the county,” he said.

Woodland combined several questions about the controversial Watershed Conservation District into a single one, asking candidates to state their positions on it.

Dudley unambiguously supported it, saying that it would help the county “hold the line on taxes” and spur economic development by killing sprawl development. Stewart, who had voted in favor of it as commissioner, also supported it but admitted that the commissioners had failed to explain its benefits and what can be built there.

Bowling said he believed that the overall intent of the WCD was good, but that some of its policies needed to be “mended.”

Thompson and Ashburn came down against the WCD, citing what Thompson called the “very onerous” limitations on homebuilding on land in the WCD zone. Ashburn added that the WCD would hamper the development of the Maryland Airport in Bryans Road.

At one point, Ashburn criticized the commissioners for seeking raises for “only working two days a week.”

The current commissioners voted earlier this year to reduce the number of public open sessions to alternating Tuesdays, and also voted to grant the incoming board a series of step increases to their salaries.

Only the commissioners’ president position is a full-time job.

“They need to be on the phone trying to attract business instead,” Ashburn said

Stewart challenged Ashburn’s assumption, saying that she had to address “the elephant in the room” and dispel the widespread belief that commissioners only work when they are holding a public session.

“My husband and son are here and they’ll tell you that I do commissioner’s work at least five days a week,” she said. “To insinuate that I only work two days a month is ridiculous.”

Bowling, who like Stewart works in Prince George’s County but lives in Charles County, agreed with Stewart.

“Just because we have another job doesn’t mean we can’t commit to the county,” Bowling said.

In their closing statements, each of the candidates summed up their positions and asked for voters’ support on Nov. 6.

Ashburn emphasized the need for commissioners to work with the county’s state and federal delegations to bring in funding for transportation and commercial development. Stewart emphasized the need to support businesses by shopping locally. Thompson discussed his long family roots in the county and Dudley mentioned his science background. Bowling focused on the elements that the candidates had in common.

“We all come from different backgrounds, and part of bringing a community together is working with people who don’t look like you or move in the same circles as you,” Bowling said. “All of us want to leave the county a better place for the next generation.”