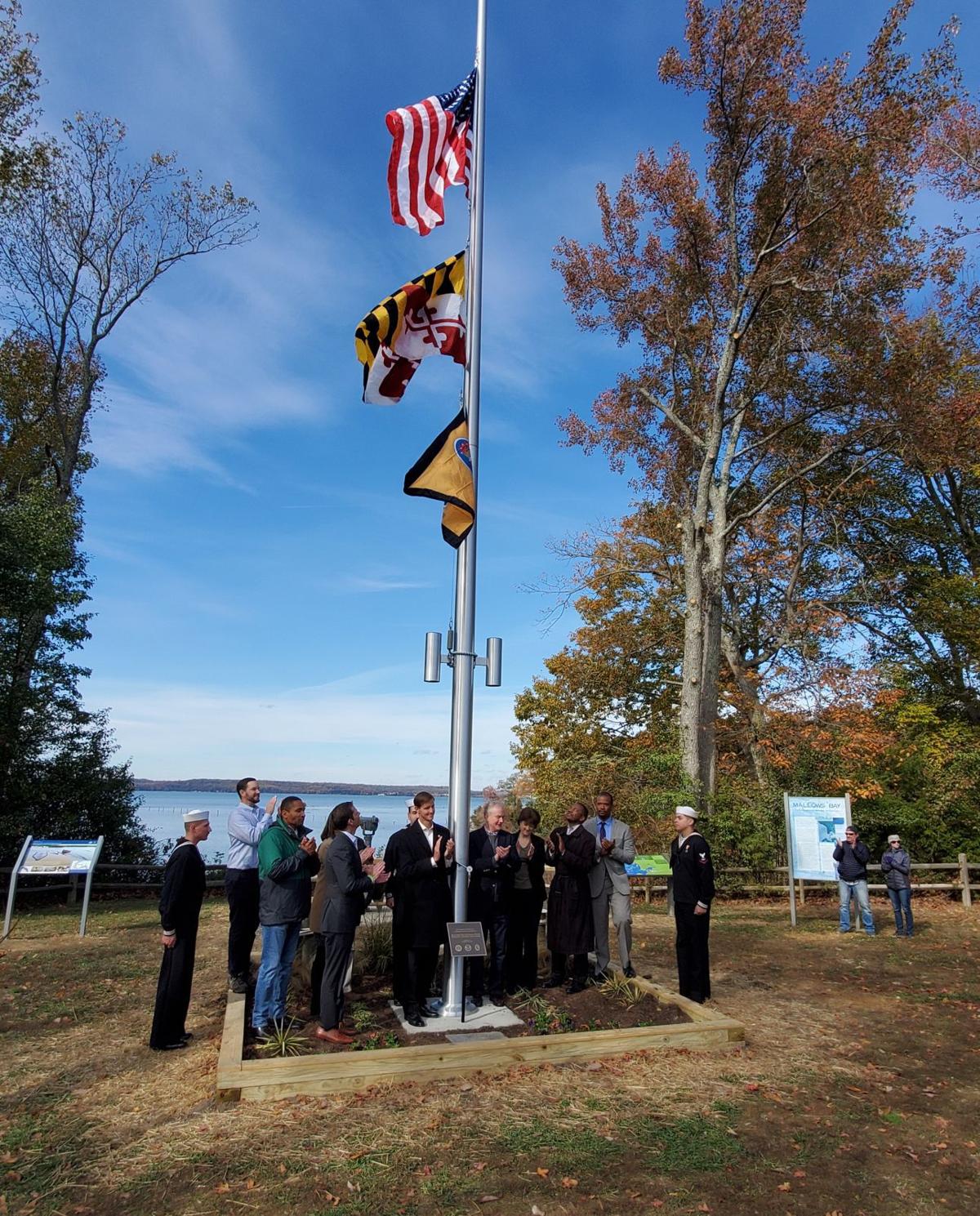 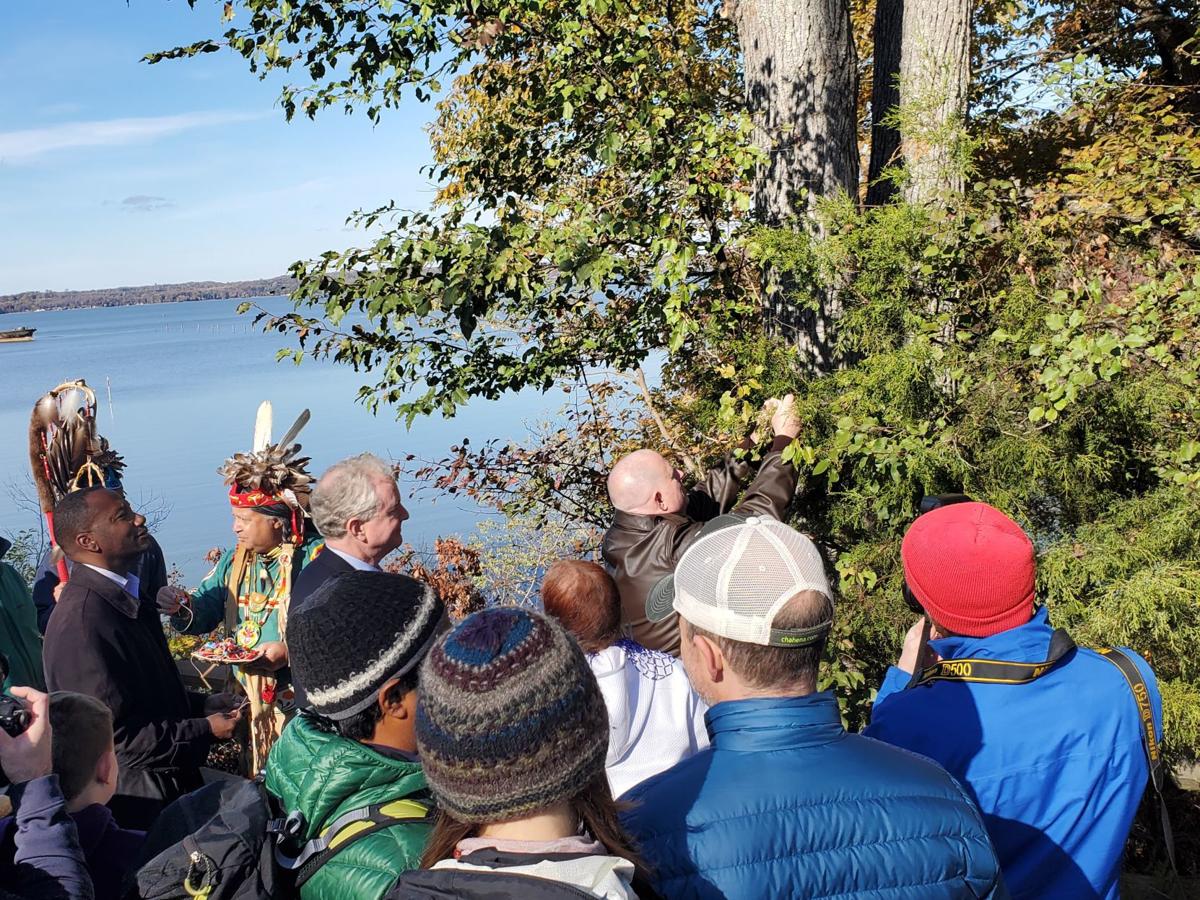 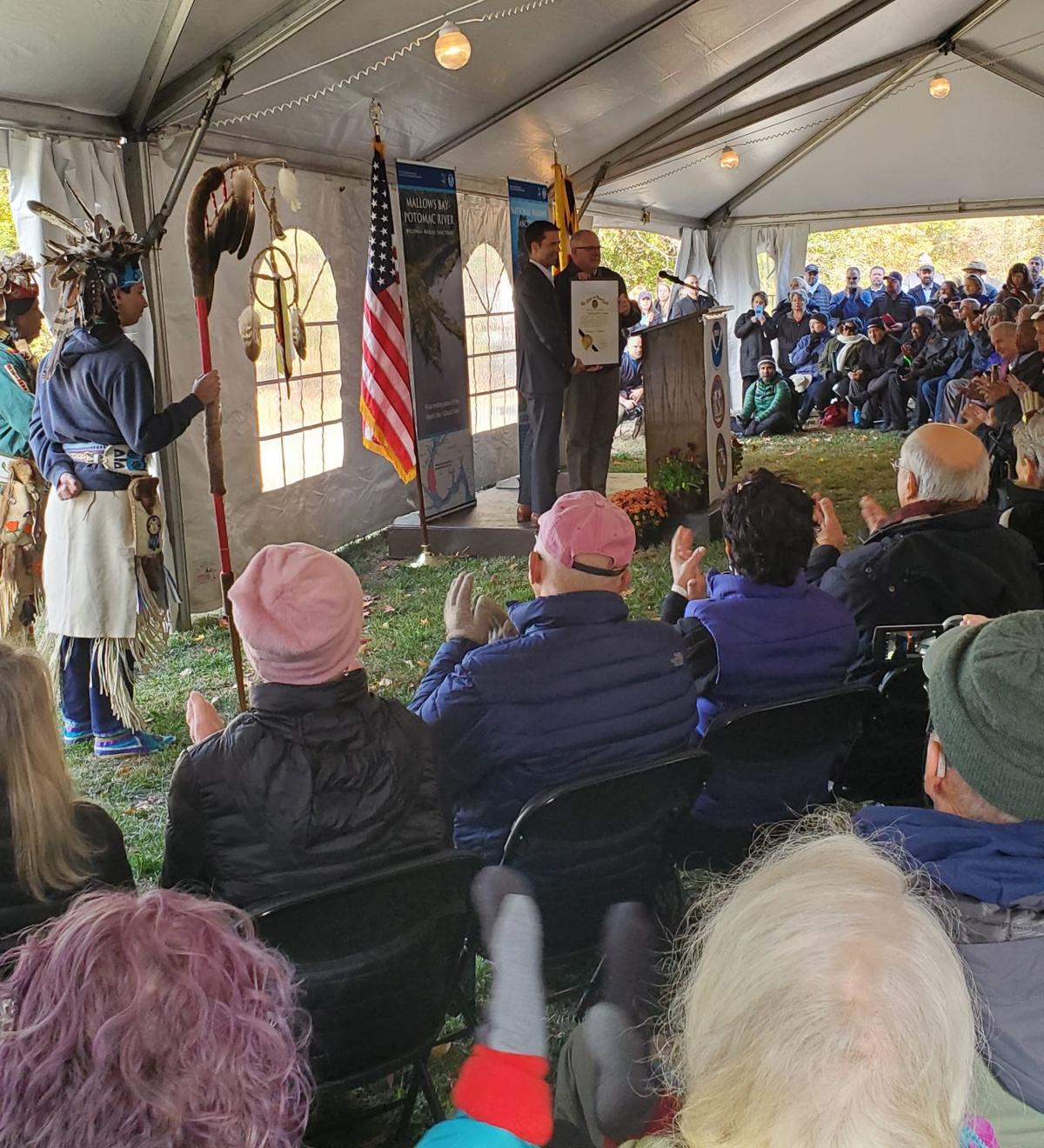 Hogan presents an official state proclamation to Neil Jacobs, NOAA’s assistant secretary of commerce for environmental observation and prediction, during a tent-enclosed dedication ceremony near the scenic waters at Mallows Bay Park.

Hogan presents an official state proclamation to Neil Jacobs, NOAA’s assistant secretary of commerce for environmental observation and prediction, during a tent-enclosed dedication ceremony near the scenic waters at Mallows Bay Park.

Hundreds of residents, community leaders, elected officials, congressional representatives and other dignitaries gathered on park grounds at Mallows Bay-Potomac River on Saturday in Nanjemoy to celebrate its designation as the nation’s 14th, and Maryland’s first, national marine sanctuary since 2000.

“This is the first sanctuary in nearly 20 years and the first one in the Chesapeake Bay region,” Sammy Orlando, the Chesapeake Bay regional coordinator for the National Oceanic and Atmospheric Administration’s Office of National Marine Sanctuaries, said as he gave opening remarks during a dedication ceremony held inside of a tent near the scenic waters. “In 2014, NOAA asked communities across the country to nominate special places in the marine and great lakes waters for consideration as national marine sanctuaries. The Chesapeake community was ready — within six months and under the leadership of Charlie Stek, a broad and diverse coalition nominated this area to protect and preserve the Ghost Fleet and the original cultural heritage dating back to thousands of years.”

The Mallows Bay-Potomac River National Marine Sanctuary, which encompasses an 18-square-mile area along the county’s western shore, was established earlier this year to protect remnants of more than 200 abandoned warships dating as far back as the Civil War. The sanctuary includes Native American sites, remains of historic fisheries operations as well as Revolutionary and Civil War battle-scapes, most of which were documented in an episode of “It’s How You Get There” on the History Channel.

Mallows Bay is perhaps most famous for being the home of the “Ghost Fleet,” having over 100 wooden merchant steamships built during World War I and subsequently scuttled in the bay in 1925. Although the Ghost Fleet ships never saw action, their construction at more than 40 shipyards in 17 states reflected the massive national wartime effort that drove expansion and economic development in many communities.

Today, nature has reclaimed those ships and the overgrown wrecks provide habitat for fish, beaver and a variety of birds including osprey, bald eagles and blue heron, according to a program brochure.

“We have just about anything you could imagine. It is the largest assemblage of historic watercraft on the western hemisphere and possibly the world, dating from at least 1776 until 1973,” said Donald Shomette, a historian who wrote a book based on the Ghost Fleet. “Right here at Mallows Bay, we have the roots of American history with the building of this World War I fleet which galvanized America into one unit. … We’re standing on Civil War grounds. We’re standing on 12,000 years of Native American history. … This is an experiment that is going to go on for many years and it’s a wonderful resource for the state of Maryland. It’s going to mean a lot for our tourist industry, the economy and a lot of things.”

NOAA gave its thumbs-up on July 8, which also appeared in the Federal Register that same day, following a 30-day period during which the public was invited to comment on the agency’s 300-page final environmental impact statement and management plan for the sanctuary. The statement noted that Mallows Bay’s designation was necessary because of “ongoing threats to the maritime cultural heritage resources in this area of the Potomac River.”

“Because of your efforts to protect and preserve Mallows Bay, Americans will have the opportunity to explore and learn about the past for generations to come,” Council on Environmental Quality Chairwoman Mary Neumayr said. “With so much American, military and maritime history to be explored, it’s only fitting that we’re here to celebrate this designation as a national marine sanctuary on Veterans Day weekend.”

U.S. Sen. Chris Van Hollen (D-Md.) has been a vocal advocate of the designation and recently announced nearly $6.14 million in federal funding for ocean education and outreach efforts, part of which will go to Mallows Bay, according to a press release.

Through his role on the Senate Appropriations Committee, Van Hollen has fought to protect funding for NOAA which provides additional funds for the sanctuary. He is hopeful this designation will encourage tourists to visit from all over and support the protection of other tributaries throughout Maryland.

“We are very, very proud that NOAA has its home in our state,” Van Hollen said. “That history and heritage is very important to preserve and tell the stories of Maryland and this region, and really of the country.”

Catherine McCall, director of the Maryland Department of Natural Resources’s Office for Coastal and Ocean Management, told the Maryland Independent back in July that opportunities for education and recreation at Mallows Bay were among the most requested features from the public. She said it’s been great to “hear what the sanctuary means” to so many people and now “the real work is just starting.”

“This is one of the most important events that has ever occurred in the history of Charles County, Maryland,” Charles County Commissioners’ President Reuben B. Collins II (D) said. “Think of a comparable that has given our county this type of international exposure. … We recognize, rather selfishly as a local government, what this could potentially bring to us in terms of tourism dollars and economic development. This is significant; this is a great day for Charles County, for the region and for our nation.”

The county will manage Mallows Bay jointly with NOAA and the state of Maryland. Natural resource management will be handled by the Maryland Department of Natural Resources and the Potomac River Fisheries Commission.

Saturday’s ceremony concluded with a separate dedication for the sanctuary’s new flagpole led by Neil Jacobs, NOAA’s assistant secretary of commerce for environmental observation and prediction, and retired U.S. Navy Rear Admiral Tim Gallaudet who acts as both the deputy NOAA administrator and assistant secretary of commerce for oceans and atmosphere.

For Gov. Larry Hogan (R), who presented an official state proclamation to Jacobs in honor of the occasion, designating Mallows Bay as a national marine sanctuary is just another example of stewardship displayed by his administration.

Hogan said he is thrilled to have a national treasure on state grounds as this designation will not only preserve its history, cultural heritage and natural resources, but also “ensure that people from both Maryland and beyond will have the opportunity to experience this amazing site for years to come.”

“The very first national marine sanctuary in Maryland history, and the very first one to be designated anywhere in the nation in nearly two decades. That’s a pretty big deal,” Hogan said. “As a result of this successful partnership, we are preserving the remains of more than 100 World War I-era steamships and vessels, along with ships dating back to the Civil War and the Revolutionary War, and other artifacts that are nearly 12,000 years old.”

“The Mallows Bay landscape truly tells the story of our beginnings, of our struggles and our progress as Marylanders and as Americans,” Hogan added. “Through this designation, we are ensuring that this national treasure will be preserved for years to come.”