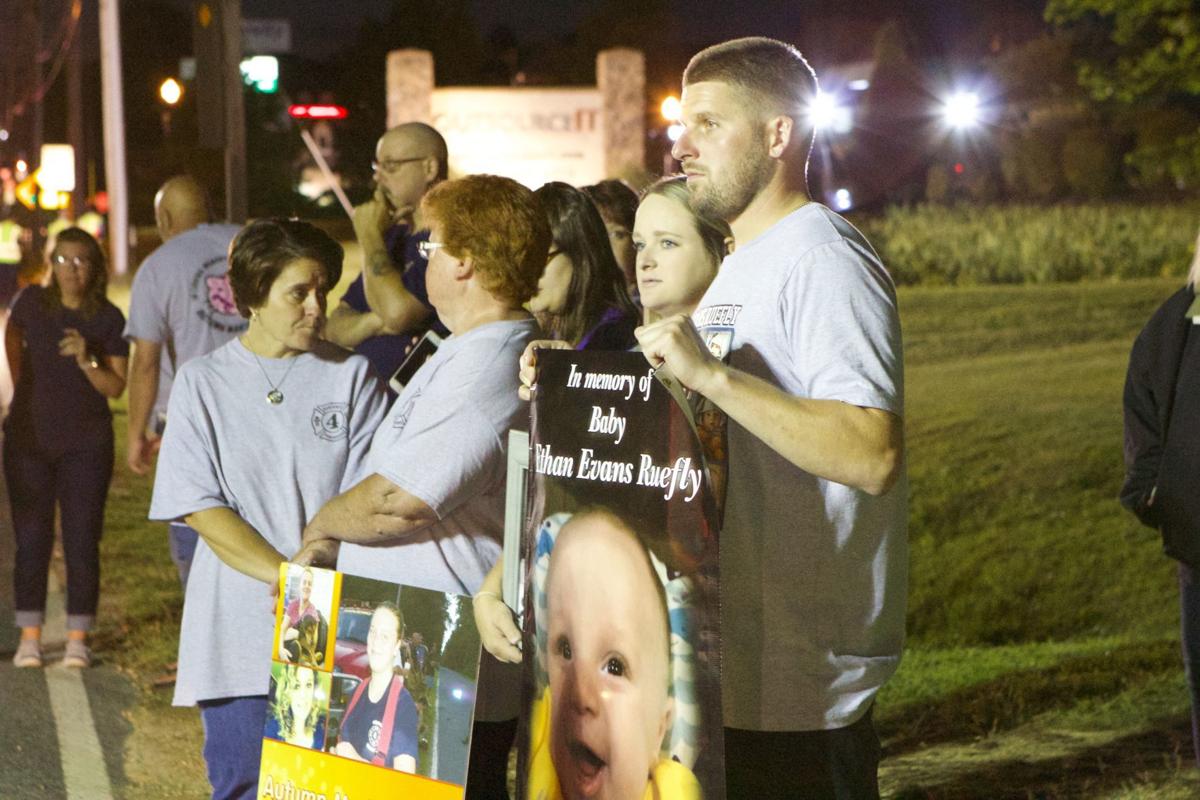 Tori Willett and Johnathon Ruefly, right, hold a sign in memory of their 2-1/2-month-old son Ethan, who was killed by a drunk driver in 2018, next to a sobriety checkpoint in La Plata last year. 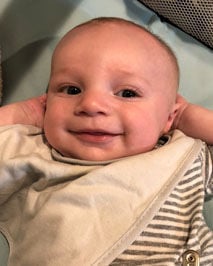 When Michael Maurice Ford plowed his Penske truck into a Jeep and killed Ethan Evans Ruefly in 2018, it was the middle of the day and he was working at his job as a delivery driver, and he was three times over the legal blood alcohol content limit.

For that, he received the maximum sentence allowable by law Thursday: 10 years.

Ford, a 50-year-old Columbia resident, appeared in a packed courtroom before Charles County Circuit Court Judge H. James “Jay” West for sentencing. The jury in his trial had returned a mixed verdict when he was found guilty Oct. 7 last year of negligent vehicular manslaughter, vehicular homicide while under the influence of alcohol and alcohol per se and related charges of driving under the influence. He was found not guilty of attempting to flee the scene of the May 7, 2018, accident in Waldorf.

The Maryland Independent previously reported that Ford was driving drunk while on the clock and on his way to make an office furniture delivery at the College of Southern Maryland shortly before 4 p.m. when he drove his Freightliner box truck into the back of a Jeep Wrangler, pushing the Jeep into another car nearby.

The adults involved only suffered minor injuries, but 3-month-old Ethan, who was in the Jeep with his parents, was barely breathing and unresponsive when first responders arrived. He was airlifted for treatment, succumbing to his injuries at Children’s National Medical Center three days later. In the trial, Ford’s public defenders, Cynthia Frezzo and Derrick Johnson, had contended baby Ethan wasn’t killed by the crash but by other factors afterward, including improper intubation by emergency medical service workers.

The side behind the prosecutors’ table was entirely packed with family and friends of baby Ethan and his parents Jonathan Ruefly and Victoria Willett, many of whom wore pictures of Ethan pinned to their lapels. Family and friends also turned out in support of Ford’s side, with his wife sitting in the row behind him for the duration of the hearing.

The court received nine written victim impact statements, and in court heard from Ethan’s parents, one of his grandmothers and from Ford and his wife as well. Ruefly spoke first, addressing Ford directly and angrily.

“You took everything from us,” Ruefly began. He said that he’d struggled with “so much hate and anger” toward Ford since the accident, at one point saying he’d like to cross the aisle and “go over there and handle it myself.”

“I wish the worst for you. I honestly do,” Ruefly said.

Ruefly, along with Willett and his mother Barbara Hutchins in their own statements later on, expressed a wish for harsher drunk driving laws in Maryland. Though Ford wasn’t convicted of it, Ruefly said, he was certain he’d been trying to flee the scene on foot, rather than trying to use the bathroom with every intention of coming back as he’d said through his attorneys.

“I just hope you can really give it to him,” Ruefly said to West in asking for the maximum sentence. “He was running, we all know it.”

Hutchins spoke next, recalling the “screaming phone call” she got from her son that day telling her what had happened. She’d traveled from Florida to be with the young family in the hospital, she said, and recalled being there for the worst of it.

“You’ll just never know, hopefully, what it was like to hand Ethan over to the morgue,” Hutchins said.

Recently, she recalled, she’d been dusting her home one day and as her thoughts wandered, she began to think of all the firsts Ethan never got to experience: He was so young when he died, Hutchins said, that he’d never even received a first pair of shoes.

The maximum sentence, Hutchins conceded, is “never going to bring Ethan back,” but “something’s got to stop with all this drinking and driving.”

Willett noted that the sentencing hearing fell a little more than a month shy of what would have been Ethan’s second birthday. The relatively lax penalties for crimes like Ford’s, she said, are proof that “the justice system favors the criminal and puts the victim on the back burner.”

They’ve had another child since Ethan was killed, Willett said, a daughter. Willett spoke of how much she hated being asked if their daughter is their first child: That question, she said, always leads to a conversation that never gets any easier to have.

“Ethan is now a shadow figure in our family pictures,” she said.

Her son is dead, Willett said, “all because of the selfish actions of another person. ... No one else poured alcohol down his throat and made him get in.” Like Ruefly, Willett said she has struggled with a deep anger ever since that day, along with constant fear and anxiety. The sight of a Penske truck, she said, “makes me sick to my stomach.”

Handing Ford the maximum sentence, Willett said, “will never be enough, but it will restore some faith in the justice system.”

Assistant State’s Attorney Tiffany Campbell said it’s “unfortunate” the maximum penalty is only 10 years in this case. She highlighted how Ford had gone “off the grid for several hours” while he was supposedly working, instead stopping in a shopping area where there was a liquor store.

Others that day had witnessed Ford driving erratically near the Prince George’s County line, Campbell said. She added that substance abuse was a recurrent issue for Ford, noting his previous stints in “at least six” rehabilitation facilities.

“If this case does not warrant the maximum sentence, the state is not sure what would,” Campbell said. “This is the time for punishment and punishment alone.”

Deputy State’s Attorney Karen Piper Mitchell called Ethan’s death “beyond tragic” and “unbearable.” Ford, she noted, had a .24 BAC by the time he was tested at Maryland State Police’s La Plata barrack after being taken into custody. The legal limit for drivers in Maryland is .08 BAC.

Between his previous stays in rehab and the facts of the case, Piper Mitchell contended the maximum, however she may feel about the length of time itself, was the most appropriate sentence.

“Ten years for this kind of crime being the maximum is ridiculous,” Piper Mitchell said before gesturing to the gathered crowd. “These people here represent the community, and the community is asking that 10 years is appropriate.”

While Ford’s defense attorney Johnson said he recognized Ethan’s death was tragic, Ford is “a human being, not a monster.” He’d indeed had a long history of struggling with substance abuse, one Johnson said runs in his family. Ford himself was introduced to that world as a child, Johnson said, and so it “ran in his blood.”

“He didn’t intend for this to happen,” Johnson said. “It wasn’t a choice. It was an unfortunate confluence of factors.”

Johnson pushed back against the state’s assertion that Ford showed no remorse, saying he was “really messed up about what happened” and has suffered himself from nightmares and anxiety since that day.

Ford addressed the court directly as well, saying to Ethan’s family he prayed God gives them the strength to forgive him one day.

“I love kids, man. This was not meant to be,” Ford said. “God said when you hurt the little ones you pay for it, and I hurted a little one.”

Ford’s wife spoke as well, saying to Willett that “mother to mother,” she was deeply sorry for her and her family’s pain.

“I apologize, and I feel your pain every day,” the woman said. “You’re never going to forget, but I hope this is something that heals.”

Before sentencing Ford, West said the case is one that has stayed with him and has cropped up from time to time in his thoughts, especially when he thinks of all the “first” moments Ethan and his parents were deprived of through his death.

“Tough cases like this come to the court more than they should,” West said. “But there’s something in this case that makes it different.”

His possession of a commercial driver’s license, along with the type of vehicle he was driving, should have caused Ford to take much, much more care that day, West said, noting that he felt the “position of trust” made it much worse.

“I often wonder in the age of Uber, who drives drunk?” West said. “There were 100 or more different times he could have made the decision to park that car. Because he did not, that child is not here.”

“When you think of drunk driving you normally think of someone who’s left the bar and had a little too much to drink, but here’s someone who while on his job is drinking and driving,” Charles County State’s Attorney Tony Covington (D) said of Ford in a phone call Friday. “He’s driving down the road, pounding beers, in rush hour into Waldorf. It was inevitable that something terrible and tragic was going to happen. I’m not sure anyone could have predicted it would be a three-month-old child, but if he didn’t get the maximum sentence, I mean, no one ever would. I’ve spoken on this issue generally speaking before. I don’t think the maximum sentence is high enough, but it is what it is and at least the judge did what he could do, as far as the maximum sentence.”

“This case involved a tragic accident with an especially dire result that, even the State’s Attorney acknowledges, no one could have predicted,” District Public Defender Michael Beach said of the verdict when contacted by email. “Accordingly, a lengthy prison sentence will not change what happened nor improve public safety in the future. While Mr. Ford did not get the maximum sentence sought by the State, because he was acquitted of charges carrying an additional ten years, the costs of his lengthy incarceration would be far better spent investing in community-based substance abuse treatment services.”