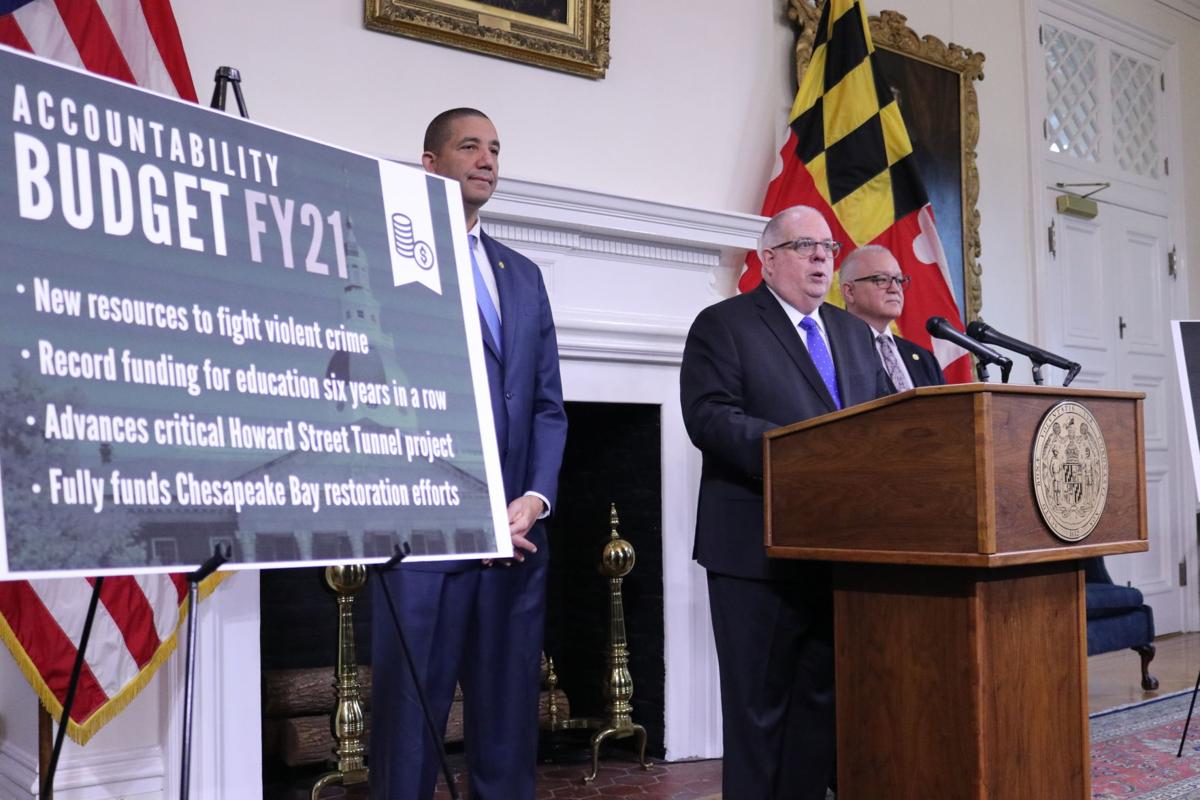 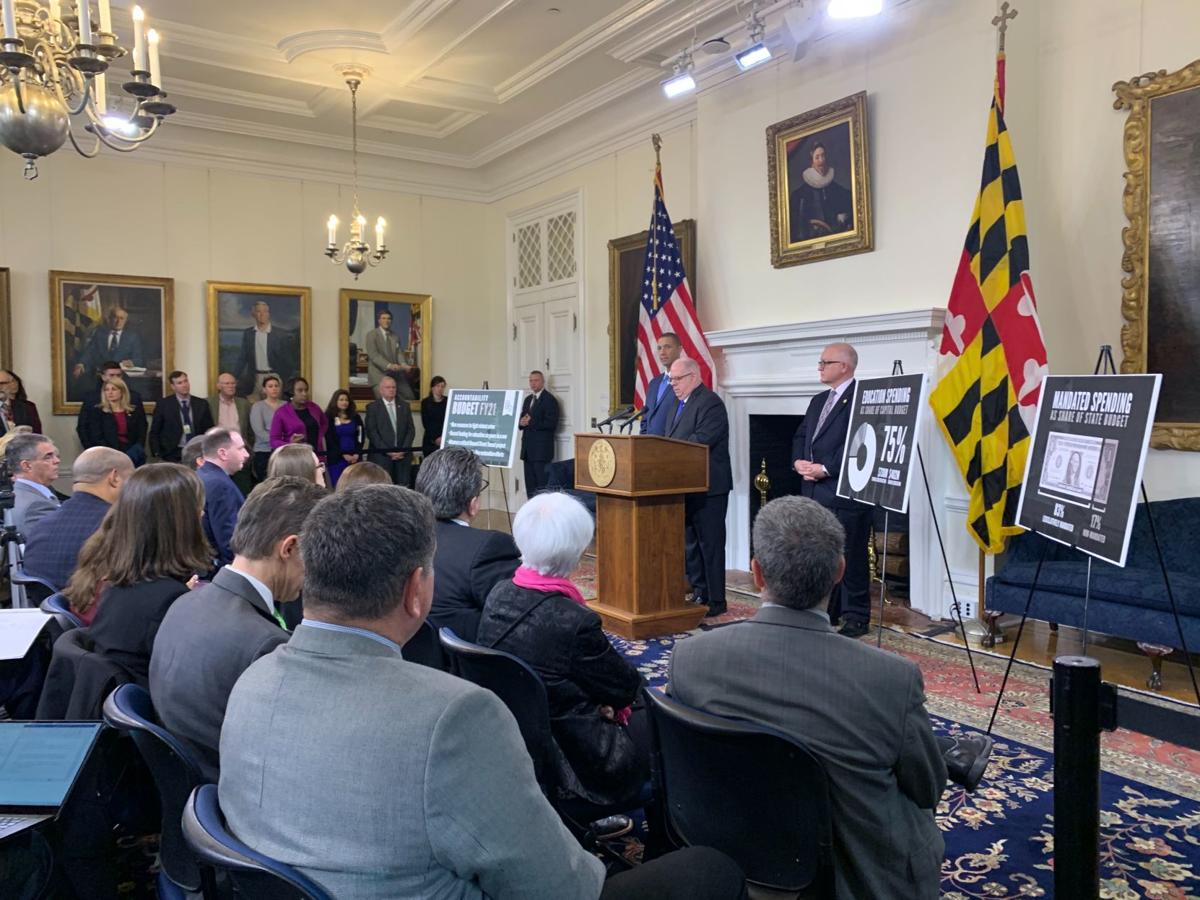 Gov. Larry Hogan (R) holds a press conference at the State House on Tuesday, Jan. 14, to reveal highlights of his fiscal 2021 state budget. 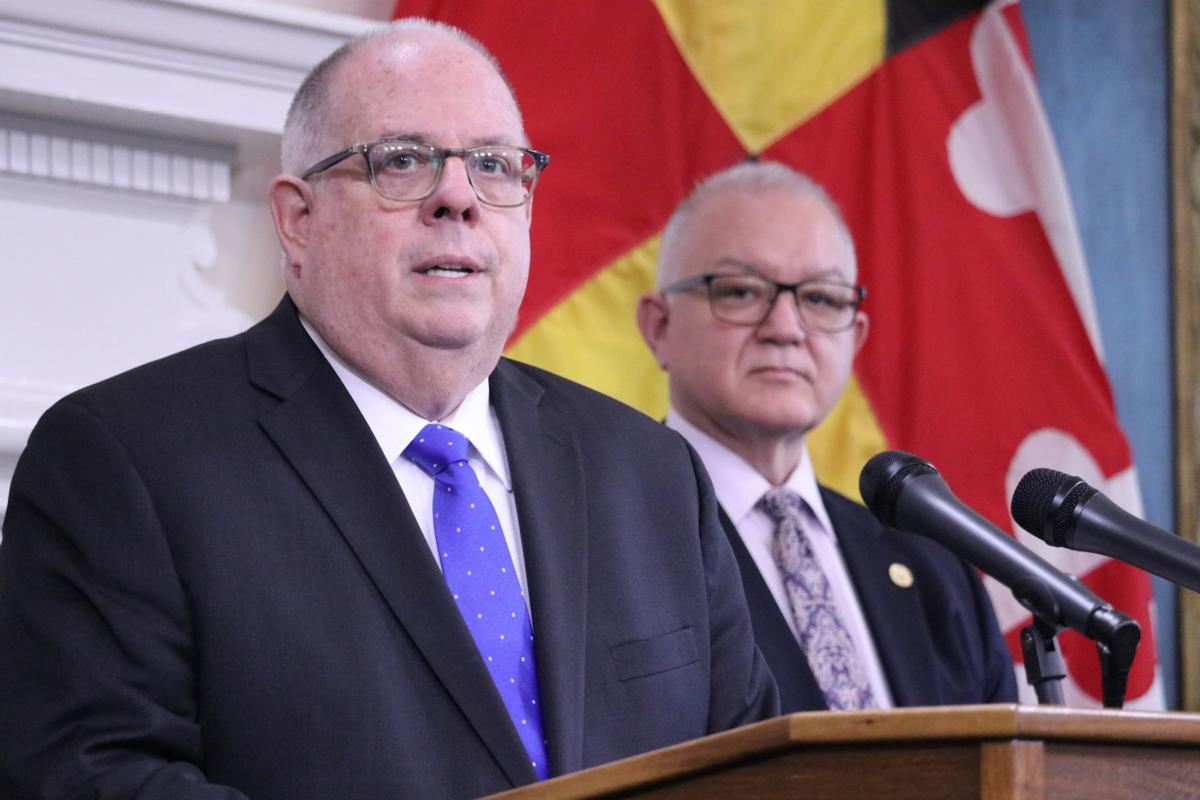 Gov. Larry Hogan (R) outlines his proposed $47.9 billion budget plan for the state of Maryland for the next fiscal year during a news conference in Annapolis on Tuesday, Jan. 14. Hogan highlighted funds to fight crime, improve education and protect the Chesapeake Bay. David Brinkley, Hogan’s budget chief, is standing at right.

Gov. Larry Hogan (R) holds a press conference at the State House on Tuesday, Jan. 14, to reveal highlights of his fiscal 2021 state budget.

Gov. Larry Hogan (R) outlines his proposed $47.9 billion budget plan for the state of Maryland for the next fiscal year during a news conference in Annapolis on Tuesday, Jan. 14. Hogan highlighted funds to fight crime, improve education and protect the Chesapeake Bay. David Brinkley, Hogan’s budget chief, is standing at right.

Gov. Larry Hogan (R) released the details of his “Accountability Budget” at a news conference on Tuesday morning. The full text of the $47.9 billion budget wasn’t expected until the next day, but Hogan touted the highlights that include a 1% increase in expenditures with no new taxes.

Hogan said his legislative package to fight violent crime in Baltimore is “the most important thing” legislators can do this session, emphasizing that it is the top concern of Marylanders, according to a recent poll.

“It would be outrageous if we cannot get that done,” Hogan said.

“Right now, we have to stop the bloodshed in the streets that is happening every single day.”

The line items coincide with legislation Hogan has said he would propose that would increase penalties for offenders who use or possess illegal guns and crackdown on witness intimidation.

He also proposed $2.6 million to fund 25 new prosecutors in the Maryland Office of the Attorney General who would handle violent crime, as well as $23 million for Project C.O.R.E, a state and Baltimore city initiative that demolishes blighted and abandoned buildings with the aim of revitalizing the city.

Education has long been expected to dominate this year’s General Assembly because of the Kirwan Commission's recommendations, and it dominates the governor’s proposed budget.

Hogan said Tuesday that his budget will provide $7.3 billion for K-12 schools in the state, going “above and beyond” funding formulas, as well as $94 million to expand access to pre-K. Education spending makes up about 75% of spending on new buildings and infrastructure in his proposed budget.

“No governor in the history of our state has ever invested more in K-12 education,” Hogan said. “But Marylanders are demanding, and we are pushing for, more accountability in our school systems to make sure those dollars are being well spent, they are making it into the classrooms and we are achieving better results for our children.”

“But we are grateful he is adhering to the budget mandates,” Guzzone said.

“This is about what we value the most. The education of our kids is at the very top of it.”

Guzzone had not seen Hogan’s proposals when he spoke to the Capital News Service on Tuesday afternoon but said he expects the budget process to “look pretty much like it does every year.”

Hogan’s budget will appropriate $80.3 million to pay for the expansion of the Howard Street Tunnel — a rail passthrough in Baltimore — to “break this major East Coast bottleneck.” The money will join $125 million in federal grant dollars to pay for the project, which will expand the tunnels to allow double-stacked rail cars through. Hogan said it would create thousands of jobs and increase production at the Port of Baltimore. The CSX freight railroad is also expected to pay for part of the cost.

Hogan said he has also allocated $57.2 million to the Chesapeake and Atlantic Coastal Bays 2010 Trust Fund and will contribute more than he is required — $242 million — to state reserves. That would leave $1.3 billion in reserves.

During a briefing with the Senate Budget and Taxation Committee meeting Tuesday, Dan White, an economist with Moody's Analytics, warned lawmakers about the risk of another recession, which he said could happen right around the end of the state’s 2021 fiscal year.

White said there is an “uncomfortably high risk” of another recession, citing the low unemployment rate and other economic indicators. White said the next recession would likely be less severe, but may take longer for the economy to recover.

“Recessions are not the end of the world,” White said. “It’s not armageddon.”

White said it may be a good time for the state to look at financing infrastructure to take advantage of current interest rates and to stimulate the state’s economy if and when the recession hits.

The official budget was expected to be released in its entirety on Wednesday. Both chambers of the General Assembly will likely make changes to it before it is finalized.