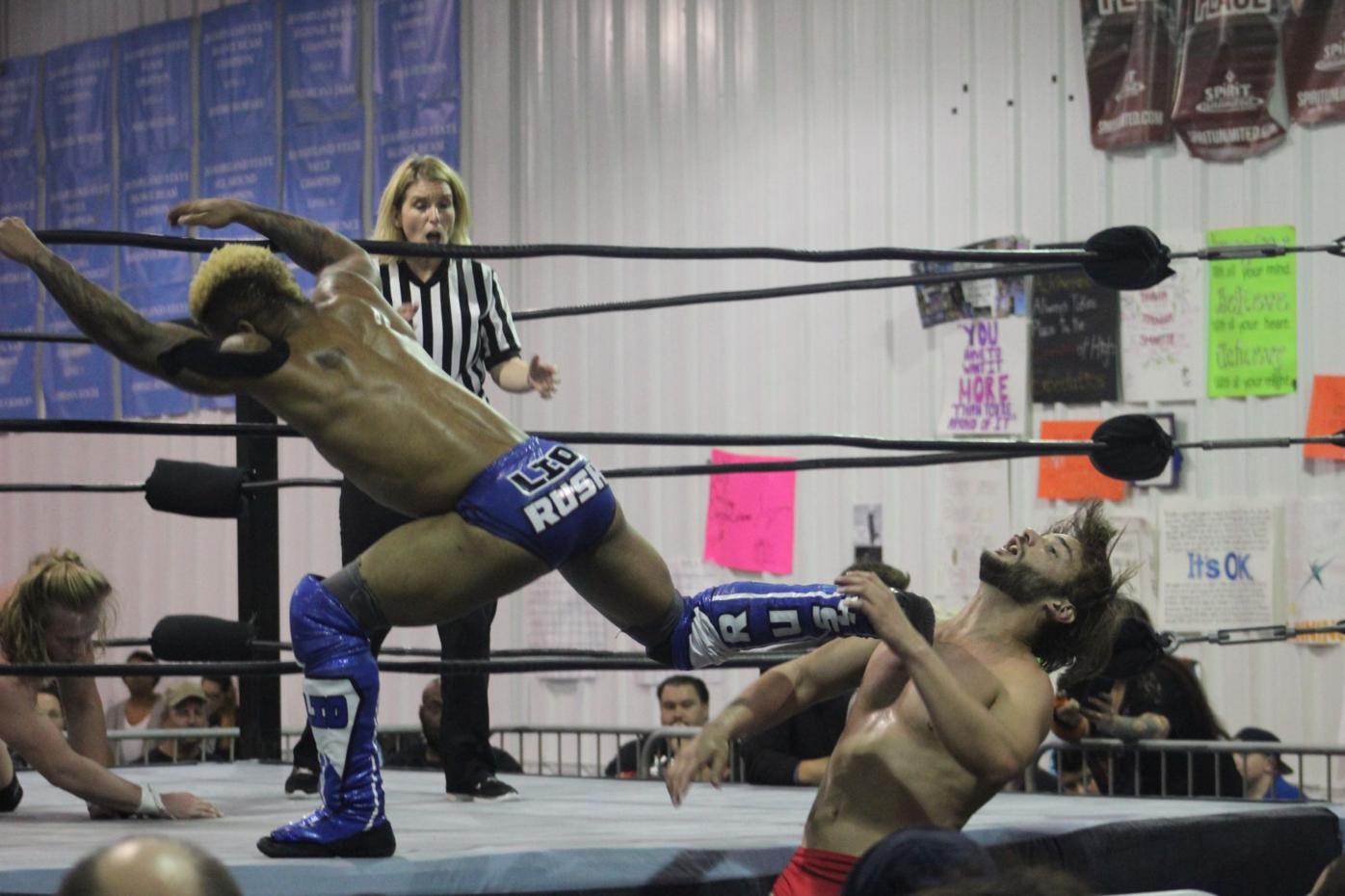 Ring of Honor’s Lio Rush delivers a kick during his match against The Dixon Line at MCW Pro Wrestling’s Autumn Armageddon event in Waldorf on Nov. 11. 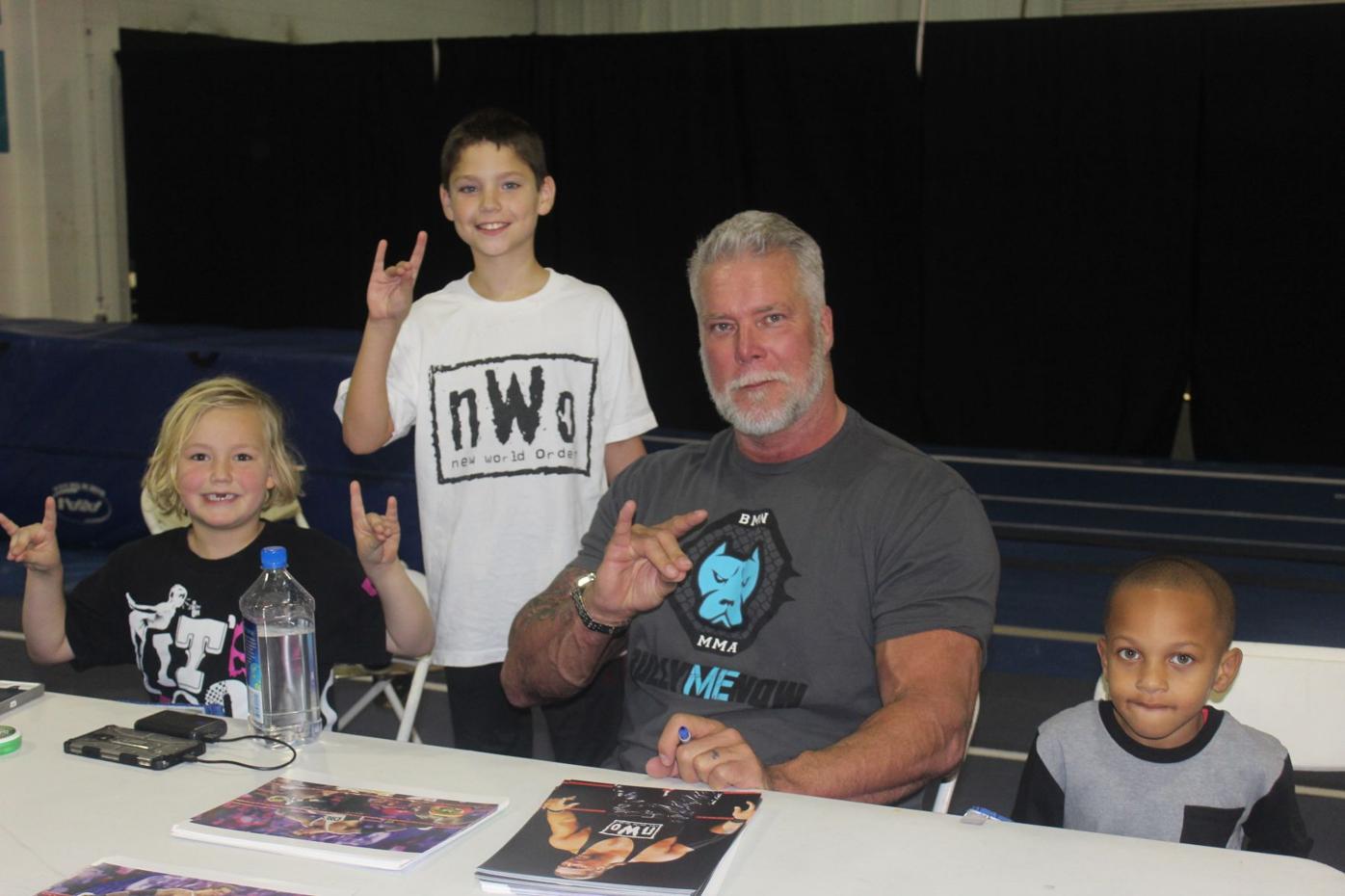 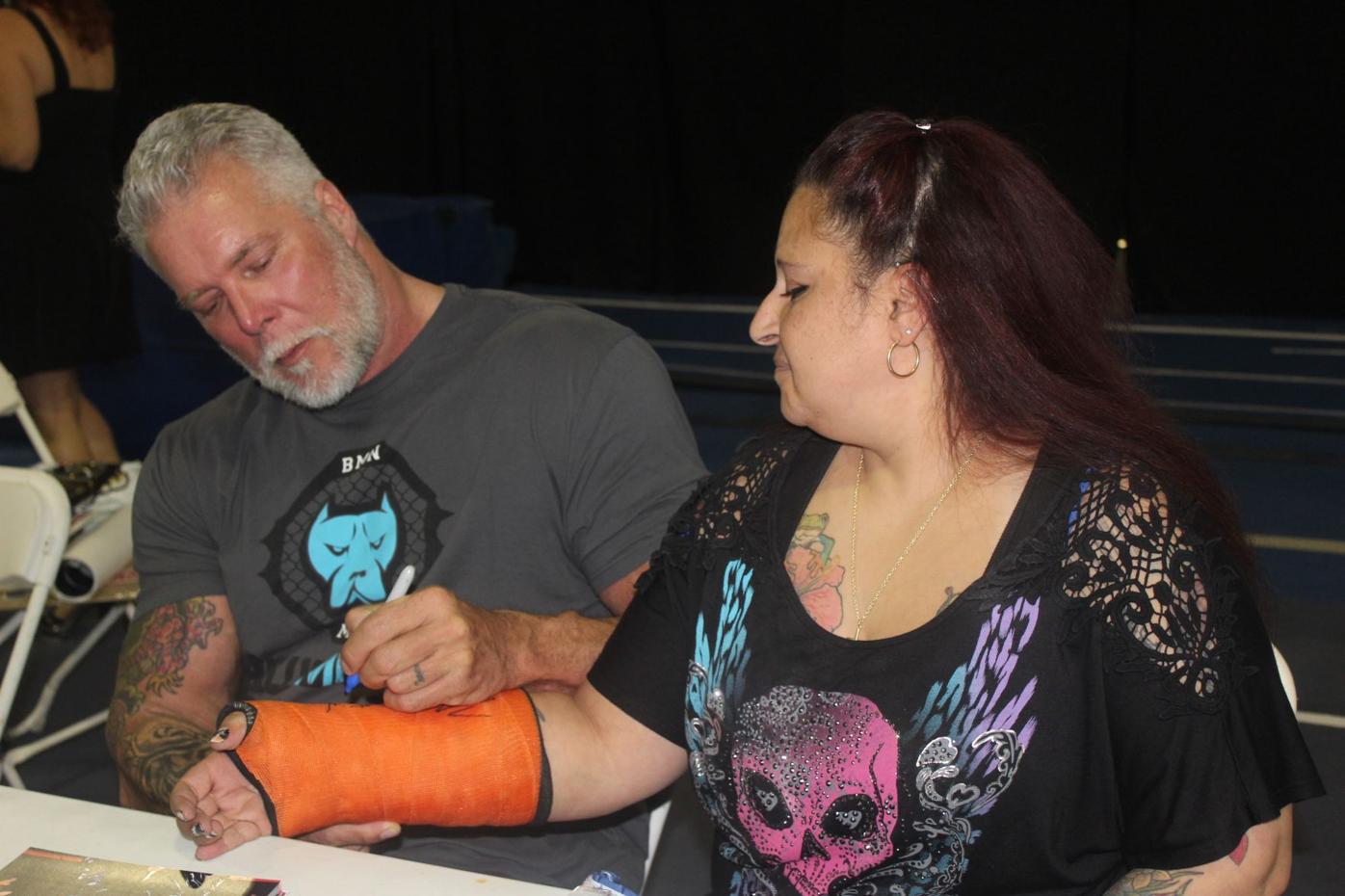 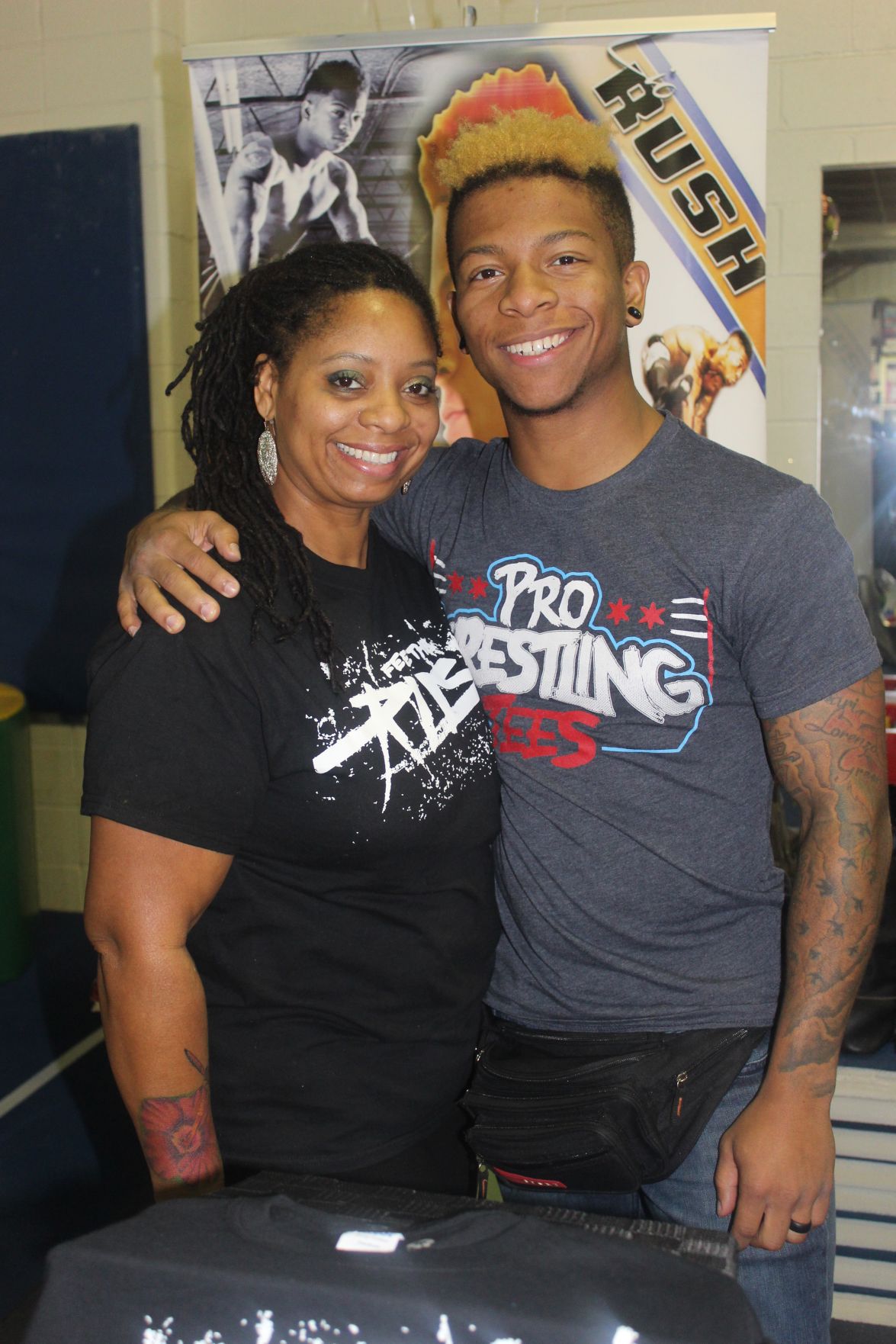 Ring of Honor wrestler Lio Rush and his mother, Leslie Green, at Autumn Armageddon in Waldorf on Nov. 11, celebrating his birthday with MCW Pro Wrestling. 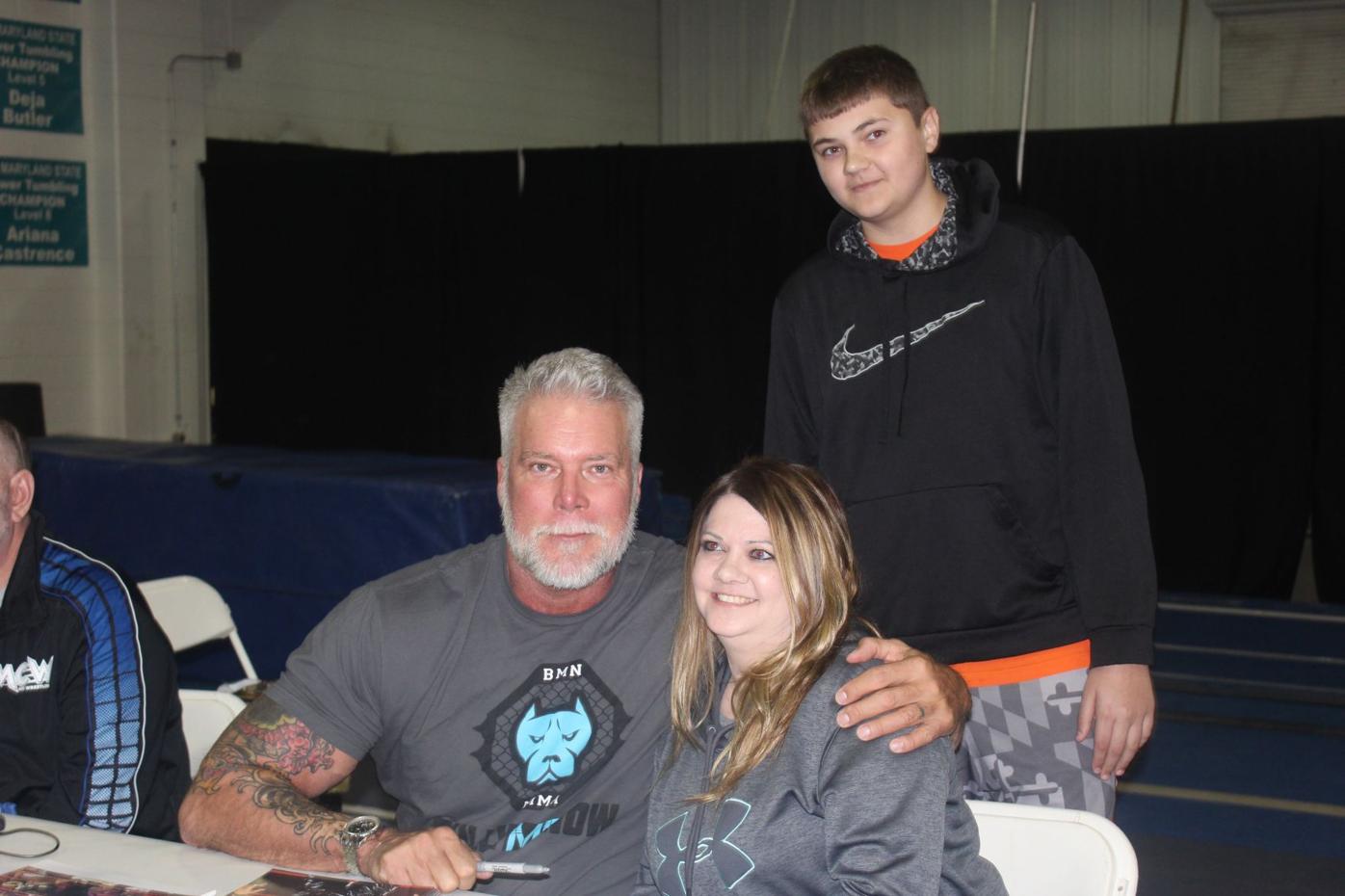 Ring of Honor’s Lio Rush delivers a kick during his match against The Dixon Line at MCW Pro Wrestling’s Autumn Armageddon event in Waldorf on Nov. 11.

Ring of Honor wrestler Lio Rush and his mother, Leslie Green, at Autumn Armageddon in Waldorf on Nov. 11, celebrating his birthday with MCW Pro Wrestling.

MCW Pro Wrestling action returned to Waldorf on Nov. 11 for the Autumn Armageddon Tour, a live wrestling match held at Unique Sports Academy that brought excited fans out to see wrestling legend Kevin Nash as well as a Waldorf street fight match that did not disappoint.

“We’ve been doing this for two years now and every time it’s getting bigger and bigger,” said Nicholas Anthony, coach at Unique Sports Academy. “Kevin Nash is a legend from when I saw him as a little kid and now kids today get to see him. He was the longest reigning champion of the ’90s, and I think him coming here means a lot to the kids. Showing the kids that this is wrestling’s past and them seeing the up-and-coming stars. When you watch the big programs on television now, some of those stars started off here with MCW. It’s nice to see them at the bottom and work their way up to the top.”

Waldorf resident Marilyn Boswell had Nash, Lio Rush from Ring of Honor and Brandon Scott from MCW sign a cast on her arm.

“It was absolutely amazing meeting [Nash],” Boswell said. “I got him to sign my cast so that I can always have it, forever and ever. I’ve always loved him throughout his whole career, even in ‘Magic Mike.’ He’s such a wonderful person and he’s so sweet. We’ve met a lot of celebrities through MCW, but he is by far the most amazing.”

It turns out the entire Boswell family are wrestling fans and they travel to all of the MCW Pro Wrestling events.

Alexis Boswell, 14, said she was blushing and almost speechless when she met her favorite wrestler, Lio Rush.

Brent Boswell Sr. and Brent Boswell Jr. said Nash is “a legend,” and they love that MCW Pro Wrestling doesn’t charge an arm and a leg to meet him.

WWE Hall of Famer Nash addressed the crowd and thanked everyone for coming to the event.

“This is my first year of retirement and without a wrestling match,” Nash said. “I made my mind up that Jan. 1 was going to be the end. I’m pretty beat up, but my body is feeling better.”

Many know Nash from his wrestling career with WCW (World Championship Wrestling), TNA (Total Nonstop Action Wrestling) and the WWF (World Wrestling Federation), winning 21 championships in total. He is also one of the three founding members of the New World Order (NWO), along with Hulk Hogan and Scott Hall. Nash is also known for his acting roles in “Magic Mike,” “Magic Mike XXL,” “The Longest Yard” and “John Wick.”

“When you’re going from town to town, doing 300 towns a year, you don’t have much fan interaction,” Nash said. “Now this past year I’ve done a lot of signings and appearances and it’s nice to know that all of the 27 years that I’ve been in the industry have been appreciated.”

Nash has a one-of-a-kind personality that endears him to his fans. The Detroit native played basketball in Europe and lived overseas for four years. He served his country by enlisting in the 202nd Military Police Company in Germany before beginning his wrestling career. Lately, Nash has been keeping busy wth his acting career.

“I just shot a horror film called ‘Anders Manor’ and I’ve got a thriller movie called ‘The Bend’ that I’ll be shooting probably in about a month and half,” Nash said. “I’m out every weekend at a convention or a signing. I’m used to being on the road, so I feel stir crazy if I’m home for too long.”

Nash said MCW does a really good job of bringing wrestling entertainment to the fans and giving wrestlers a start on their careers. He said it’s always a big crowd at an MCW event, and it’s a well-run independent promotion.

“I’ve seen so many talented guys at this level that couldn’t make that next step,” Nash said. “They get career-ending injuries. These new wrestlers should not take their body for granted.”

Some of the main card matches that night included MCW Tag Team champions The Ecktourage retained over Bruiser and Rayo, leaving Rayo injured. The Dixon Line defeated Jason Kincaid and Lio Rush, and in a Waldorf street fight where anything goes, champion Drolix retained over Sean Studd for the MCW Pro Wrestling Heavyweight Title. After a night of intense matches, the crowd sang “Happy Birthday” to Lio Rush and congratulated him on his success.